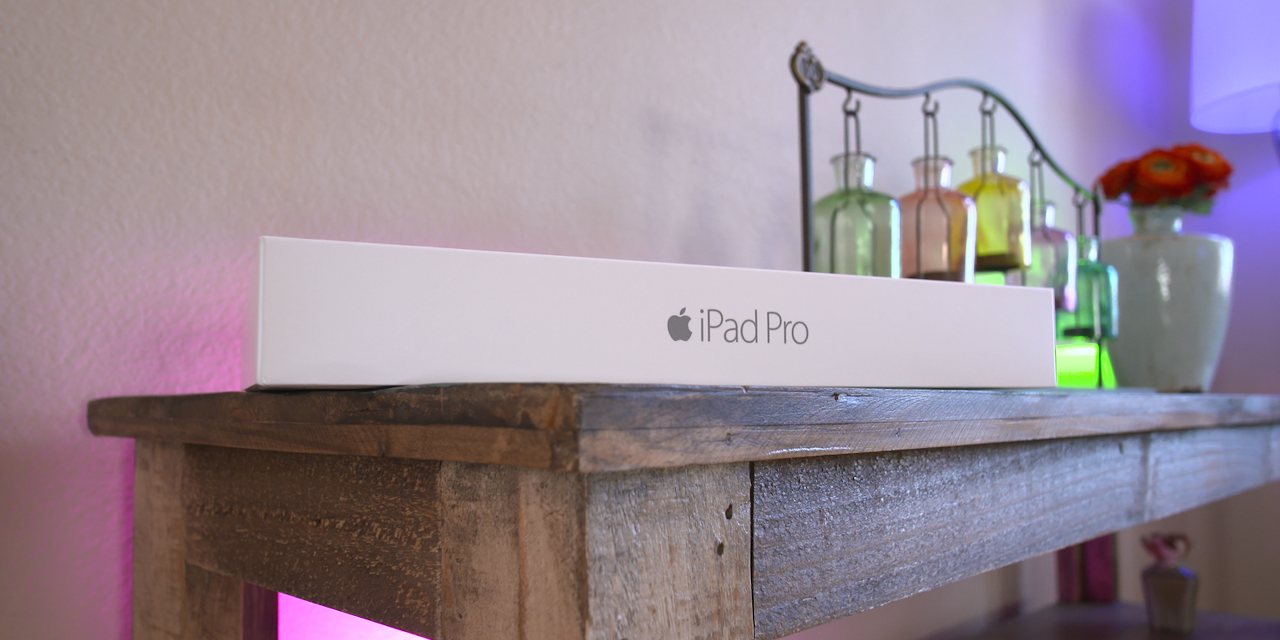 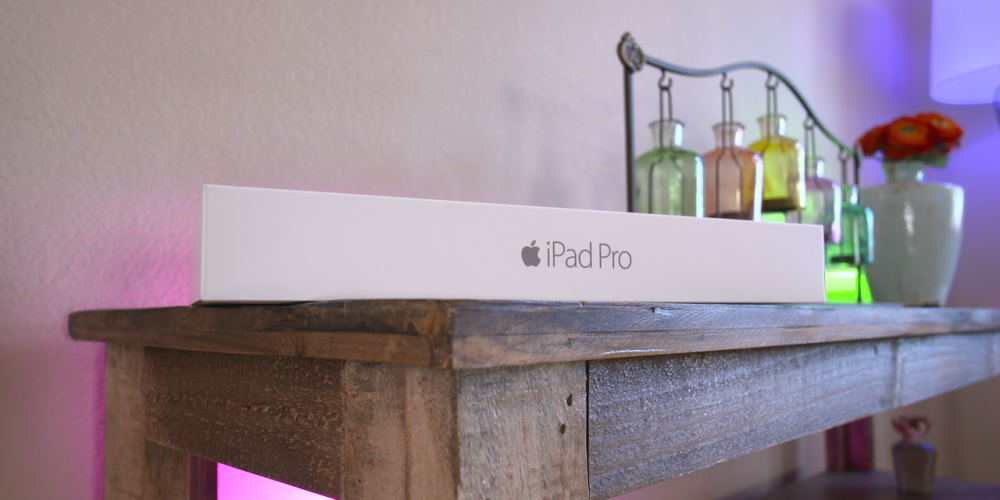 Today we’re taking a look at the iPad Pro. On the surface, it may look like a giant Netflix machine, but well… it kind of is. This is the biggest iPad ever without a doubt, that packs a 12.9-inch display and obviously has a much larger footprint when compared to the iPad Air 2, this is larger by 78 percent actually. But enough with the small talk, let’s take a look inside of the box..,

Check out our iPad Pro unboxing and impressions video below:

The display is pretty clean as well. It’s obviously not as pixel dense as some of the smartphones we look at, but it’s on point with a Retina MacBook Pro. The technology for the display makes it extremely power efficient as well, at least according to Apple. The display features a variable refresh rate that can detect when the content on it is static. From there is drops the refresh rate from 60 to 30 in order to save power.

Taking a look at design, this thing is massive. Like really big. Luckily, it’s not as thick as it is big. It comes in at just 6.9mm and weighs 1.57 pounds, which isn’t too bad at all. Along the bottom end, you’ll find a Lightning port for charging, and surprisingly here, Apple has implemented four side-firing speakers inside of the iPad Pro (2 on each end) for a rich multimedia experience. 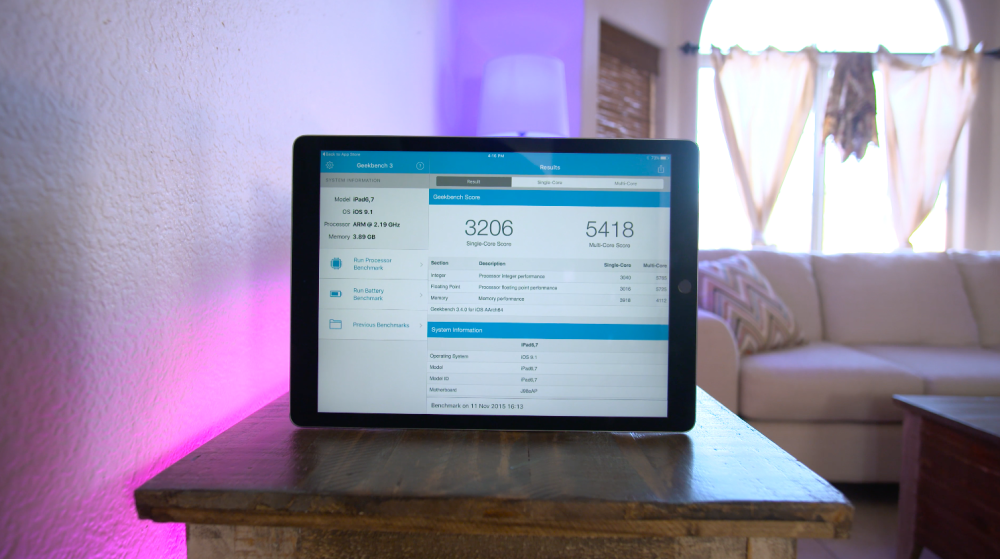 On one side you’ll find the volume buttons and a couple of microphones, while the other is home to Apple’s new Smart Connector, which can be used for accessories like the new Smart Keyboard, which is actually not available to ship immediately at launch, but third-party manufacturers like Logitech have swooped in to save the day. And if you really want to be that guy, there’s an 8-megapixel camera on the backside, capable of up to 1080p video recording. Trust me though, you don’t want to be that guy. Also, around the front, there’s a 1.2-megapixel camera, making it great option for Skype and FaceTime calls. 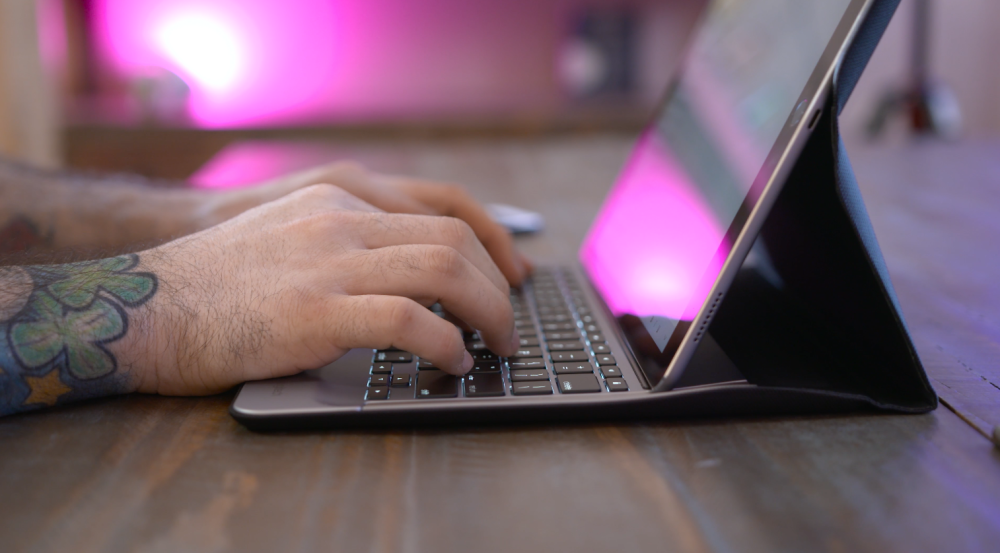 So basically, when the iPad Pro’s Smart Connector makes contact with a supported accessory like Logitech’s CREATE keyboard case, it powers and charges the keyboard so you’ll never have to worry about that. Pretty neat feature in my opinion and also one of the things that makes the iPad Pro a bit different than the other models. And obviously because the iPad Pro is so large, a keyboard case like this will actually have full-size keys, which is miles better than typing on something cramped in a smaller form factor. 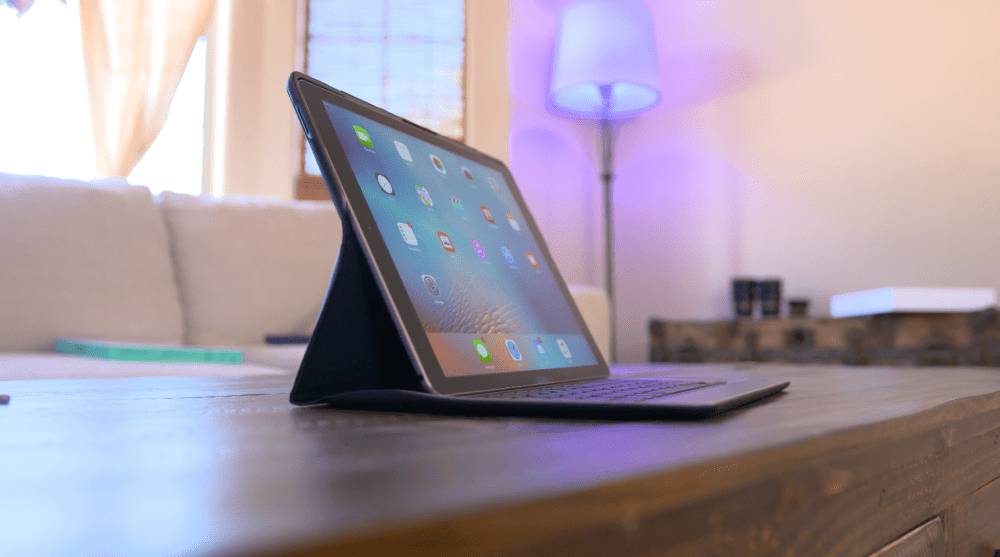 Apple also makes the iPad Pro useful for a wide variety of other people with Apple Pencil, and I’d love to share my experience about this with you, but unfortunately this too was not available to ship instantly at launch.

I think the iPad Pro is a nice idea overall, but the main issue here is that it runs iOS instead of something that may be a bit more useful to “professionals” like you know.. maybe OS X? The truth is, that even Microsoft’s Surface may appeal to anyone looking to get more out of productivity than iOS has to offer, but that doesn’t make this a bad product. Having laptop-like screen real estate in a tablet form-factor is a nice thing. Especially when paired with a full size keyboard. Drop in the rich multitasking found in iOS 9 and you’ve got something that can definitely appeal to a lot of people. And you know what? Sometimes folks just don’t want to deal with a desktop operating system. 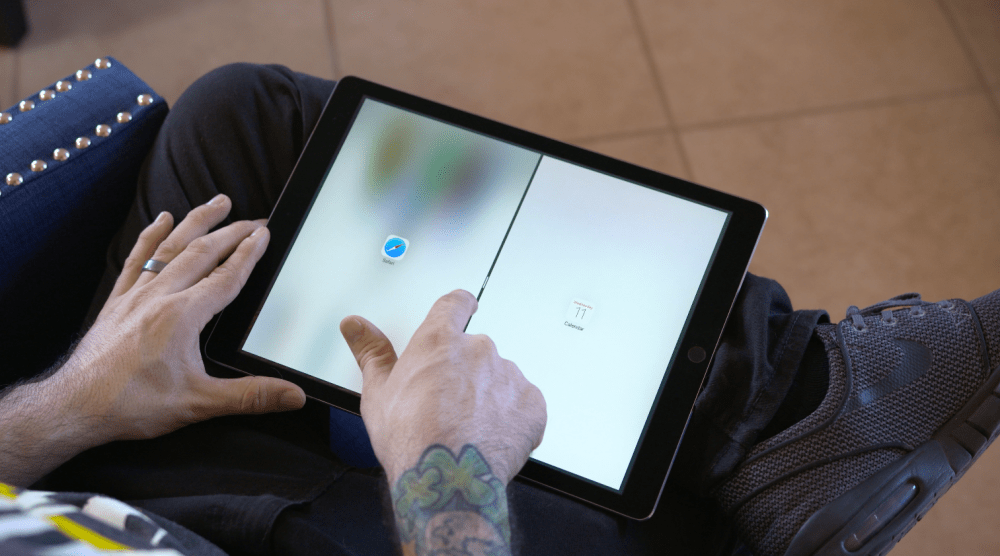 For me, the iPad Pro feels pretty well-built and obviously the quality is on point with what you’d expect from Apple. That being said, it’ll take me some time to figure out whether or not this huge tablet is something I need in my life, but I’ll definitely give it a shot. What do you think about the iPad Pro? Did you pick one up?