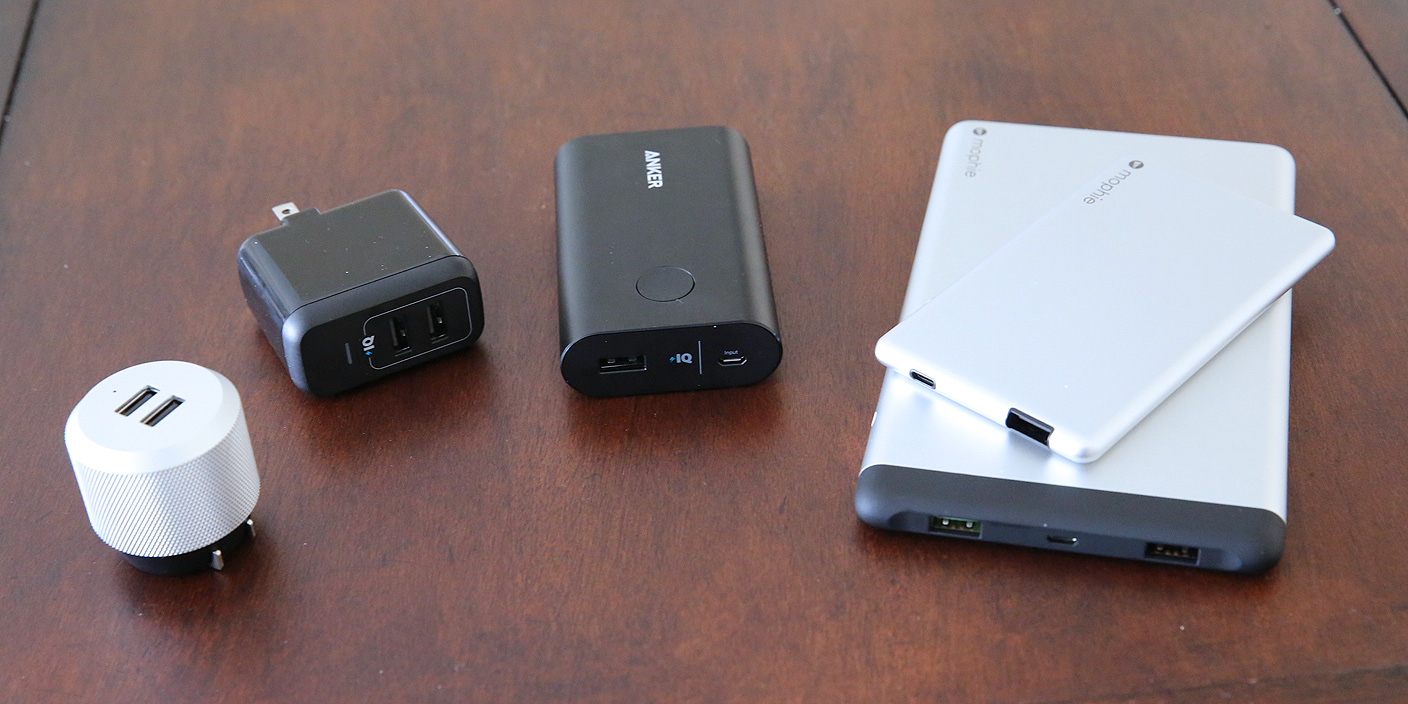 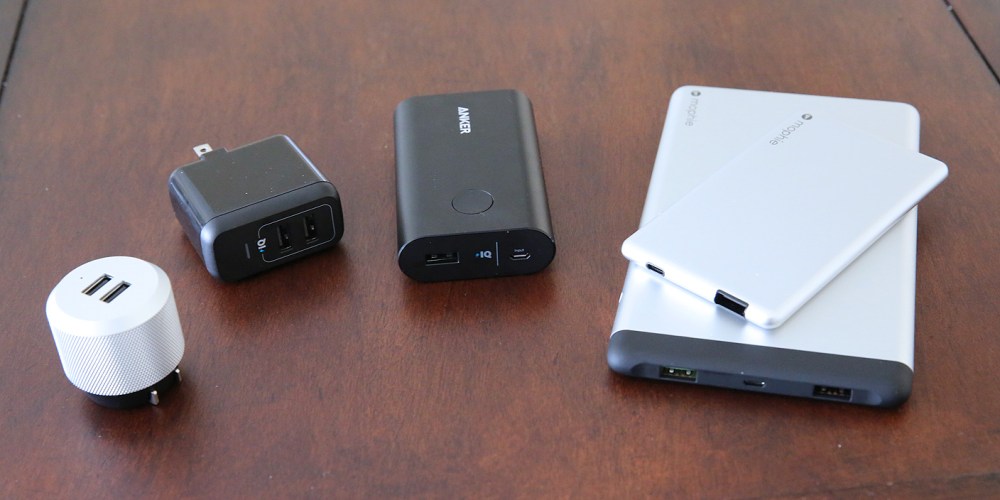 Several brand-new iPad and iPhone accessories I’ve been testing recently aren’t necessarily worthy of full standalone reviews, but because they come from some of our readers’ and editors’ favorite companies, they’re still worth knowing about. Four of the five are sequels to prior products I’ve covered, while one is totally new — though similar to an earlier design. 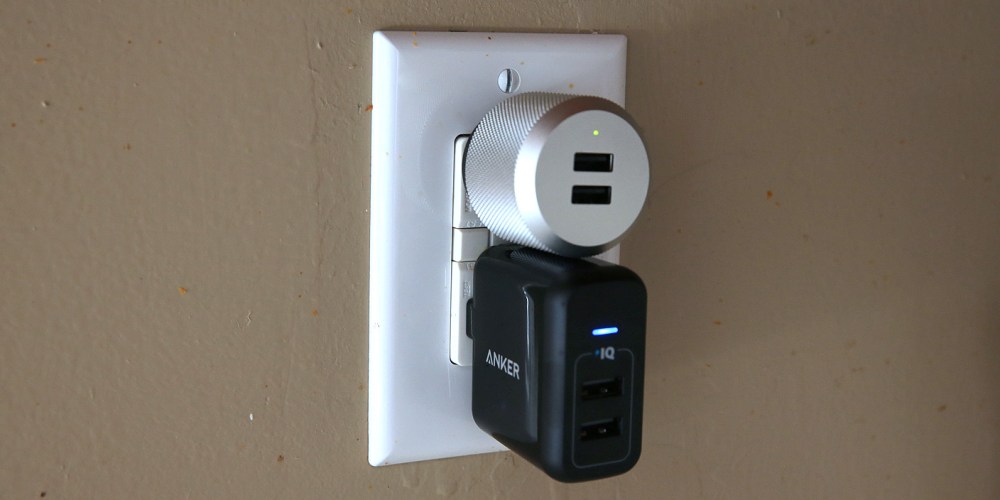 Even though wall chargers have nearly become commodities, trusting your iPad or iPhone to safely recharge using a no-name alternative or counterfeit Apple charger is a bad idea. Obviously, some companies make better chargers than others, and in rare cases, you’ll get even better results than using Apple’s own solutions. Anker’s PowerPort 2 ($14) and Just Mobile’s AluPlug ($30) are prime examples. 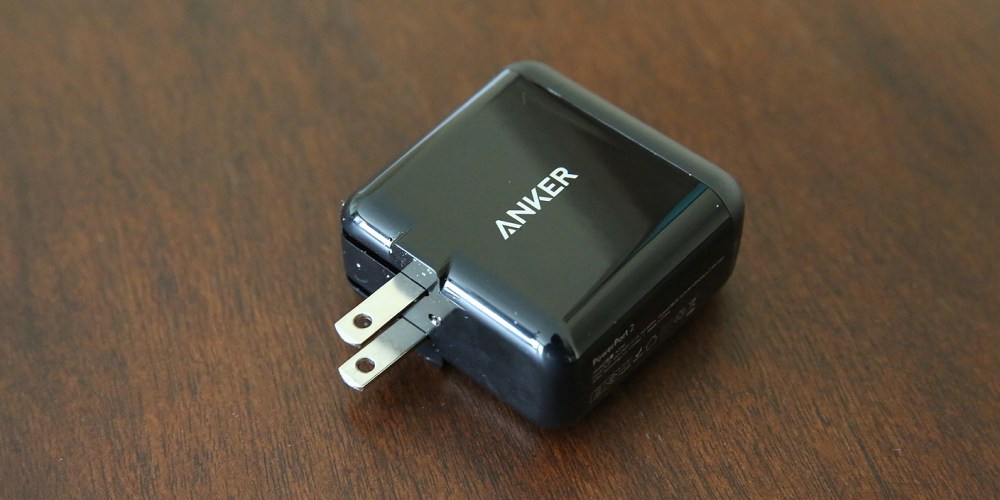 PowerPort 2 packs the power of two Apple iPad 12W USB Power Adapters into a single black or white power cube that’s only a little larger than one Apple charger: roughly 2.25″ by 2.1″ by 1.1″. It’s matte- finished plastic on the end with two USB ports, and glossy everywhere else, including the side with folding wall blades. When plugged in, a blue light glows to show it has adequate wall power, changing to green to indicate fast charging. During testing, I had no issue charging one or two Apple devices at full speeds, ranging from the iPad Air 1 and iPad Air 2 to the iPad Pro, iPhone 6, and iPhone 6s Plus. The performance was great, and for $5 less than an Apple single-port wall adapter, it’s certainly a great deal. 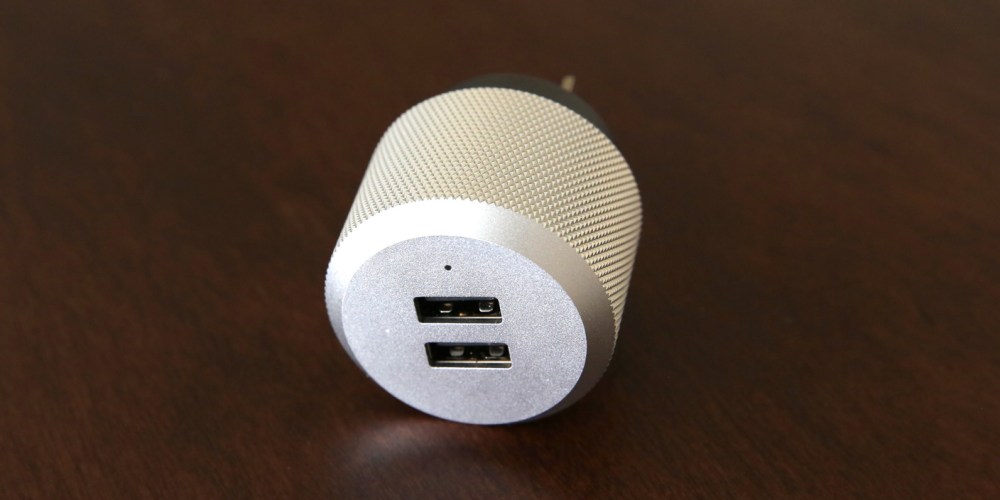 I’ve liked Just Mobile’s accessories for years, and was one of the earliest fans of the Highway series of car chargers when they debuted — the company took a commodity car charger and used aluminum to make it match the interiors of nicer cars. AluPlug is basically an upgraded Highway Max car charger in wall adapter form: twin 2.4-Amp USB ports sit underneath a small green power light, surrounded by a silver, diamond-cut aluminum barrel and a black plastic base. Even if the internals are basically the same as Anker’s PowerPort 2, AluPlug’s circular shape is very unique by wall charger standards. During my testing, it worked without problems to charge the same iPads and iPhones mentioned above, and looked nice doing so. 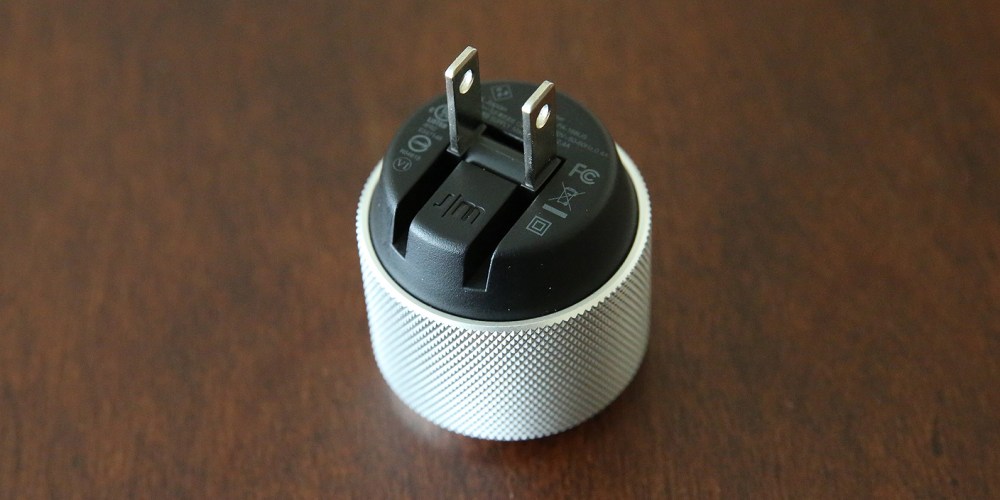 The question is really whether you care how your wall adapter looks enough to spend $30 on it. Just Mobile’s publicity shots show AluPlug on a wall next to an iMac — a cool visual — but most wall adapters will be closer to ankle level and out of sight. I really like AluPlug’s design, but I’m not sure that I’d pay a premium for cosmetics unless I had a very visible location where USB power was necessary, and the silver and black color combination looked right. If that describes a location in your home or office, don’t hesitate to consider it; otherwise, you’ll be fine with a less expensive option such as PowerPort 2. 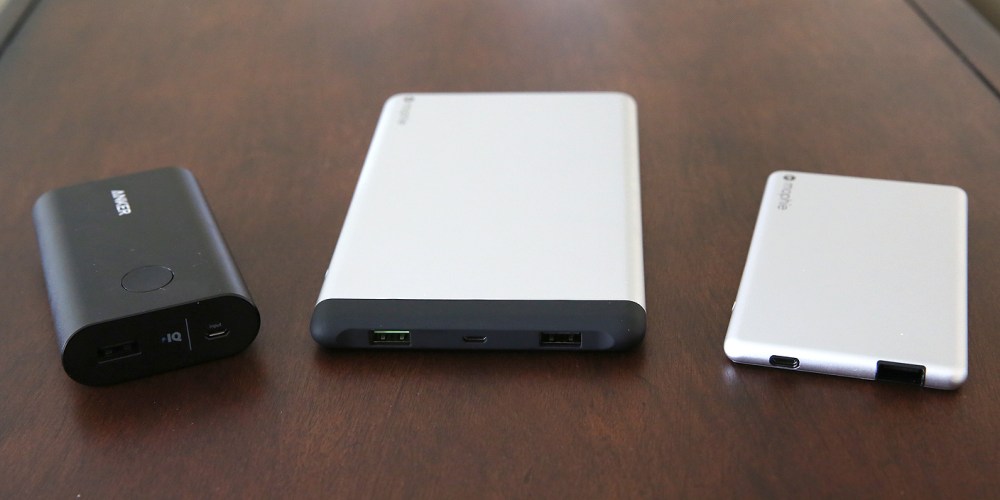 When it comes to batteries and other power accessories, Anker so dominates the “performance for the dollar” equation that no one — even a well-established rival such as Mophie — can touch Anker’s combination of power and pricing. Earlier this month, I reviewed Anker’s PowerCore+ 20100, which currently sells for only $60 and can fully recharge an iPad Pro or 12″ MacBook with energy to spare. It turns out that Anker also has a version called PowerCore+ 10050 ($33), which has a single USB port and half the capacity, but the same circular 10-light remaining power indicator and anodized aluminum body, bundled with a mesh carrying case and micro-USB charging cable. Only 3.8″ long by 2.4″ by 0.9″, it looks just like the larger version, only with roughly half the length. Anker claims that it’s the smallest 10,000mAh battery on the market, and that’s probably right. 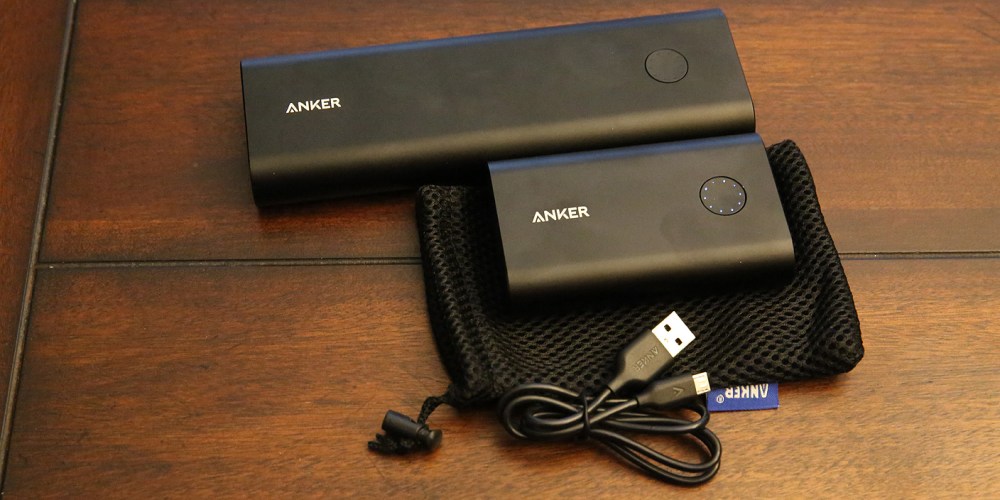 The good news with PowerCore+ 10050 is that it has enough battery capacity to refuel any iPhone (including the iPhone 6/6s Plus) twice, and almost any iPad once. In my test with the huge, power-hungry iPad Pro, I was able to go from dead to 70% recharged before PowerCore 10050 expired. On the other hand, this PowerCore+ ran slower than expected, taking six hours for that 70% charge. Anker claims that it’s 2.4-Amp capable, and supports Qualcomm Quick Charge 2.0 for non-Apple device charging, but the speeds I saw with the iPad Pro suggest it’s best used with iPhones and smaller iPads that tap out at 1-Amp or 2.1-Amp speeds. For these models, the capacity and $33 asking price will be highly compelling. 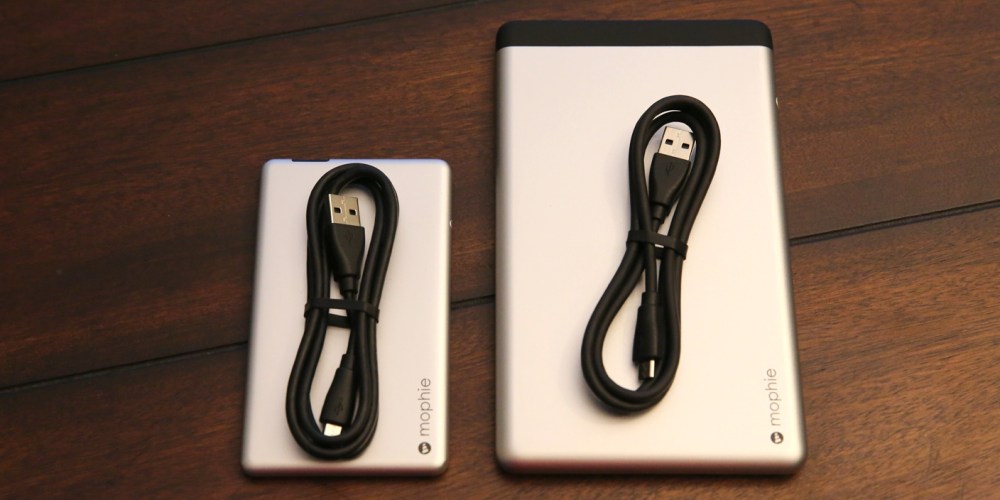 Mophie’s “new” Powerstation 2X ($60) and Powerstation 8X ($150) are just two of the company’s lineup of five just-released sequels to earlier, same-named Powerstations — a point that will cause some confusion if you try to search for them. Completely redesigned to emphasize thinness, the all-aluminum Powerstation 2X has a footprint that’s closer to an iPhone or iPod touch than ever before, while the aluminum and plastic Powerstation 8X looks like a giant-sized version of the first-generation iPhone. Each has a 4-LED power indicator and button on a long edge, with a micro-USB recharging port and full-sized USB output port on a short edge; 8X also has a second full-sized USB port with green markings within its black plastic end cap, indicating support for Qualcomm Quick Charge 2.0 with non-Apple devices. Both Powerstations promise at least 2.4A output, while recharging at under 2A. 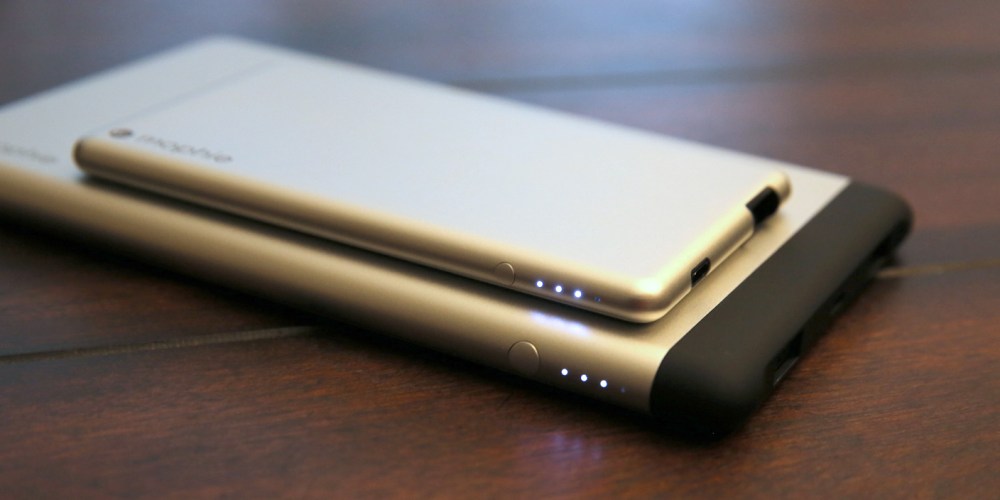 The new Powerstations’ names (1X, 2X, 3X, 5X, and 8X) are supposed to differentiate them from each other and roughly indicate how much “extra battery” they will give to connected devices, but since the sizes and power needs of devices vary so much these days, the “X” ratings aren’t really useful. The math is also a little fuzzy; each X is supposed to be 2,000mAh of battery capacity, such that Mophie’s 2X battery has 4,000mAh of power, but the 8X has a 15,000mAh battery, so it’s more like 7.5X.

Notably, the 8X version ships with Bluetooth, so if you download Mophie’s free Power app, you can get more detailed information on the battery’s current power level, and receive battery status notifications. There’s also a fringe benefit: if you have an Apple Watch, you can receive a “fully charged” notification on your wrist when your iPhone’s done recharging. These features strike me as nice, but non-essential, and not things I would use with frequency. Additionally, the Power app is only formatted for the iPhone, and I couldn’t it to install on the iPad Pro — something Mophie will certainly correct soon. 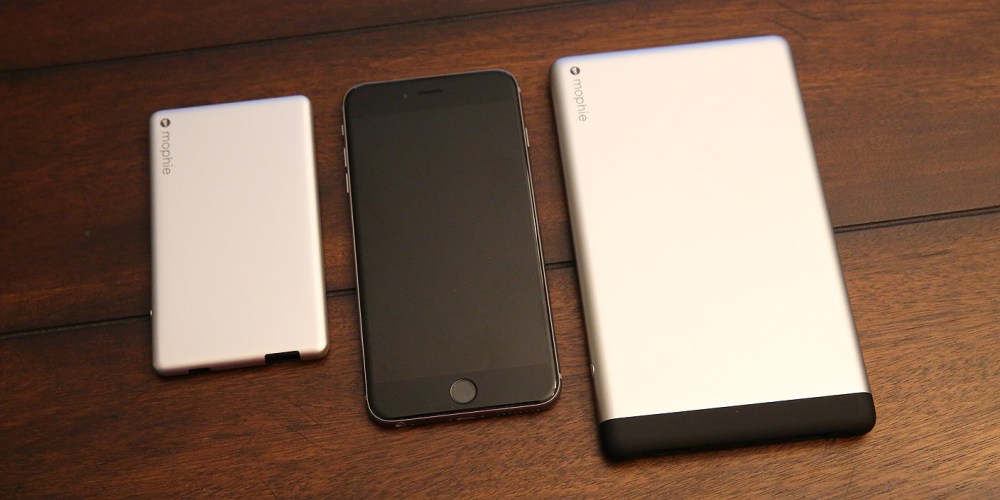 In my testing, Powerstation 2X was able to deliver a 111% recharge to the iPhone 6s Plus, taking it from dead to 100%, then an additional 11% after a partial discharge. That’s not quite “2x,” but on par with other 4,000mAh external batteries I’ve tested. By comparison, Powerstation 8X was able to deliver a 166% recharge to an iPad Air 2 using the same dead-to-full, then partial discharge test. That’s good, though not close to the performance of much less expensive Anker ultra-high-capacity batteries such as Astro E7. Apart from the value of Mophie’s brand name, the reason to prefer a Powerstation instead is thinness: unlike the Anker models, even the Powerstation 8X is only 0.48″ thick — about the thickness of an iPhone 6/6s Plus in a case — and 2X is closer to a bare iPhone 6/6s. As of press time, both of the new Powerstations are on a temporary sale through Mophie, making them more price competitive, so if you’re interested in grabbing either one of them, act quickly.