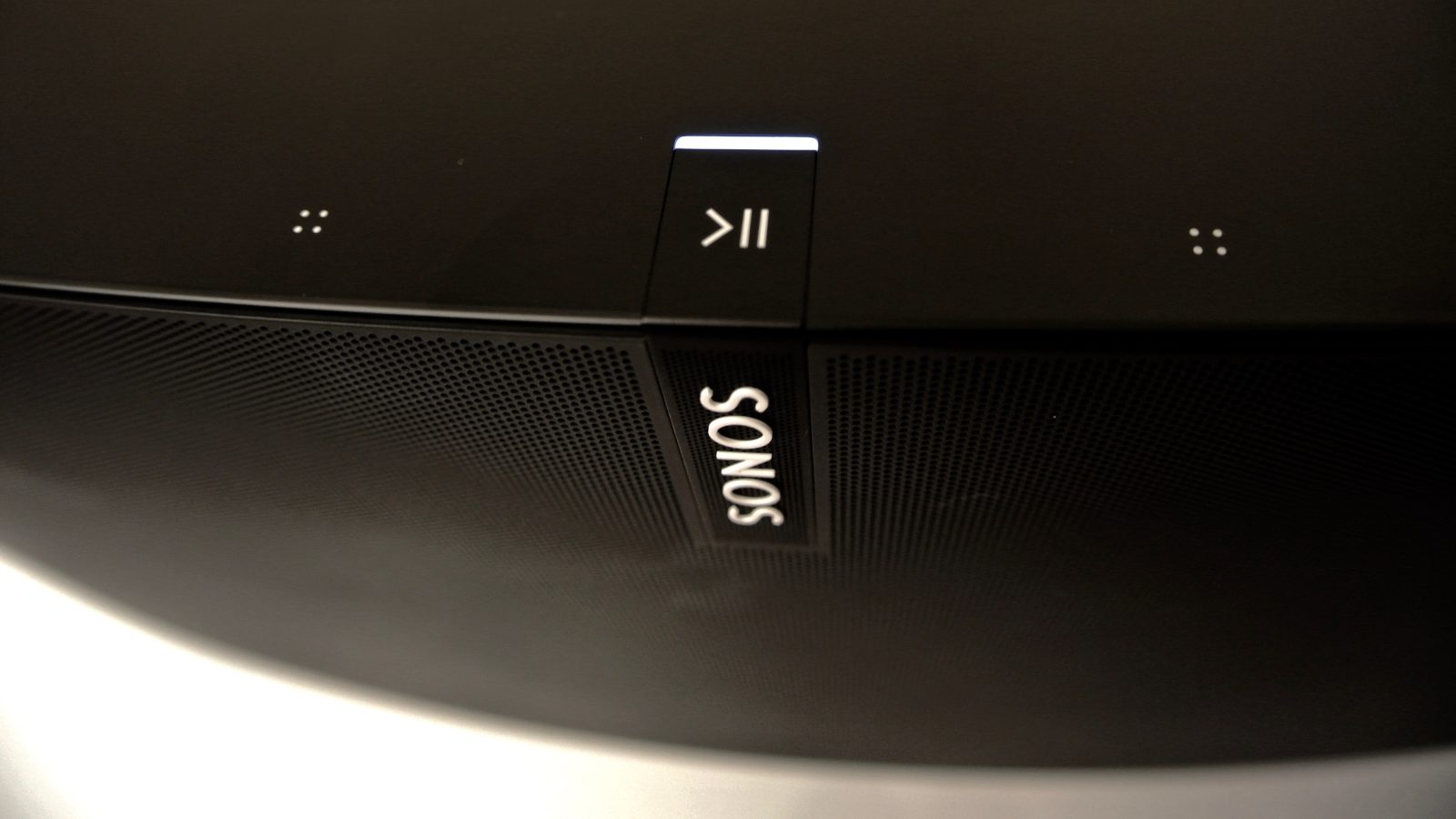 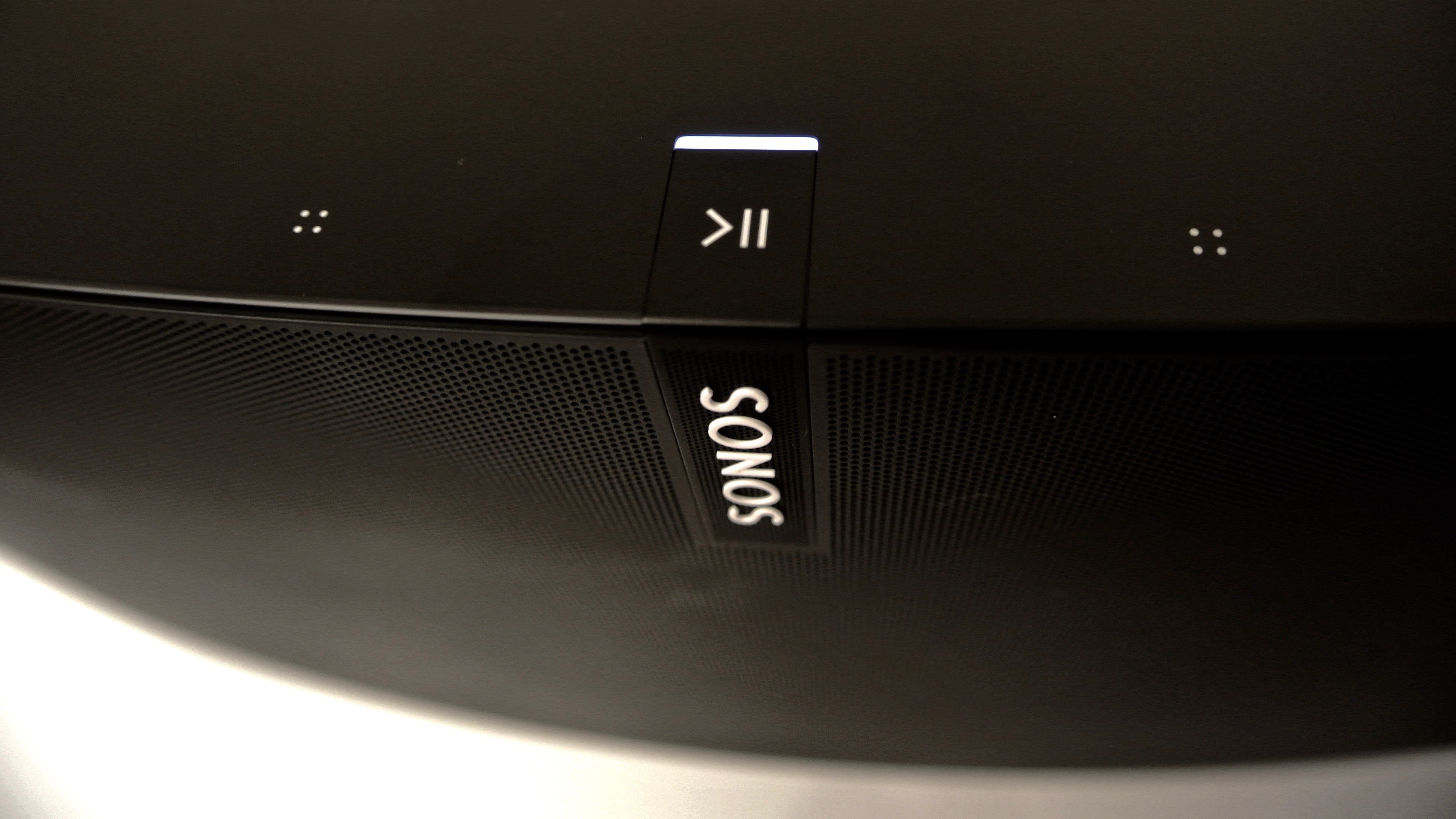 A couple of months ago we took an in-depth preview look at the Sonos Play:5 all-in-one wireless speaker ahead of its release as the company unveiled its new Trueplay speaker tuning feature. The new Sonos Play:5 (2nd gen, $499) has since launched in stores and Apple Music streaming will be supported from December 15th. I’ve spent a few weeks testing a pair of new Play:5 speakers to see how it performs. The short answer is that it delivers on its promise of providing premium sound, but here’s how it compares to the cheaper Sonos Play:1 ($199) and mid-sized Sonos Play:3 ($299): 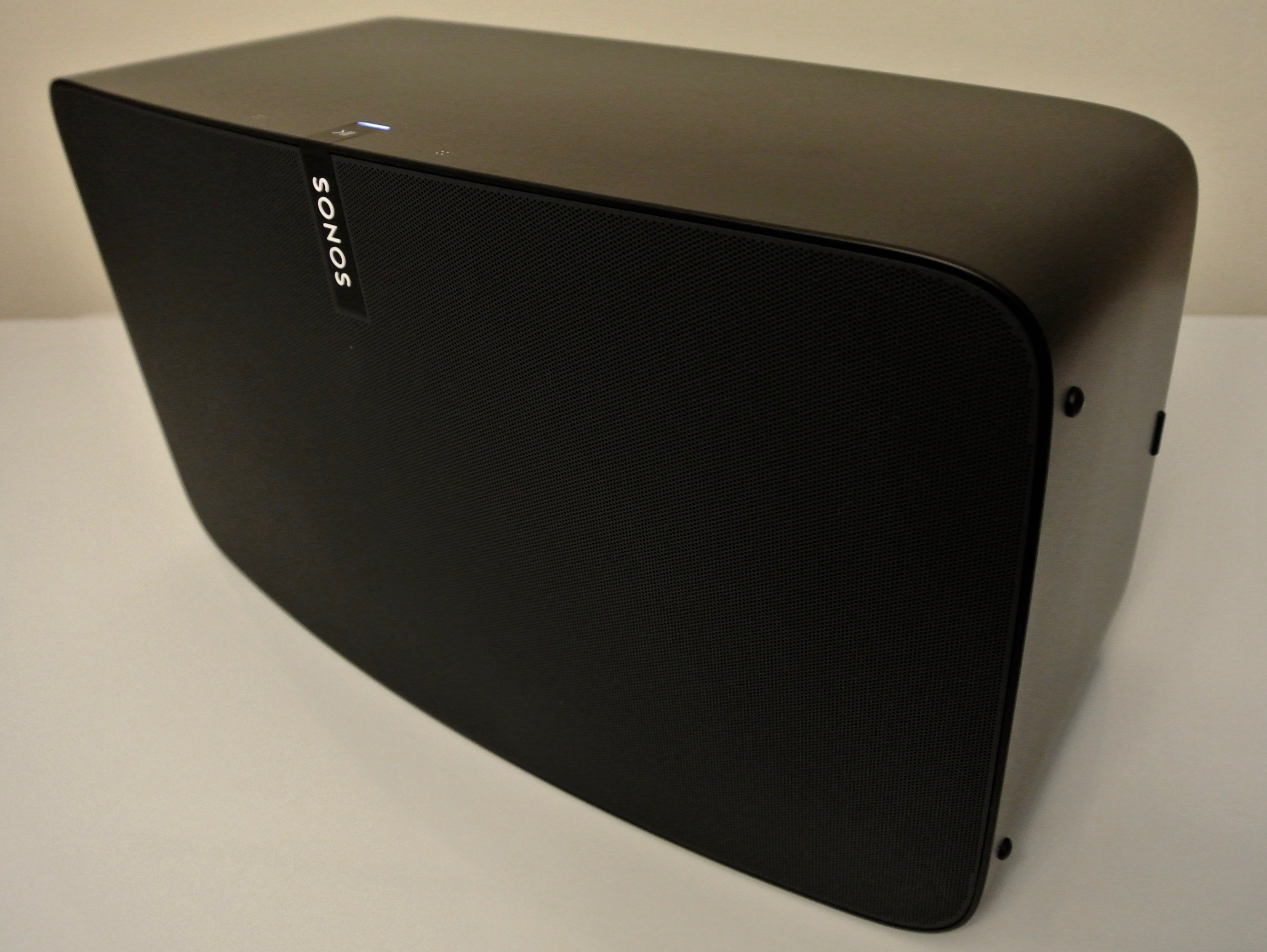 At 14 pounds and 8.03 x 14.33 x 6.06 inches, the new Sonos Play:5 all-in-one speaker isn’t gigantic, but it’s certainly not as small as the cheaper Play:1 and Play:3 all-in-one units also in the lineup. Play:5 is still portable, though, and with the bigger build comes louder sound through six Class-D digital amplifiers.

Play:5 comes in two colors: traditional sound system full black or iPod HiFi-like white with a great black grill. Wired connections include one 3.5mm line-in port, a 10/100Mbps Ethernet port, and a power supply out of the back.

The setup process is fairly simple and will be familiar to current Sonos users. Connect Play:5 to power, launch the Sonos Controller app, and follow the prompts to add a new speaker. This requires pressing a couple of buttons on the unit, then you’re off to the races. Optionally, you can setup Trueplay with Play:5 to optimize the sound performance for the speaker’s placement in the room; naturally, you’ll want to repeat this process if you move the unit from its location during Trueplay setup.

From the Sonos Controller app for iPhone, iPad, Mac, Android, and Windows, you can play audio directly to Play:5 from streaming services including Apple Music*, Spotify, Google Play Music, Amazon Music, Pandora Radio, Tidal, and more. You can also playback DRM-free tracks from your device as well as locally downloaded podcasts wirelessly.

Like other Sonos systems, Play:5 lacks Bluetooth and AirPlay support without connecting devices like Apple’s AirPort Express or Bluetooth receivers over line-in. For most Sonos users, however, Apple Music support through the Sonos Controller app will likely satisfy the ‘what to play?’ problem. Beta support is rolling out from December 15th, with wider support in early 2016. 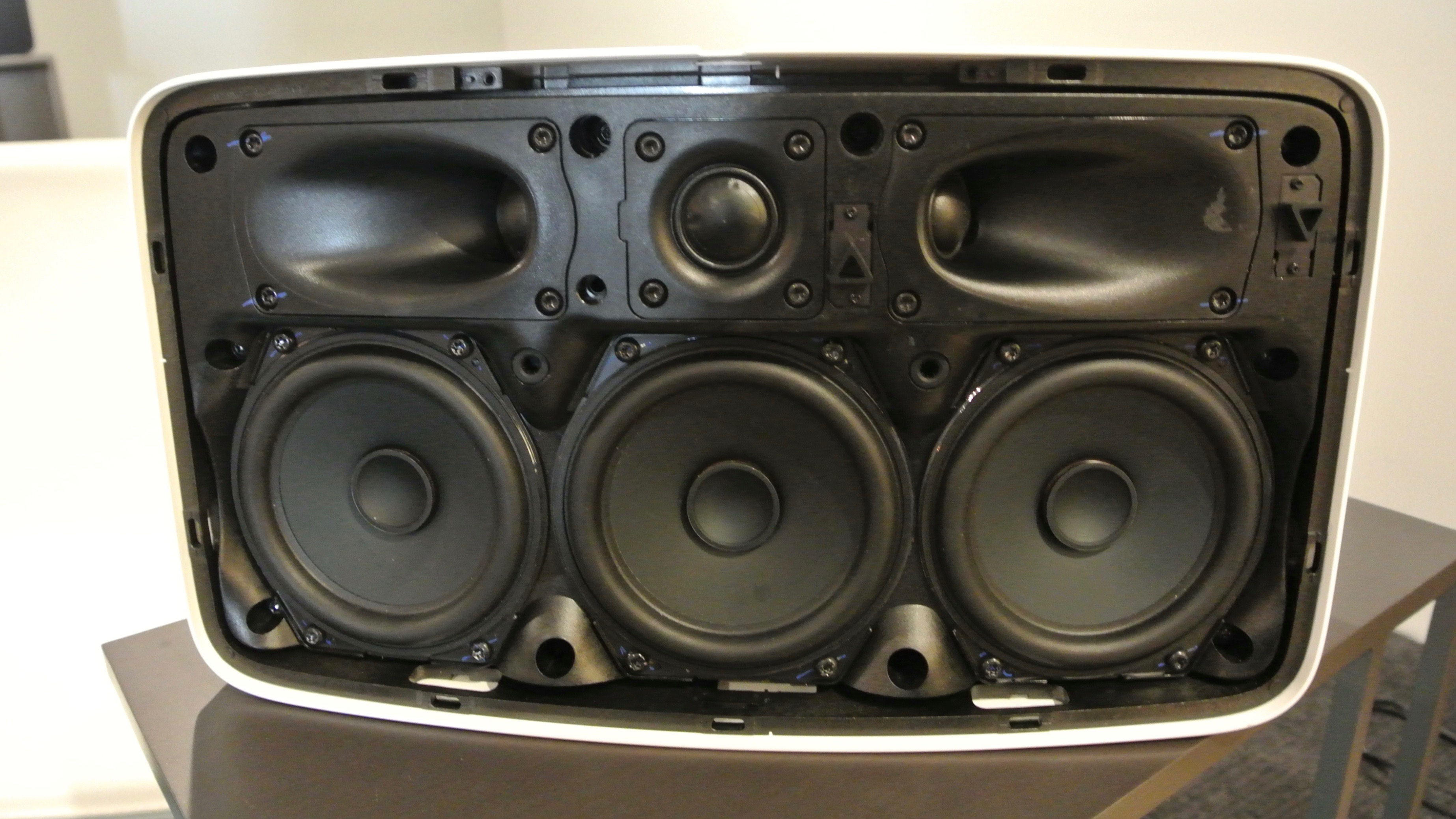 Underneath Play:5’s grill you’ll find six Class-D amplifiers that amount to a whole lot of speaker. Specifically, three mid-woofers make up the lower half to push both mid-range and deep bass sounds forward; no back ventilation to throw low-range sounds back, but Trueplay effectively balances bass-heavy tracks even with tricky speaker placement. Play:5’s top half packs three tweeters for high-end tones, but unlike the mid-woofers each of these is angled in its own direction. An embedded microphone can be found along the top center, but at launch is not used for any shipping features just yet.

That compares to the original Play:5’s single woofer, two mid-woofers, and two tweeters. The old Play:5 from 2009, which has since been discontinued but can be found second-hand, was also slightly smaller at 8.5 x 14.4 x 4.8 inches and 9.15 pounds. While the first Play:5 stuck around for six years, current Sonos customers are likely considering adding the new Play:5 to a multi-room setup versus weighing replacing old Play:5 units since that’s much of the appeal of Sonos systems. 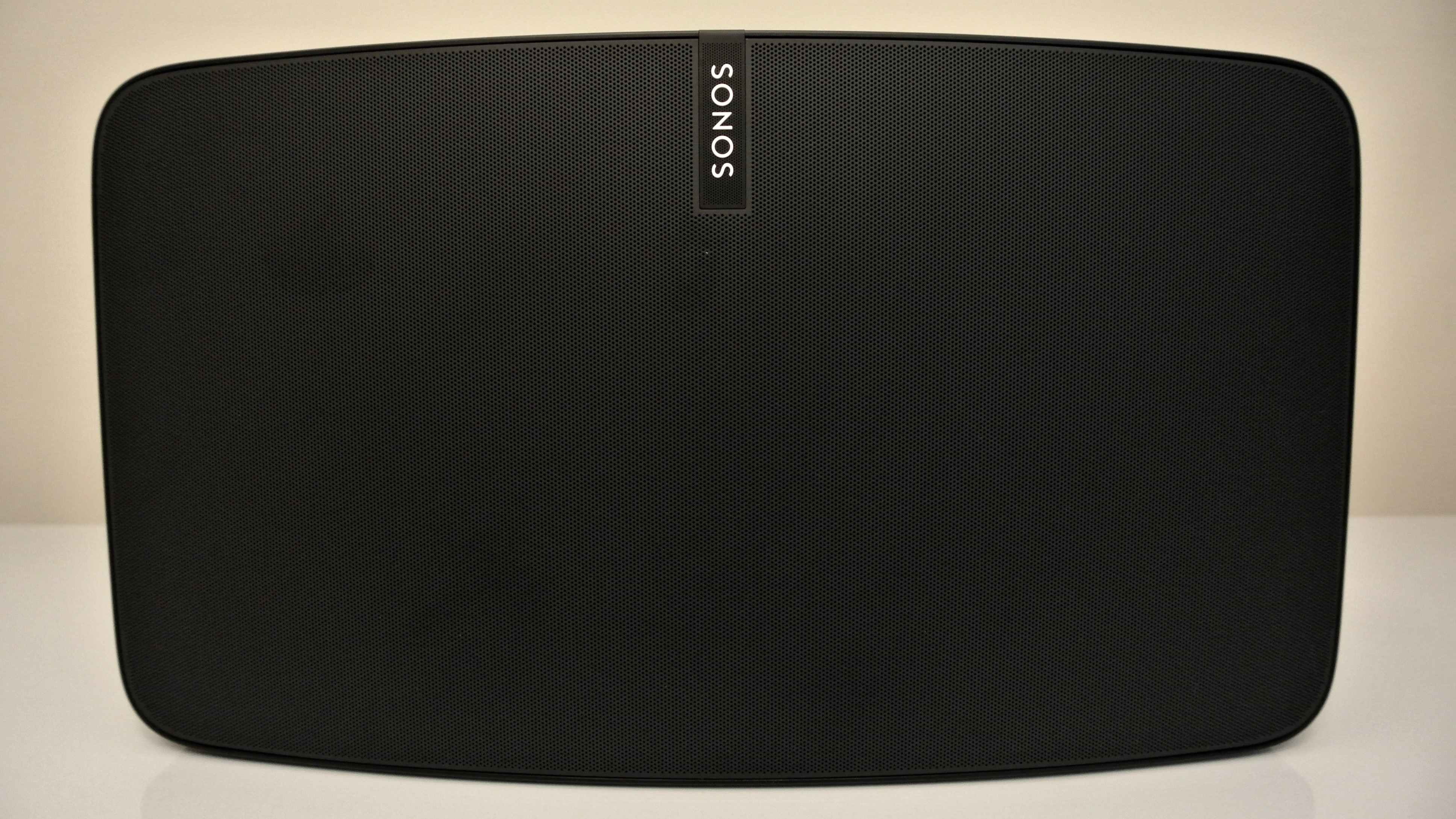 Sonically, Play:5 easily earns its title as a premium speaker and the best all-in-one unit you can buy from Sonos. You can pair two Play:5 units together for stereo sound at twice the volume (and price), but a single Play:5 unit pushes plenty of volume to cover a large room or small home and maxes out at top levels beyond healthy listening without any audio distortion.

Sound clarity across the spectrum is notable in Play:5. Deep bass sounds come through that aren’t delivered in smaller speakers without overpowering higher tones in tracks.  In testing, I found stereo channel separation noticeable but not dramatic, which is reasonable for a speaker of its size. Stereo separation is certainly present and accurate however. Tuning Play:5 with the new Trueplay feature typically cranked up treble tones in my testing, likely to address bass reflecting from nearby objects and overpowering overall sound.

Priced at $499, Play:5 packs Wi-Fi connectivity that talks to streaming services over the Internet to play music directly to it rather than streaming it from an iPhone or Mac. Instead, Play:5 relies on those devices as a controller, combining multiple services into a single interface. If you consider that wireless functionality at around a $100 value, Play:5 should be compared to standalone $400 speakers when measuring the boom for your buck.

Even at its $499 retail price, though, Play:5 delivers a level of clarity and fullness across a range of test genres that you can’t pick up from lesser speakers. Importantly, individual instruments can be picked out of busy tracks without competing ranges across the spectrum getting muddied together. Put simply, I found myself spoiled by Play:5 in testing when returning to less expensive portable speakers. Sonos customers looking to recreate quality audio performance will be satisfied with what Play:5 delivers.

Aside from audio performance, I found features like Trueplay tuning to deliver the best sound regardless of optimal speaker placement and programming alarms to wake you up to playlists or stations very impressive. 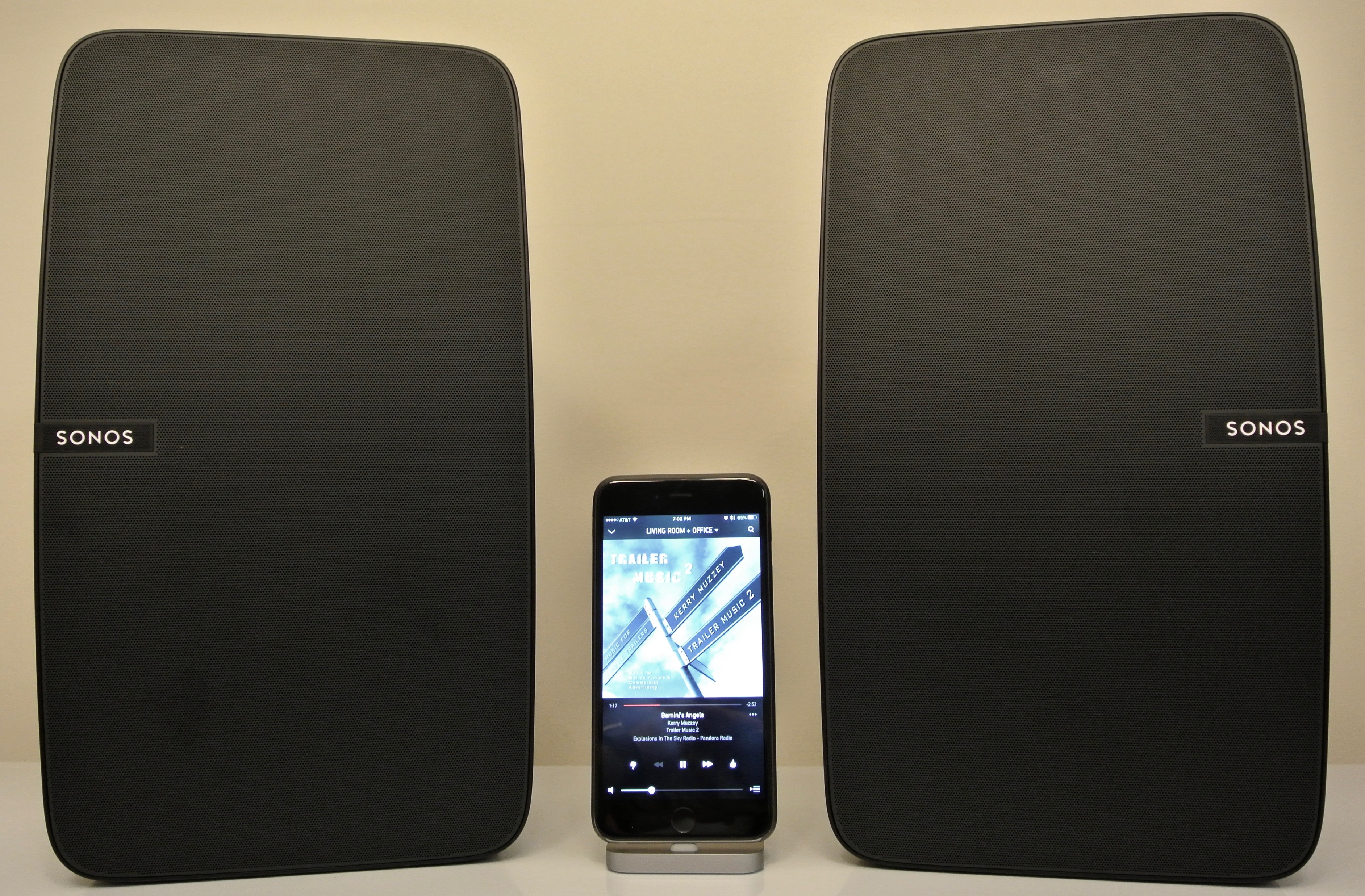 Besides the internal speaker shakeup and external redesign, the Play:5 (2nd gen) features sleeker playback controls that rely on touch and swipe gestures like smartphones rather than physical click buttons like hardware keyboards. I was impressed with the new controls in September during a short demo as the move from traditional buttons to nearly invisible ones has a more modern effect.

After spending a few weeks with the new style, however, I did find it tricky to develop the muscle memory for these touch controls. They’re intuitive, just not overly obvious. Tap play/pause to toggle playback, tap left or right to decrease or increase volume, and swipe left or right to jump between tracks. Visually, it’s a total grand slam over the old style controls still used by Play:1 and Play:3.

These controls also benefit from adapting naturally in three orientations. Play:5 can be used in landscape as a single unit, or in either portrait orientation where the controls adapt for either side. Tapping the top control becomes volume up and swiping up progresses to the next track without the exact buttons being mapped to these functions.

Pairing two Play:5’s is as easy as initial setup. The Sonos Controller app lets you assign a second Play:5 as a stereo addition putting both units in stereo mode, or you can easily add or break up stereo pairs later on. While a single Play:5 does provide noticeable stereo separation on its own, especially on tracks with dramatic stereo effects, pairing two Play:5 units together to have dedicated left and right channels creates the best stereo effect.

But at $499 for each Play:5 unit, spending $1,000 for a stereo setup in a single room likely won’t be as common as placing a unit in different rooms for a multi-room effect. Pairing two Play:5’s together also means you need to rethink volume levels as output is twice as loud. Still, the feature works very well.

The combination of Sonos Controller adding Apple Music, Play:5’s retail launch, and the holiday gift buying season will surely bring a lot of new customers to the Sonos ecosystem. The new Play:5 has a very modern look that a lot of Apple fans will appreciate, especially compared to the original Play:5, and it’s a very fine all-in-one wireless speaker with impressive premium sound.

If you’re looking for one monster speaker to add to your system or start with, the new Play:5 is easily the best speaker Sonos makes. But if your budget is at or under Play:5 territory, new Sonos customers may be better served by picking up a Play:3 and a Play:1 for the same price to get the multi-room experience.

Sonos also runs a holiday special that includes a two-pack of Play:1 units for $50 off the price of buying them individually. For casual music listening, both the Play:1 and Play:3 speakers are impressive for their sizes … and Trueplay only makes them better.

If you’re just starting out with Sonos, I recommend taking advantage of the $349 holiday Play:1 two-pack ($400 value). But if you’re looking for the absolute best single unit Sonos speaker, then you’ll be impressed with Play:5’s performance.