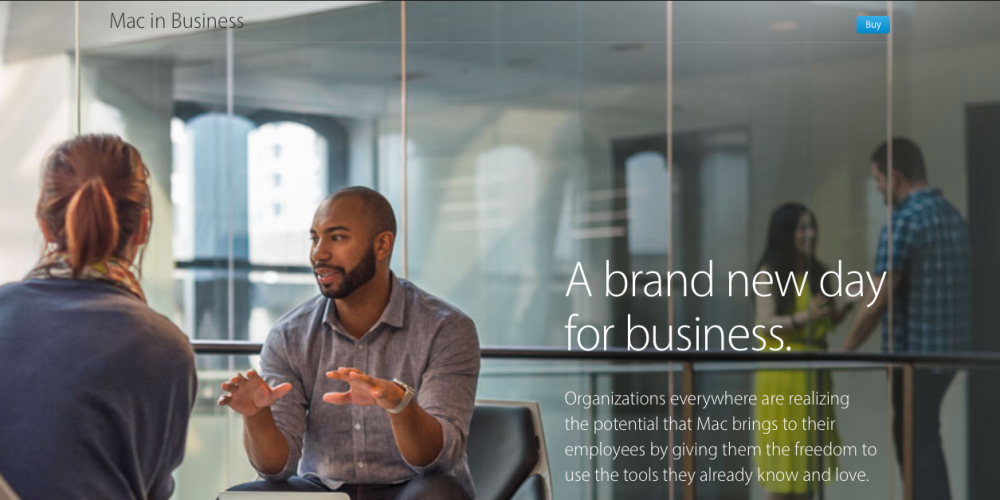 Apple today has given its Mac in Business website a major design overhaul, introducing a new tagline that says it’s “a brand new day for business.” The design refresh comes on the heels of Apple and IBM’s enterprise agreement hitting more than 100 apps across 14 industries and 65 professions earlier today.

“Organizations everywhere are realizing the potential that Mac brings to their employees by giving them the freedom to use the tools they already know and love,” Apple touts on the new webpage. The refreshed Mac in Business site replaces one that was seriously outdated, still referencing Yosemite and advertising the features from that release as brand new.

Regarding Apple’s partnership with IBM, the new Mac in Business webpage mentions specifically how successful the agreement has been. Apple brags that the Mac has surged within IBM, leading to reduced support costs within the company.

Furthermore, the webpage advertises the combination of performance and portability that Apple’s MacBook lineup offers compared to competing products on the market. The site also makes mention of features like Handoff, Continuity, and Personal Hotspot that allow seamless combinations of Macs, iPhones, and iPads.

Last week, Apple gave the Apple ID web portal and much-needed modern makeover, replacing the old and stale design that had blessed the page for so long. You can view the new Mac in Business site here. The redesign highlights Apple’s increased focus on the enterprise market this year.  Tim Cook has conducted a variety of enterprise-focused interviews over the course of the year, appearing at BoxWorks with Aaron Levie, a Cisco product unveil, and at the WSJ.D live conference. Eddy Cue also appeared at the Dropbox Open conference.