Hunter Fan Company, one of the top manufacturers of ceiling fans, has today taken the wraps off of its foray into the HomeKit market. The company has announced a pair of connected ceiling fans that are WiFi enabled and support Apple’s HomeKit platform for communication. The ceiling fans are named Symphony and Signal and come in at $329 and $379 respectively.

The Symphony connected fan offers a more modern design with an all-white appearance, while the Signal fan features wood-finished blades and nickel housing. Of course, the real selling points of the two fans are their connected features.

With WiFi and HomeKit capabilities, users can create scenes to automatically have the fans turn on or off. For instance, users could create a scene that would automatically turn the fan on when the fire alarm detects smoke or when the temperature in the house reaches a certain level. The fans, thanks to HomeKit, are able to interact with other appliances in the house to function more autonomously than non-connected fans do. 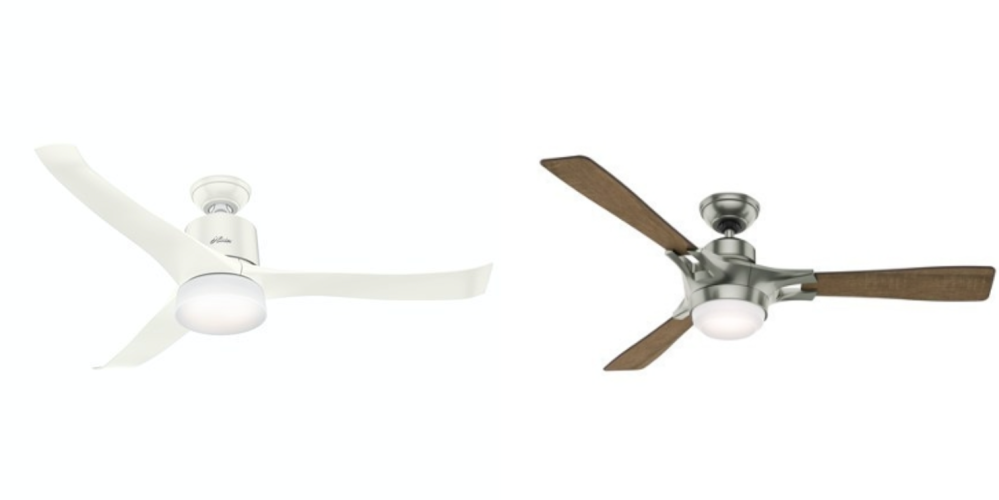 Both the Symphony and Signal fans will be available during the spring of 2016 from retailers such as Amazon, Build.com, Best Buy, Lowes, Home Depot, and Menards, as well as in lighting showrooms around the country.

“Our ceaseless innovation is why Hunter Fan is the industry leader, and these new Wi-Fi enabled fans, with added support for Apple HomeKit, are a testament to our heritage of progress and originality,” said Hunter Fan CEO John Alexander. “They’re beautiful, affordable, high quality pieces of decor that bring state-of-the-art Wi-Fi technology where it might not be expected: the ceiling fan. As we celebrate 130 years, we have several exciting developments to share with our customers, and are proud to kick off 2016 at CES with Symphony and Signal.”

Apple HomeKit technology requires iOS 8.1 or later and allows users to control each fan – or a group of fans – using Siri on their iPhone, iPad, iPod touch or Apple Watch. Users can also create custom scenes with other HomeKit-enabled products: for example, one could create a scene to automatically turn on the fan’s light, lock the doors, close the garage door and set the thermostat to the desired temperature in just one step.  Users can also set up HomeKit-enabled products to work together based on triggers, such as having the fan’s light turn on the moment the fire alarm detects smoke. HomeKit technology provides advanced security with end-to-end encryption and authentication between the fan and the iOS device.

Symphony has a graceful, modern design and comes in fresh white, while Signal, with its satin nickel housing and reversible wood-finished blades, is a contemporary blend of sleek design and classic finishes. Symphony’s MSRP is $329; Signal’s MSRP is $379. Both fans are available spring 2016 at: HunterFan.com; Amazon.com; Build.com; BestBuy.com; HomeDepot.com; Lowes.com; Menards.com; and in lighting showrooms nationwide.

Joining the connected home space was a natural extension of Hunter Fan’s business, and the company is exploring various opportunities for Wi-Fi enabled designs. “When we first had cameras on our iPhones, we didn’t immediately envision the ability to deposit checks with them. Similarly, we know that these fans enhance energy efficiency, home security and convenience, but we believe we’ve just scratched the surface of their full potential,” says Hunter Chief Marketing Officer John Neilson.

Symphony and Signal were developed in collaboration with industry leaders Ayla Networks and Marvell Technology Group Ltd., which will feature the fans in their respective displays at CES. For more information, please visit http://www.hunterfan.com/hunterconnects.

Founded in 1886 and headquartered in Memphis, Tennessee, Hunter Fan Company is the world’s original ceiling fan manufacturer. For 130 years, Hunter has led the industry in innovative design and quality craftsmanship to deliver maximum air movement and unmatched performance.  Hunter ceiling fans are available at lighting showrooms, home centers and online retailers nationwide. For more information, visit HunterFan.com, call 1-888-830-1326 and connect with Hunter Fan Company on Facebook, Pinterest, Instagram, Youtube and Twitter. To see how a Hunter fan would complement your home, download the free Hunter Fan Visualizer app in the App Store and Google Play.