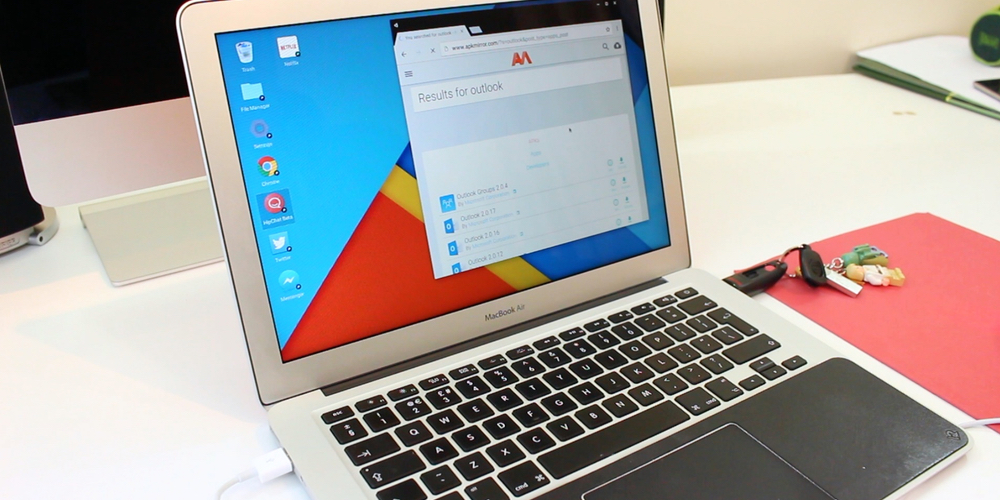 Earlier this month, Jide.com released an early alpha version of its new Remix OS. In essence, it’s a multi-window desktop operating system built on Android. It’s an interesting concept, but what makes it truly intriguing is that you can run it off a regular, fast USB 3.0 flash drive on a Windows PC or Mac. I took it for a spin on Mac to see what the initial version is like to use…

As you can probably imagine, running an alpha version of a tweaked mobile operating system on a Mac from a USB drive was about as hit-and-miss as you’d expect. But it wasn’t as terrible as I thought it would be.

All the apps are placed in the pop-up menu which shows up when you click in the bottom left corner, kinda like a Windows Start menu. The bottom bar shows all running apps.

Because there’s no Google Play Services or Play Store installed in the Mac version, you need to install apps by downloading APK files directly. I grabbed a bunch of my most-used apps from APK Mirror.com.

I discovered afterwards there is a method for getting Google Play Services and the Play Store on to Remix OS manually.

Most apps load in their normal portrait mobile screen ratio format, and you can adjust their size and rearrange them on screen as you like. Or, you can make them full screen. Surprisingly, they’re not terrible. Chrome tends to load the mobile versions of web pages as default, but you can force desktop pages to show instead.

The Notification window is accessed by pressing the list icon in the bottom right corner. Once open, you’ll see any notifications you have, as well as gain access to options like the ‘settings’ menu or the ‘screenshot’ function. This lets you manually select an area on display to screenshot, or just snap the entire screen.

There are a couple of hints that this is Android you’re working with, apart from the obvious mobile apps experience. Firstly, there’s the app history Window, which you can access by pressing F4. Secondly, there’s the Android Lollipop Easter Egg, Google’s own version of Flappy Bird which you access by going to Settings>About and then repeatedly clicking the software version until a lollipop fills the screen.

A couple of things I noticed before you go and try it. Firstly, this is a very early alpha release. There are bugs, you will experience lag, and multiple app crashes. Secondly, I noticed that it runs really slowly on my iMac, but quickly on my MacBook Air, suggesting if you want anything close to fast performance from it, you need to use a solid-state based computer. Thirdly, you need a fast USB 3.0 flash drive, or you’ll have a terrible experience.

If you want to try it for yourself (because you’re secretly curious about the Dark Side) but don’t know how to start, head on over to our guide on 9to5Google. The process is pretty simple and can be done by anyone, regardless of your technical ability or knowledge.