As we’ve reported in the past, Apple is expected to introduce a new 9.7-inch iPad Pro at an event later this month, and now we’ve seen the first alleged case made for the device. Nowhereelse.fr on Twitter has found a pair of cases supposedly made for the iPad Pro 9.7-inch that fall in line with reports that the device will feature Smart Connector support, camera flash, and more.

We reported last month that instead of an iPad Air 3, Apple will introduce a smaller iPad Pro with Smart Keyboard support and Apple Pencil capabilities. In order to support the Smart Keyboard and other accessories like the Logitech CREATE, the device needs a Smart Connector and these cases show that. The cases show that the Smart Connector port is placed on the left-hand side of the device, just like the 12.9-inch iPad Pro. 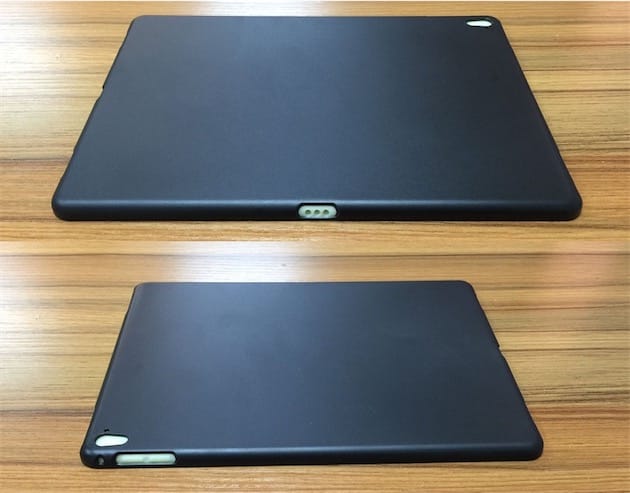 Other than an added Smart Connect port and a larger camera cutout for flash support, the cases show a relatively similar design to the iPad Air 2. Apple is expected to introduce a new Smart Keyboard to go along with the 9.7-inch iPad Pro, while the existing Apple Pencil should work with both the 9.7-inch and 12.9-inch variants.

Apple is working to reinvigorate iPad sales this year after it reported during an earnings call in January that sales have fallen significantly year-over-year, dropping 25% from the year ago quarter. With no iPad Air update in 2015, Apple is likely hoping that keeping prices relatively the same and slapping the ‘Pro’ branding on it will encourage people to update to the its latest 9.7-inch tablet.

The new iPad Pro is expected to be introduced on March 21st at an event on Apple’s campus. The company is also expected to introduce the 4-inch iPhone SE and new Apple Watch bands.