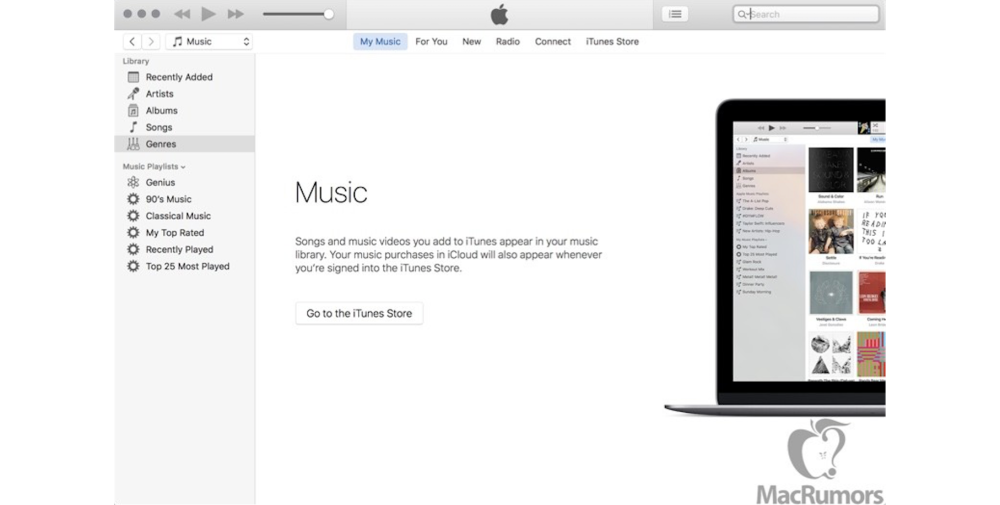 A refreshed version of iTunes has been in the pipeline since Eddy Cue teased it in February of this year. While the Apple executive didn’t specify exactly what would change, a new leak from MacRumors shows that Apple is planning a relatively minor update in iTunes 12.4 that doesn’t dramatically overhaul the interface of the application like many had hoped.

According to the report, the primary changes will come to the sidebar. With iTunes 12.4, Apple will introduce a persistent sidebar that makes it easier to switch between different categories of content, such as recently added, artists, albums, songs, and genres.

Above the new persistent sidebar will reportedly be a new “media picker” that allows users to switch between Music, Movies, TV, Shows, and other content stored in iTunes. While it’s not dramatically different from the picker in the current version of iTunes, it does appear to be slightly easier to use. Like the current media picker, the redesigned one will also be customizable, allowing users to hide media categories they don’t often use.

Other minor changes include simplified menus and a slightly redesigned mini player. With simplified menus, the View menu will reportedly allow users to customize the available content in an iTunes Library. While the changes are minor, menus will reportedly be “easier to use” with iTunes 12.4. The redesigned mini player will move the Up Next functionality to the right side, making it more visible for users.

Overall, iTunes 12.4 appears to be a relatively minor update in the grand scheme of things, though the new sidebar will certainly be welcomed by many users. The overall interface, however, will seemingly stay the same. According to this report, iTunes 12.4 will launch “within the next few weeks,” implying it will launch prior to WWDC. At WWDC, Apple is expected to introduce a more significant overhaul to Apple Music on iOS.