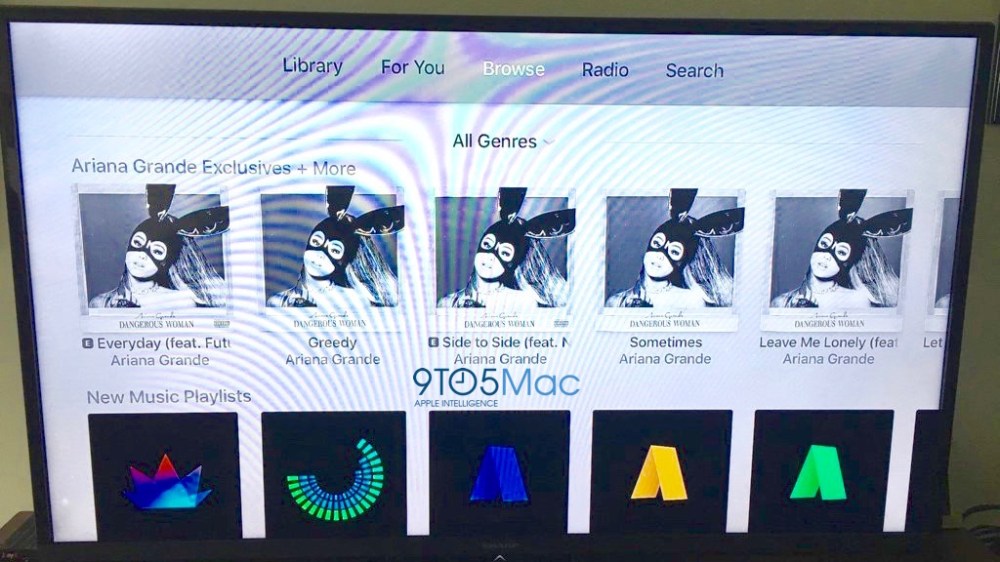 Earlier this month we reported that Apple Music on iOS 10 is set to receive several visual tweaks and feature enhancements intended to make using the subscription music service easier and attract more customers. Changes expected include a more static black and white user interface in place of today’s album art color-matching UI, lyrics integration, and a tweaked tab bar for navigation. We expect Apple Music to rename the ‘New’ section as ‘Browse’ to further highlight curated content found within. A 9to5Mac reader has since discovered this change in the wild thanks to the tvOS Apple Music app on the new Apple TV.

According to the tipster, Apple Music’s Browse tab only briefly appeared before returning to the New label currently found on Apple TV’s Music app. The tweaked navigation bar appears to be an over-the-air change and unrelated to yesterday’s tvOS 9.2.1 release as it was said to be present prior to the update then reverted back after installation.

Apple Music users will also notice that My Music appears to be replaced by Library on the tweaked navigation bar, and Playlists is no longer its own section. Currently on iOS, the My Music tab contains separate sections for Library and Playlists.

We’ve also reported that Apple Music’s Connect feature, which lets artists share content like photos/videos and lyrics with followers, is being relocated in iOS 10’s Apple Music app from its own tab to the For You section. Connect isn’t present on the tweaked Apple TV Music app seen above, but the current Apple TV Music app also lacks the Connect feature; the ‘New’ section currently includes featured videos and songs from Connect instead.

In summary, the current Apple Music app on new Apple TVs features a navigation bar with sections including For You, New, Radio, My Music, Playlists, and Search. The updated navigation bar briefly spotted appears to include Library, For You, Browse, Radio, and Search.

Note also that yesterday’s iTunes 12.4 update for Mac and PC uses the current set of navigation options including New and not Browse as we’re expecting a larger iTunes refresh in the fall. While multiple instances of this change haven’t yet been spotted, the tweaked version does align with what we’re expecting to see from Apple Music in iOS 10.