After the beta test ends, MCX will disable all customer accounts and end consumer access to the service. “We will be concluding our beta test and postponing further releases of CurrentC on June 28, 2016. Therefore, June 28th will be the last day that transactions will be accepted using CurrentC,” the company said in the email sent to beta testers.

Shortly after the email was sent to testers, MCX posted a similar message on its website, while it also put up a FAQ form so users can know what the future holds for CurrentC and their accounts.

Today’s revelation has been a long time coming. Last month, MCX announced that it was postponing the nationwide rollout of CurrentC and would focus on “other aspects of our business” in the meantime. It’s been a rocky road for the service since it launched two years ago. While it was thought that CurrentC would be a viable competitor to Apple Pay thanks to deals with retailers like Walmart, BestBuy, Rite Aid, and CVS, security concerns and the antiquated QR code implementation proved otherwise. 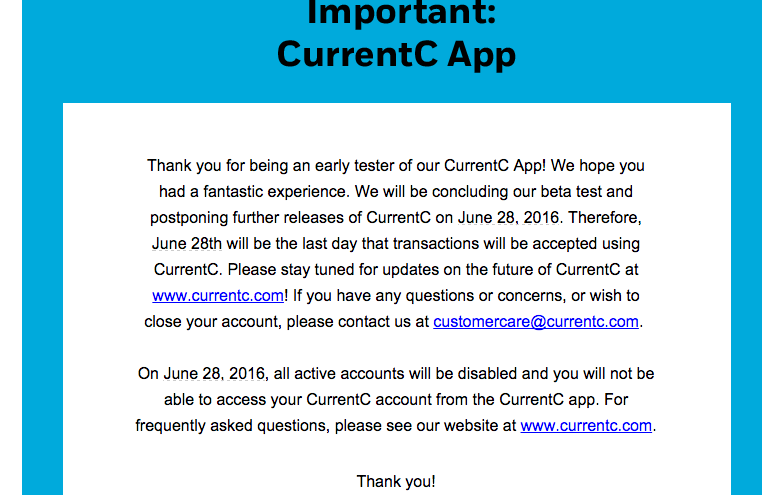 MCX’s original CEO was replaced by another just over a year ago, signaling rocky times for the company. While early exclusivity deals meant that retailers couldn’t accept Apple Pay without facing a fine, many CurrentC retailers now do accept Apple’s mobile payment platform, including Best Buy. Walmart, which has always been adamantly against Apple Pay and was an original CurrentC supporter, abandon the platform and developed its own payment system instead.

At this point, it’s unclear what the future holds for MCX and CurrentC – or if there even is a future. In a statement, a MCX spokesperson noted that it has “not announced future timelines or plans around the app but we’re looking forward to analyzing and learning from the data we gleaned throughout the beta.”

Apple Pay has been expanding rapidly both in the United States and in other countries, and despite some hiccups, it is slowly positioning itself as the top mobile payment platform, but CurrentC disabling all user accounts, it seems that MCX is throwing in the towel.