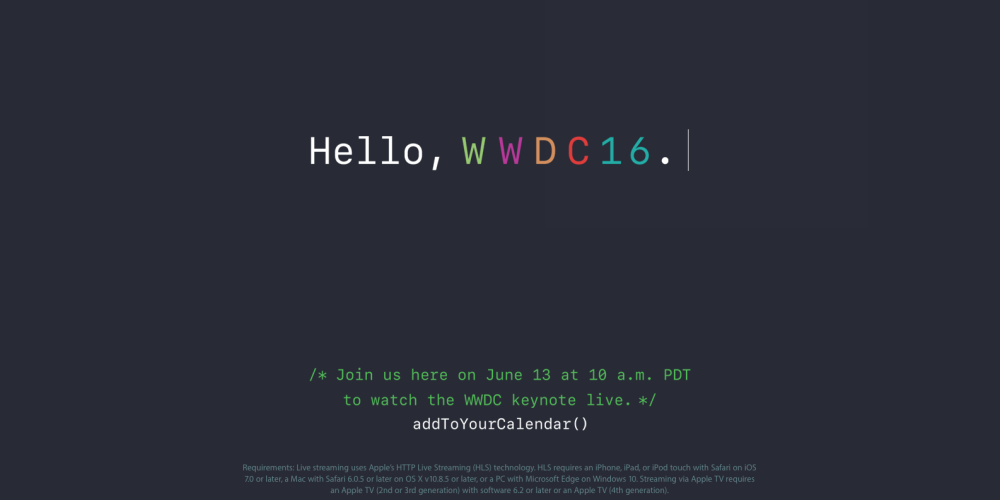 After updating the iOS WWDC app and launching a tvOS version last week, Apple today has added a new page to its WWDC website that confirms its plans to live stream the kick off keynote. As usual, Apple will open WWDC week with a keynote event on June 13th at 10AM PT/1PM ET.

The keynote will be available to live stream across iPhone, iPad, and Mac via Apple’s WWDC website. Second and third-gen Apple TV users will be able to stream the event thorough an Events channel that will presumably be added over the coming days, while fourth-gen users will most likely stream it via the just released WWDC app.

Last week, Apple updated the WWDC iOS app with a dark theme, which many have speculated could mean that iOS 10 will incorporate a system-wide dark theme. Furthermore, Apple made the WWDC app compatible with the Apple TV for the first time with last week’s update.

WWDC will give us a first look at iOS 10, which is said to include a redesigned Apple Music, as well as macOS 10.12 with Siri support. Apple is also expected to unveil a Siri SDK at WWDC.

In addition to streaming the main keynote, Apple will also stream a variety of developer sessions and will make them all available on-demand so users can more easily keep up with the fast-moving week.

You can read our guide of everything you need to know about the event here, as well as everything we expect Apple to unveil here. Be sure to add the WWDC keynote to your calendar by heading to Apple’s website and simply clicking the “Add To Your Calendar” option.