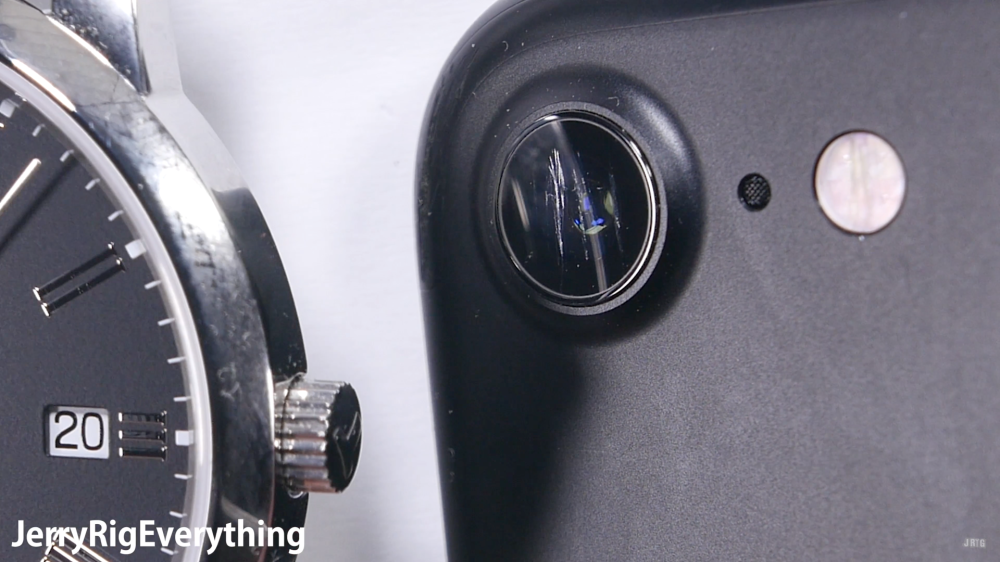 A new video shared over the weekend tests the claim going around that the iPhone 7 camera sapphire lens and Home button covers are less durable than common sapphire covers used in watches. JerryRigEverything compares the iPhone 7 lens cover to a traditional watch sapphire cover in a scratch test to compare hardness levels.

Even before the test video was published, Apple’s marketing head Phil Schiller responded to a question on Twitter about the claims that the new iPhones dropped sapphire with a ‘Not true’ reply. Apple’s tech specs page for the iPhone 7 and iPhone 7 Plus also mentions the ‘Sapphire crystal lens cover’ that was first introduced with the iPhone 5.

While the new video test separately confirms the use of sapphire on the new iPhones, it also suggests that Apple is using a sapphire laminate over glass which explains its weaker durability rating compared to a traditional watch for reference. The video shows Apple’s sapphire lens cover scratching from a #6 pick, which shows it is softer than the Tissot watch face’s sapphire that scratched with a #8 pick.

To be clear, there’s no news here about durability as the iPhone 7 sapphire lens cover showed the same hardness levels as the iPhone SE, iPhone 5s, and iPhone 6. Apple hasn’t dropped the durability between models as some reports may have suggested.

The video does suggest Apple is using the sapphire laminate over the outside facing glass as a cost-effective measure, however, and questions how much sapphire is needed in the composition to even qualify as a sapphire cover.

It includes a lot of sophisticated equipment to test the hardness claims, but unfortunately doesn’t include the Apple Watch display for comparison although it raises the same question at the end. Stainless steel Apple Watches feature a sapphire glass cover that boasts scratch resistance (but not shatterproof) compared to the glass used on aluminum models.

At any rate, the iPhone 7 sapphire lens cover is just as strong or weak as the cover used since the iPhone 5 so don’t expect it to withstand any more damage than before or scratch under less force.