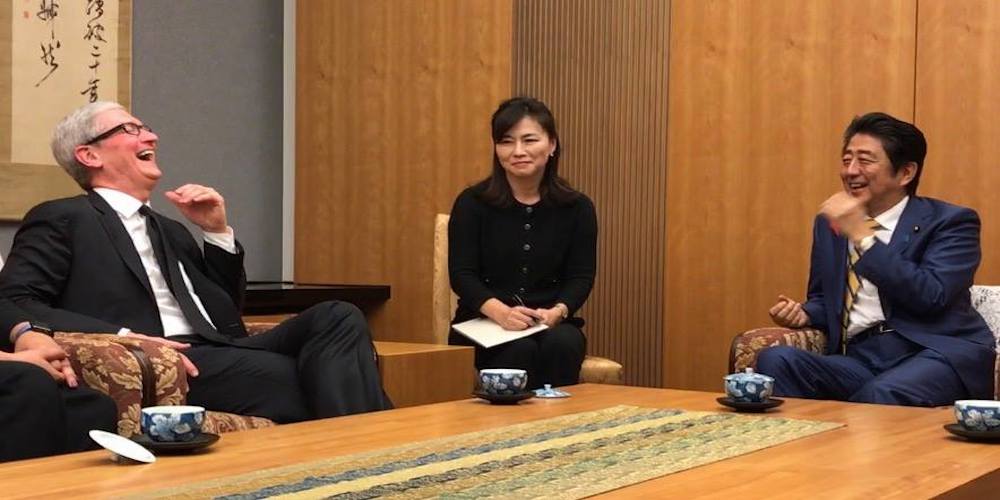 Apple CEO Tim Cook met with Japanese Prime Minister Shinzo Abe on his trip to Japan this week as chronicled by the leader’s Facebook page (via Macotakara). In the meeting, the Japanese PM noted that without Japanese innovation, the iPhone couldn’t have been developed. Speaking of development…

According to Xinhuanet Cook said, “We talked about the future and doing great things together. I shared with prime minister Abe our love for Japan and how important the country is to Apple,”

Abe’s top spokesperson Chief Cabinet Secretary Yoshihide Suga told a press briefing that Cook confirmed that Apple would complete its construction of a site in Yokohama, just outside of Tokyo, by December and that it would be used as a development facility.

Cook has been on a whirlwind tour of Japan this week, chronicling the journey on Twitter. He first visited with Nintendo executives during the trip, and even got some Super Mario Run tips from the master himself.

Tim Cook to BuzzFeed Japan: Super Mario Run already boasts 20 million iOS users who chose to get notifications when the game is out in Dec.

He also demoed (below) paying for a ride on JRE’s Yamanote line with Apple Pay.

The trip follows a visit to Shenzhen where Cook announced another Apple R&D center.

Just rode JRE's Yamanote line with Apple Pay. Can't wait for our customers in Japan to start using it later this month. pic.twitter.com/mMcK3iIaS4

Getting the hang of Super Mario Run, thanks to Miyamoto-san and his awesome team at Nintendo! pic.twitter.com/gSxU4iQbAv