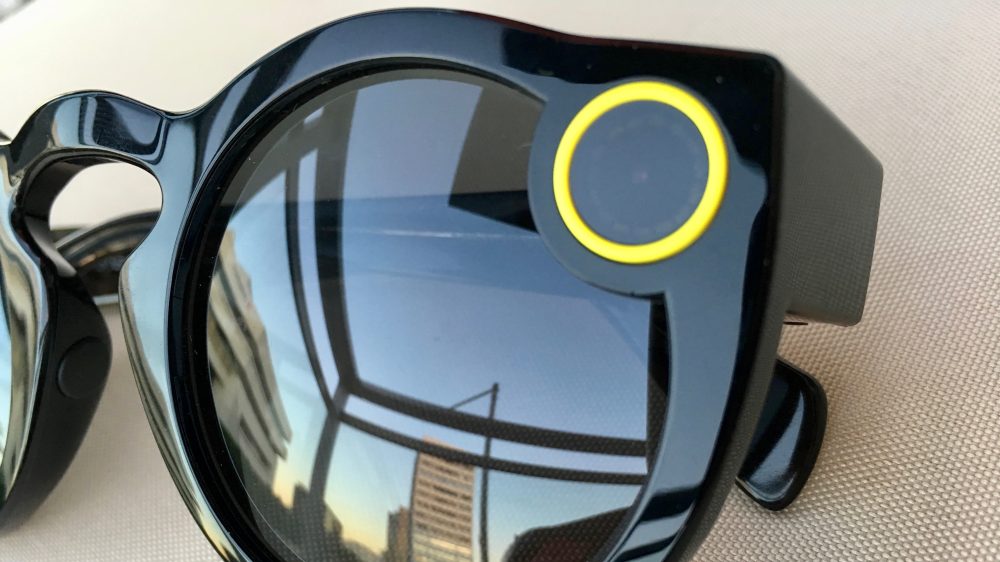 Snapchat has sold branded beach towels and ghost backpacks for a while now, but their first real foray into the hardware space launched yesterday: Snapchat Spectacles. As seemingly hipster spy glasses, this device aims to keep you in the moment while allowing you to capture video of whatever you’re viewing to share with friends and family later on.

Yesterday, we managed to grab a pair of Snapchat Spectacles from their only point-of-sale in Venice, CA…

This is the kind of device that warrants an initial-impressions review and a lengthier review after a few weeks of usage. Here’s the former.

Rather than going for the more traditional online or brick-and-mortar approaches, Snapchat is selling the Spectacles exclusively in a way no other hardware company would do: via unique vending machines, called “Bots”.

Without any prior announcement, the @Spectacles account yesterday tweeted out the first location of a Bot – less than 100 feet away from the original Snapchat HQ on the Venice Boardwalk.

I arrived about an hour after the Bot had started dispensing Spectacles and they had already sold out, but a van had arrived to refill the machine with new ones.

At first, customers were able to buy five or even more for themselves, which meant the line moved very slowly. Eventually, the machine updated and only allowed for two per person. I was about 50th in line so it took about two hours to get to the front of the line. 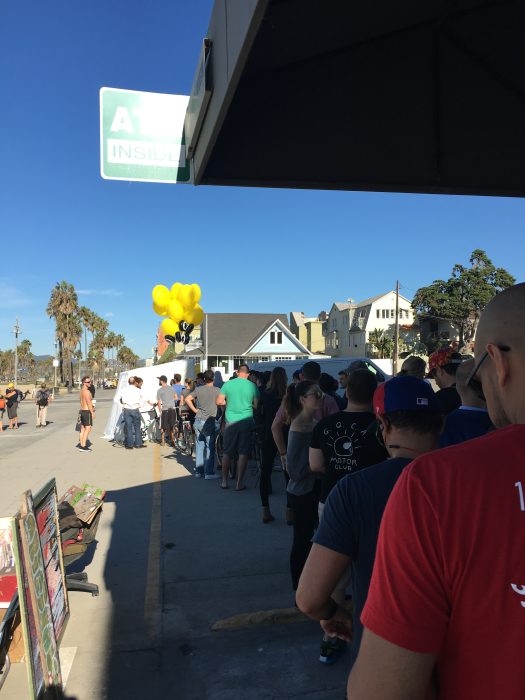 The machine itself has three buttons – one for each color variation of the Spectacles. Pressing on one of the colors shows you a video feed of yourself with the chosen Spectacles hovering over your eyes so you can see what it’ll look like. If you like what you see, you insert your credit card and the device is dispensed in the Bot’s “mouth”.

You now have $129+tax less, and the Spectacles are in your hands. The entire experience is definitely more hype-inducing and branded compared to walking into a Best Buy and finding it among all the other devices. Snap Inc gets to control the entire experience.

The case charges up the Spectacles when you place them in and ensure the charging contact points meet, with a little assistance to the magnets that hold them in place. On the side of the case, there’s a button that will show how much charge is left on the case – like the good ol’ days of the MacBook.

The USB cord can charge the case or the device directly. If you’re already tired of plugging in several devices to charge at night, your apathy might set in with yet another device. Now to see if it’s worth it…

A walk-through of the devices 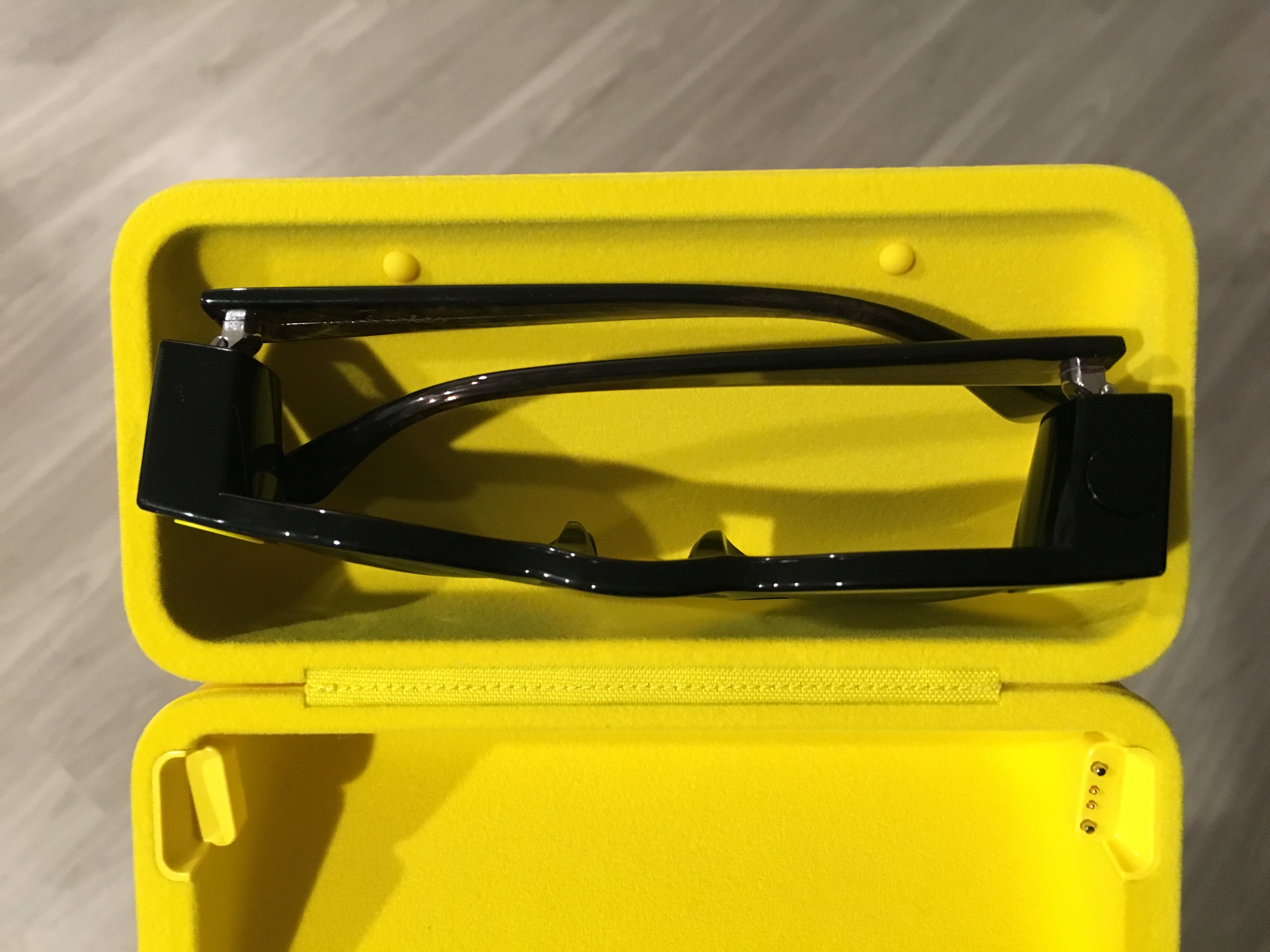 At first glance, these look like regular plastic sunglasses when you’re wearing them. However, the two front facing cameras give it away. Around the perimeter of the left camera is a loop of small lights that spin around when you are recording a video or when displaying the battery life. At the top of the device is one single button. 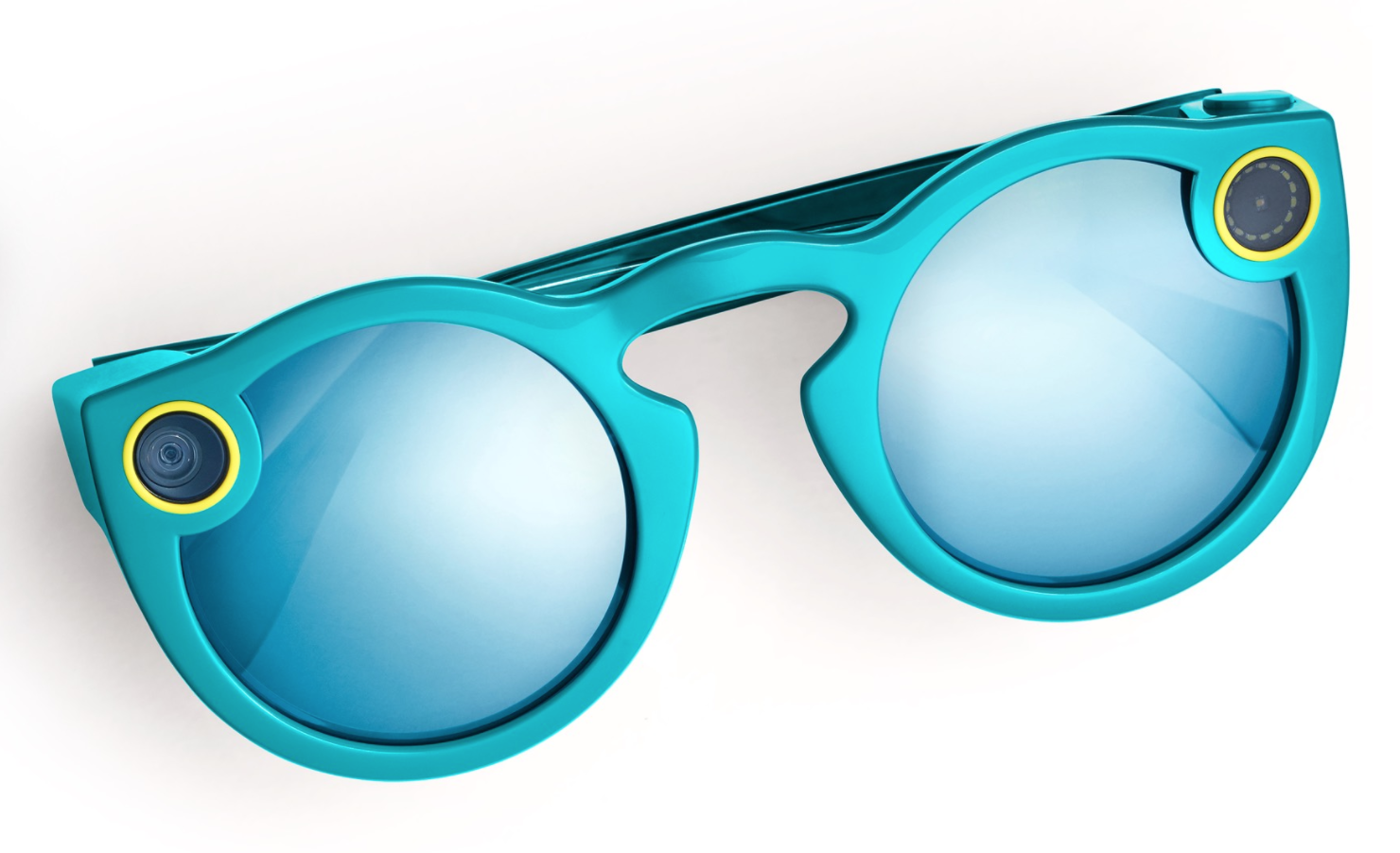 The small form factor of the electronics and battery mean the Spectacles can fold up – and reveal the charging contact points behind the left hinge.

The Spectacles pair with your phone via Bluetooth. To hook them up, you put the Spectacles on, open up the Snapchat app to view your snapcode, and press the (only) button on the top of the device. The app guides you through the rest of the Bluetooth pairing process. 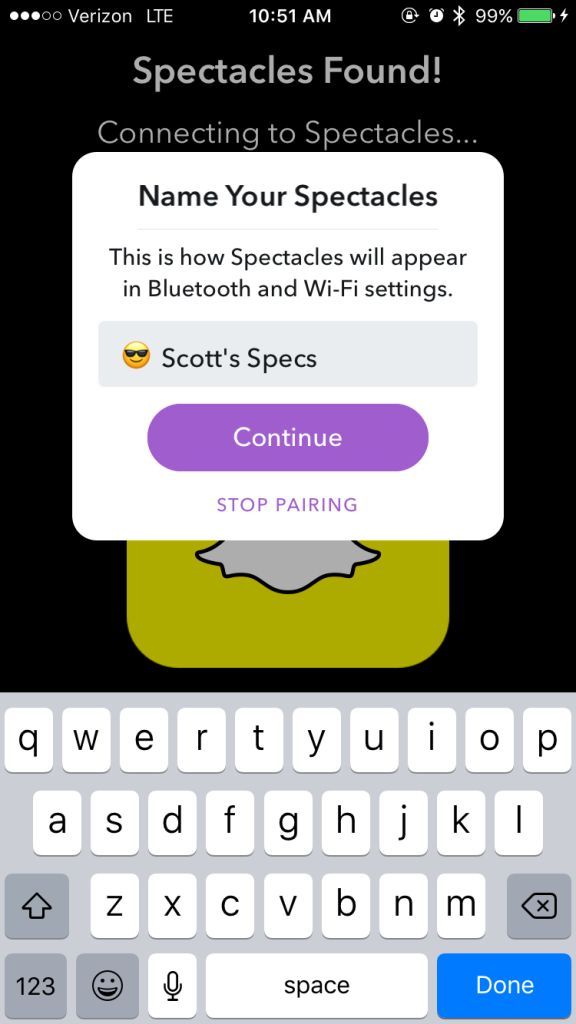 The device only has one button on the left. Press it once to start recording a 10 second video, press it again to keep recording beyond the ten seconds, or hold the button down to stop the recording early. To view the battery life on the device, you can tap the side to shake the accelerometer and the device shows you an indicator of how much juice is left.

While recording, you’ll see a small white circle in the corner of your eye while the rest of the world sees the spinning light loop on the front. The light starts flashing when it’s nearing the end of the recording and disappears when it’s done.

Spectacles imports all of the videos into a “Specs” section of your Memories in the Snapchat app, which can then be posted to your Story, sent as a direct message, or saved to your camera roll. 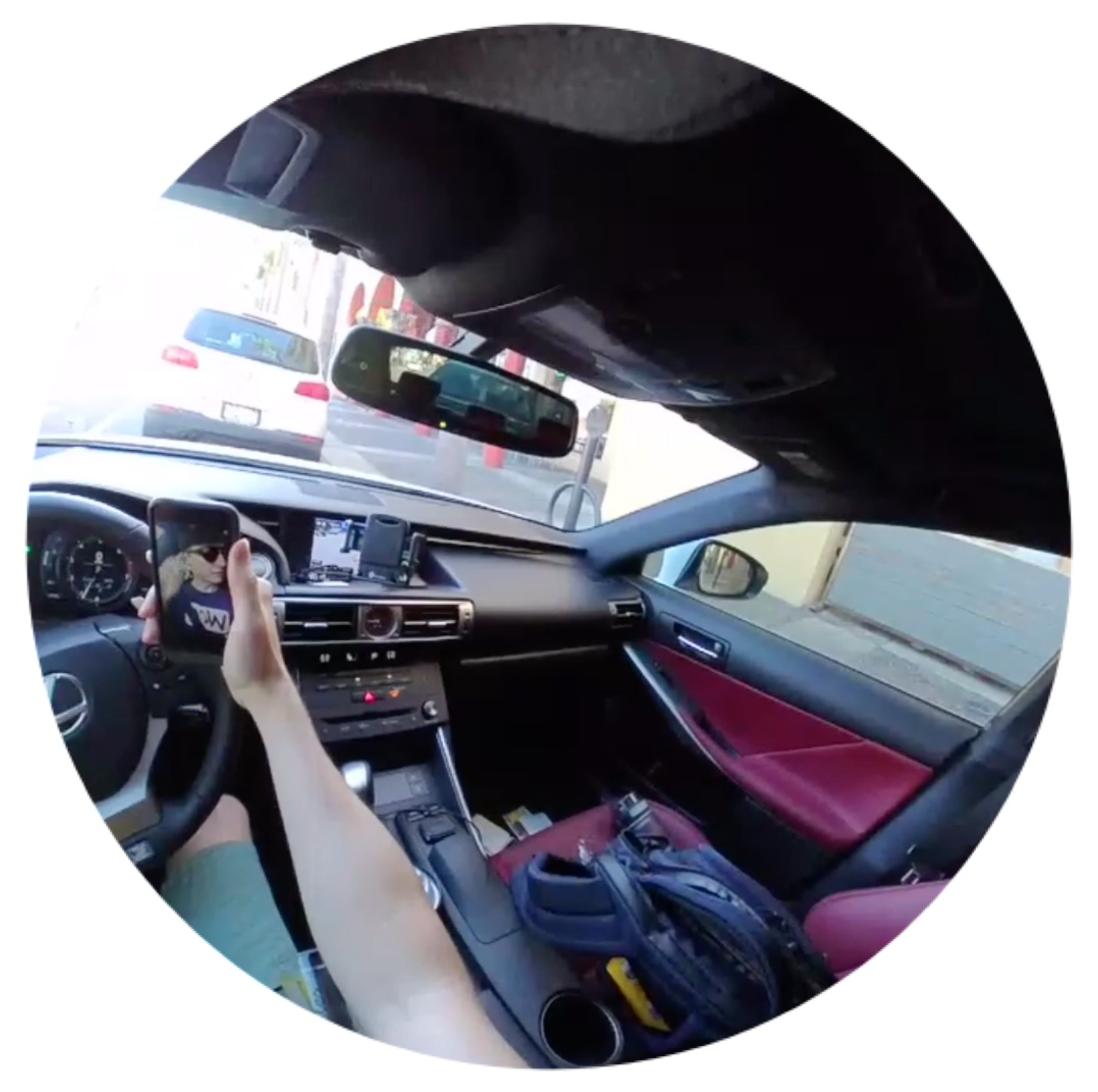 The videos taken by the Spectacles aren’t landscape or portrait. They’re circular. When a Spectacles video is viewed in the app, you can tilt your phone to view the video in different angles.

When the video is saved to your camera roll, the entire ‘circle’ is placed onto a white background.

For a $130 device … wow. This thing packs a punch into a small package and this doesn’t seem like the child of a social network. The entire setup experience is swift and easy to understand, the lack of on/off button makes it seem like regular sunglasses that just so happen to record a video when you press a button, and the charging case makes it so this thing can last for a good while.

Let’s talk video quality. It automatically imports SD versions of your videos, and you have to connect to the Wi-Fi network it creates if you want to import HD videos. This… takes a while. But the SD videos aren’t too shabby. The video quality is relatively good in natural light situations, but low light situations or indoor lighting makes it look like a terrible spy cam video. Wondering why these are sunglasses instead of regular glasses? My theory is that Snap used this as a workaround for the low-light quality issues by encouraging outdoor use in general.

How about the battery life? This is a device that’s only on for a few seconds every once in a while then goes back to sleep the rest of the time. I went for a 30-minute bike ride, took about twenty 10-second videos, and the battery drained about 10% or so. So the tech seems solid. But then there’s the biggest question of them all… Why?

Why use Spectacles rather than just using your phone? In short, the goal of Spectacles is to keep you in the moment and two-handed while allowing you to capture what’s happening in front of you. For me, it means I can record cool things while still maintaining control of my bike. The Spectacles also give you near-instant access to a camera, rather than having to take out your phone and launch the camera.

So far, I’m a big fan. But time will tell – our more in-depth review in the future will be a better indicator of the longevity of this device. Check out more hands-on photos below, and stay tuned for additional thoughts!