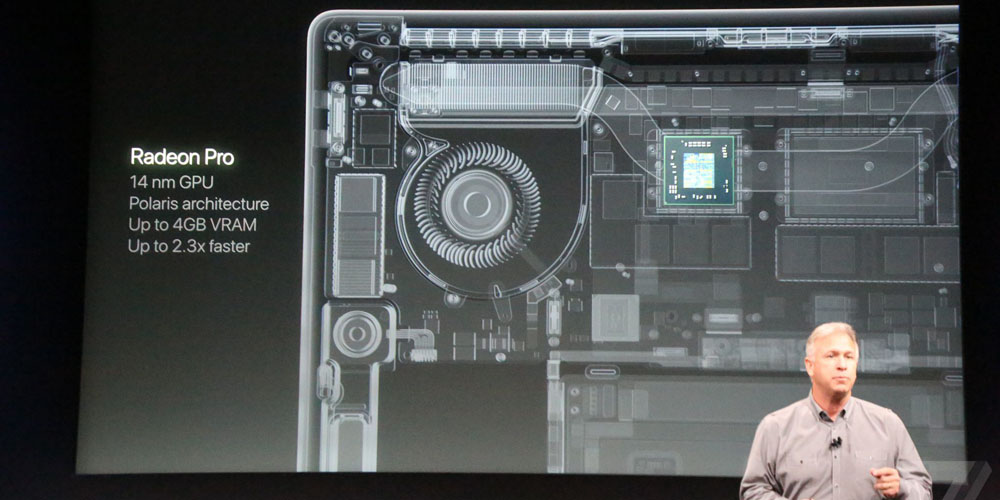 One slightly surprising spec in the new 15-inch MacBook Pro line-up is that even the base model got an AMD GPU. Previously, Apple has offered only integrated GPU in the base model, reserving discrete graphics for the higher-specced models.

John Gruber noticed that the ArsTechnica review explains this: it was the only way to allow the machine to drive two 5K monitors. And the reason for that is that Apple had to use something of a workaround to achieve it …

When you hook one of LG’s 5K monitors to one of the new MacBook Pros, what you’re actually seeing on the screen is two pictures stitched together to make a single seamless image. This is because the version of the DisplayPort spec supported by Intel’s GPUs and almost all monitors these days—version 1.2—doesn’t have enough bandwidth to drive a 5K display at 60Hz all by itself. This will change with DisplayPort 1.3, which is right on the cusp of going mainstream, but it’s not here yet. Apple is actually pushing two DisplayPort 1.2 streams to the monitor over the single Thunderbolt 3 cable.

Intel’s GPUs only support three display streams in total. Given that a single 5K monitor requires two of them, that would mean all of them would be used driving the internal display plus one 5K monitor. AMD GPUs, in contrast, support six streams. This allows 15-inch MacBook Pro models to use four of them to drive two 5K monitors, a fifth to drive the internal display and still have one left over (which could drive an additional 4K display).

Power consumption aside—the laptop version of the GTX 1060, Nvidia’s slowest Pascal-based laptop chip, has an 85W TDP where the MacBook Pro’s AMD GPUs are all 35W—Nvidia’s cards support a maximum of four displays. And while Nvidia’s GPUs support DisplayPort 1.3, the Thunderbolt 3 controller and most monitors only support 1.2.

It does raise the question of whether Apple might offer an Nvidia-specced option once DisplayPort 1.3 is more widely supported. At that point, an Nvidia GPU’s four display streams could drive the internal display plus up to three 5K monitors.

We’re starting to learn more about the innards of the new machine now that they are shipping. We heard yesterday that the SSD is non-upgradable, today confirmed by an iFixit teardown, which also revealed that the speaker grilles appear to be purely cosmetic.