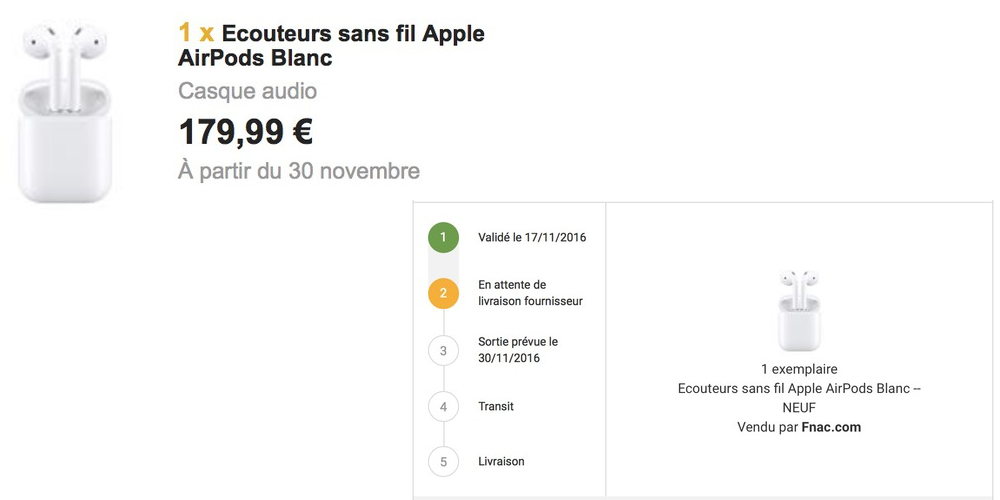 Major French electronics retail chain FNAC is claiming that it will have AirPods in stock on November 30, and is taking pre-orders for delivery on this date, notes Mac4Ever.

Although the preorder page specifies only November, the order confirmation (seen above) specifies the end of the month in two separate places.

Whether this is based on solid information or just another guess is unclear. At this point, we’ve heard plenty of conflicting reports about when the long-delayed wireless headphones will finally go on sale …

As we noted yesterday, estimated shipping dates have ranged from today to next year.

A Chinese supply chain report claims that Apple will completely miss the holiday quarter, and won’t be able to deliver earlier than January – something which would obviously have a major impact on sales. Czech Republic retailer Alza.cz, in contrast, said they would go on sale next month. Another European retailer has already seen its estimate of today blow by …

The executive summary, then, appears to be that nobody knows. Possibly not even Apple, as we have yet to see any explanation for what went so badly wrong that the company had to cancel the planned late-October release.

Early reviews have been generally positive, describing the sound as okay – probably the best that was likely from a successor to EarPods – with really clever tech, though weird looks.