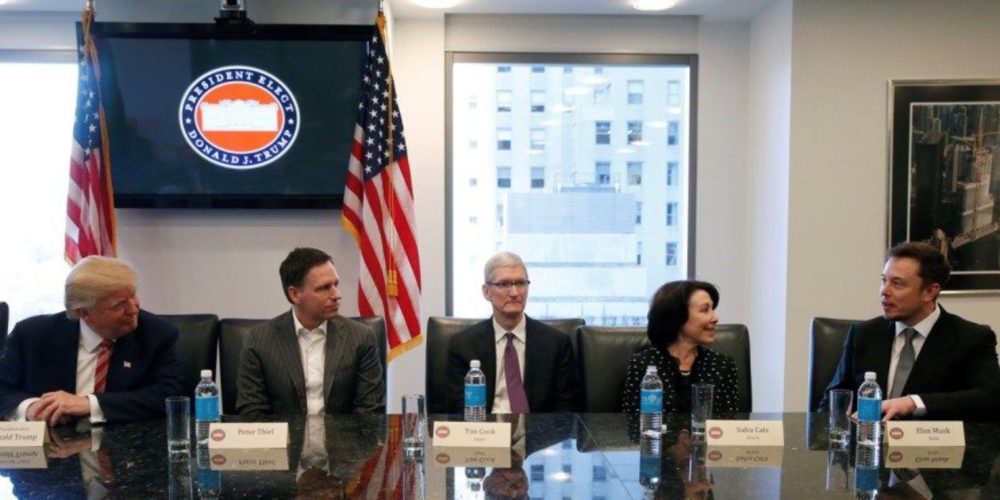 While Twitter may have not been in attendance, President-elect Donald Trump held a meeting with other top technology executives including Tim Cook, Larry Page, and Elon Musk today at Trump Tower. The meeting, according to The New York Times, covered a variety of topics, mainly centering around immigration, jobs, and China…

According to a pool report, Trump opened the meeting by praising the technology executives in attendance, saying “there’s nobody like the people in this room.” Trump then offered up an invitation for the various executives to come to him at any time if they need something:

“Anything we can do to help this go along, we’ll be there for you. You’ll call my people, you’ll call me. It doesn’t make any difference,” Trump continued. “We have no formal chain of command around here.”

It’s without a doubt that Trump has clashed with most of the executives that were in attendance at some point, and he acknowledged that during his remarks. The President-elect explained that everyone in the room is “doing well right now” and that he’s “honored by the bounce.”

“I’m here to help you folks do well. And you’re doing well right now and I’m very honored by the bounce. They’re all talking about the bounce. So right now everybody in this room has to like me — at least a little bit — but we’re going to try and have that bounce continue.”

Moving into policy discussion, Trump explained that his plan to slash the corporate tax rate will make it significantly easier to repatriate money kept overseas, according to USA Today. “We’re going to make it a lot easier for you to trade across borders,” the President-elect said.

“They’re going to do fair trade deals,” Trump said. “They’re going to make it easier for you to trade across borders, because there are a lot of restrictions, a lot of problems. If you have any ideas on that, that would be great.”

Incoming White House Chief of Staff Renice Priebus said that the meeting, which ran for over 2 hours,  included “productive discussions about job creation and economic growth.”

Specific details of the meeting are still unclear at this point, however. Early reports claim that immigration, manufacturing, jobs, and China were central topics of discussion. Alongside Trump, his kids Ivanka, Donald Jr., and Eric were, for some reason, in attendance, as was VP-elect Mike Pence.

While Cook, Musk, and Page have yet to release statements concerning their time with Trump, other executives in attendance have.

In a statement, Jeff Bezos of Amazon and The Washington Post explained that the meeting was “very productive,” explaining that one of the key points of the meeting was making innovation a “key pillar” of Trump’s administration.

“I found today’s meeting with the President-elect, his transition team, and tech leaders to be very productive. I shared the view that the administration should make innovation one of its key pillars, which would create a huge number of jobs across the whole country, in all sectors, not just tech–agriculture, infrastructure, manufacturing–everywhere.”

Speaking to CNN, George Zachary, a venture capitalist and friend of Elon Musk, stated that he saw the meeting as being “all about appearances.” Zachary stated that “there is at least the impression of communication going on” because of today’s meeting, which will “diffuse” some of the tension between Trump and Silicon Valley.

It’s no secret that Trump has clashed with many technology leaders. He’s trashed the idea of climate change, a principal held close to heart by Musk and many other tech executives, including Tim Cook. He’s publicly called for a boycott of Apple. And he’s repeatedly trashed Jeff Bezos and The Washington Post threatening to break up the “Amazon monopoly”.

As more details emerge, we’ll have the latest. Tim Cook and Elon Musk were slated to stay behind and meet privately with Trump, but specific information form those meetings are unclear at this point.

View the carefully arranged seating chart of the meeting below, courtesy Business Insider 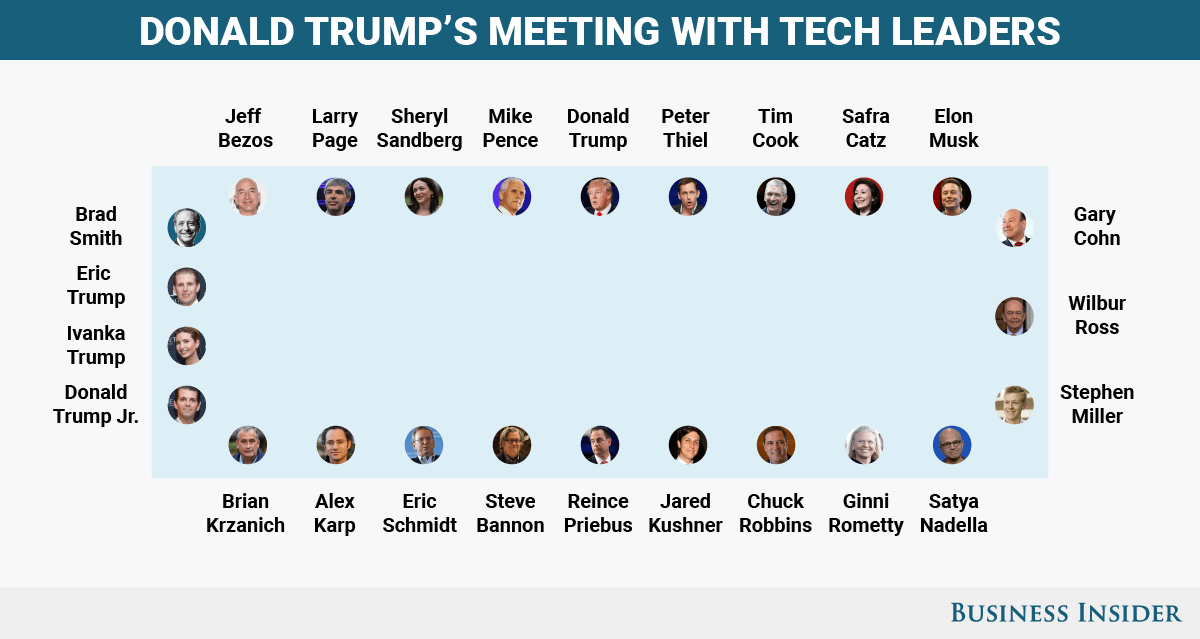