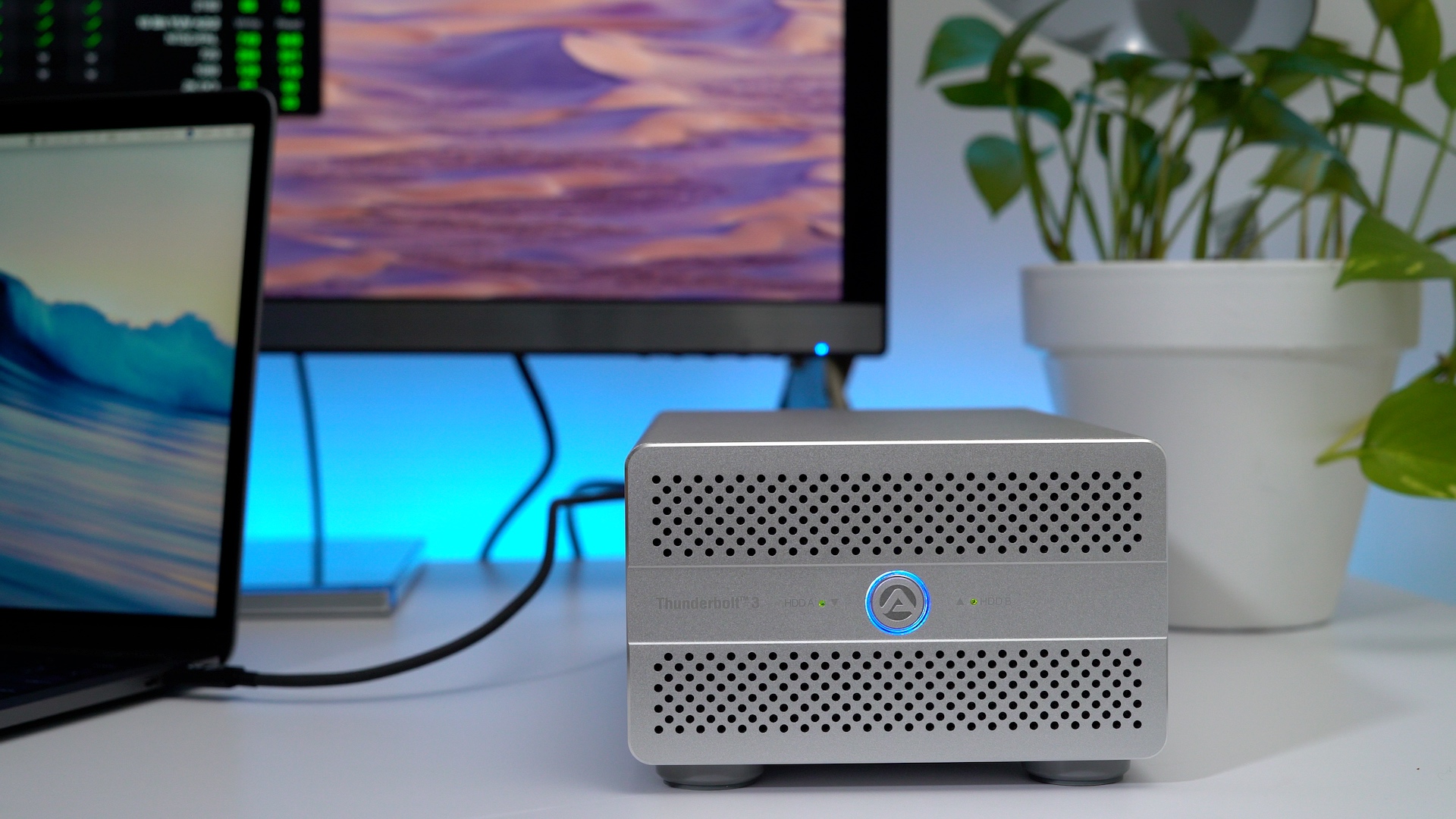 I’ve been testing two new Thunderbolt 3-enabled storage enclosures from the fine folks at Akitio. The Thunder3 Duo Pro is a hardware RAID-enabled enclosure that can accommodate two 2.5- or 3.5-inch drives. The Thunder3 Quad is an enclosure that supports up to four 2.5- or 3.5-inch drives. The Quad lacks a hardware RAID controller, but you can use utilize software RAID at the OS level.

Both enclosures feature dual Thunderbolt 3 ports, which allow the devices to be daisy-chained, and both feature DisplayPort connectivity for supporting external 4K displays at 60Hz without needlessly occupying the adjacent Thunderbolt 3 port.

In this hands-on video, we unbox both enclosures, and mate them with 550MB/s SATA-III solid state drives. What we found was impressive speed when paired with the latest MacBook Pro.

A word about Thunderbolt 3 devices and the MacBook Pro

Before you’re able to use any of the devices mentioned in this hands-on, you’ll have to run TB3 Enabler to enable unsupported Thunderbolt 3 devices on your MacBook Pro. Thunderbolt 3 devices that utilize the first-generation Texas Instruments chipsets show up as ‘unsupported’ in macOS’ System Information, thus, you’ll need to rely on a hack in order to enable these devices.

The workaround is extremely easy to pull off, and I show you how to do so in this post, but you should still be aware that these devices will not work out of the box with the MacBook Pro. With this in mind, you’ll want to consider such a factor when making an investment in any Thunderbolt 3 devices that feature the first-gen TI chipset. Newer devices, such as Akitio’s upcoming Node eGPU, feature the second-gen chipset, which will work out of the box with no hacks necessary. 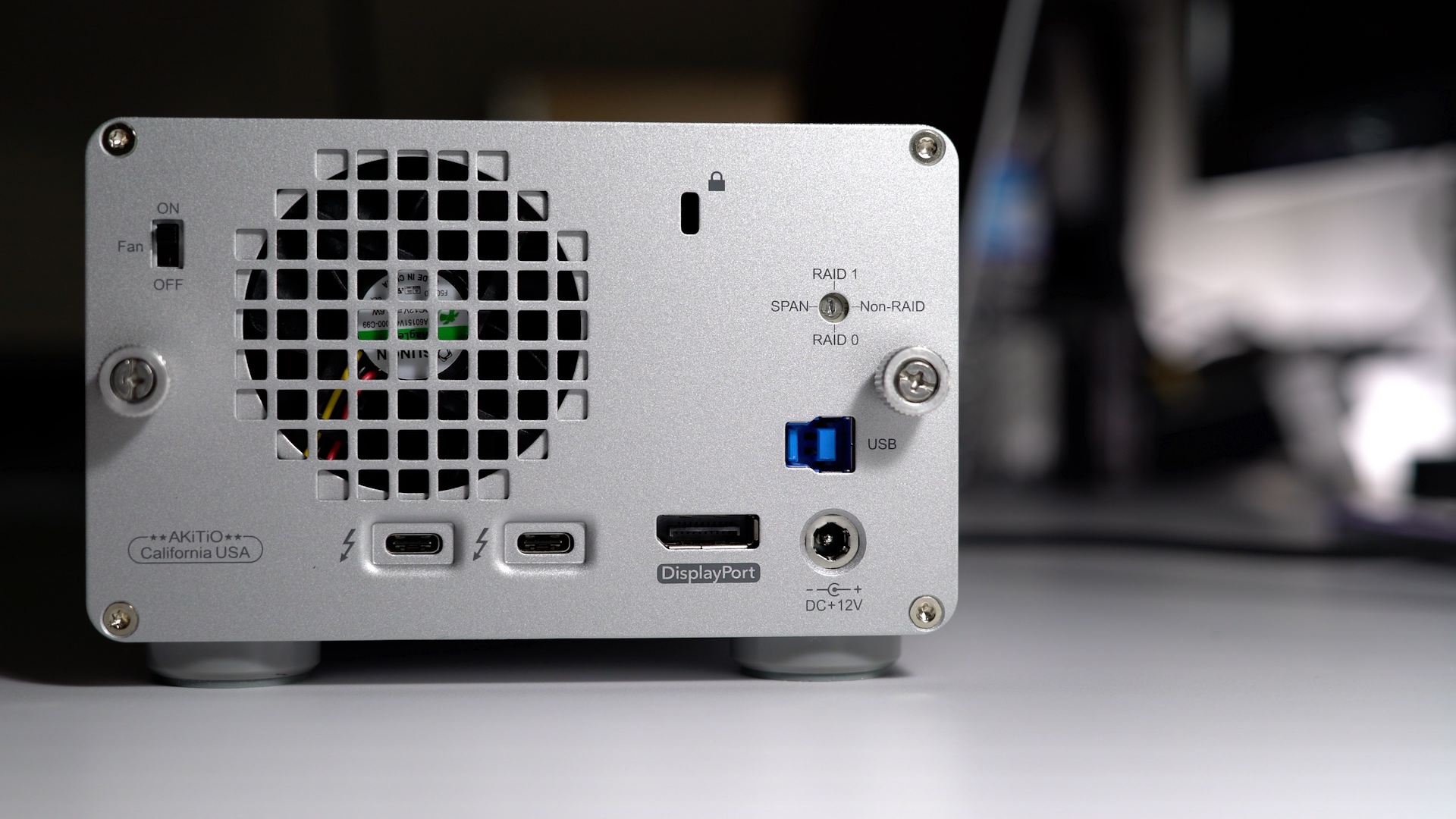 The SSD installation process was super simple for the Duo Pro. The friendly people over at SanDisk provided us with four 960GB Ultra II SSDs for this test, so we’d like to thank them for their help. SanDisk’s SSDs were used in each test, which allowed us to survey the potential of each enclosure. 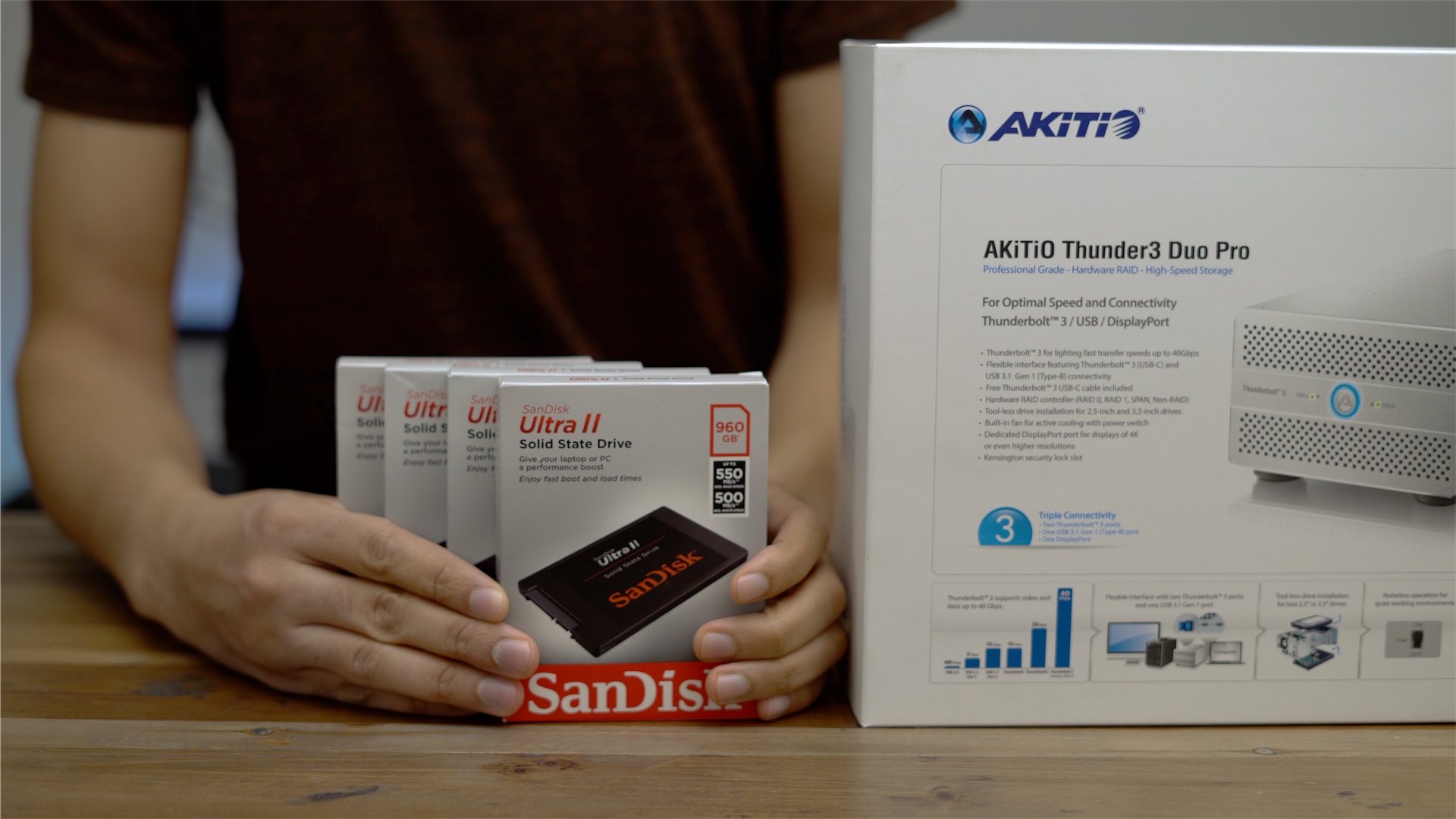 Installation begins by unlocking the two hand screws that attach to the slide-out enclosure. The drive installation couldn’t have been easier, because there is a screw inside the enclosure that connects to the thread on the side of the SSD. By simply hand-turning the screw, I was able to lock each drive into place in just a few minutes.

One advantage of the Thunder3 Duo Pro is that it features an OS-independent hardware RAID controller, which can be configured simply by turning the screw on the back of the enclosure. You can configure the unit to use each drive individually, but you’ll likely want to use RAID 0. 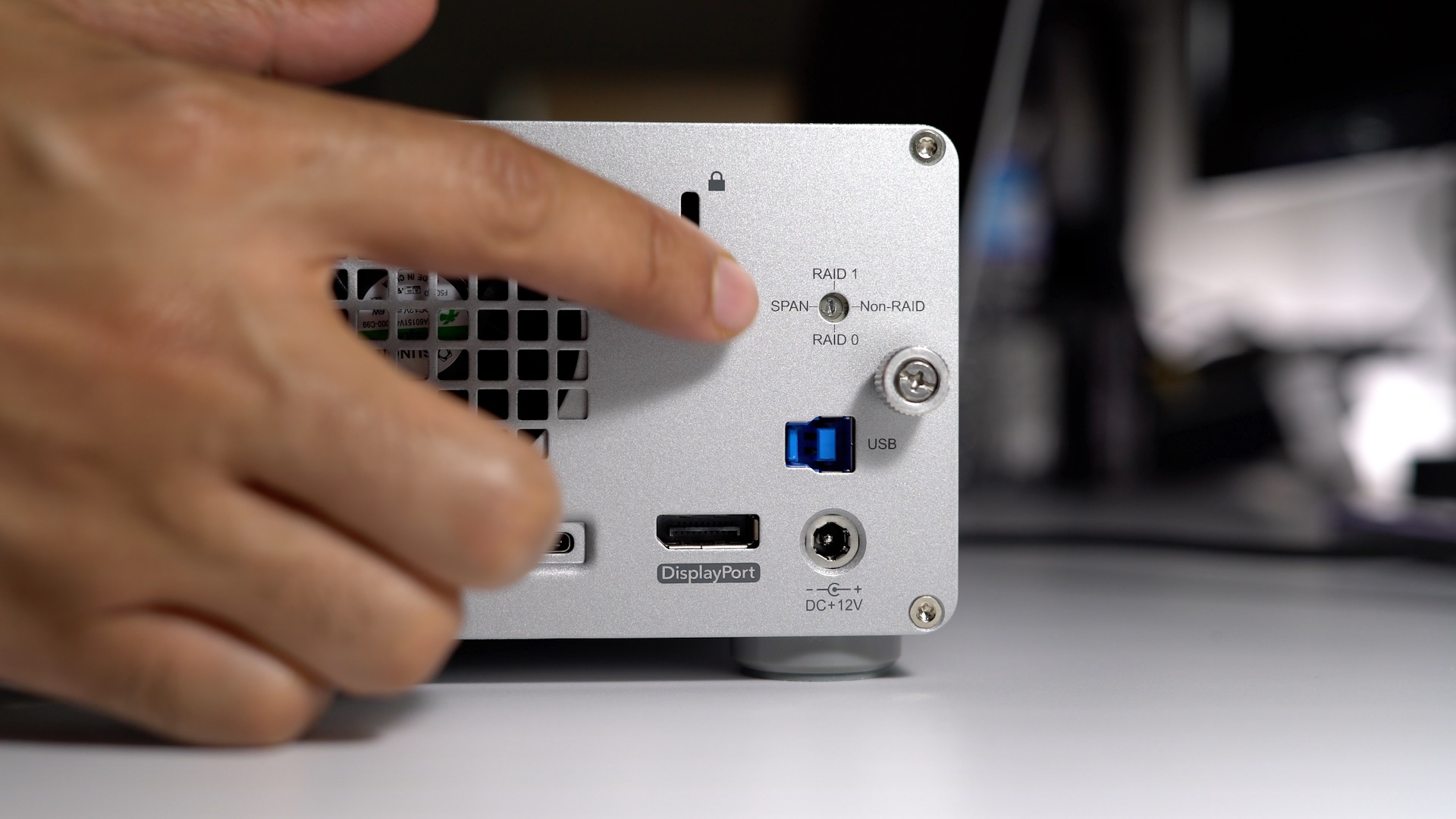 Once connected, the drive was immediately recognized as a single drive. Since there is a built-in hardware RAID controller, I didn’t have to fool with any of the RAID settings in the macOS Disk Utility app. 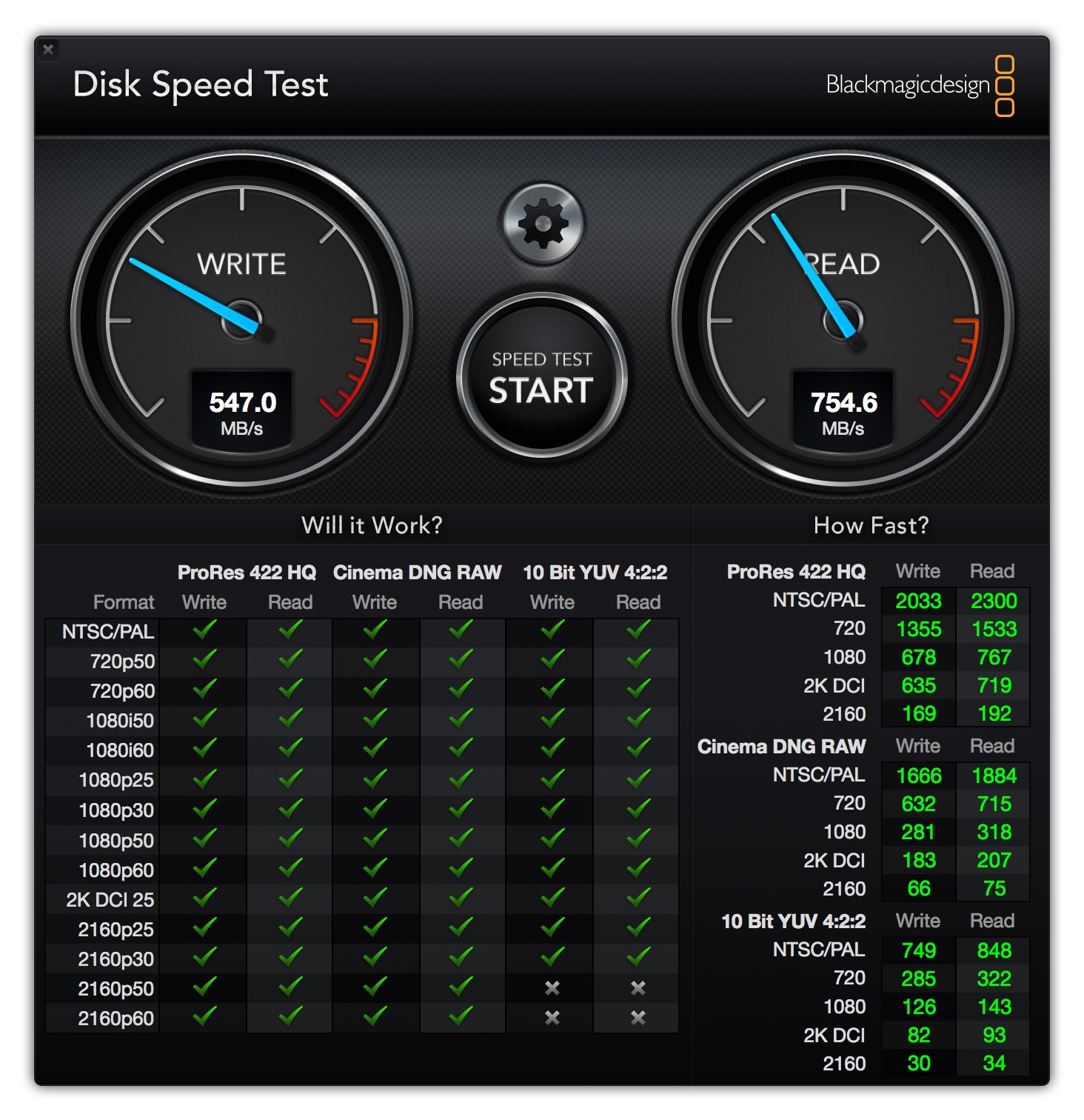 Akitio’s Thunder3 Duo Pro also features a USB-B port for connecting to machines without Thunderbolt 3 ports. USB connectivity will put a cap on the unit’s throughput, but it’s nice to have it as an option.

I appreciate the Thunder3 Duo Pro for its added amenities, which not only include the mentioned USB port and hardware RAID, but also a fan control switch that allows users to disable the unit’s cooling fan. A cooling fan is nice when there’s spinning platters generating heat, but when using 2.5″ SATA solid state drives with no moving parts, you can probably get by without one. 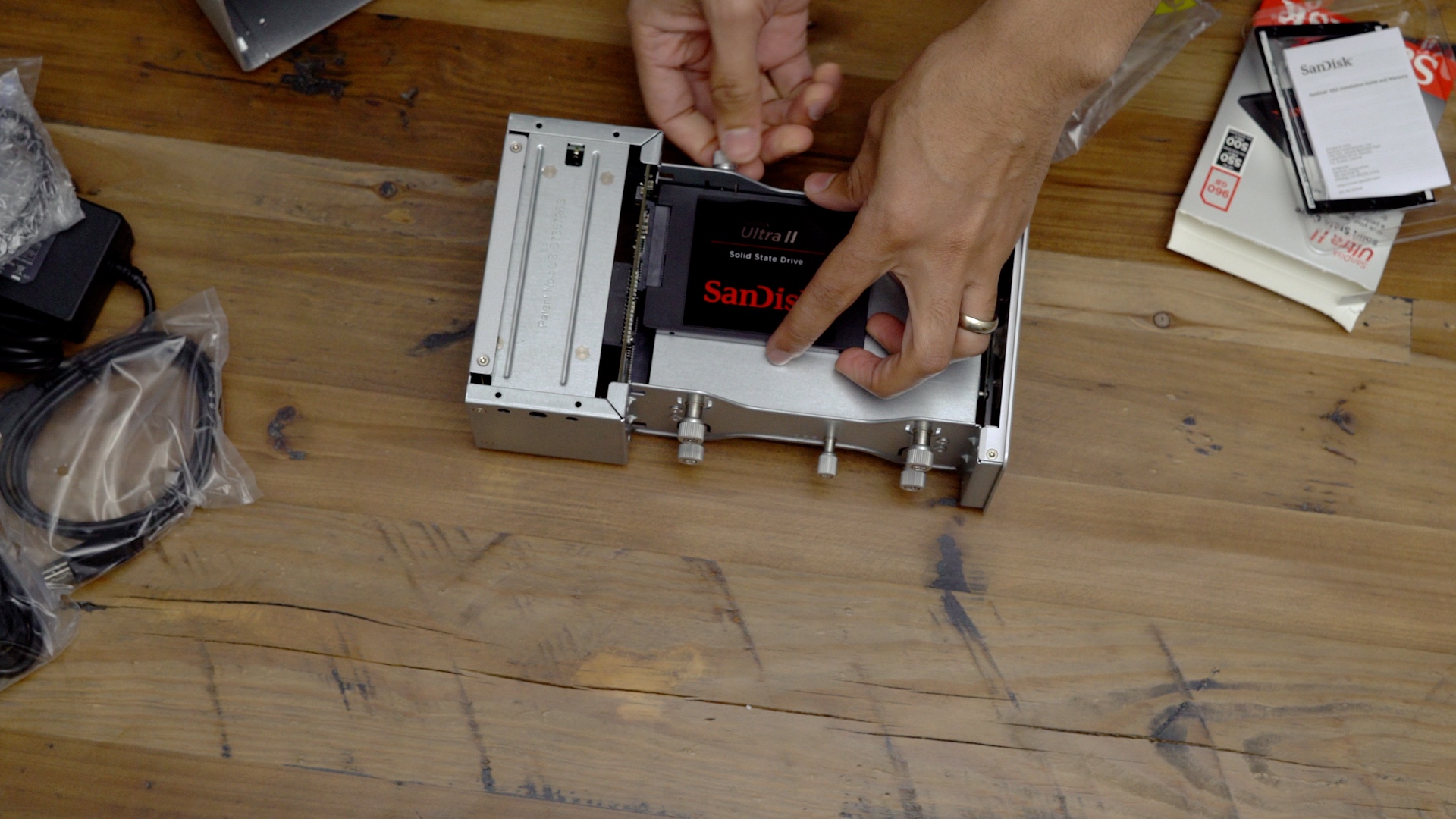 Besides, the aluminum enclosure is dense and does a good job of keeping the unit cool, fan or no fan. These are solidly built units with thick aluminum sides. Both the Duo Pro and the Quad feature perforated front panels that look like long-lost cousins of Apple’s cheese-grater Mac Pro. But the presence of chamfered edges on the Duo Pro help to dress up the smaller unit a bit more than its larger brethren.

The Duo Pro is also half the size of the Quad, which may be more ideal for tight workspaces. Just keep in mind that these enclosures are meant to accommodate both 3.5″ disk drives and smaller 2.5″ versions, hence the need for all of the room.

Akitio makes the Duo Pro in either diskless, or 2x1TB configurations. The unit can accommodate up to 16TB of storage, with each drive maxing out at 8TB.

As mentioned, the Quad is two times larger than the Duo Pro, and it’s got a carrying handle to help move it around. It also features a much larger power supply that attaches to the unit via a 6-pin molex connector. The two units look similar, but I’d say that the Duo Pro is hands-down the better looking device. 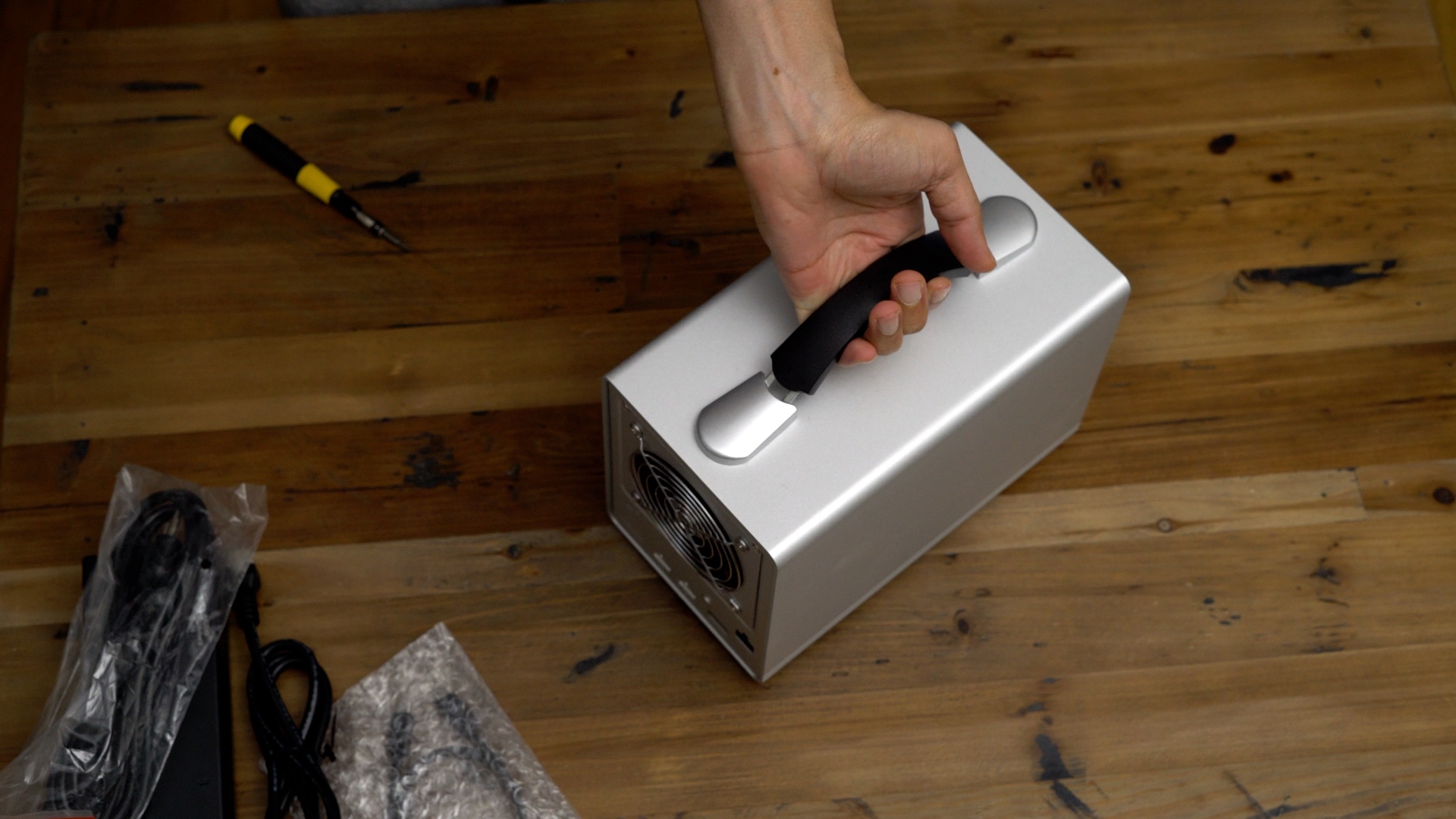 It’s also slightly more time consuming to install disk drives inside the Quad when compared to the Duo Pro. While the Duo Pro features convenient hand-turned screws, the Quad requires operators to use a screwdriver to attach the drives to each bay. 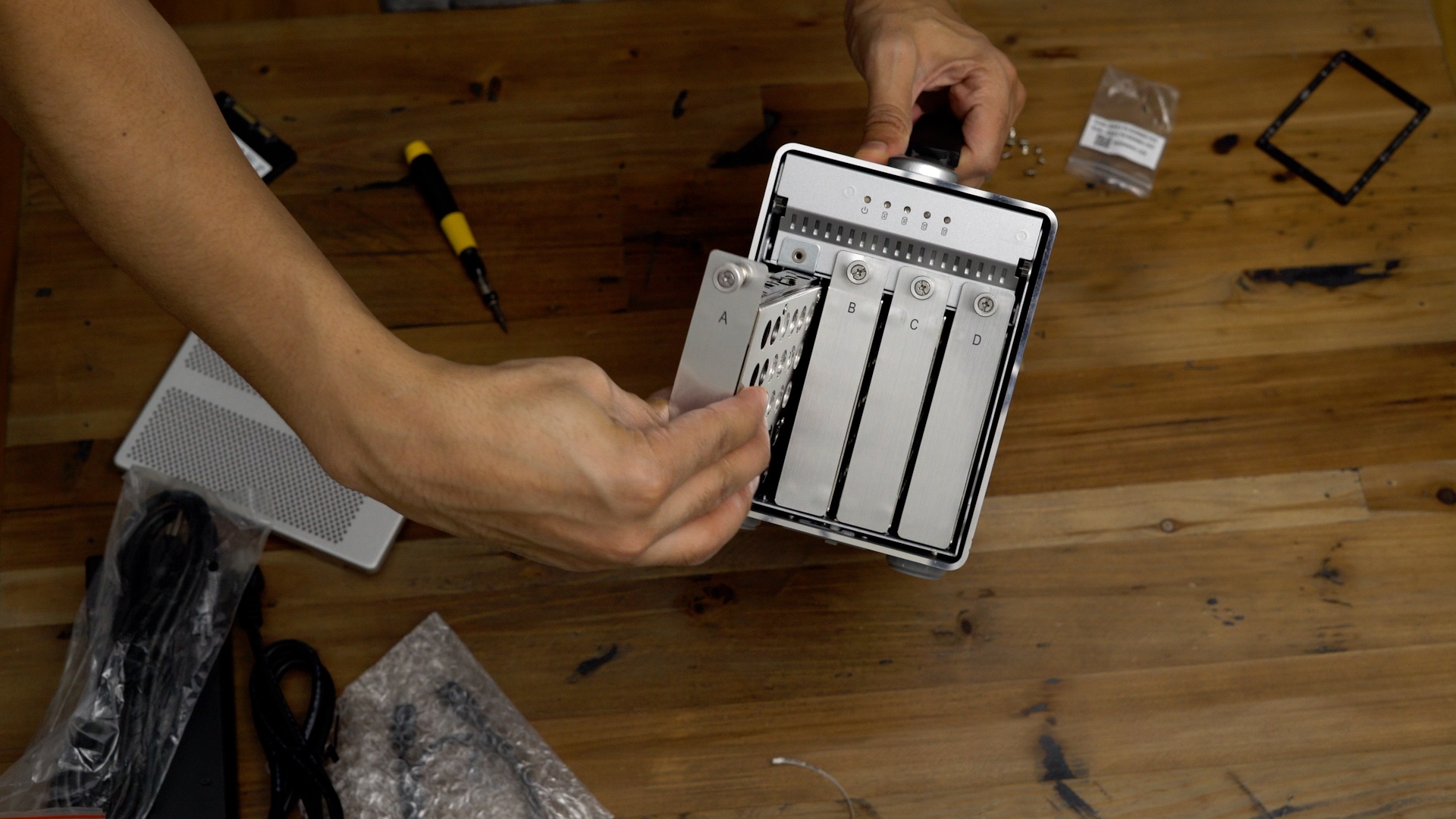 Along with the size and power differences, you’ll notice that there is no hardware RAID option on the Thunder3 Quad. If you wish to setup RAID, you’ll have to do so at the OS level, which means a visit to macOS’ Disk Utility to establish a new RAID array via File → Raid Assistant. Again, I opted for RAID 0 in order to test out the speed potential of the Thunder3 Quad. 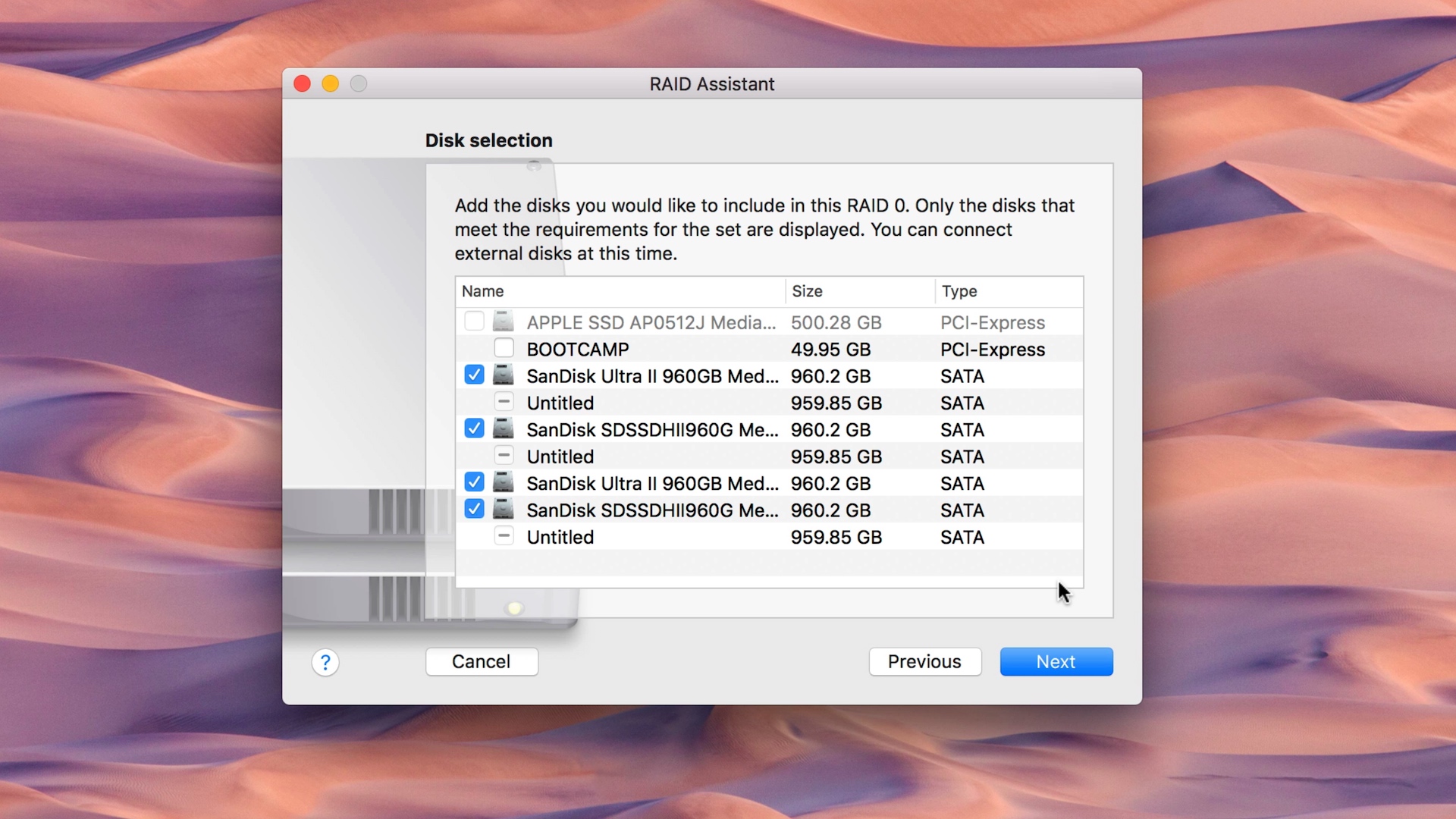 Speeds for both read and write well exceeded 1000 MB/s, which means that if speed is the most important factor, the Quad handily beats the Duo Pro. 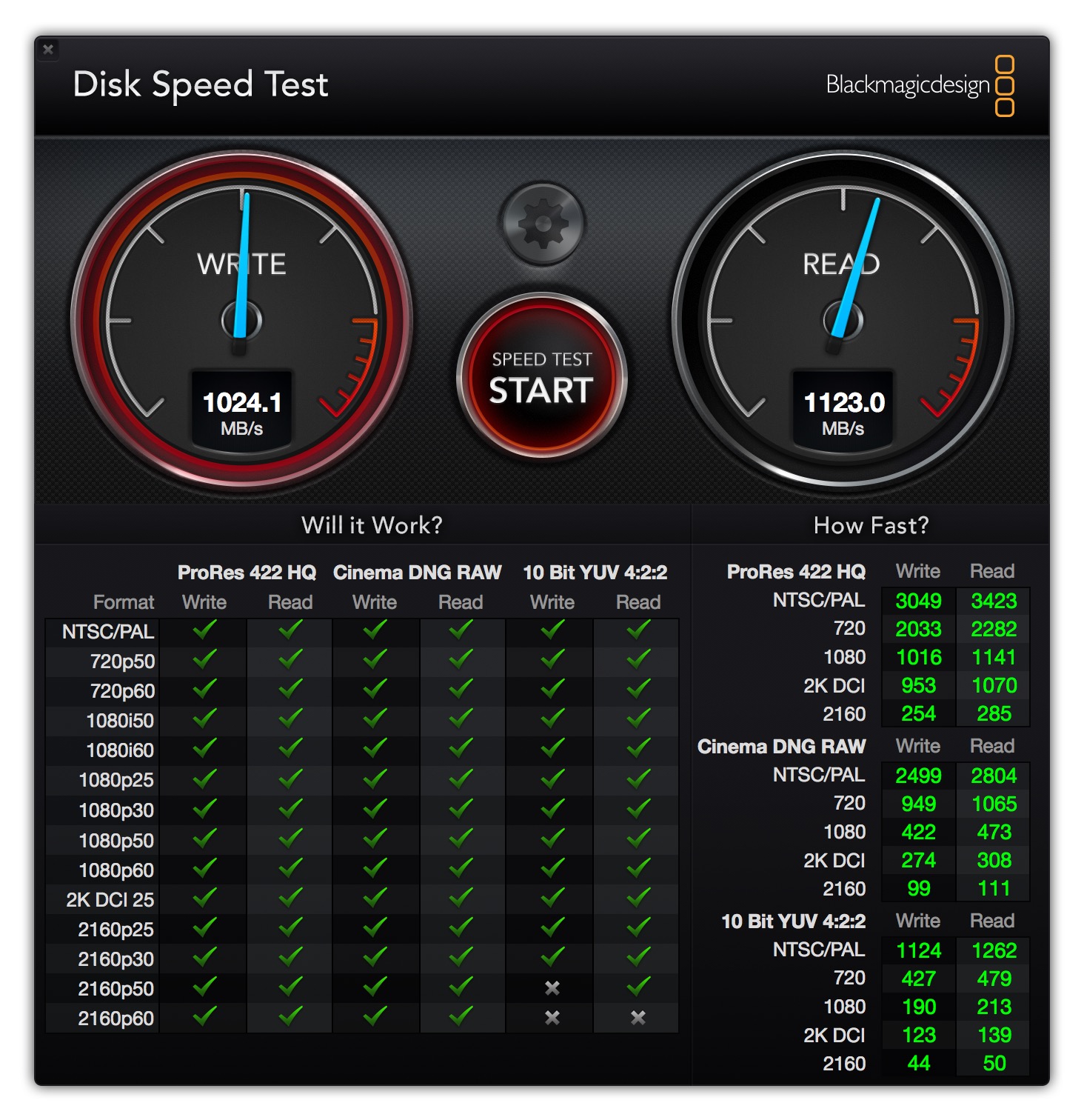 Although one might expect the speeds to be even higher given the Thunderbolt 3 interface headroom, along the speed of a single SanDisk SSD, Akitio states that the maximum transfer speed is limited by the PCIe to SATA controller. Due to this limitation, the maximum transfer rate for a RAID 0 configuration with four SSDs is about 1375 MB/s, even though the Thunderbolt 3 interface is capable of speeds much faster than that.

Still, 1000+ MB/s for both read and write on an external drive is nothing to hang your head about. It translates into some seriously impressive real world performance when it comes to file transfers. For example, macOS reported that I could transfer nearly 300 GB to the Akitio Thunder3 Quad enclosure in just over a few minutes – macOS was a little bit on the generous side when it comes to time estimates, but it wasn’t too far off from that. 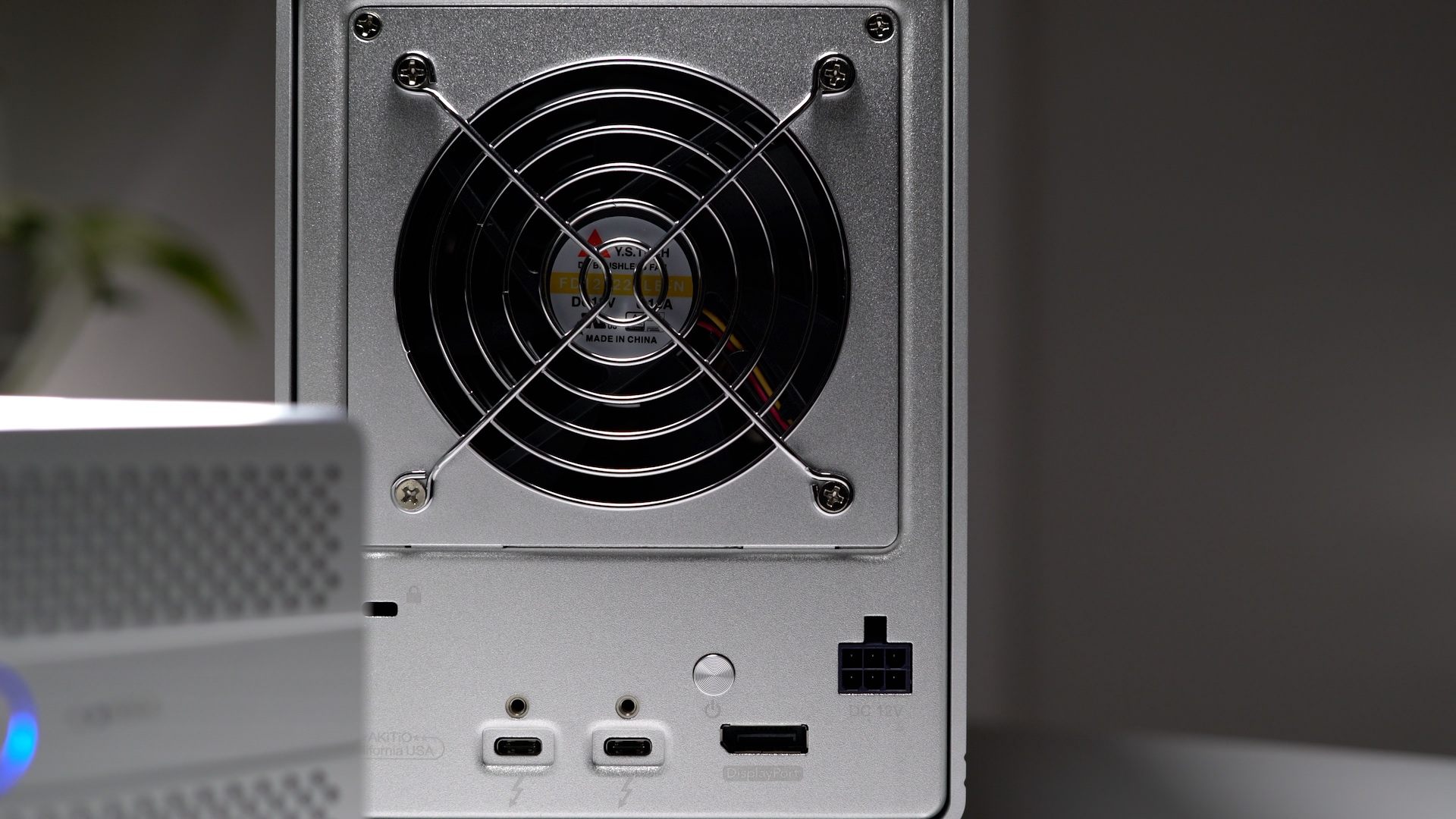 As someone who’s overly sensitive to noise, I was a little disappointed to learn that there is no fan switch on the larger Quad. Instead, you’re forced to listen to the slow 1900 RPM whirl of the unit’s fan, which produces 25 dB(A) of noise. I would normally simply unplug the fan’s power connector from the board itself, but it’s obscured by the SATA controller inside of the enclosure. If you’re really sensitive to fan noise, then you’ll probably want to sit the Quad on the floor, though that means you’ll need a significantly longer Thunderbolt 3 cable to make such a scenario possible.

At the end of the day, both units perform well when it comes to speed, but if I had to choose only one, it would likely be the Akitio Thunder3 Duo Pro. Not only do you get a more versatile hardware RAID controller, but you get fan control, an added USB port for legacy connectivity, and a smaller, sleeker, better-looking design. Sure it’s not as fast, but it’s probably fast enough to handle 4K video editing workflows with ease, and most likely fast enough to handle anything else that you plan on throwing its way.

Again, you can find all of the Akito Thunder3 products for sale on Amazon. What do you guys think about the Thunder3 Duo Pro and the Thunder3 Quad? Sound off in the comments with your thoughts.