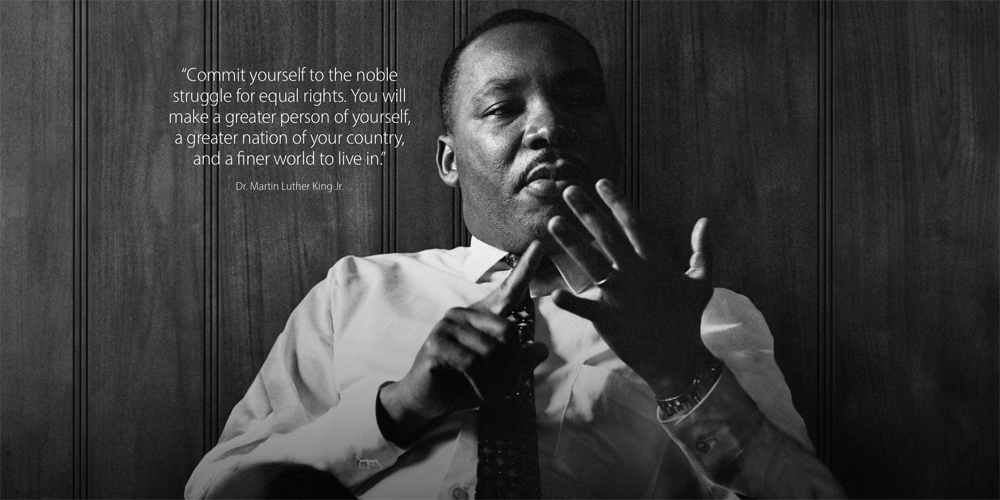 Apple is commemorating Martin Luther King Jr Day by devoting its homepage to a full-page photo and quote.

Commit yourself to the noble struggle for equal rights. You will make a greater person of yourself, a greater nation of your country, and a finer world to live in.

Tim Cook also tweeted in honor of Dr King, who led the non-violent civil disobedience protests that played a crucial role in advancing civil rights in the USA …

Martin Luther King Jr Day is a federal holiday observed on the third Monday of January, which this year follows one day after King’s birthday. The holiday was signed into law by President Reagan in 1983, and first observed in 1986.

Resistance to the holiday by some states meant that it was not officially observed in all 50 states until 2000.

Tim Cook tweeted that ‘we honor #MLK by working to help achieve justice and equality,’ and including a quote by King which paraphrased one used by President Calvin Coolidge in a 1925 address, ‘No matter by what various crafts we came here, we are all now in the same boat.’

We honor #MLK by working to help achieve justice and equality. "We may have all come on different ships, but we're in the same boat now.” pic.twitter.com/dVQfg3CTSd

King’s most famous speech took place on the steps of the Lincoln Memorial during the 1963 March on Washington for Jobs and Freedom. In it, he repeatedly used the phrase ‘I have a dream’ to describe his hope and vision for the future of America.

"Everybody can be great, because anybody can serve." With Apple volunteers at Stege Elementary in Richmond, California this #MLKDay pic.twitter.com/Rwjhyjrc6F

Just finished my #MLKDAY service at Stege Elementary in Richmond. A day on, not a day off. Thank you Dr. King. pic.twitter.com/8SOdCOaNYk