Final Cut Pro Diary: A video novice takes the step up from iMovie

I’ve been a photographer since I was 14, but am very much a novice when it comes to video. I’ve used bicycle-mounted action cams to put together some basic cycling videos, but these were nothing more sophisticated than taking clips straight from the camera, importing them into iMovie and adding cross-dissolves.

In an age when tech writers are increasingly expected to be videographers too, I decided it was time to take the plunge into the world of moving images. Although iMovie is a remarkably capable piece of software, I reckoned I was inevitably going to want to take the step up to Final Cut Pro at some stage, so I might as well make the transition now, rather than have to learn everything twice.

If you’re also a basic iMovie user with ambitions of getting to grips with more professional video production, you may enjoy sharing the journey with me. And if you’re an accomplished FCP X user, I’m sure that I and others in my position would love to hear your top tips …

There’s good news and bad news for anyone making the transition from iMovie. The bad news is that it isn’t cheap: you’ll be swapping a free app for one costing $299.99. In an era when we’re used to paying as little as a dollar for an app, this is undeniably painful – and I must admit I winced when I pressed the button.

The good news is that, while iMovie is the consumer app and Final Cut Pro X the professional one, their user interfaces are actually remarkably similar. This isn’t surprising as Apple developed iMovie essentially as a cut-down version of FCP, and it wanted to provide a tempting upgrade path for those who get more seriously into video.

So while FCP can do significantly more than iMovie, I was pleased to find that the basic layout is much the same, and the process of creating very simple videos likewise. I was able to create my first Final Cut Pro X video right away, without delving into user guides or tutorials.

Here’s a look at the two – iMovie: 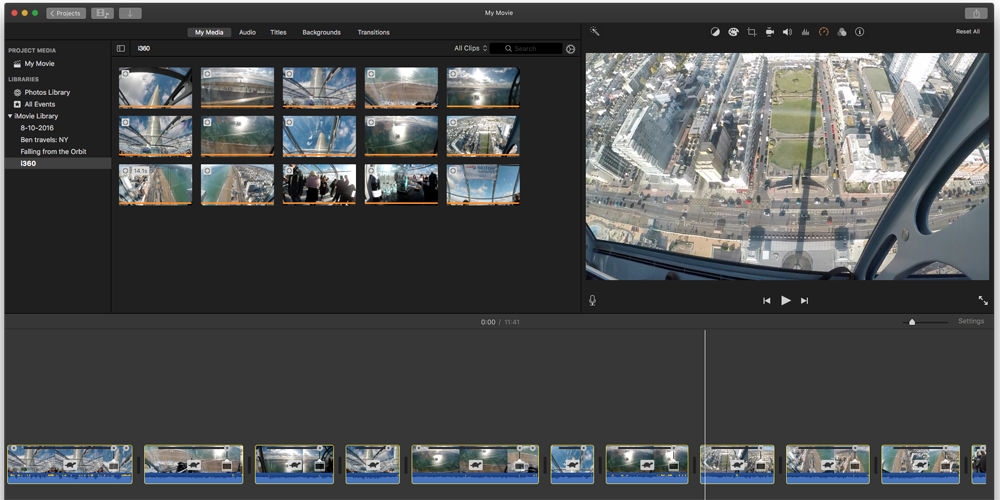 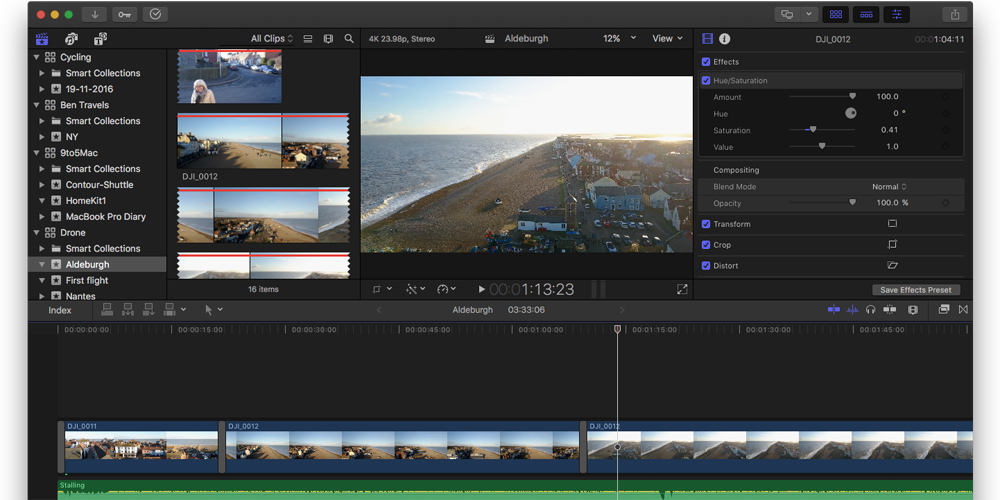 There are a few things in different places – like transitions between clips – but anyone used to iMovie will quickly learn to find their way around the basic features of FCP.

Keyboard shortcuts are not identical, though they do have similarities, so if you’re used to these in iMovie, you will need to learn the new ones for FCP. Fortunately, as a very basic iMovie user, I wasn’t making much use of these, so could jump straight into learning the FCP ones.

I decided to make life easier for myself by buying a keyboard overlay. There are new ones out for the 2016 MacBook Pro, but as I do most of my video editing at my desk, I opted instead for one for my Magic Keyboard. My hope is that this will teach me the shortcuts and that I’ll then be able to dispense with the skin – we’ll see how that works out!

While I was quickly able to get to grips with the basics, I of course wanted to learn how to take advantage of the greater capabilities of FCP, so I signed up for one of the two free workshops available in Apple Stores: Final Cut Pro X for Storytellers.

Free workshops are one of Apple’s secret weapons on the marketing front. Anyone can come along and take part, without even needing to own the product: the stores offer loan machines with the software installed for anyone who doesn’t have their own.

I did the one in London’s Regent Street store, and it was absolutely superb. The standard material presented taught me a lot, and the tutor was really helpful in answering individual questions and offering one-to-one assistance during the workshop.

The project I was working on at the time was actually a photo slideshow, and my focus then was in addressing some of the questions I had about that, so I’m actually planning to repeat the workshop with some video footage lined-up so I can make better use of some of the techniques taught. The workshop packed in so much material that much of it will benefit from repetition, especially as I want to learn much more about color correction and shadows & highlights adjustments in video.

I also plan to take the second FCP workshop, that one on file-management, but early Feb is busy for me, so I’ll need to check out dates for later in the month once they are available.

You may have read my review of Contour’s ShuttleXpress: a hardware device that combines two wheels with five buttons. One wheel allows you to scroll through your video at a range of different speeds, while the other allows you to move precisely, frame-by-frame. You can assign the buttons to any keyboard shortcuts you like.

This is an upgrade I’d recommend to anyone: it makes the process of cutting clips so much easier. There’s also a more sophisticated ShuttlePro V2 that provides 15 buttons. That seemed a bit over the top for my current skill level, but I may upgrade to that later.

I mentioned earlier that review videos are one of the main reasons I want to get more seriously into video, and while my desk may have made a suitable setting for the very basic videos I have made in the past, I wanted something more visually interesting.

I bought five desk-sized acrylic sheets, in black, purple, yellow, lime green and orange, together with a couple of sheets of lightweight stiffening board. I lay the board across the arms of the sofa in my office, then pull it away from the wall so I can shoot from behind it. With window light behind me, I don’t need any lighting so long as I’m shooting in daylight, and the acrylic makes for an interesting reflective surface.

You may already have noticed these sheets in my recent review and diary posts, as I use them for both still photos and video.

I learned one lesson right away: dust both products and acrylic sheets to within an inch of their lives before shooting! For the ShuttleXpress video, I literally had to trash the entire first take, as what were invisible specks of dust when viewed from above, or on the tiny camera viewscreen, were very noticeable and ugly when zooming in for close-up shots. Cue much dusting and a reshoot.

My more skilled and better-equipped colleagues have all kinds of gizmos that allow them to take moving shots of static products, zooming in or panning past with enviable smoothness. My own first attempts at this were not pretty! Check out the amateurish zoom-in during the first few seconds of this video …

Despite using manual focus, the focus point shifts as the focal length changes, so I needed to manually attempt to keep up – which didn’t work well.

My second thought was that if I shot the video in 4K, I could shoot static video then zoom-in within FCP for the 1080p output. But my only 4K cameras are my iPhone, iPad and action cams – none of which allow the shallow depth of field needed for shoots like this. I’m waiting for Sony to send me its shiny new a6300 for review (the successor to the excellent a6000 I use at present), but there’s no sign of it yet.

I then realised I was missing the obvious: if I was going to do all the movement simulation in FCP, then I didn’t need video footage: a still photo would work just as well. The 6000×4000 resolution of the a6000 stills left me bags of room to digitally pan and zoom within a 1920×1080 video.

So, this was the approach I took in my most recent video, for my Smart Home Diary. Check out the first 30 seconds of this video, where all the product shots are stills.

I adjusted the duration of the photo by selecting it, then right-clicking and selecting Change Duration. One non-intuitive part of this: you simply type in the time – for example 5.00 for five seconds. There’s no visible prompt for this.

I then selected the crop tool directly beneath the video window, on the left, to select Ken Burns effect. Unlike iMovie, you get total control over this effect, so can fine-tune both zooms and pans.

I had more lessons to learn with the background. I did quickly realise that minimizing all windows to reveal desktop photos made for a much more pleasing out-of-focus background than screens with lots of windows open. However, adjusting the angle of the acrylic sheets to stop the bulbs rolling around resulted in a wonky-looking desk behind.

This is the sort of thing I’m used to spotting when taking still photos, but with more things to think about now it can be easy to lose track of the basics.

Another issue seen here is that my ‘OCD desk’ – which has holes drilled into it to take all the wires out of sight, and an under-shelf to hold power bricks, USB hubs and external drives – allows the wires beneath to be seen from this angle, spoiling the otherwise clean look.

For the next video, I need to use some books to lift the acrylic surface high enough to hide the area beneath the desk. I also need to wheel the chair out of the room and remove the glass from the desk – again, attention to background that I’m needing to re-learn in this context.

Overall, though, I’m very happy with my pop-up studio. The sheets live in a spare room and are light enough to be easily moved in and out of the office; the reflective surface looks good, and the range of colors allows for variety between videos; and the window light is perfectly adequate. I’ll probably add lighting at some stage, just for the flexibility of shooting when it’s dark, but for now this setup does the job well.

Finally, anyone who records videos, podcasts or similar will tell you that a decent-quality microphone is crucial, but you don’t have to spend a fortune. A colleague recommended the Blue Snowball mic as a good starting-point, together with the popfilter.

My approach to narration has been to shoot all the video first, then make bullet-points for the voice-over and to record it within FCP using Window → Record Voiceover. This allows you to watch the video as you speak.

Again, I learned a valuable lesson here: shoot longer video clips than you think you’ll need in case you have a lot to say. You can always trim video down, but you can’t magic up extra footage you didn’t shoot. This is a good general lesson for video: always shoot long, so you can be sure of having enough material. It’s a lesson I’ve also learned with my drone, which I’m sure will feature in a future FCP Diary piece.

So, that’s my Final Cut Pro journey to date. If you have tips and tricks of your own to share, I’d love to hear them. Equally, if you are someone just starting out in FCP yourself, do share your experiences.