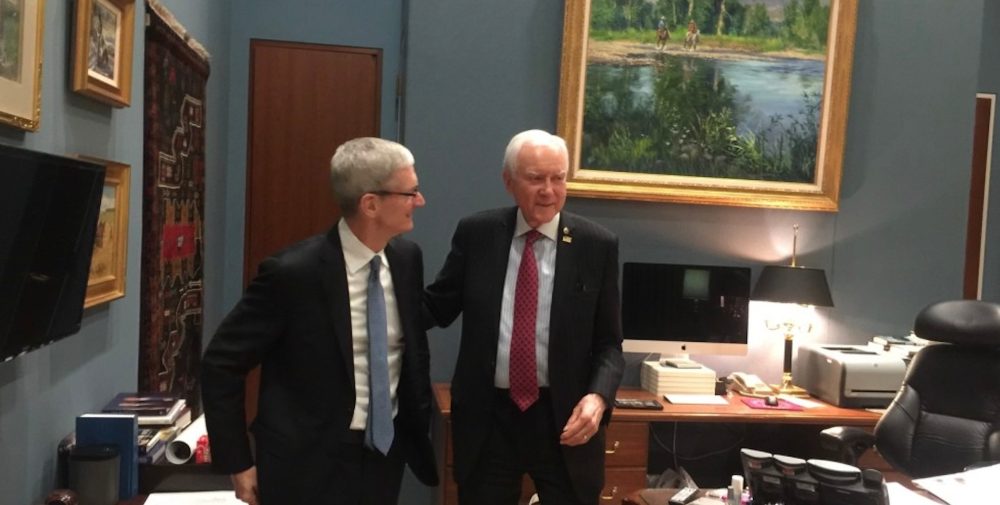 Tim Cook has held a pair of notable meetings in Washington D.C. this week according to reports. First, BuzzFeed News reports that Cook met with Senator Orrin Hatch on Capitol Hill, while Politico reports that he also went to dinner with Ivanka Trump and her husband, Jared Kushner. Apple VP of environment, policy, and social initiatives Lisa Jackson was also in attendance at the dinner.

Cook’s meeting with Senator Hatch, a republican from Utah, is the latest evidence of strong connection between the two. Last year, Cook held a sit-down interview with Hatch, discussing a wide-range of privacy and security topics. Hatch sits on the Judiciary Committee and antitrust panel, while he also leads the Senate Republican High-Tech Task Force.

In a statement to BuzzFeed News, Hatch stated that his meeting with Cook focused on ways to grow the economy and tech industry. More specific details are unclear at this point.

“During today’s meeting with Apple CEO Tim Cook, we discussed ways to grow the economy and our tech industry, as well as his recent visit with me in Utah,” Sen. Hatch said in a statement to BuzzFeed News. “Given the issues I work on as chairman of the Senate Republican High-Tech Task Force, it’s especially useful to listen to innovators like Tim.”

According to the same report, Cook met with the leadership of the Department of Veterans Affairs this week to discuss ways Apple could help veterans, such as with increased hiring and promotion.

Finally, Politico reports that Cook and Lisa Jackson went to dinner with Ivanka Trump and Jared Kushner, both of whom have instrumental roles in the new Trump administration. Kushner, who was often referred to as President Trump’s right-hand man during the campaign, is a Senior White House Advisor in the new administration.

At this point, it’s unclear what was discussed at that dinner. While politics are presumed to have played a role, it’s possible it was more of a friendly dinner than a business one. Lisa Jackson served in the Obama administration as the EPA head from 2009 to 2013, while she also sits on the board of the Clinton foundation.

Tim Cook making the rounds in Washington is nothing to be too surprised about and will likely continue to occur as we move forward. In December, Cook attended a meeting of tech leaders with Donald Trump, discussing manufacturing, job creation, China, and more.