The Iconfactory is today launching Linea, a straightforward digital drawing app. It’s available now for iPad in the App Store for $9.99. With only four brushes and a maximum of five layers, the app focuses on essentials. It’s a replacement for the digital sketchbook you might carry around in your bag to explore ideas or casually draft compositions.

The whole UI is refined to maximise drawing space and it doesn’t let you get bogged down in customization options. Linea was designed with the Apple Pencil in mind; you can erase with your finger and draw with the Pencil without switching tools. Here’s my hands on …

The main screen of Linea shows a grid of folders; each folder contains a series of pages and can be named to help with organization. Tap on a folder to expand, tap on a page to continue editing it, or press + to add a new page.

When in the drawing canvas, Linea fits the entire interface into two single-column bars on the left and right hand side, and a couple of ancillary buttons on the top and bottom. The universal focus of this app is to be as simple as a real-world sketchpad with the convenience of digital art. 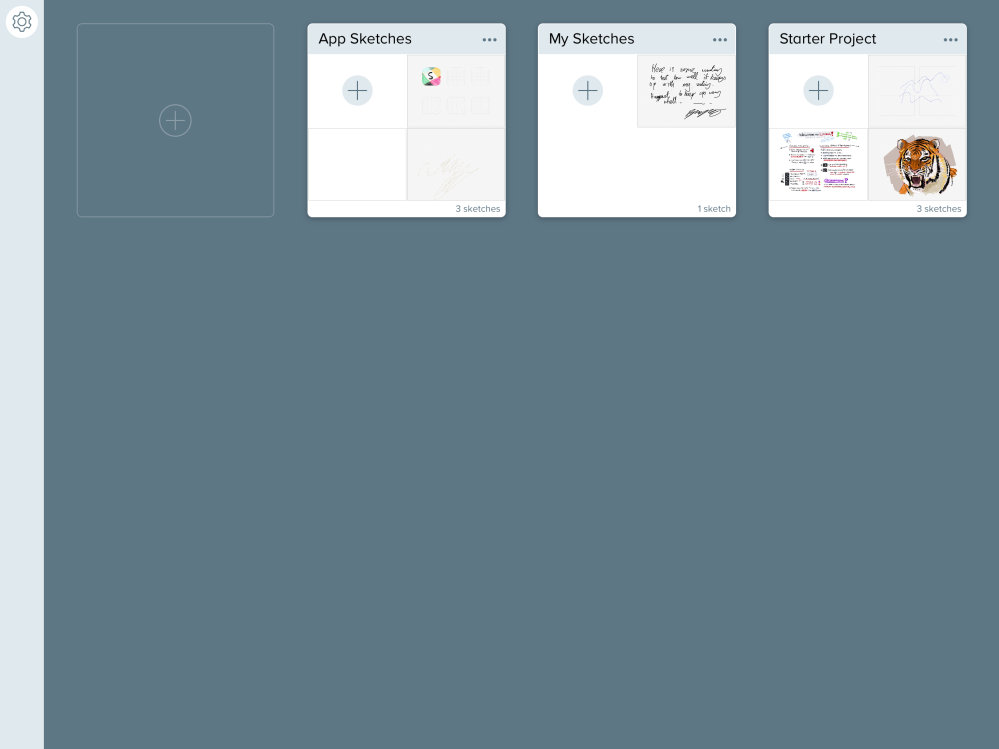 Drawing is as intuitive as you would expect. With an Apple Pencil connected, the stylus makes the ink/pencil marks whilst your finger acts as an eraser — like a whiteboard. The Pencil/touch combo really makes the iPad Pro shine: the efficiency of being able to rub out instantly without switching modes or tools cannot be understated.

As you might expect, zoom and rotate is handled by the usual two finger pinch gesture. You can zoom up to ~3000% and then tap a button in the top-right to instantly make the canvas fit the screen again. A really clever subtlety is that this button is also a live indicator; The Iconfactory calls it a compass. It shows the angle of rotation and an approximation of zoom distance. The compass lets you know at a glance if you are right side up. 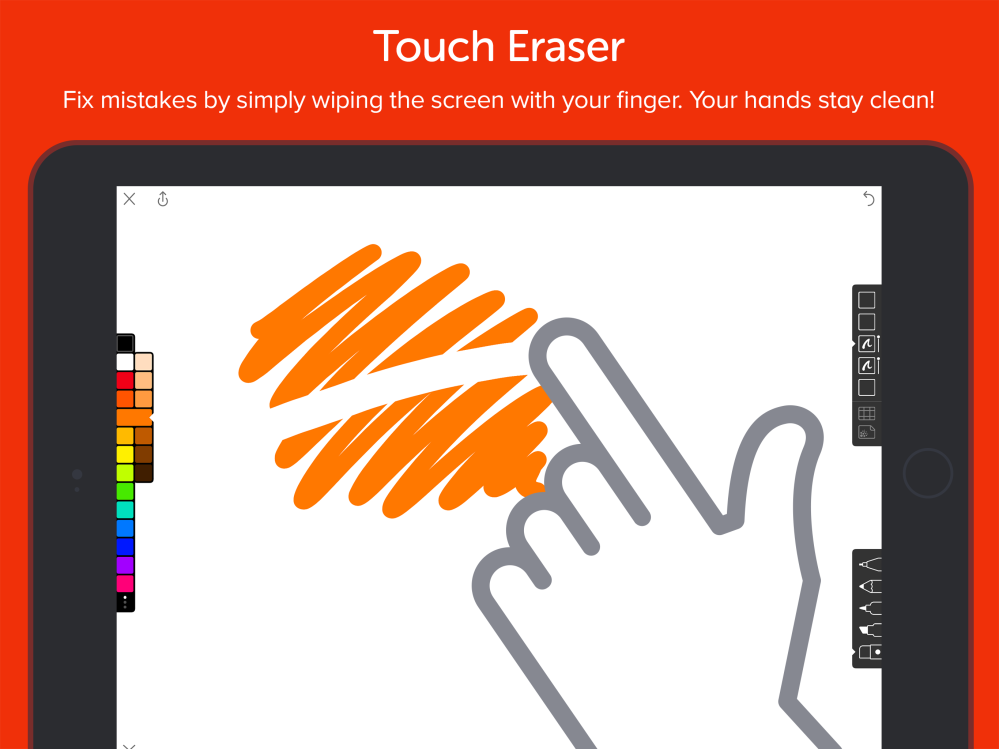 If you ever make a mistake with your brush, a two-finger tap removes the most recent stroke. Unfortunately, the undo history does not persist across application launches. Unlike an app like Procreate which touts the countless number of brushes it offers, Linea again takes a streamlined approach. It includes five tools total, four if you don’t count the eraser.

There’s a technical pencil, a classic sharp pencil, a pen, and a wide marker. All of the tools are pressure sensitive so you can adjust the intensity and thickness by varying how hard you press the Apple Pencil into the display. You can vary the default size by double-tapping on the tool in the sidebar but that’s about it as far as customization of brush type is concerned. The point of Linea is to get your ideas sketched onto the canvas, not fiddle around with settings. 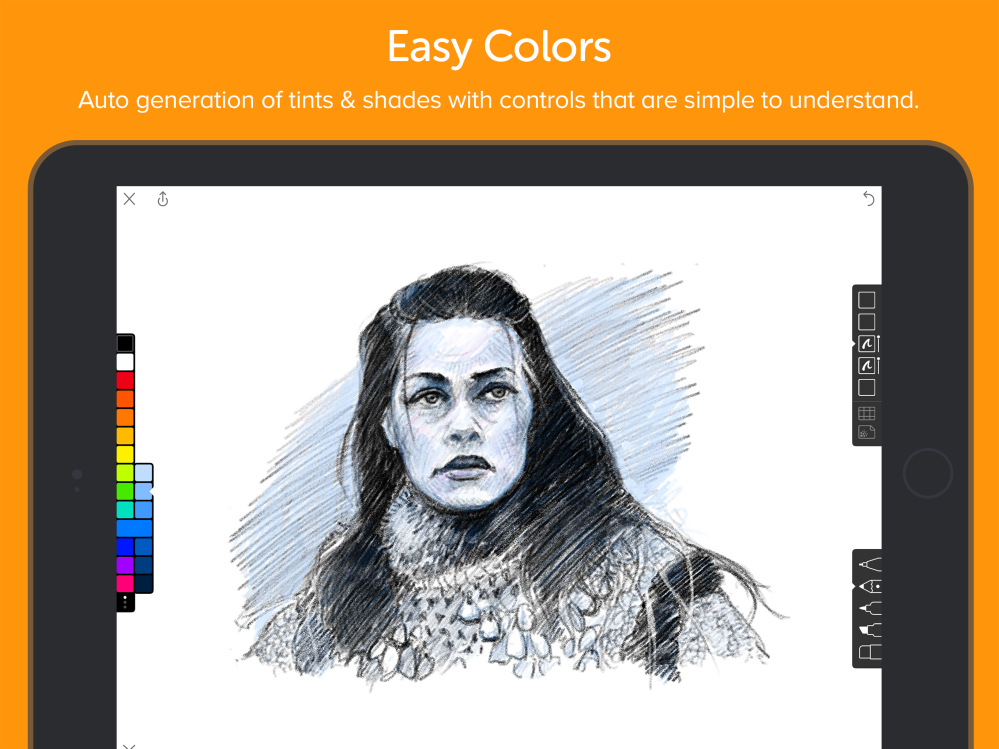 The color swatch in Linea is fantastic. The app comes with a plethora of predefined base colors and tapping on one selects it as well as revealing 6 related shades and variants. It fits a spectrum of color options into a very compact space. The color choices also never disappear (unless you explicitly hide the entire interface) so you can swap between colors with no hassle. A lot of competing drawing apps on iPad hide the color wheel behind a popover menu which means selecting alternate colors is a chore, involving at least three taps. Linea lets you add your own custom colors to the swatch but — quite frankly — it feels like you aren’t supposed to bother. The presets offer more than enough variety.

Linea incorporates a streamlined layers implementation, made possible by some tight constraints. You only have five layers total with the option to change opacity per layer. What’s neat is that you never have to worry about making new layers or removing old ones, which is really baggage of a desktop photo editor. Simply, the Linea UI always shows five layers and if you want to use them, you can. A layer either has content or it doesn’t. You can drag them around in the sidebar itself to rearrange the order. Tap on a particular layer to reveal a popover menu where you can clear it or temporarily toggle its visibility. 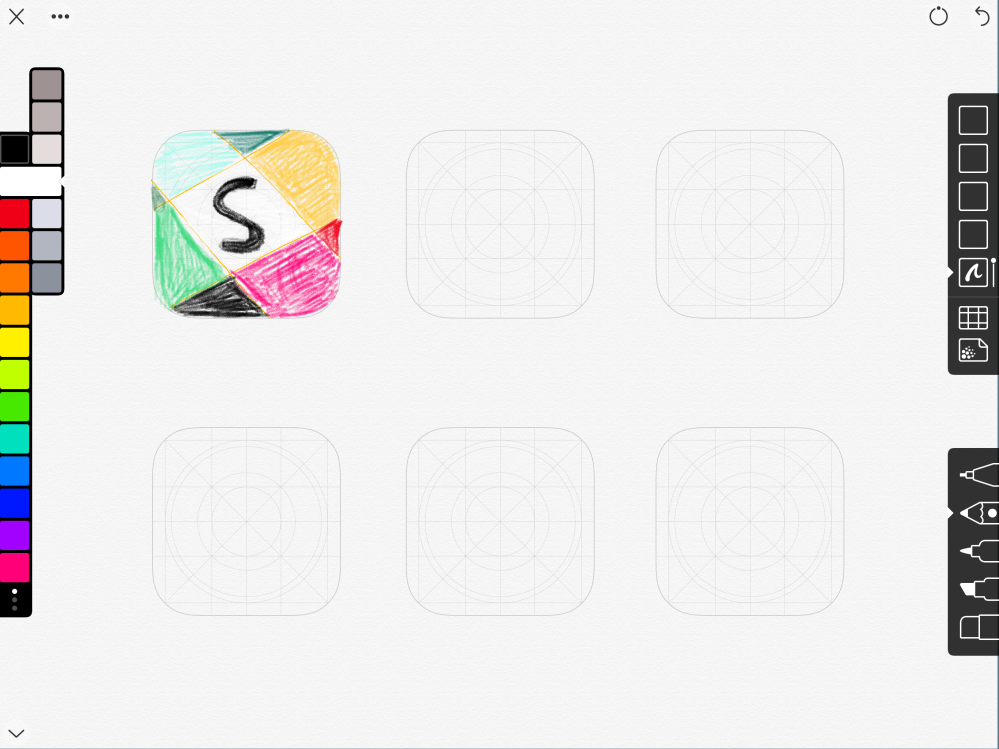 The app also features a variety of background options including isometric grids, faux textures and templates for designing comic book storyboards or iOS app icons. At any time, you can share a JPEG, PNG or (layer-preserving) Photoshop PSD of your page. You can also select regions to share if you want to send just one isolated doodle, not the whole canvas. Iconfactory wants to push a workflow where you get the initial composition made on the iPad, and then you refine it on a Mac with a high-end professional setup.

Taking into account the intentional focus on making a basic principles drawing app, there are a few areas I am left wanting more where the 1.0 first-version nature of Linea is apparent. One of my favourite features from Procreate is the ability to paste an image from the web as a layer, which I can then trace and sketch over the top of to make my ‘own’ version. 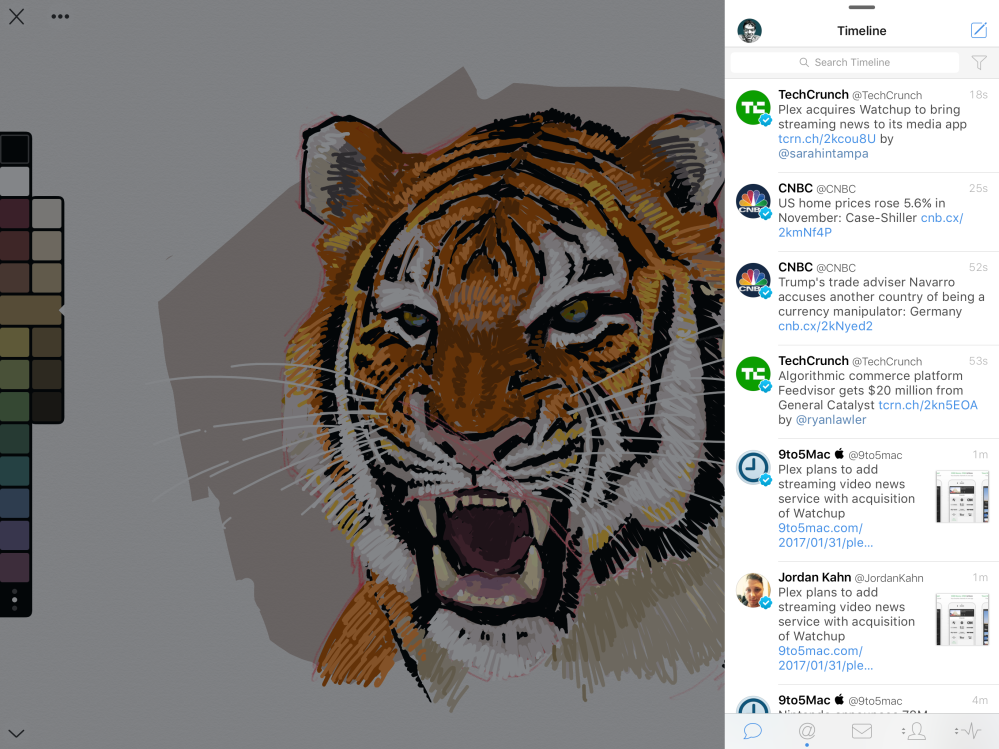 Another niggle is that Linea is full-screen only which means it cannot participate in iPad multitasking; side-by-side doodling and Twitter is something I had gotten very accustomed to. Occasionally, I noticed the app couldn’t keep up with my inputs, freezing for a beat, which I haven’t seen in other Apple Pencil cases. Obviously, this latter class of bugs will undoubtedly get fixed quickly as the developers get feedback from real customers.

Even with those complaints in mind, I have loved using Linea over the last few days. I’m not a serious artist, I just like sitting around doodling on my iPad whilst watching TV. I love being able to change colors without having to dig into a sub-menu. I am definitely going to keep using it; I have already moved it to a primary location on my iPad Pro’s home screen (it helps that Linea has a great home screen icon).

The overall app experience feels a lot like using the sketching mode inside the Apple Notes app, no-nonsense and hassle-free. When you are doing casual drawing, you don’t want to get bogged down with buttons and knobs and contextual drop-downs. You just want to draw. Linea lives up to its marketing slogan: ‘sketch simply’.

Linea is available in the App Store for $9.99. Find out more information on The Iconfactory’s website. Linea will run on any iPad that can run iOS 10, although an iPad Pro is recommended for Apple Pencil support. (I tested the app on the larger 12.9 inch iPad Pro.)