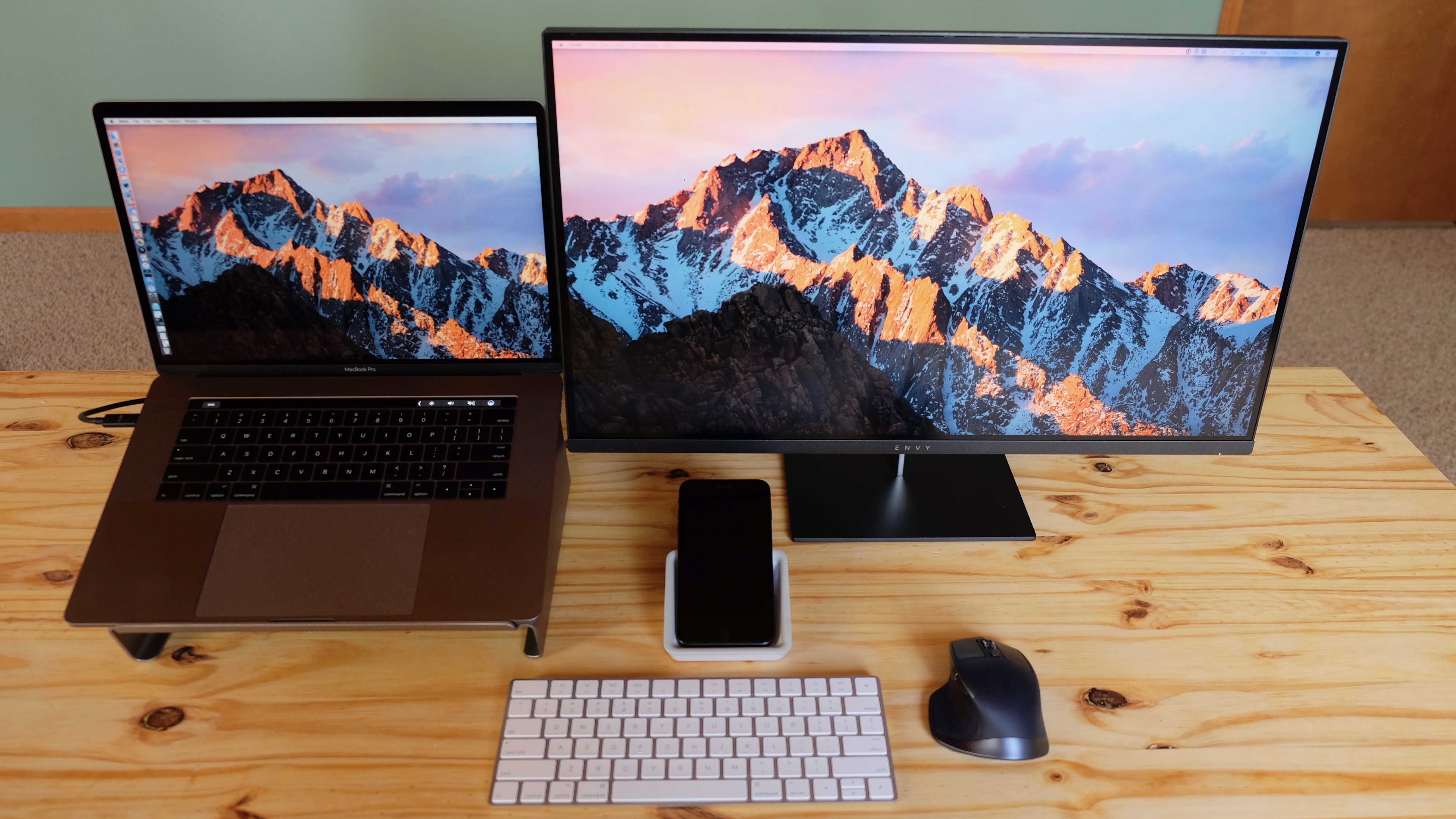 [Update: We’ve heard from two readers who recently ran into an issue where using the USB-C to USB-C cable does not work with this display and the 2016 MacBook Pro. Unfortunately, in one case, different cables and support from HP and Apple also didn’t provide a solution. Please share below in the comments if you have experienced the same or something similar.]

If you’ve decided to pass on LG’s UltraFine Display there are only a few other options when it comes to 4K USB-C displays. Jordan covered the best choices back in November and now all of these displays are available (with varying degrees of stock).

There are a few compromises that come along with the $500 ENVY 4K display compared with options like Lenovo’s ThinkVision X1 or LG’s 27UD88-W, but I decided to try HP’s ENVY 27 with price, design, and specs hitting a good portion of my wish list. Keep reading after the break to hear about my first week with this new display.

At first I thought the hard part was deciding what display to go with, but trying to get my hands on an ENVY 27 turned out to be more challenging. After launching in early December, HP quickly sold out of stock. I checked HP’s website daily as it was $625 on Amazon. Strange enough, the display showed up on Best Buy’s site for $450, but with no stock (and has disappeared completely now).

Then about two weeks ago I saw HP had one in stock on their site (literally one). I quickly ordered and got a confirmation for a successful purchase. The next morning I received an email saying the order was cancelled.

Fast forward three days and that repeated two more times. All HP support could tell me was their inventory system wasn’t working properly. Last weekend I happened to look at Amazon again and the price had dropped to $500, I immediately placed my order and received my display two days later.

With HP seemingly having trouble producing enough of these displays, you may have to keep an eye on both HP’s website and Amazon if you’re looking to pick one up. There don’t seem to be any other retailers carrying this unit for now. 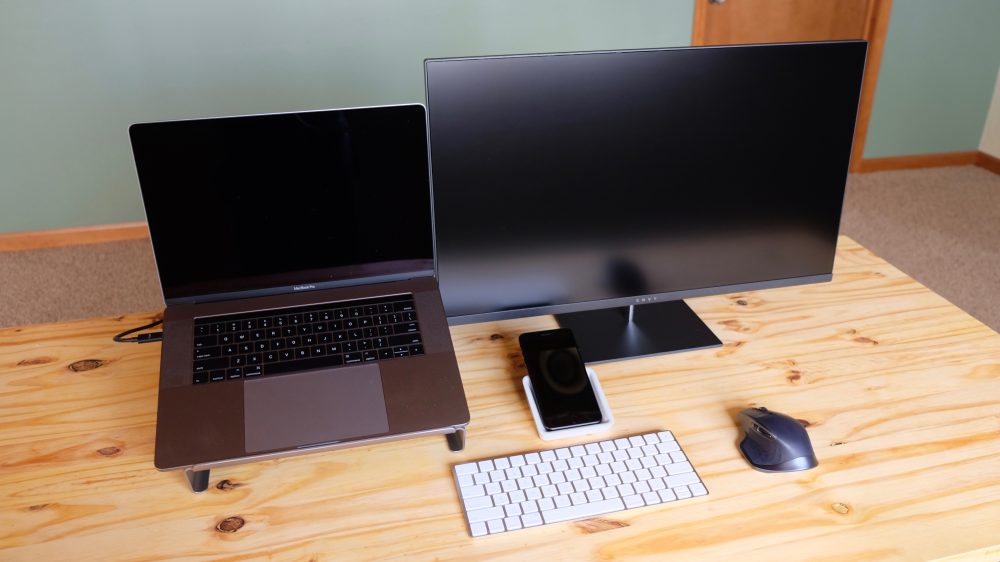 HP’s ENVY 27 features a 3840 x 2160 resolution at 60 Hz. This IPS display offers 5ms response time and a micro-edge bezel on three sides that provides a clean, minimal feel. The bezel is almost exactly the same as the new MacBook Pro’s sides and the screen can tilt from -5 to +25°.

Something that sets this screen apart from the competition (for better or worse) is HP’s decision to use an ‘Advanced Haze’ finish on this display. After spending some time researching I discovered that Advanced Haze seems to be a hybrid between a matte and glossy finish. Adam Simmons gets into the nitty gritty of display finishes beyond just glossy and matte in this article.

Although HP couldn’t tell me when I called for details, Simmons says that matte finishes often have a haze value of 24-28%. Since HP offers an ‘Anti-Glare,’ ‘Advanced Haze,’ and ‘Low Haze’ for their various products I’m guessing the ENVY 27 is one step glossier than a full matte finish (ENVY 27 is not available in any other finish besides Advanced Haze). 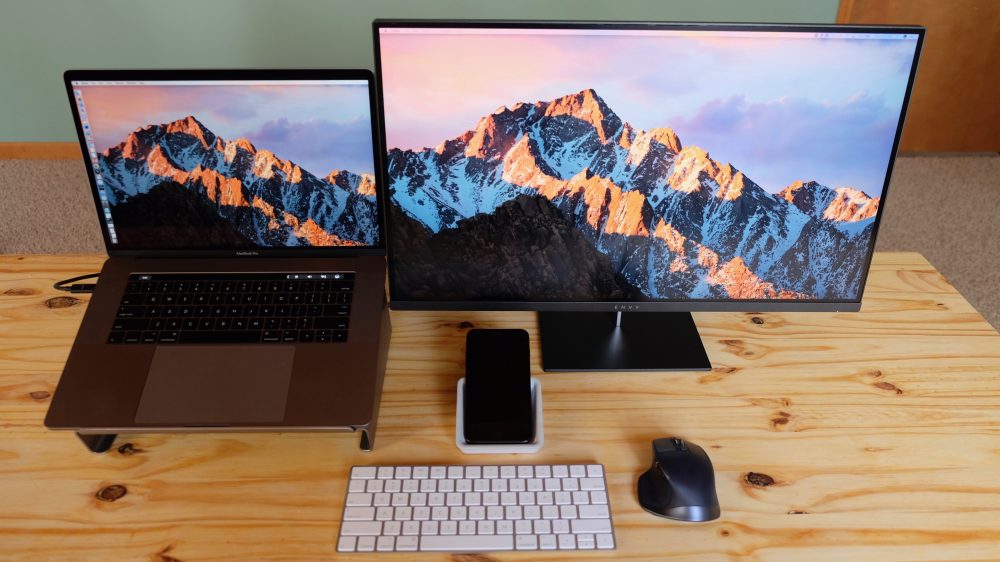 While the display does look very sharp and is a nice improvement over my 2011 iMac, it doesn’t feature P3 wide color gamut or 500 nits brightness like my 15-inch MacBook Pro or the UltraFine displays. In contrast, ENVY 27 features 99% sRBG and 350 nits brightness.

I’ve been using both my MacBook Pro and the new display at 75% brightness and I honestly can’t tell a difference between the two as far as the brightness. When it comes to colors, my MacBook Pro does produce a slightly more rich and vivid experience, however it isn’t distracting for me to use them side by side.

HP includes a 6-foot USB-C cable along with the same length HDMI and DisplayPort cables. VESA mount hardware is included along with documentation and an HP software CD (which isn’t needed). The power supply isn’t built-in to the display and it’s a decently hefty external one (mouse in photo below for reference). This may contribute to the monitor having a slim profile.

The display’s stand doesn’t come installed in the box, however it’s an easy job, no tools necessary. The base feels sturdy and is a few shades darker than my Space Gray MacBook Pro. The stem is a matte finished stainless steel. I wish they had brought the materials and build quality of the base to the rest of the display, but I keep reminding myself, this is a $500 product. The stem and base are easily removable if you decide to change your mind and mount your display down the road.

The first thing that surprised me when connecting my MacBook Pro for the first time was that ENVY 27 doesn’t automatically detect video input by default, so I had to switch the input manually (there are five physical buttons on the back, power and four buttons for navigating the display’s settings).

Once connected and I had the display’s settings adjusted, I was interested to see how fast the max 60W of power the display pushes would charge my 15-inch MacBook Pro (standard is an 87W power adapter). I was impressed to see that ENVY 27 gave a full charge in 2.5 hours. Another nice feature of this display is even when the display is powered off and your MacBook is sleeping it continues to charge your computer.

It doesn’t seem to be a problem for now, but it is worth noting that a warning message pops up sporadically when connecting my MacBook Pro with the following message: “A connected USB device is requesting more power than can be supplied by the display.”

One other slight concern is that I’ve seen a “This doesn’t appear to be a HP USB-C cable” twice now. Unplugging and plugging back in the cable that came with the display has solved it for now. 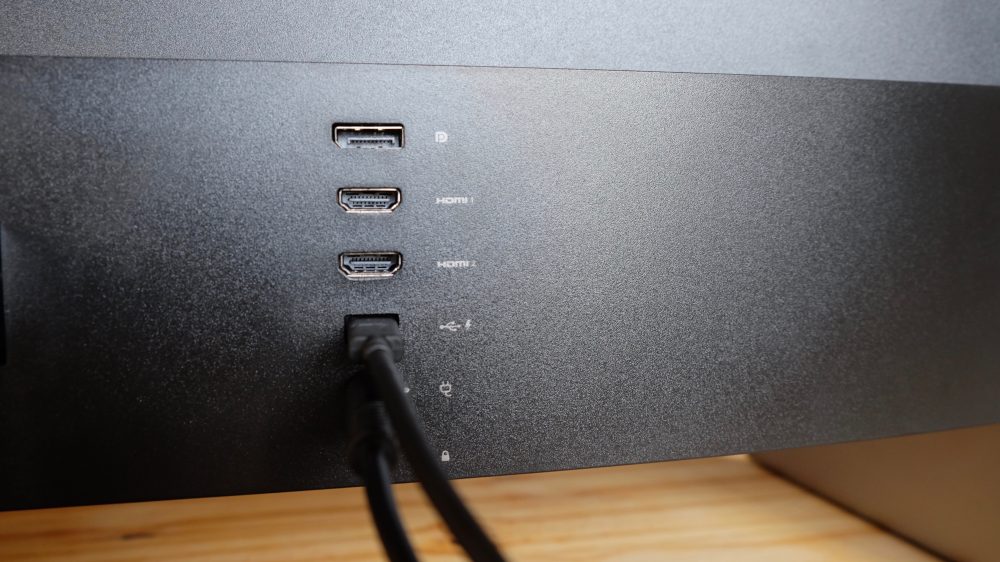 If you haven’t checked out the specs before you’ll notice in the picture above that I/O is one of the major compromises on this $500 4K display, it doesn’t even include a single USB-A port. Just one USB-C port, 2 HDMI ports, and one DisplayPort. For my use and workflow this isn’t a big deal, but is definitely something to consider before buying.

While we’re at it, we might as well cover the other trade-offs of this display. To bring it to market at $500 with 4K and USB-C connectivity HP also left out speakers and a camera. Many people use external speakers or wireless earphones, and don’t mind using the MacBook’s FaceTime camera, but these missing features paired with bare bones I/O could be a deal breaker for some.

On the plus side, I have been using this display with no issues within about 5 feet of my wireless router. Strangely enough, Zac discovered this to be an issue for LG’s UltraFine Display.  While LG has shared that new units will see the problem solved, this is a disconcerting issue for a $1,000 display. Existing owners will need to contact LG to arrange a fix.

Other notable aspects of my first week using ENVY 27 are the materials and build quality. The aesthetics of the display may be my favorite out of the current 4K USB-C options. However the solid materials of the base don’t extend to the rest of the unit. A lightly textured plastic is used for the back. 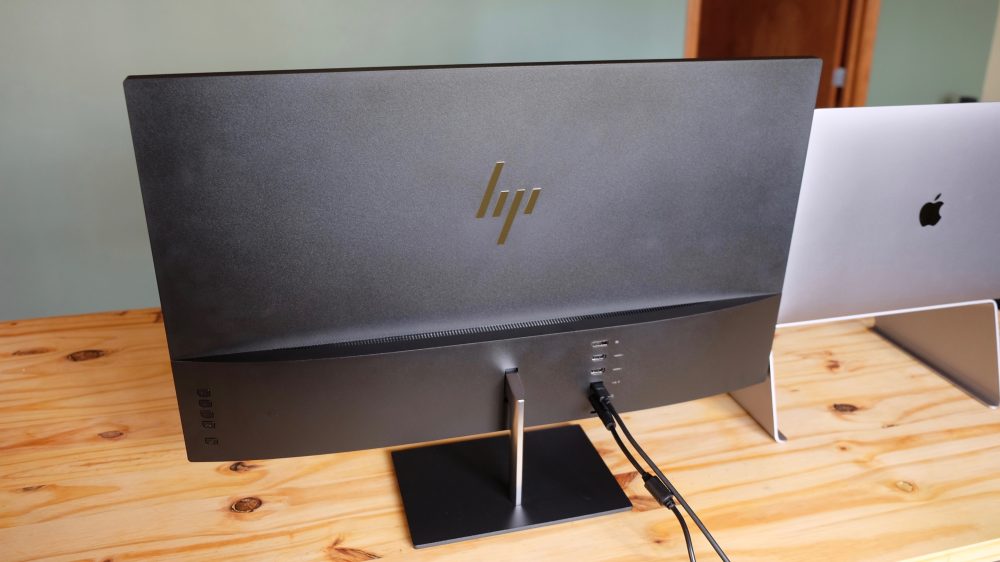 Even with plastic as the main material I was hoping for some aluminum accents, but even the bottom bezel of the display is textured plastic made to look like metal. It still provides a nice aesthetic, but is in contrast to the solid materials of the base. The ENVY logo is also slightly annoying, but I prefer it over the HP logo. 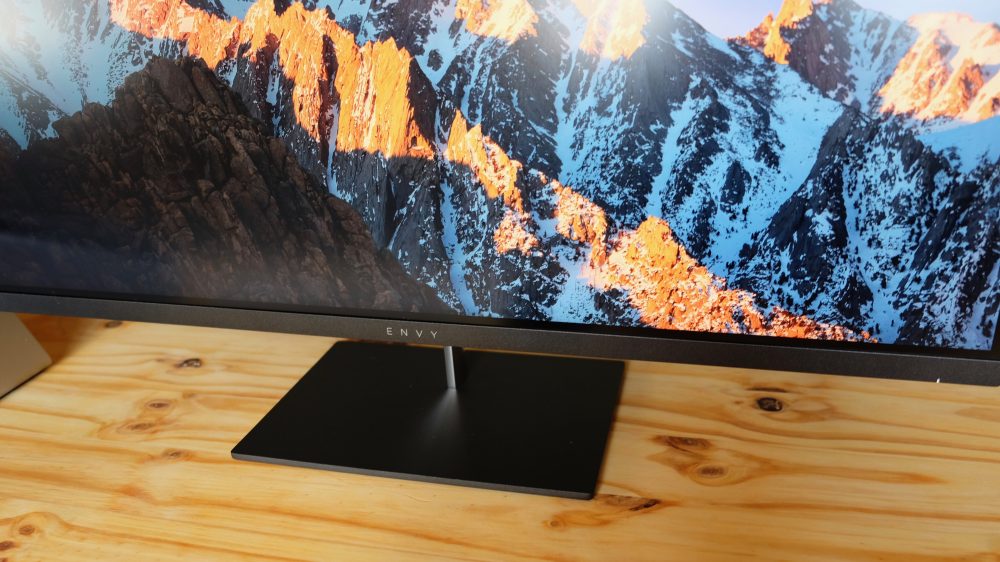 One last concern has to do with the stability of the display. From talking with my colleague Jeff, it sounds like HP’s ENVY 27 has a similar wobble to LG’s UltraFine as he mentioned in his full review. It’s not awful, but definitely distracting as I’ve been used to my super solid 30+ pound 2011 iMac. For now I’ve been snugging my MacBook Pro right up against the display to provide extra stability.

I’m not totally sure I’ll use this for my main display long-term, however I’m glad I’ve given it a shot. With a great price point, sharp design, 4K resolution, and USB-C connectivity I think it’s a good value at $500. If the trade offs aren’t deal breakers and it hits enough of your needs, you can pick up HP’s ENVY 27 directly or through Amazon (when in stock).