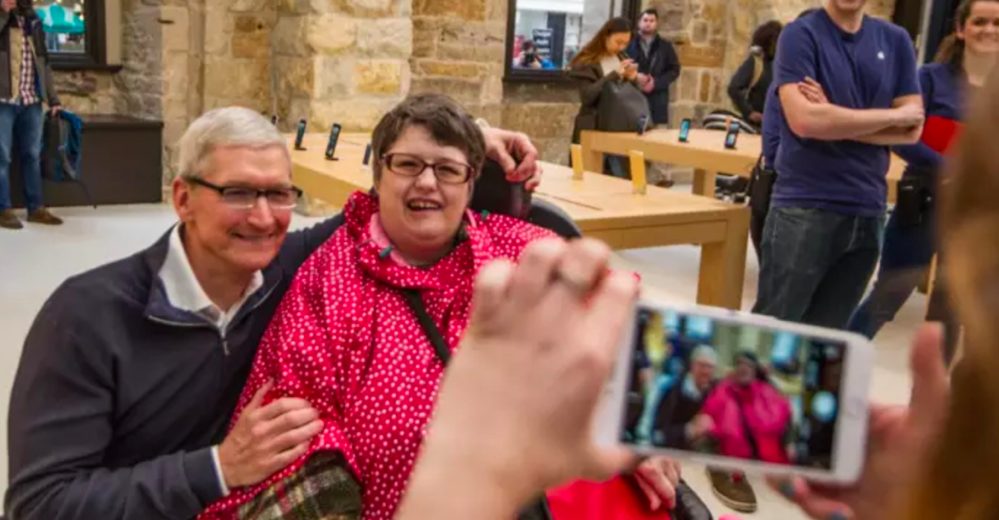 As he continues making the rounds in Europe. Tim Cook made an appearance at Apple’s retail location in Glasgow. While Cook has stopped in at multiple Apple Stores over the last week, this visit is especially notable because Cook got the opportunity to talk to Angela Reed, a cerebral palsy sufferer who relies on iPhone for its accessibility features…

Speaking to The Scotsman, Tim Cook noted that Apple puts an emphasis on the accessibility of its products so everyone can take advantage of technology. Cook also noted of meeting Reed and explained that it’s moments like that which really touch him:

“Our whole emphasis is on the accessibility of our products,” Cook told The Scotsman. “We design with people with disabilities in mind. We think everyone should be able to take advantage of technology. It shouldn’t just be for people that are lucky enough not to have disabilities.”

“I loved meeting Angela, and she shared a message with me on her iPhone. It really hit home with me.”

As she explained in an interview with Daily Mail, Reed uses features like Assistive Touch and Handoff to give herself an entirely new breadth of things she can do.

“This puts a dot on the screen and it enables me to reach features such as multi-tasking, gestures, volume, lock screen etc. – things that people who struggle with buttons will have difficulty with.”

While Assistive Touch has been available since iOS 5, Reed explained that she has only recently found this feature and it was by “accident,” nonetheless. Because of that, Reed thinks that Apple should make its accessibility features more prominent:

“I found this by accident, so how many more people don’t know such a valuable tool is there?”

Apple has been honored multiple times for its accessibility features in iOS. The American Foundation for the Blind has rewarded Apple for VoiceOver, while the company also recently won the Louis Braille award for its efforts, as well.

Apple’s VP of Environment, Policy, and Social Initiatives shared a link to the article on Reed, writing that Apple designs technology so anyone can do what they love:

This👇🏾Angela & @tim_cook, supporter of accessibility. Technology designed for everyone let's anyone do what they ❤ https://t.co/j2jcbLLGpP