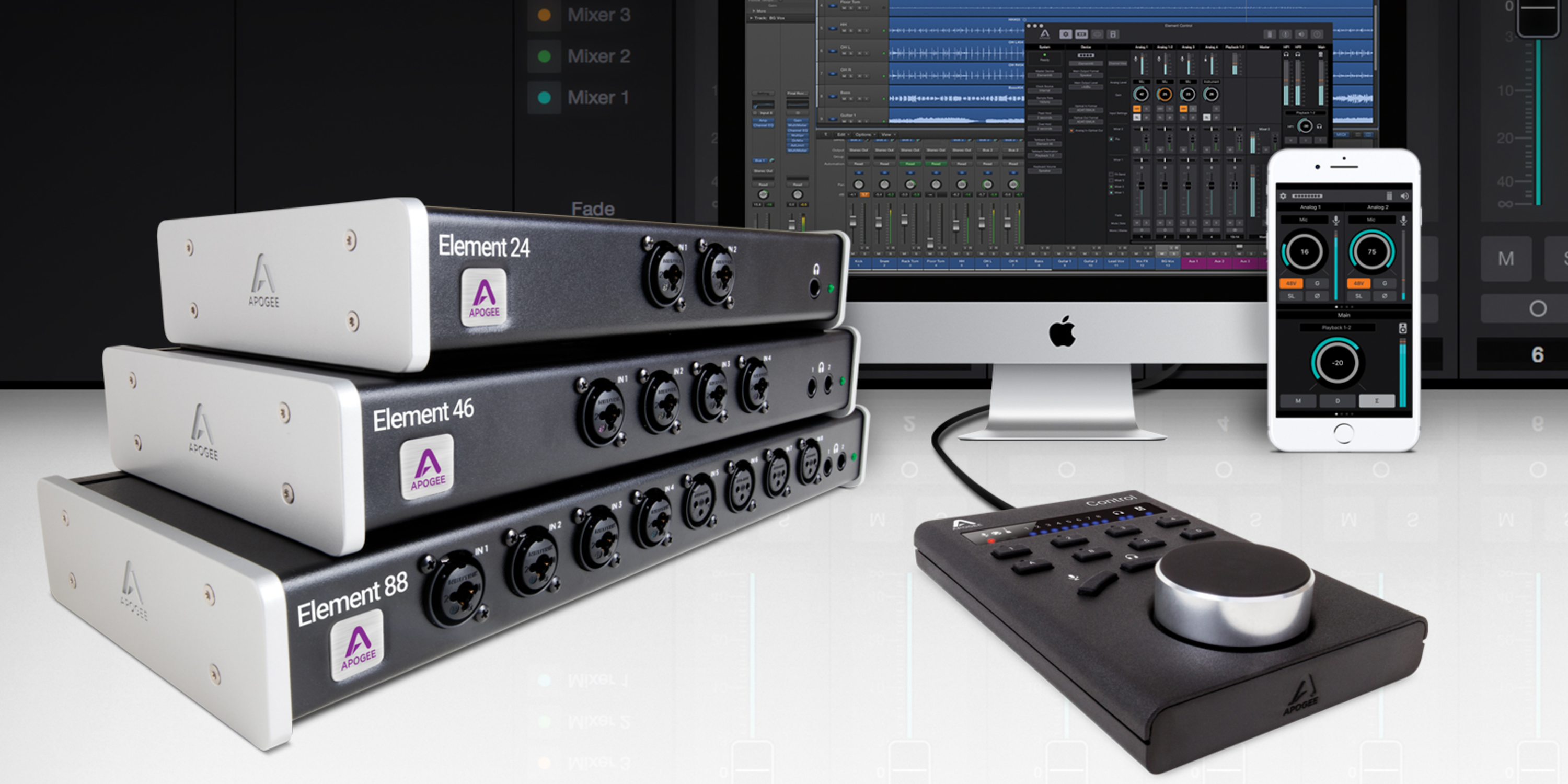 In this weeks episode of Logic Pros, we are taking a look at the new Apogee Element Thunderbolt audio interfaces. Apogee has sat atop the world of digital audio conversion for quite some time now. Its premium Thunderbolt Ensemble and flagship Symphony interfaces are among the top choices for industry professionals in terms of overall sound quality and unwavering support for Apple’s pro computers. The company has also dipped into the home/portable market with a series of fantastic boxes that bring Apogee’s professional mic-pres and D/A converter tech to a much more affordable price point with the One, Duet and Quartet.

These new Thunderbolt audio interfaces for Mac represent a sweet spot in Apogee’s lineup, using the best technology from the company’s higher end machines while stripping out some of the bells and whistles to bring the price down drastically. That means they’re now the best value in the lineup in terms of the number of ins and outs you get versus the company’s less expensive One and Duet products, and the more expensive Quartet, and Ensemble products. You sacrifice physical controls and a display for metering on the box, but Apogee makes up for it with slick Mac and iOS apps, integration with Logic, and a new separate remote accessory…

There are 3-models in the new lineup: Element 24, 46 and 88. They are all basically the same, just with more inputs/outputs and mic-pres (and of course higher-price points) on the higher-end models. You can even stack them together if you need to upgrade for more I/O at some point down the line. The two larger models support two separate headphone outputs, while the 24 just carries the one (you’ll find a comparison chart for all three right here). We’ve been giving the Element 88 a run for its money, along with the companion Mac/iOS apps and the add-on hardware remote Control. Head below for more on how this new function over form approach held up in action.

My very first impressions of the system were positive. I unboxed it and had it all set-up and working over Thunderbolt on my Mac Pro and Logic Pro X within minutes. The companion app known as Element Control installs on your Mac as part of the installation process and acts as the main control center for Element. Don’t be alarmed by the basic hardware design of the machine. No, there is nothing but physical jacks on the box itself, but you’ll get complete control over every element of the recording process via the software (and Logic Pro X). 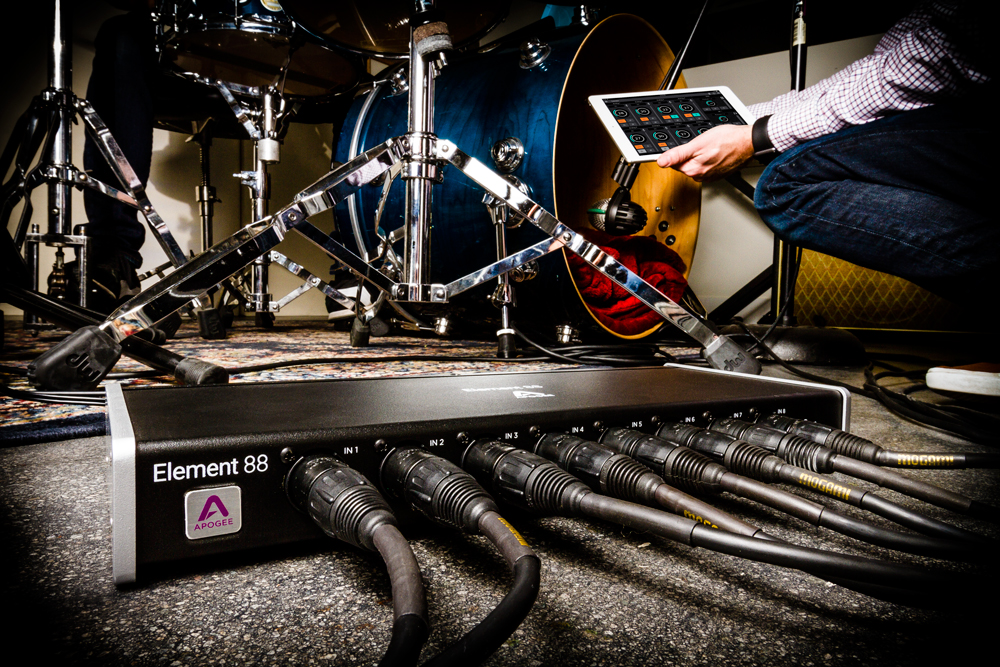 As for the actual hardware, it’s a simple and basic design with the top-notch build-quality we’ve come to expect from Apogee. Along with the solid metal case and end cheeks, all of the connectors feel quite rugged and durable. You will have to provide your own Thunderbolt cable and only the largest Element 88 model includes the optional rack mounting kit.

A quick note on the Thunderbolt connection/latency: One of the main benefits of using a Thunderbolt interface over USB is that it offers much lower latency performance. Element’s Thunderbolt connection has been great in my time with the box. Some of my heaviest projects are now able to run at a lower buffer setting, which makes navigating/editing/monitoring projects much easier, among other things.

As we mentioned above, all of the control you have over Element can be found in the Element Control apps:

The Mac app is essentially split in to two windows: Primary and Essentials. The thin Essential window can sit vertically or horizontally on your screen and I found it to be a great little way to visualize your inputs while allowing your DAW to hog most of the screen (as pictured below).

When you need a more detailed look at your input console, the Primary window houses just about everything you need, including full control over all of your inputs/mic pre-amps, headphone outputs, and even a nice little Talkback system for those of us running a more serious multi-tracking session, etc. We also get 4 separate (headphone) mixes that can be routed to any of the available physical outputs. 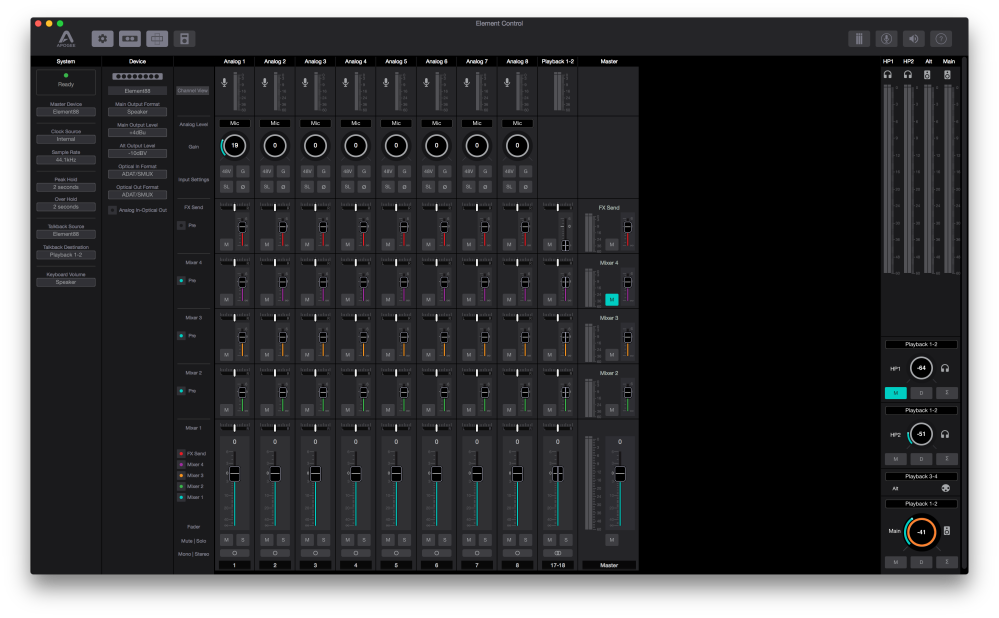 On the iOS side of things, you essentially get a mobile optimized version of the Essentials Window described above. Simply download the free app, and let it connect to the same Wi-Fi network the Mac your Element is connected to, and you’re ready to go. It worked immediately for me and was actually kind of a nice way to control the main room volume of my speakers and input levels for external synths/mics. Especially If I was tied behind a mic set-up or focused on a certain instrument not immediately in front of my monitor. 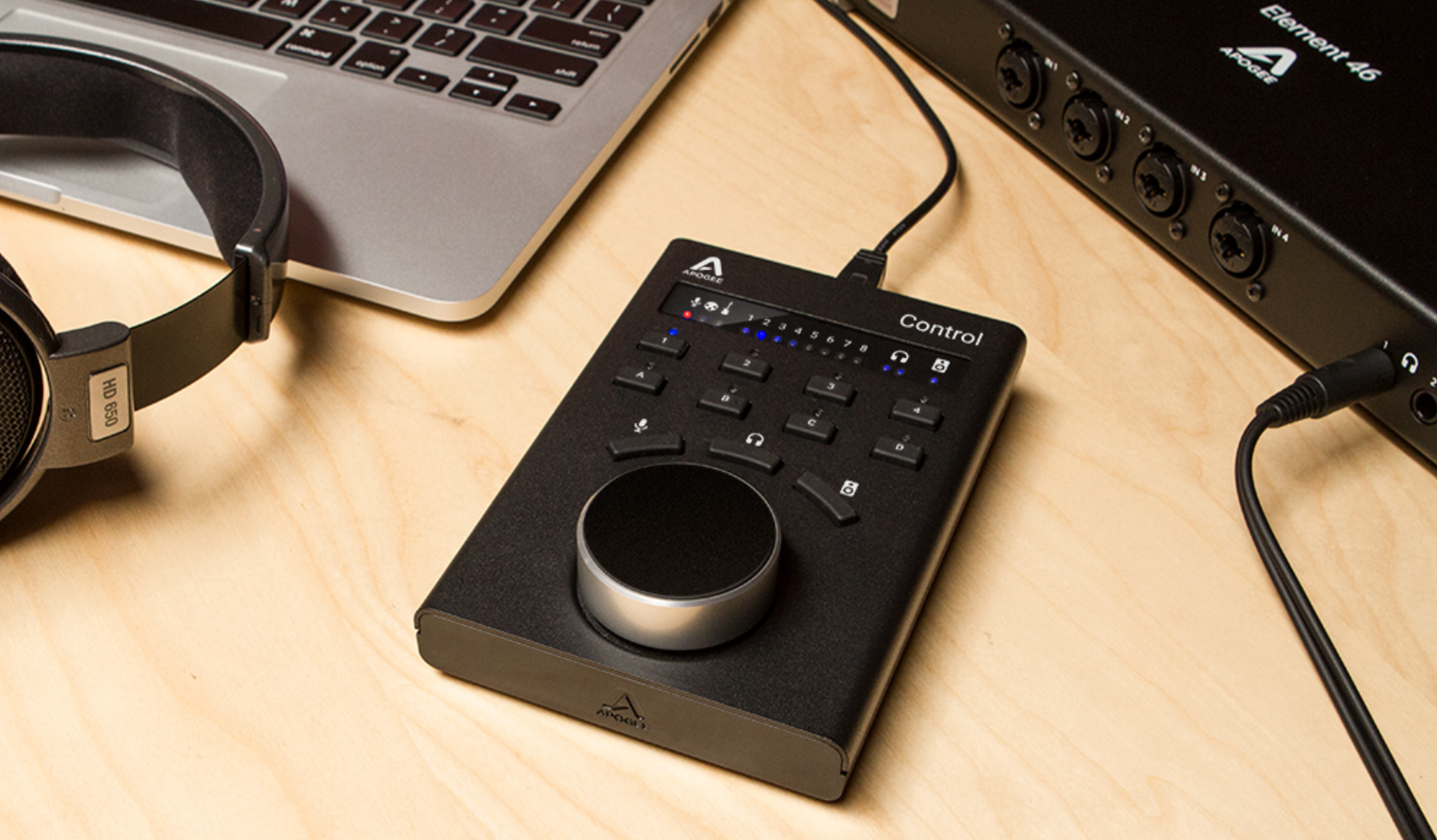 I also had a chance to go hands-on with the Apogee Control remote. The small desktop controller provides a giant data entry knob to control your Element device including everything from input gain and master output level control/mute to phantom power, polarity and soft limit toggles (among other things). In other words, physical controls and a display for the interface similar to those Apogee usually has builds into its other interfaces, like with One, Duet, Quartet, and Ensemble.

The buttons are nice and clicky and the knob and overall build quality feel as solid as the interface itself. It’s a nice option for those that require a physical control over their studio, and I for one think the $190 investment is worth it. Compare the price of the Element plus the Control remote to other products in Apogee’s lineup and you’re still looking at some of the best value for the number of ins and outs you’ll get. But with the solid desktop app and extremely convenient iOS counterpart, it is certainly not a required spend. 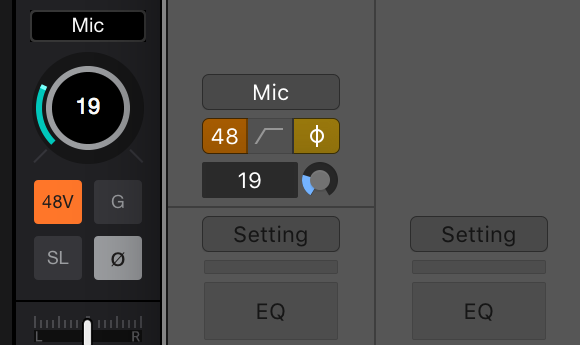 Does Element support Logic’s new Audio Device controls? Yes, perfectly. While you can use the Essentials window quite nicely alongside the Workspace in Logic, Apogee supports Logic’s “Audio Device controls” feature that lets you control your interface’s most important input controls right from the Mixer in Logic (as pictured above). Sick.

The Apogee Element Thunderbolt audio interfaces start at $595 for the 24, and go up from there at $895 for the 46 and $1,495 for the 88. So while these boxes certainly aren’t cheap, it is pretty amazing we are actually able to get a pair of Ensemble-level mic-pres/converters for just $600, nevermind 8 of them for $1,500 (+ loads of digital inputs). In fact, not only did my external analog synths and mics sound better on the way in, just about anything I played back through my speakers sounded better (than my current $400 USB interface) on the way out as well.

Anyone looking to get album quality inputs for external gear and mics, without spending a fortune on a flagship option from one of the big boys, should definitely take a good look at the new Element series. My only real issue with the box is the front loaded connectors, but that’s likely less of an annoyance for the majority and only a preference for some that are racking the interface.

However, if you don’t value the sound quality and the pedigree Apogee comes along with, there are cheaper Thunderbolt interfaces out there. If you’re just demoing or doing some casual podcasting/vlogging, Apogee’s Element series might make a little bit less dollars and sense than a single input, USB interface like the Apogee ONE or something even less expensive. 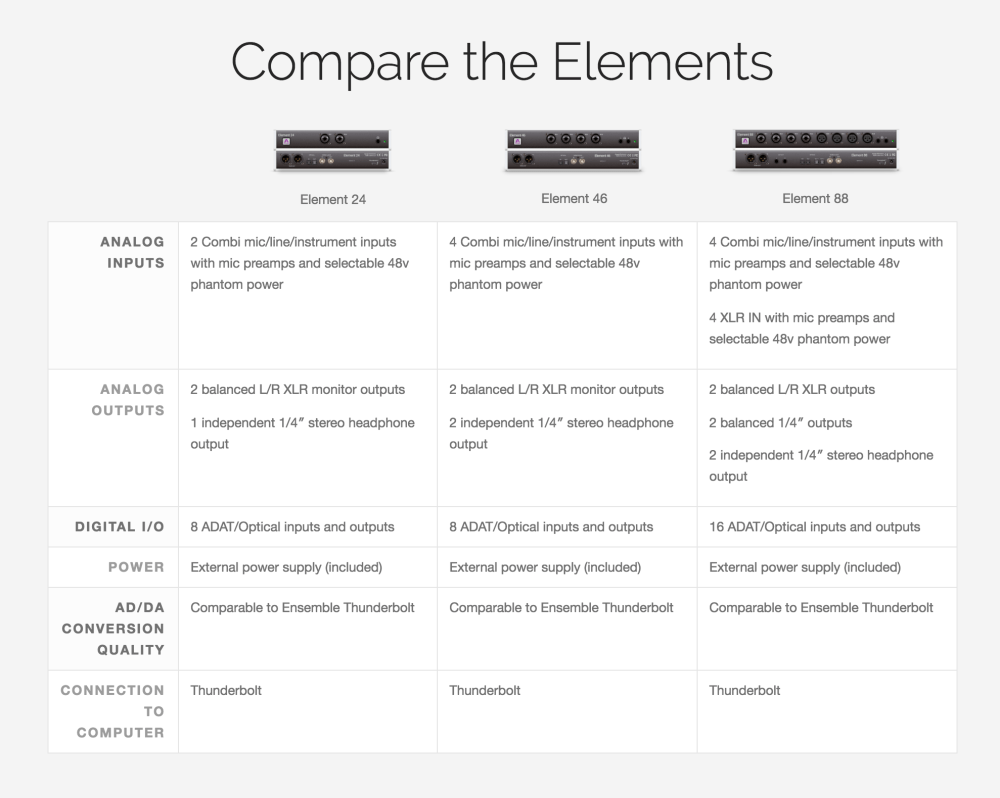