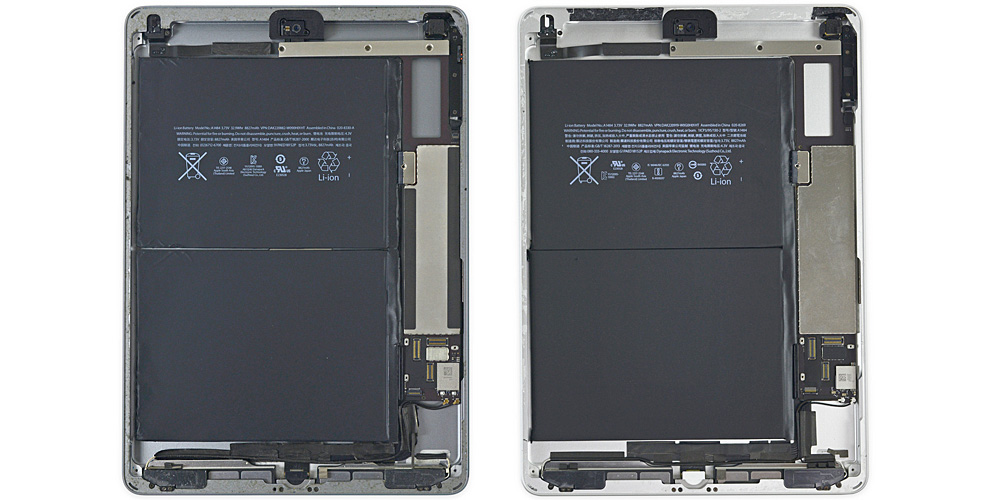 When Apple announced the new low-cost 9.7-inch iPad, both looks and spec seemed to suggest that it was essentially an original iPad Air with minor updates, and that’s exactly what iFixit found beneath the hood when it did its usual teardown.

So remember how we said this was similar to the first Air? We were serious—take a look inside the Air 1 and iPad 5 respectively. Not much has changed.

Externally, iFixit noted that three differences: the lack of a mechanical lock switch, smaller microphone holes and a single row of speaker holes.

Inside, the biggest difference was of course the addition of the Touch ID sensor and associated hardware.

Thumbs up for fingerprint reading. Thumbs down for a harder repair, since the sensor is uniquely paired to its logic board at the factory. At least this lovely button is still a button (unlike the solid-state un-button that debuted on 7-series iPhones).

And that screen brightness claim?

In Apple’s press release announcing the iPad 5, they told us it comes equipped with a “brighter 9.7-inch Retina display.” Our question is: brighter than what? It doesn’t look that different from the Air 1’s display. If they mean brighter than the Air 2, then that may simply be due to reverting to the unfused display design of the Air 1.

We’ve reached out to Apple for comment on this.

We noted that the new iPad is a little thicker and heavier than the iPad Air 2 – if this bothers you, you can pick up a discounted iPad Air 2 on Amazon for around $400.