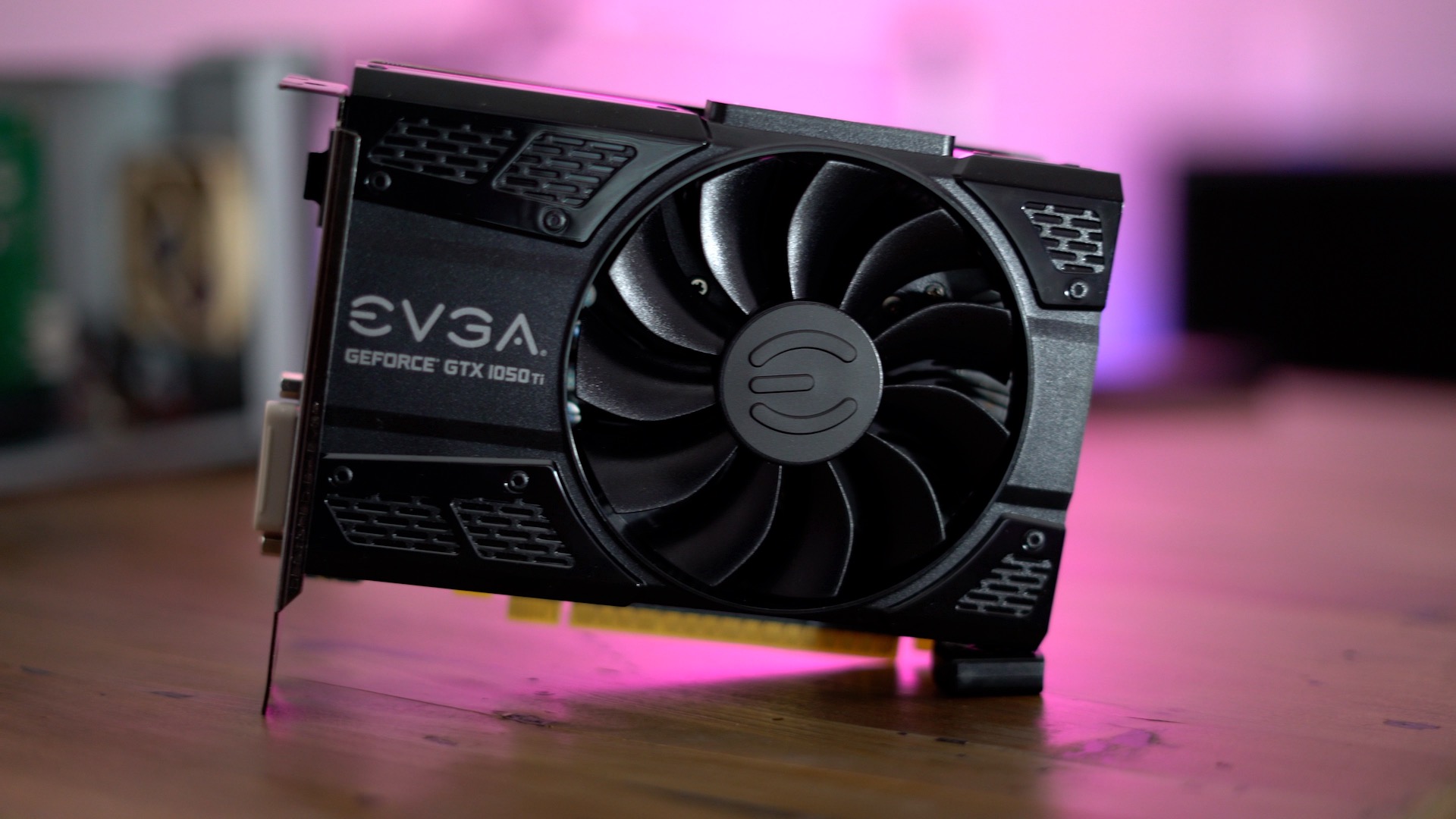 As we reported earlier this morning, Nvidia has released its long-awaited Pascal beta drivers for the Mac. These drivers make it possible to use graphics cards from the company’s popular 10-series lineup, which include the GeForce GTX 1080 Ti, among other hardware.

This release has major implications for legacy Mac Pro, Hackintosh, and eGPU users. It means that we can now use the latest Nvidia hardware to drive our machines graphically. It means taking a relatively underpowered computer like the 13-inch 2016 MacBook Pro, and running games at high settings with respectable frame rates.

We plan on testing out the beta drivers more extensively in the future, but for quick testing purposes, we decided to try powering our 13-inch MacBook Pro with the Pascal-based GTX 1050 Ti. What we found was an encouraging sneak peek at the potential of eGPU setups on the Mac.

I’m traveling right now, but I knew that Nvidia was planning on releasing its Pascal drivers this week. With this in mind, I brought the Akitio Thunder3 eGPU box that I put together for an earlier Boot Camp Windows 10 project. You can read about that project here; I used this box to run games on Windows since there was no Pascal compatibility on macOS at the time.

This enclosure is super small, relatively lightweight, and fairly powerful for what it is. It made the perfect travel companion to test out Nvidia’s beta Mac web drivers.

That said, I wouldn’t recommend the Akitio Thunder3 for most users, because its small size and lack of power heavily restrict the type of cards that can be used inside. You can, as brought up in this post, modify the case and power supply to drive larger cards, but you might as well buy a larger enclosure like the Akitio Node — another eGPU box that we’ve looked at in the past. 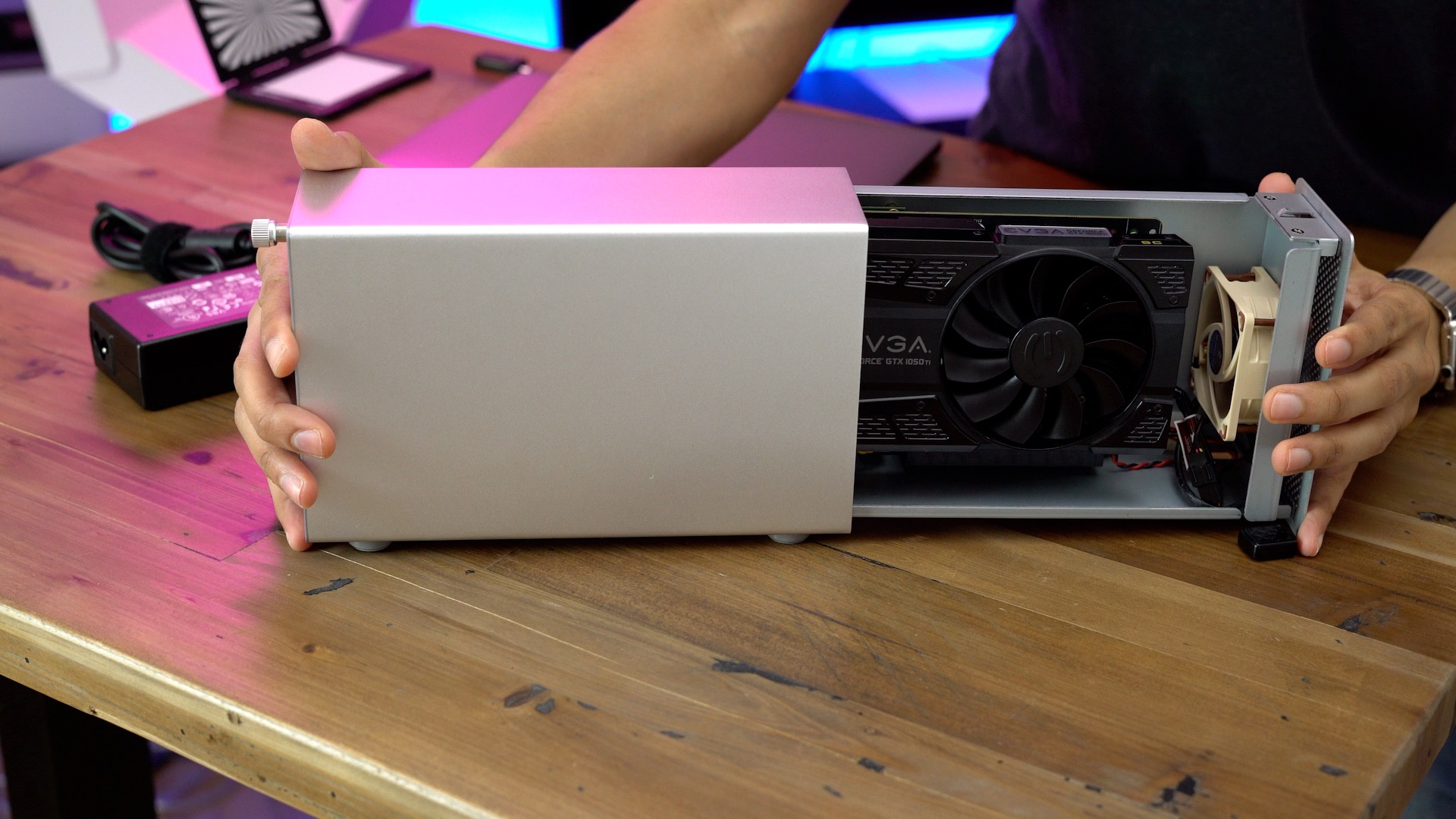 Another downside of the Thunder3 is that it doesn’t feature Mac compatibility out of the box. The Thunderbolt 3 chipset that’s used is unsupported on macOS, but it’s possible to use a hack to enable Thunderbolt 3 access for this chipset.

Once you have the Thunder3 setup and connected to your MacBook Pro and an external display, it’s just a matter of using goalque’s Automate eGPU script to download the newly-released web drivers and enable the GPU on your MacBook Pro. Note that you should be running macOS 10.12.4.

How to enable the Nvidia-powered eGPU on macOS 10.12.4

Open Terminal and type the following commands to download and run goalque’s script:

Follow the on-screen instructions, and you’ll eventually be asked to reboot your machine. Once you reboot, you should see macOS on the externally connected display, along with Nvidia’s Driver Manager running in the menu bar.

You’ll also notice that the Nvidia card shows up inside System Information under the Graphics/Displays section. 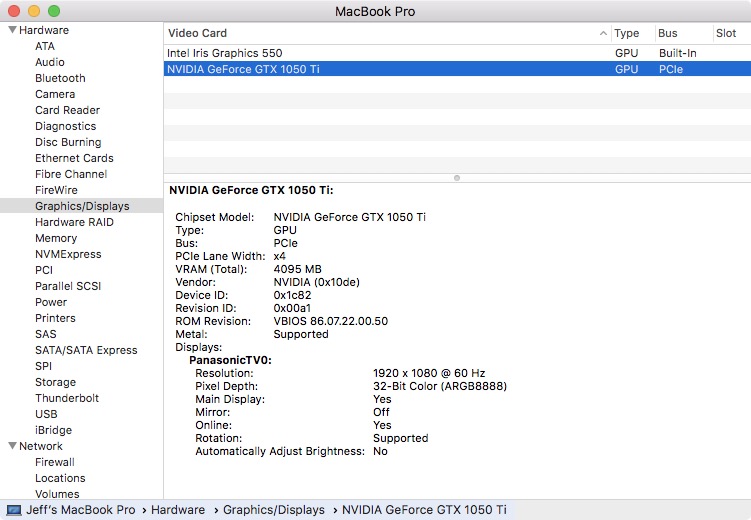 I ran a few quick before and after benchmarks using Heaven and found that even a GTX 1050 Ti made a world of difference on my 2016 MacBook Pro with integrated Intel GPU. 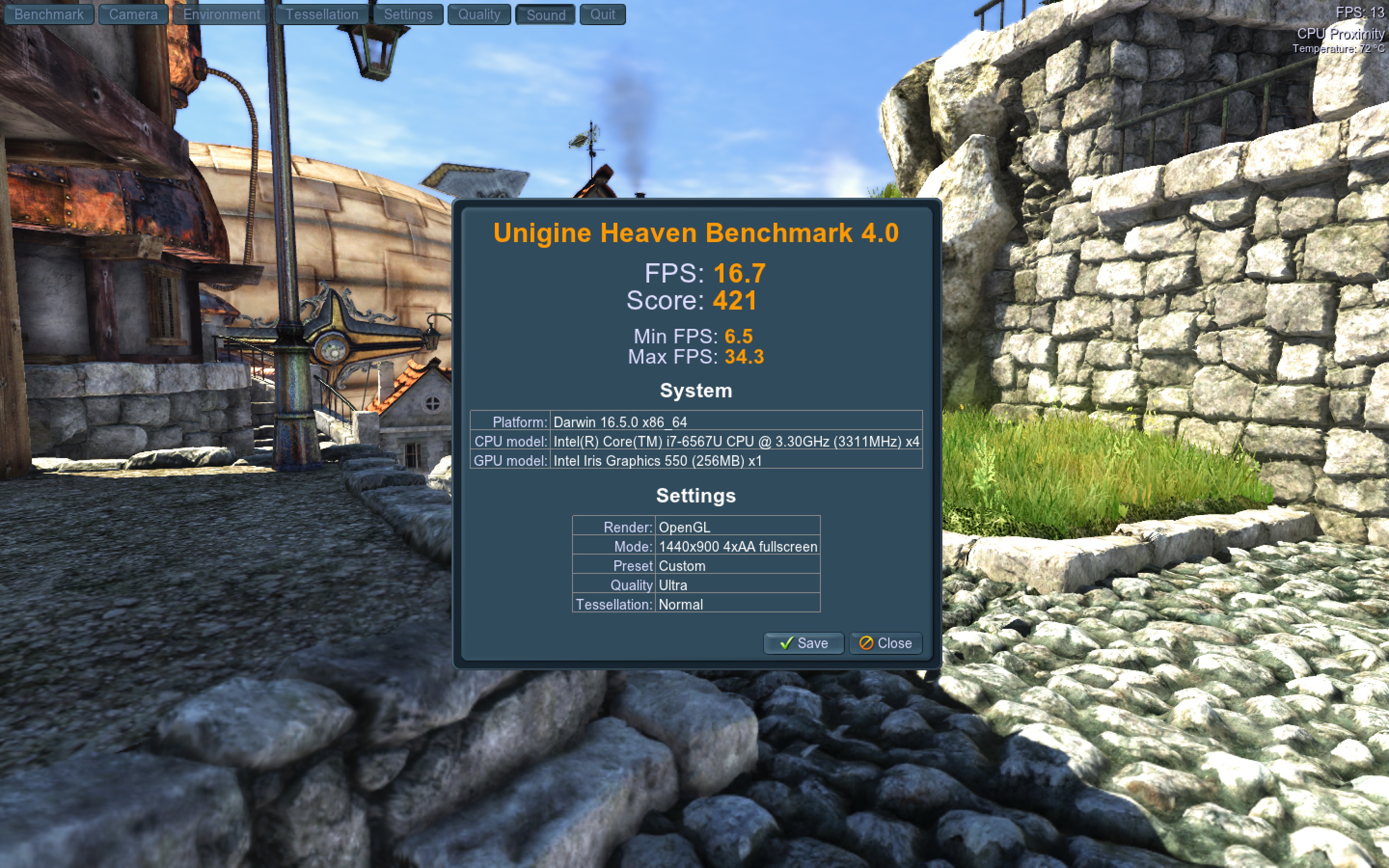 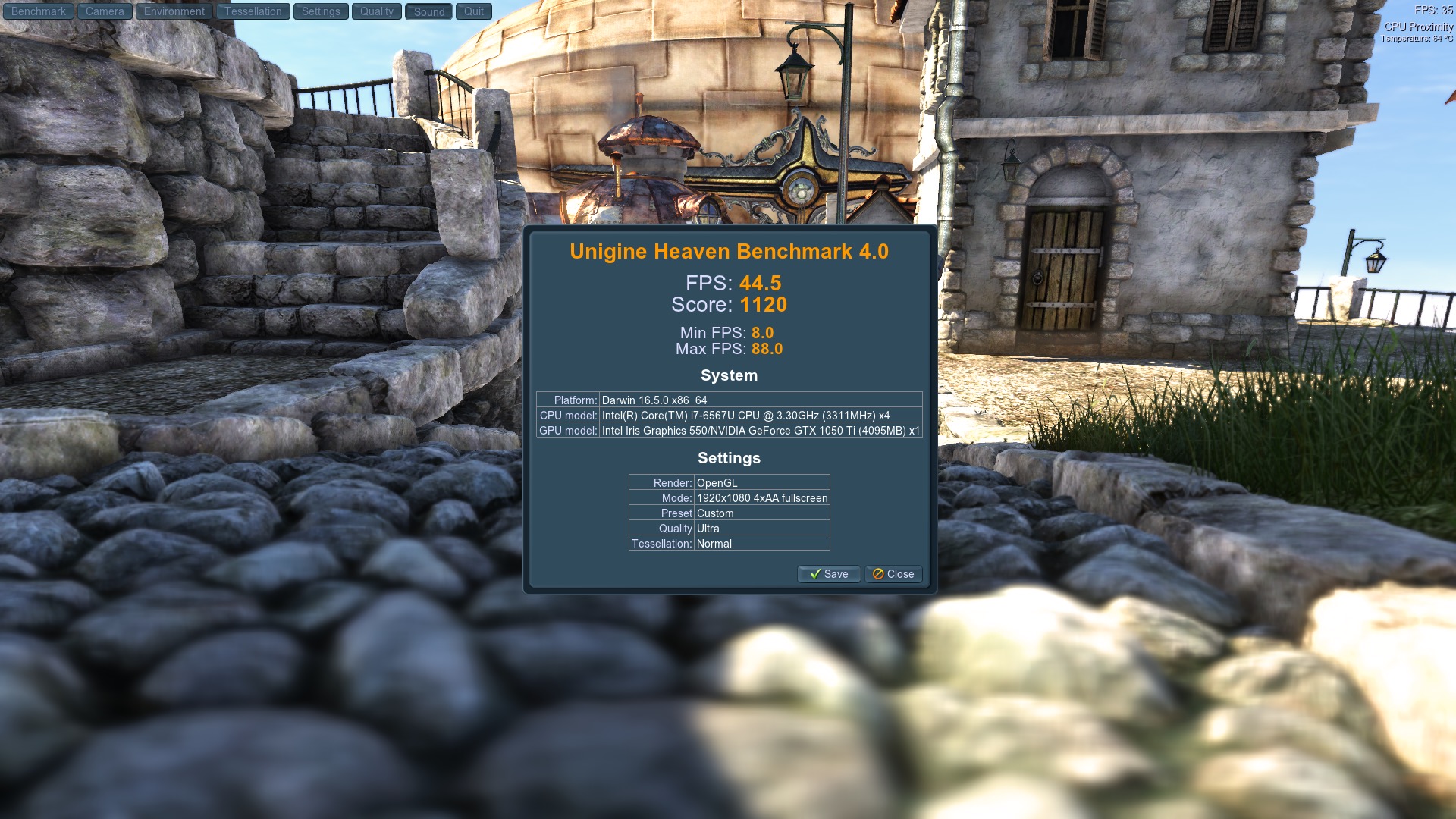 Notice the stark difference in FPS. Using the Intel Iris Graphics 550 integrated GPU, a game with high settings is basically unplayable, whereas the eGPU setup produces respectable frame rates even with the relatively “weak” GTX 1050 Ti.

Obviously this is not an extensive test, but it just goes to show at a glance the type of potential offered by an eGPU setup via Thunderbolt 3. That’s just one of the reasons why the release of Nvidia’s new Pascal drivers is so exciting for MacBook Pro owners in particular.

Keep in mind that Nvidia offers a wide range of Pascal-driven GPUs. Prices range from around $99 for the 1050 all the way up to $1200 for the ridiculously powerful Titan Xp. Most of these GPUs are available from a variety of manufacturers like EVGA, GigaByte, Zotac, and others.

As mentioned, the uber-small Thunder3 box is not ideal for most setups. Not only is it too small to fit most cards, but it isn’t able to supply enough power to most cards. The GTX 1050 and 1050 Ti that I used are anomalies because their power requirements are low (75W TDP) and they’re small enough to fit inside the enclosure.

I personally like the Akitio Node, because it features a generous 400W power supply, and has more than enough room to fit large double-width GPUs. The Node also has the advantage of having the newer TI chipset that works out of the box on macOS without any hacks. Unfortunately the Node is backordered at B&H, and has limited availability at Amazon.

We’re still very early in the game, but now that Nvidia has stepped up to the plate and provided macOS drivers for its Pascal lineup, the future looks much brighter for eGPUs. There are still some obvious growing pains, such as the lack of an easy way to drive the MacBook Pro’s internal display with the eGPU, but I think that as more people show interest, the parties involved will be more willing to support our efforts. We’ll be back with additional coverage in the coming days and weeks. In the meantime, feel free to share your current and planned setups in the comment section.