Hands-on: iOS-compatible LaMetric Time clock is like a status board for your desk [Video] 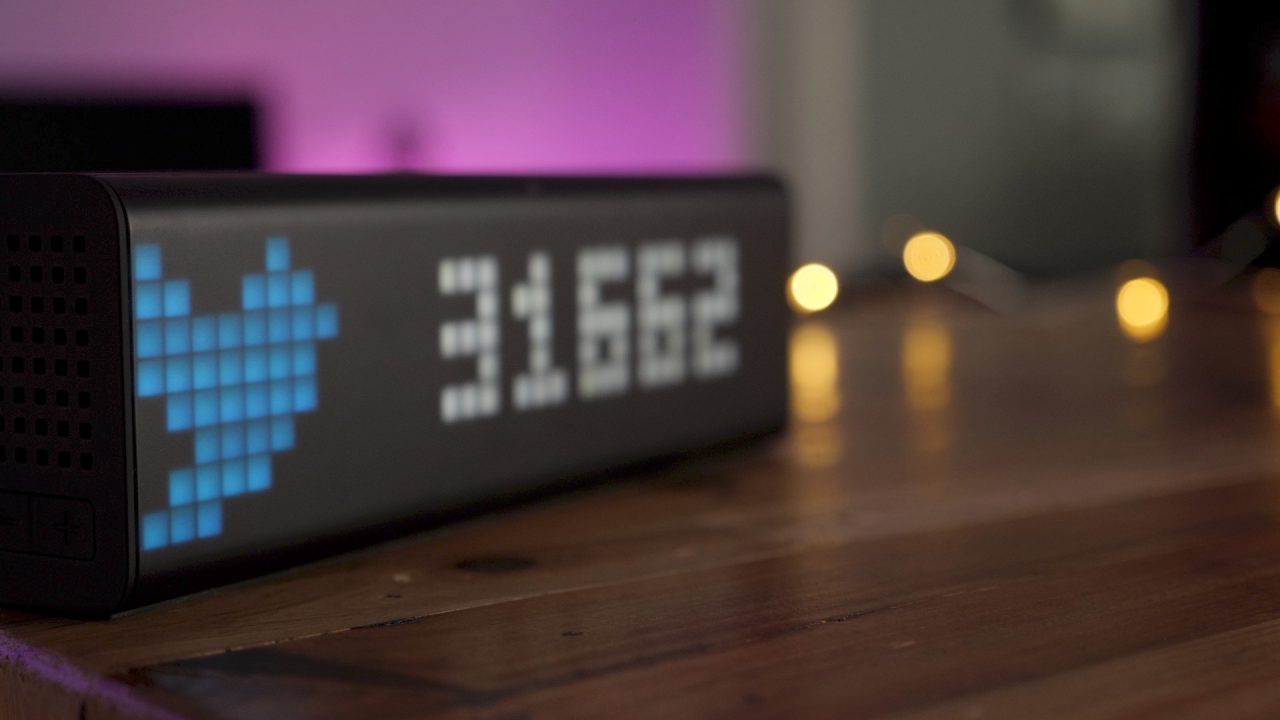 The LaMetric Time is a highly-customizable Wi-Fi-enabled clock that can be configured via its free iOS companion app. The app allows you to customize the clock face, and load apps for displaying personalized information — things like Twitter followers and realtime YouTube subscriber numbers, for example.

Although the LaMetric Time includes a clock, it’s more of a smart dashboard that can be fed information from a seemingly endless amount of Internet-connected sources. The device, which includes Bluetooth-enabled stereo speakers, makes for a good desktop companion that keeps you up to date with details on everything from Instagram followers to stock updates. Have a look at our hands-on video walkthrough for more details.

What’s inside the box?

The $179 LaMetric Time looks like a typical Bluetooth Speaker at first glance, but once you start using it, the differences are immediately obvious. For one, the front panel serves as a display that houses a block of 8×8 color LEDs and a separate 29×8 block of white LEDs.

The LEDs feature a layer of diffusion, which makes them appear less like typical round LED bulbs, and more like square 2D light sources. It’s a neat effect that lends the LaMetric Time its own unique look. It also helps provide the device with good viewing angles — it’s easy to see the display even at extremely wide angles. 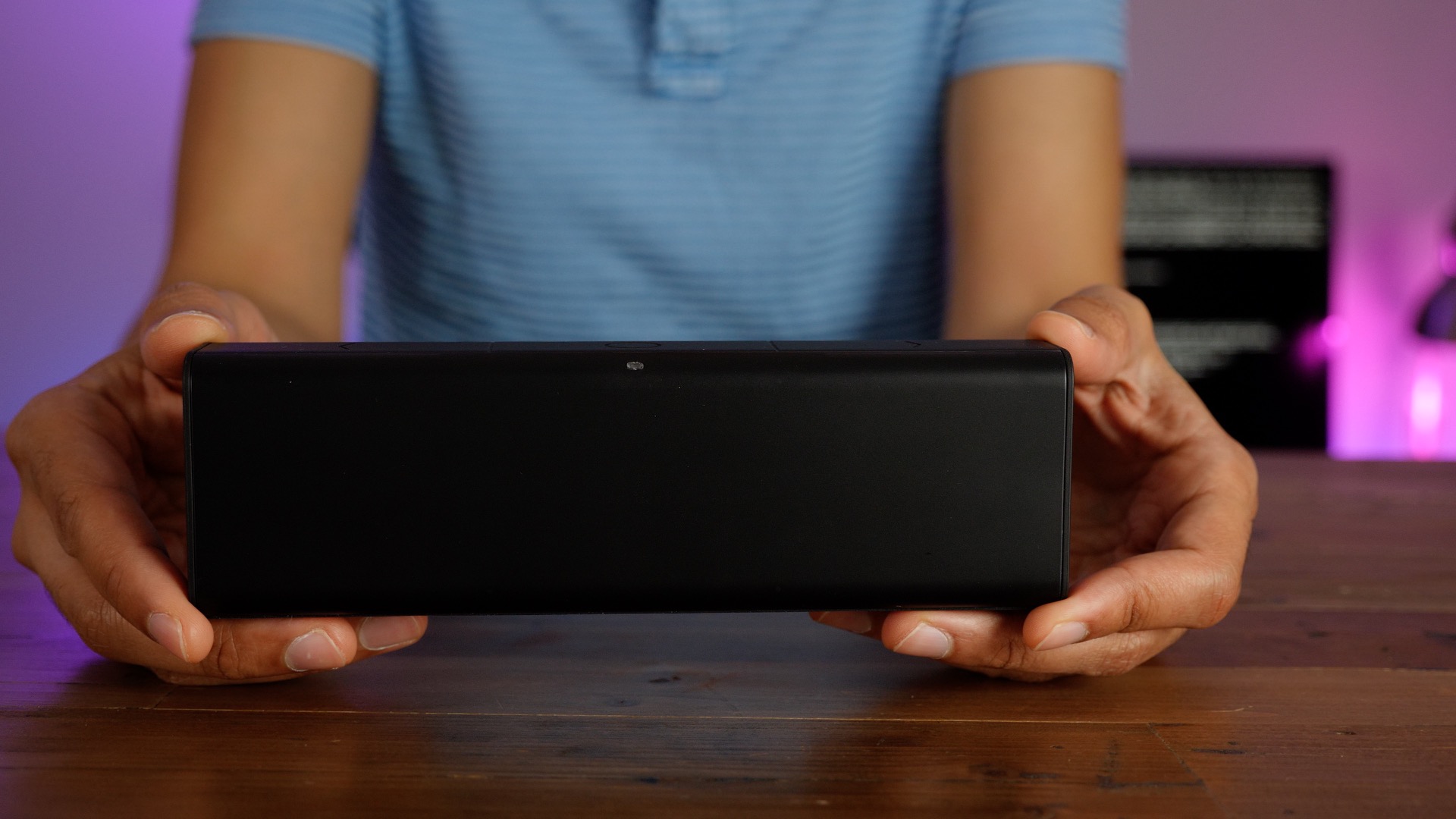 A pair of stereo speakers are located on each end of the device. The sound quality isn’t as good as what you’ll find on most standalone Bluetooth speakers, but this isn’t surprising. Keep in mind that the speakers aren’t just for music playback via Bluetooth; the device is capable of emitting various notification sounds based on the apps you have installed. 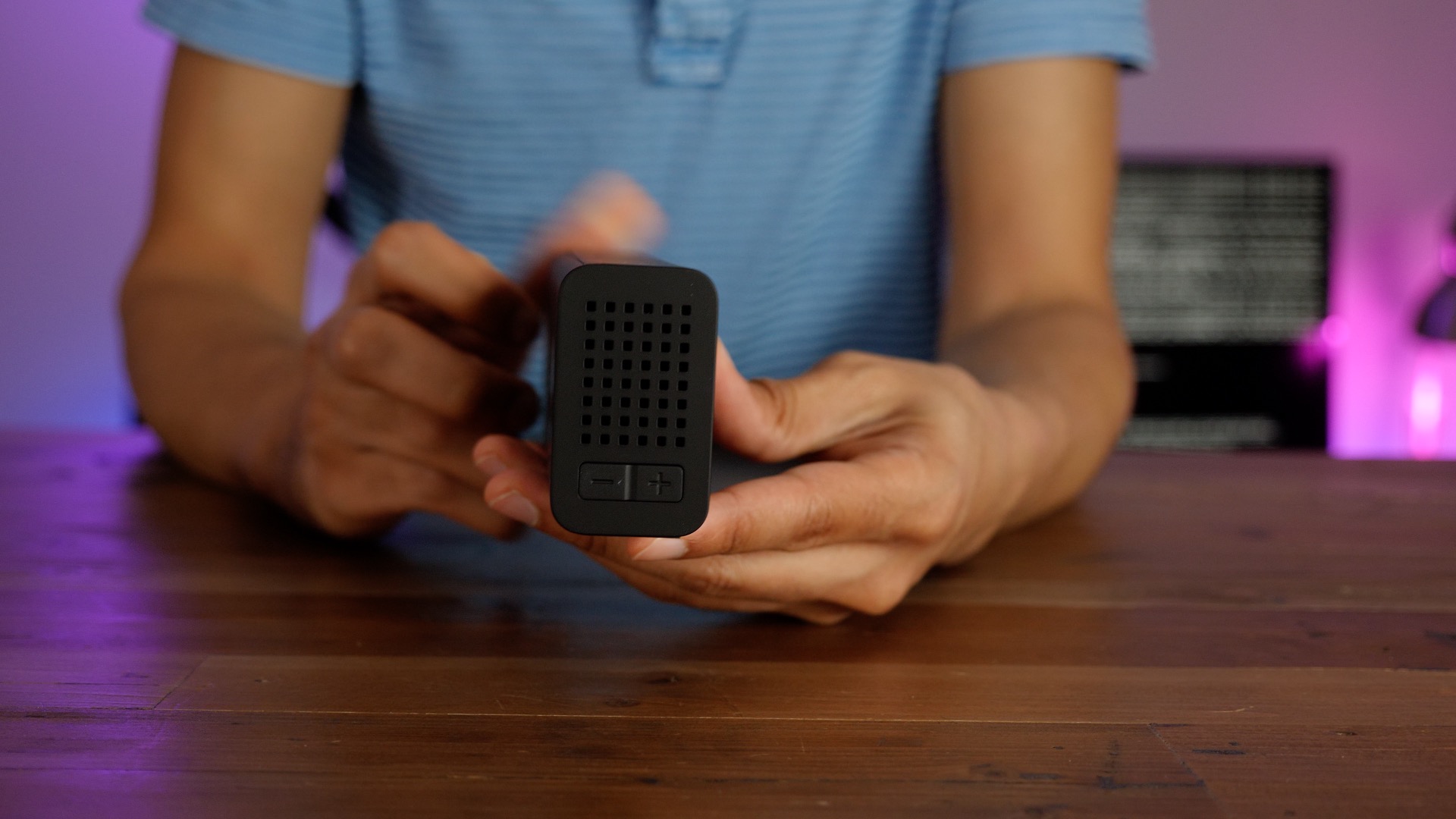 Below the left and right speakers are buttons for adjusting the speaker volume and powering the device on and off. Finally, the rear of the LaMetric Time features ports for the micro USB power cable, and a headphone output.

The overall build quality of the LaMetric Time is just okay, it’s definitely not built to withstand moisture, drops or rough handling, like some dedicated speakers are. There’s a soft touch material applied to majority of the body, with tacky rubber material on bottom to keep it from scooting around on your desk.

Setting up the LaMetric Time is a simple exercise that involves powering it up, downloading the app to your iPhone, and using the app to register and connect the device to your Wi-Fi network. Oddly enough, LaMetric’s app has not been updated for larger iPhones, which is a bit disappointing to see in 2017. 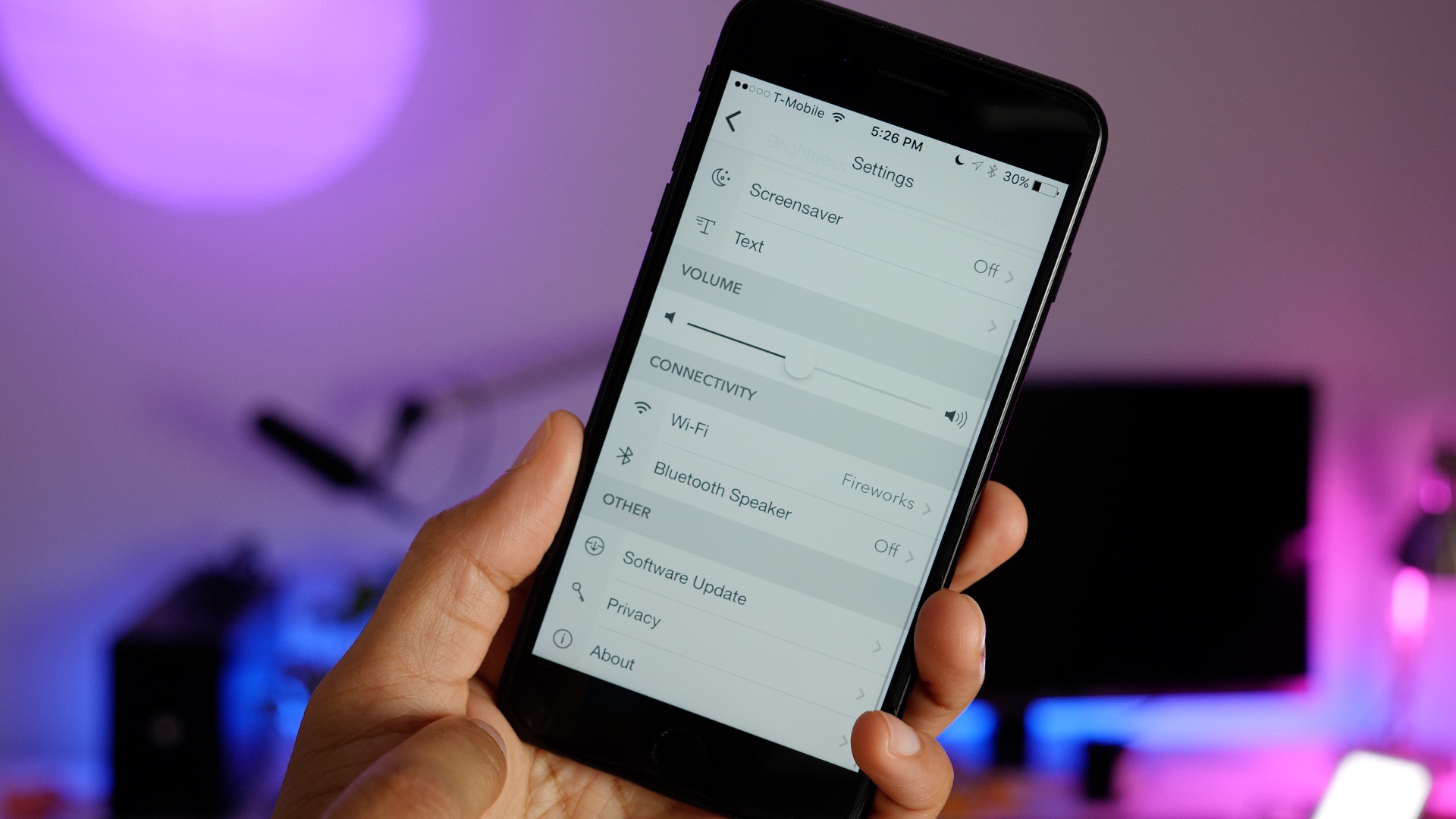 That said, setup is extremely straightforward and the app walks you through the entire process step by step. Once the device is configured, you can customize basic options like display brightness, screensaver, text size and animation, etc.

The real fun starts when you begin downloading some of the many apps available via the LaMetric Time app. You’ll find custom apps for weather, alarms, message boards, email, Twitter, YouTube, etc. 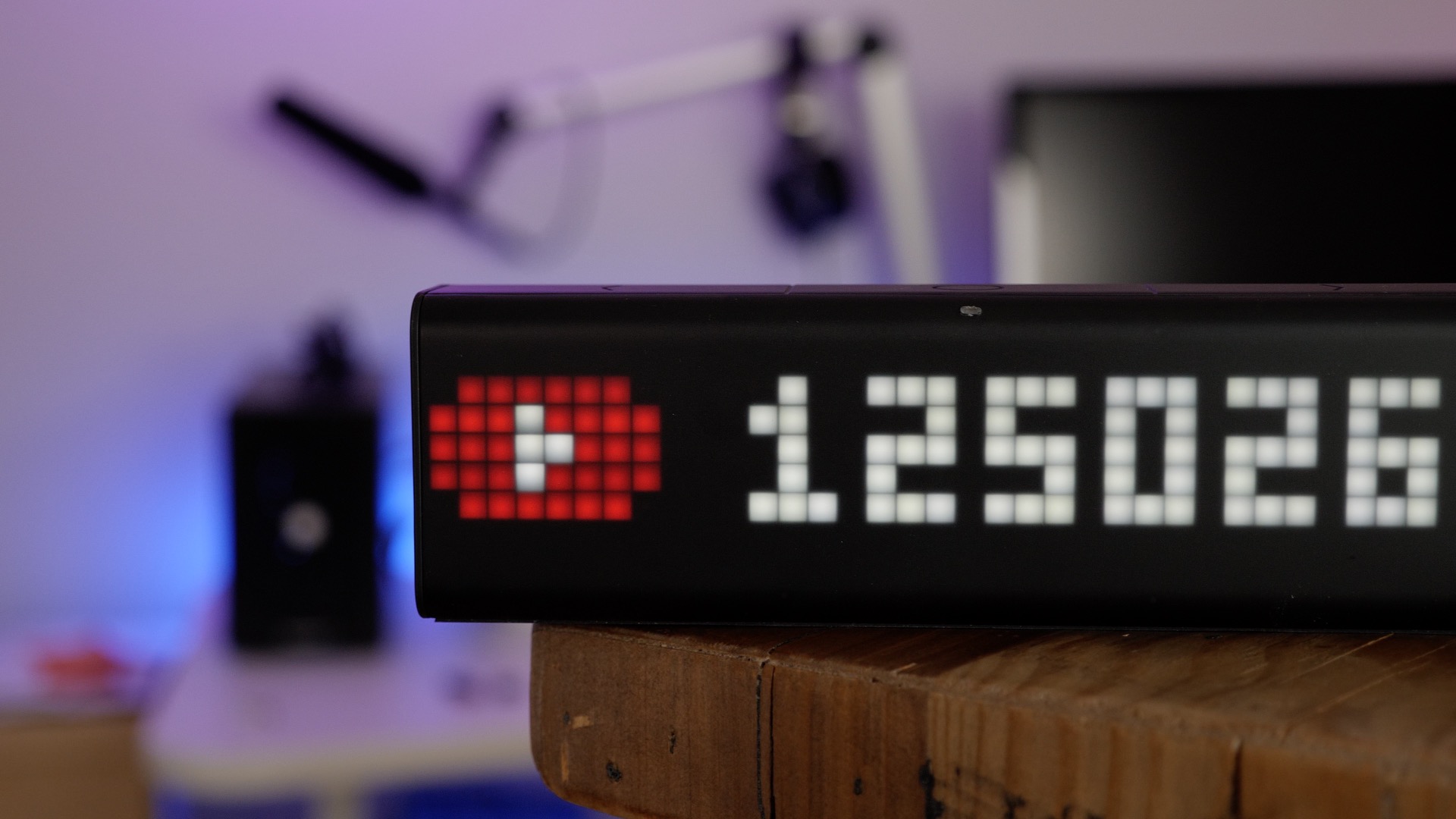 The app center includes apps created by LaMetric and third-party developers. Anyone can register to be a LaMetric developer to create their own apps for the device. 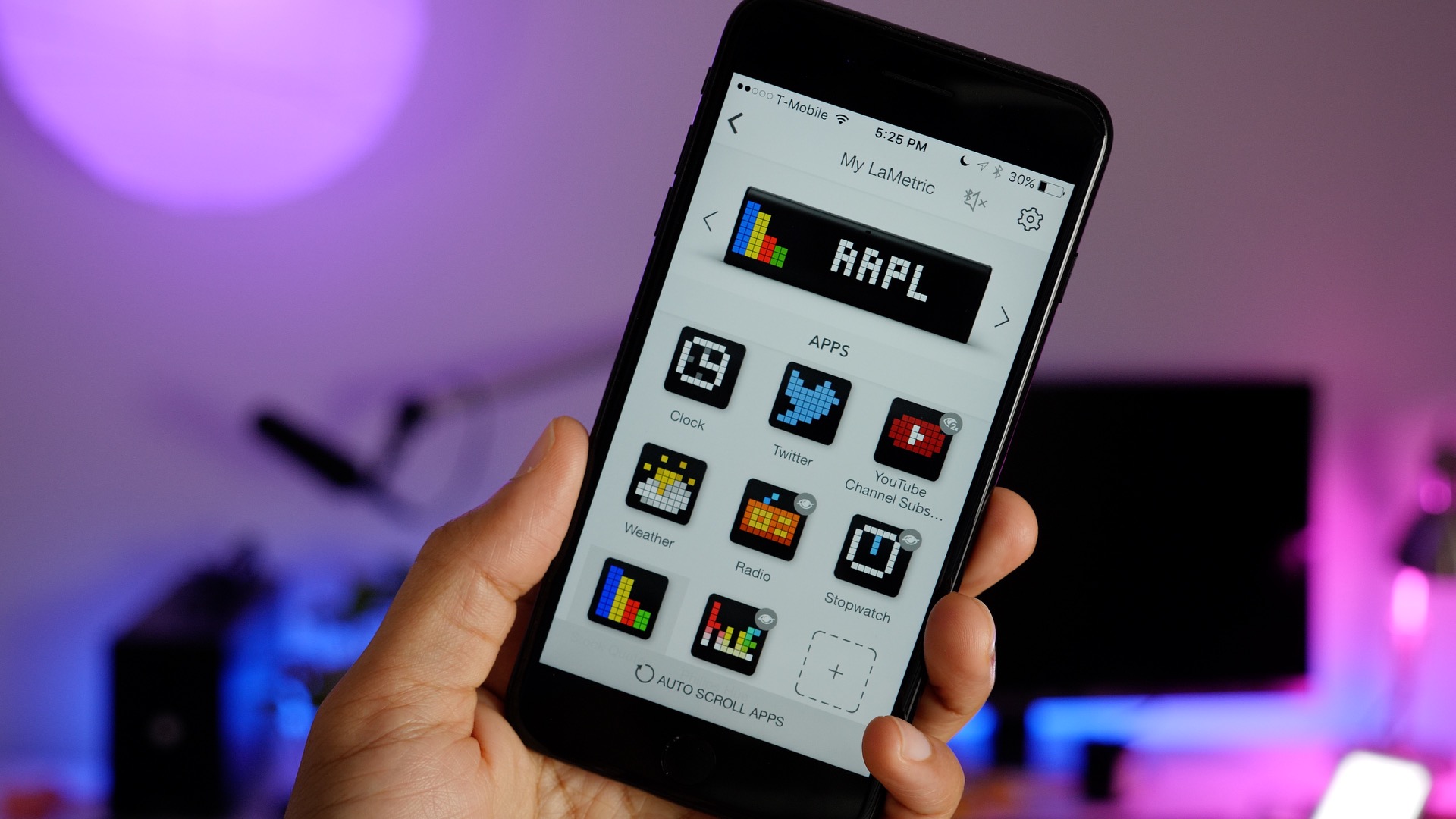 After downloading the desired apps, you can reorder them inside the LaMetric Time app. You can also configure how the apps are displayed — you can have the display auto scroll from app to app, use the Previous and Next buttons to scroll between apps, or keep a single app locked in at all times. 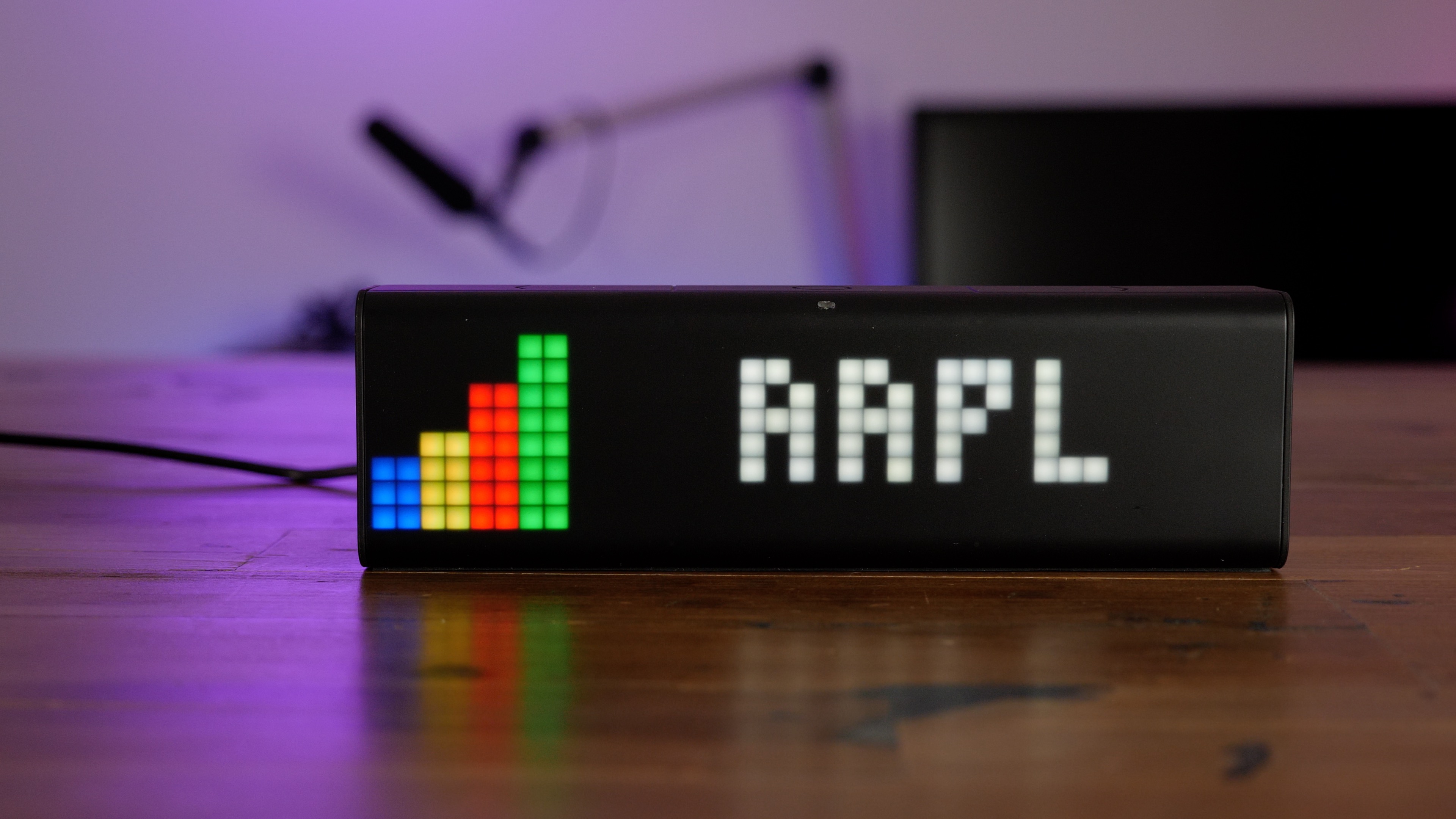 While the official LaMetric Time app can only be used to interact with the device while on the same Wi-Fi network, the recently-released LaMetric Smile app can be used anywhere. By logging in to your LaMetric account, you can send stickers to your device even while on a different network. 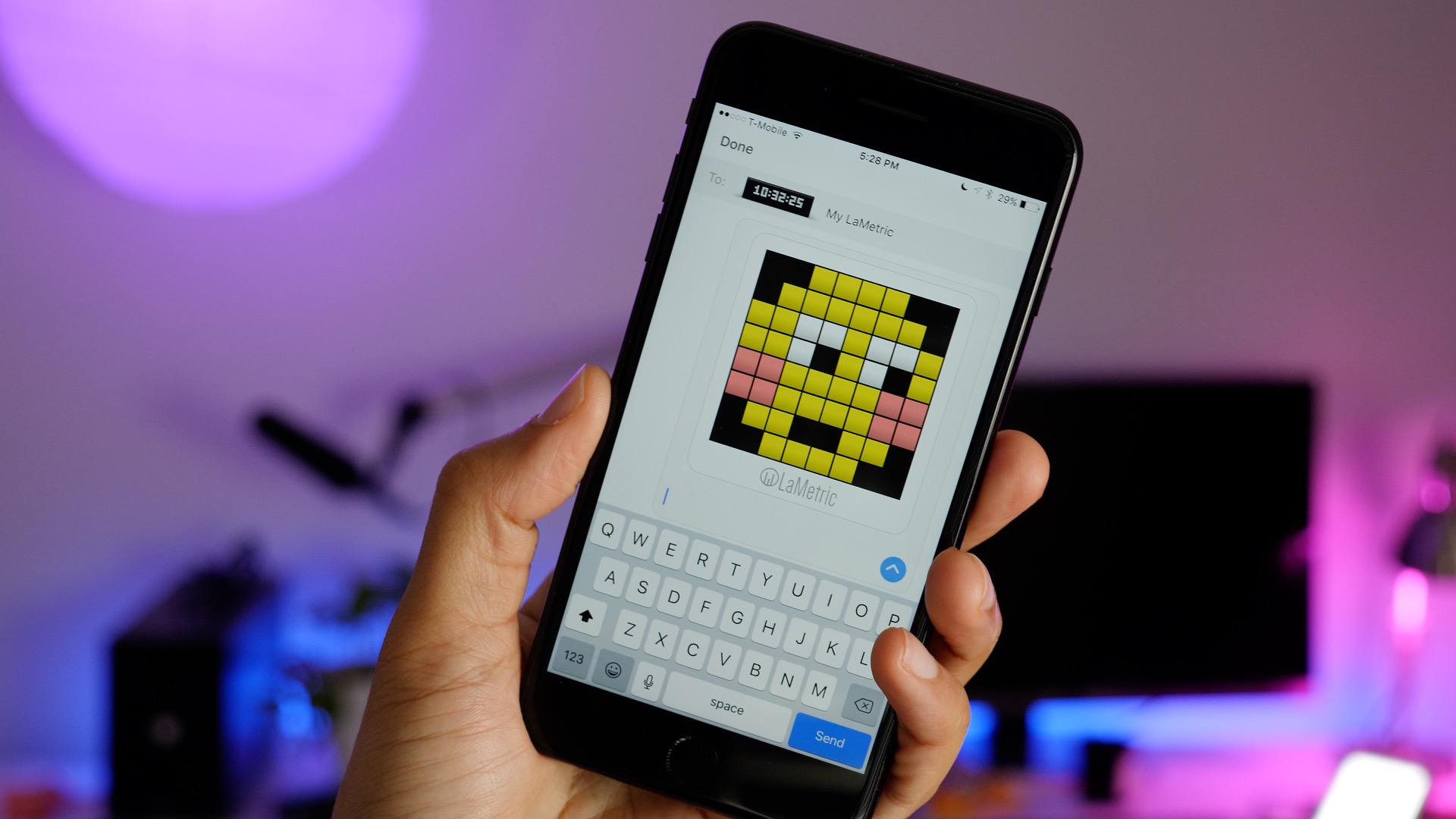 LaMetric Smile allows you to choose from a large list of pre-defined static and animated stickers, but users also have the opportunity to create their own content. Stickers appear in the 8×8 color area on the left side of the LaMetric Time, and any accompanying text is included to the right of the sticker in the larger 29×8 section. If you have the LaMetric Time placed in a visible area of the home, the stickers could prove to be a hit with family members.

Depending on how you plan on using it, the LaMetric Time could be a novelty device, or it could prove to be useful in a business environment as a sort of modern take on the status board. LaMetric also features support for Alexa, SmartThings, and IFTTT, which adds significantly more depth to the platform.

As someone who closely follows social metrics and YouTube subscriber numbers, the LaMetric Time is a handy device that provides me with glanceable status updates in a passive manner that doesn’t feel intrusive. It won’t be for everyone, but if that’s the sort of thing that sounds good to you, perhaps you should consider giving the LaMetric Time a shot.