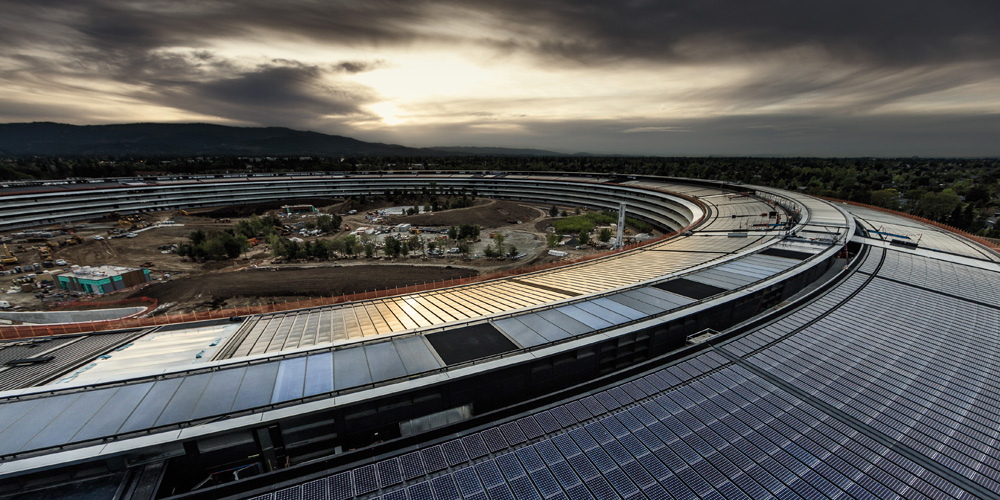 Wired has been given an exclusive look inside the spaceship ring of the Apple Campus, revealing the ‘pod’ approach that was the brainchild of Steve Jobs.

As with any Apple product, its shape would be determined by its function. This would be a workplace where people were open to each other and open to nature, and the key to that would be modular sections, known as pods, for work or collaboration. Jobs’ idea was to repeat those pods over and over: pod for office work, pod for teamwork, pod for socializing, like a piano roll playing a Philip Glass composition. They would be distributed demo­cratically. Not even the CEO would get a suite or a similar incongruity. And while the company has long been notorious for internal secrecy, compartmentalizing its projects on a need-to-know basis, Jobs seemed to be proposing a more porous structure where ideas would be more freely shared across common spaces. Not totally open, of course—Ive’s design studio, for instance, would be shrouded by translucent glass—but more open than Infinite Loop.

The site has posted a small selection of teaser photos (below), and promises that video is coming soon …

The Wired piece is a long-form article that delves into the background to the design in significant detail. For example, the way that a clover leaf design morphed into the circle.

To accommodate the pods, the main building took the shape of a bloated clover leaf—people at Apple called it the propeller—with three lobes doing a Möbius around a center core. But over time Jobs realized that it wouldn’t work. “We have a crisis,” he told the architects early in the spring of 2010. “I think it is too tight on the inside and too wide on the outside.” This launched weeks of overtime among Foster’s 100-person team to figure out how to resolve the problem. (Their ranks would eventually reach 250.) In May, as he was sketching in his book, Foster wrote down a statement: “On the way to a circle.”

According to Walter Isaacson’s biography of Jobs, there was another factor. When Jobs showed a drawing of the clover leaf to his son, Reed, the teenager commented that from the air, the building would look like male genitalia. The next day Jobs repeated the observation to the architects, warning them that from that point on, “you’re never going to be able to erase that vision from your mind.” (Foster and Behling say they have no recollection of this.)

By June 2010 it was a circle. No one takes full credit for the shape; all seem to feel it was inevitable all along. “Steve dug it right away,” Foster says.

Steve Levy describes seeing the Ring for the first time in the steel and glass.

Inside the 755-foot tunnel, the white tiles along the wall gleam like a recently installed high-end bathroom; it’s what the Lincoln Tunnel must have looked like the day it opened, before the first smudge of soot sullied its walls. And as we emerge into the light, the Ring comes into view. As the Jeep orbits it, the sun glistens off the building’s curved glass surface. The “canopies”—white fins that protrude from the glass at every floor—give it an exotic, retro-­future feel, evoking illustrations from science fiction pulp magazines of the 1950s. Along the inner border of the Ring, there is a walkway where one can stroll the three-quarter-mile perimeter of the building unimpeded. It’s a statement of openness, of free movement, that one might not have associated with Apple. And that’s part of the point.

Before Jony Ive takes him through the full-height doors to the cafe. Each door is 85 feet by 54 feet and weights 360,000 pounds.

“This might be a stupid question,” I say. “But why do you need a four-story glass door?”

Ive raises an eyebrow. “Well,” he says. “It depends how you define need, doesn’t it?”

As you’d expect, huge amounts of thoughts has gone into the smallest of details, much of it driven personally by Steve Jobs, says Stefan Behling, one of Foster+Partner’s project leads.

They describe the level of attention devoted to every detail, the willingness to search the earth for the right materials, and the obstacles overcome to achieve perfection […]

At one point, Behling recalls, Jobs discussed the walls he had in mind for the offices: “He knew exactly what timber he wanted, but not just ‘I like oak’ or ‘I like maple.’ He knew it had to be quarter-­cut. It had to be cut in the winter, ideally in January, to have the least amount of sap and sugar content. We were all sitting there, architects with gray hair, going, ‘Holy shit!’”

Foster+Partners had to persuade Steve of the need for the fins that we’re now used to seeing as an integral part of the design.

Though they’re now the building’s signature flourish, they were not something Jobs originally wanted, even though he eventually came around to them. “In Steve’s perfect world, there wouldn’t have been any canopies,” Behling says. “Yes, we can produce an all-glass building, but in this climate we have to shade it—you have to have some serious baseball-cap action.”

While the cost of the project has been criticized by some shareholders, CEO Tim Cook is unapologetic.

“Could we have cut a corner here or there?” Cook asks rhetorically. “It wouldn’t have been Apple. And it wouldn’t have sent the message to everybody working here every day that detail matters, that care matters.” That was what Jobs wanted—what he always wanted. And the current leaders of Apple are determined not to disappoint him in what is arguably his biggest, and is certainly his last, product launch. “I revere him,” Cook says. “And this was clearly his vision, his concept. Our biggest project ever.”

The photos show the building fins; a tree being positioned; Cook in one of the completed pods; an early sketch of a pod; light fixtures that can direct light up, down or both; an empty pod; concave and convex buttons beneath a desk to adjust the height; and door handles with no visible fixings.

The full-length piece is well worth a read.

What are your thoughts on the pod concept and design details seen? As ever, please share your views in the comments. 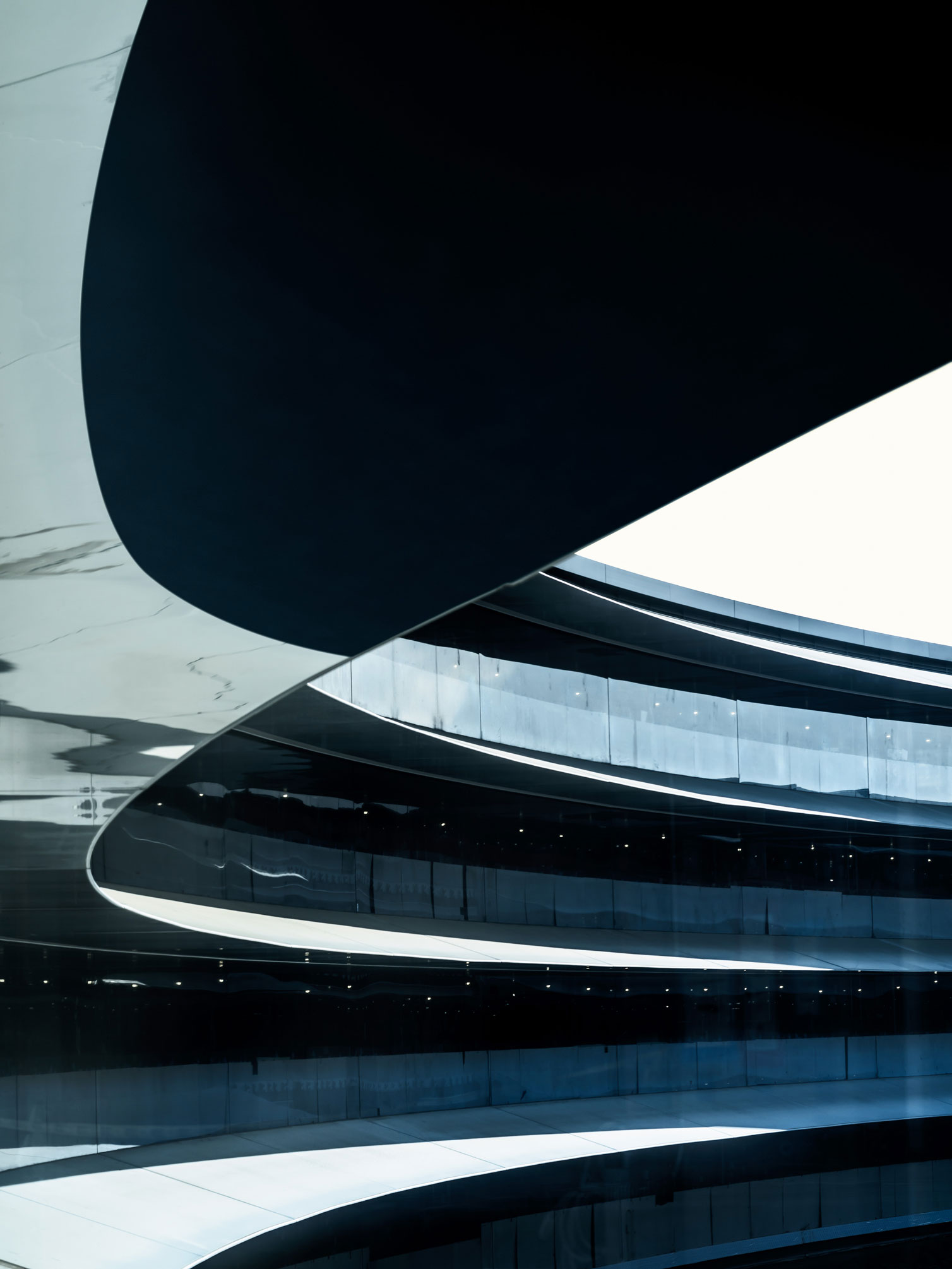 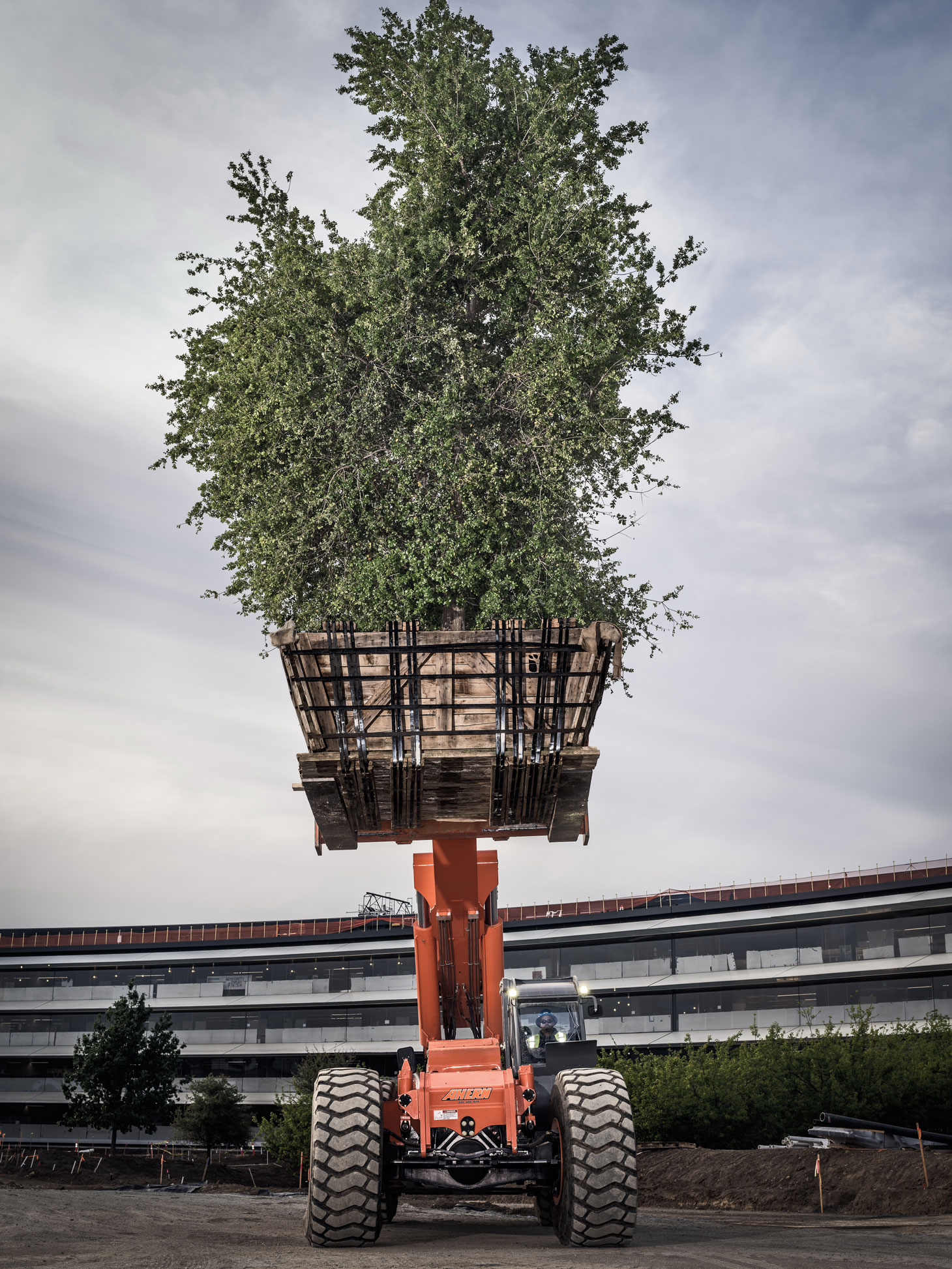 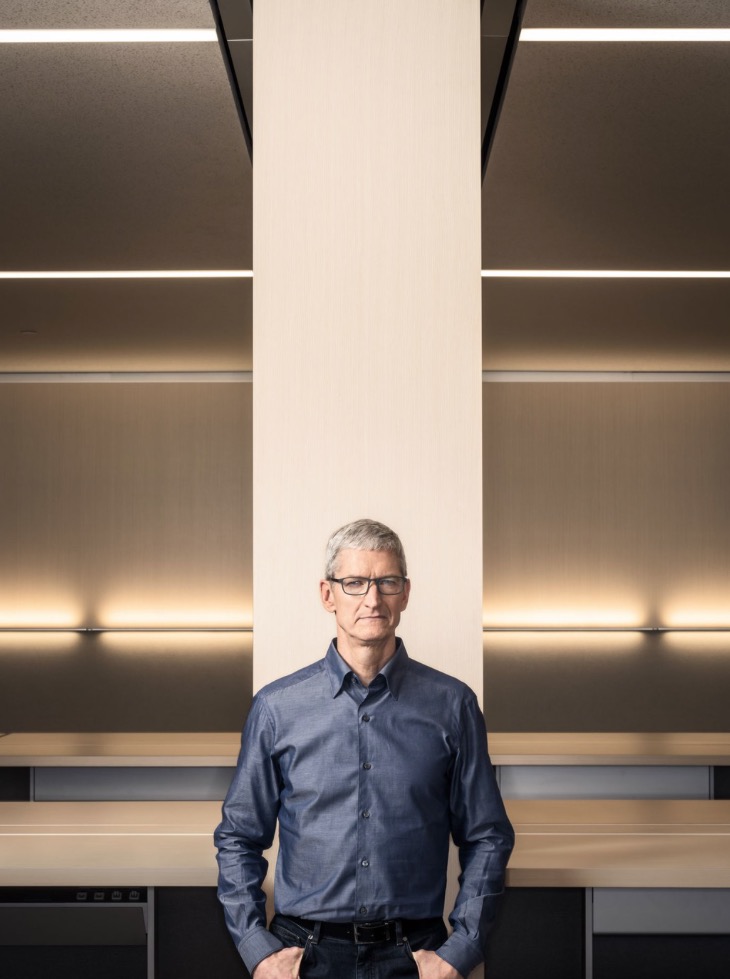 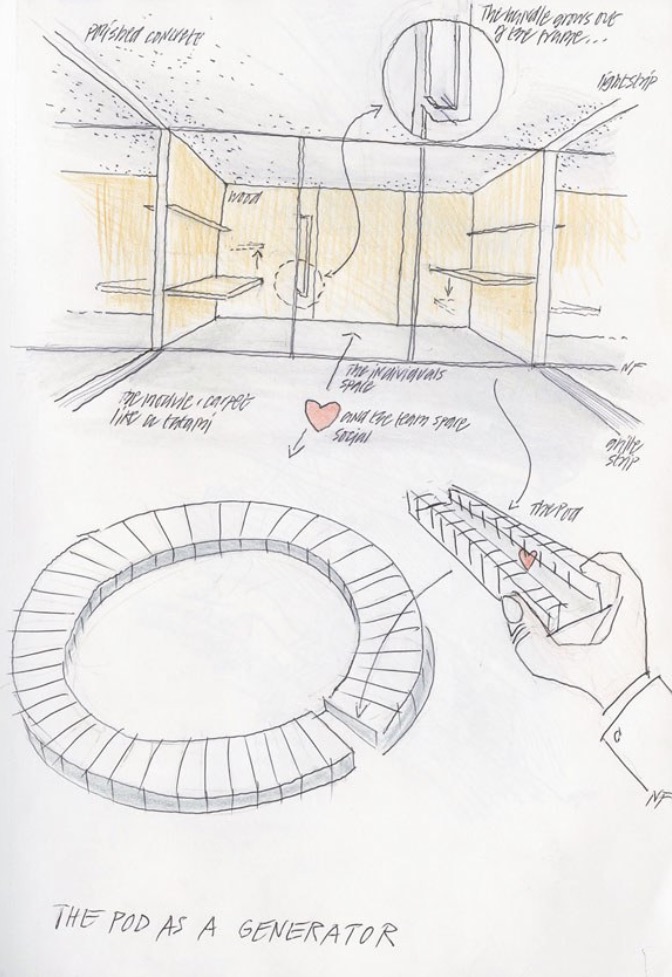 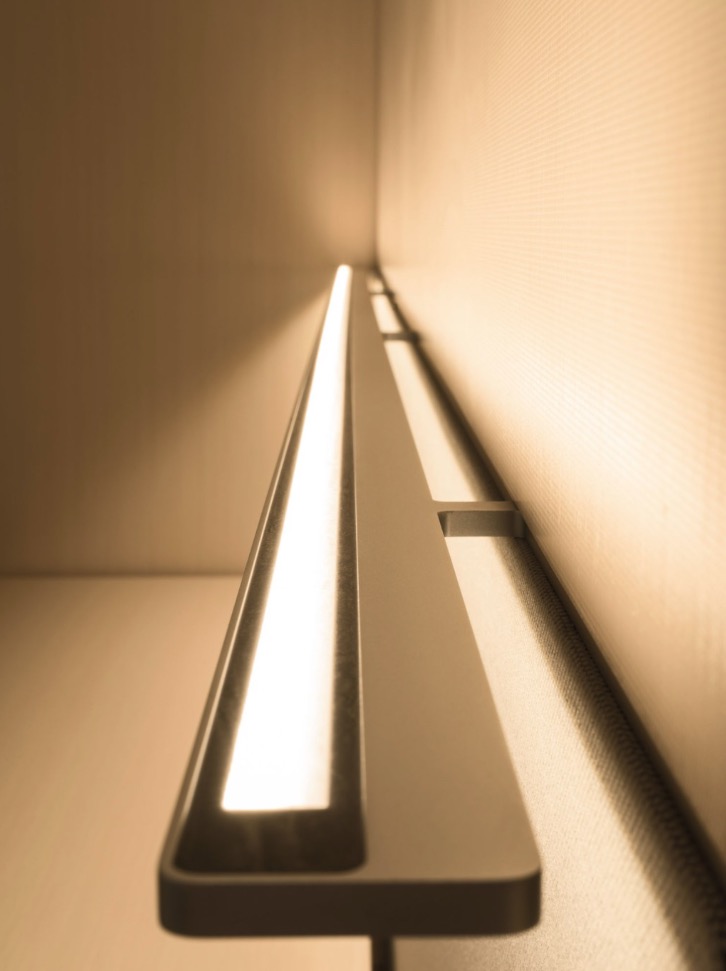 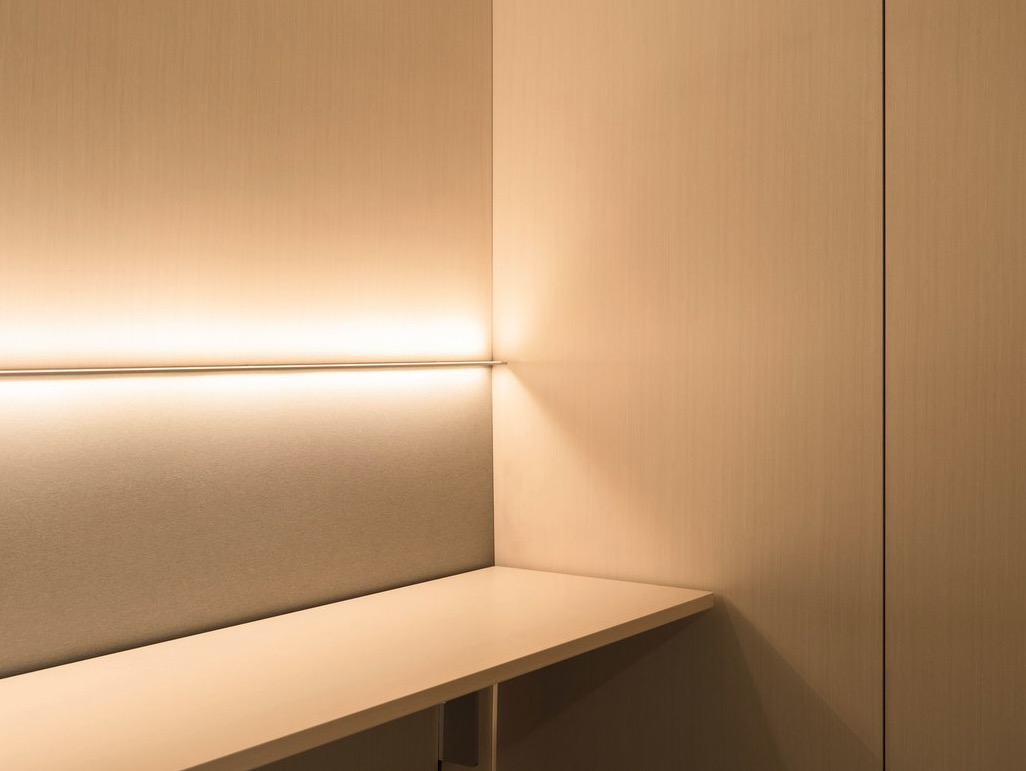 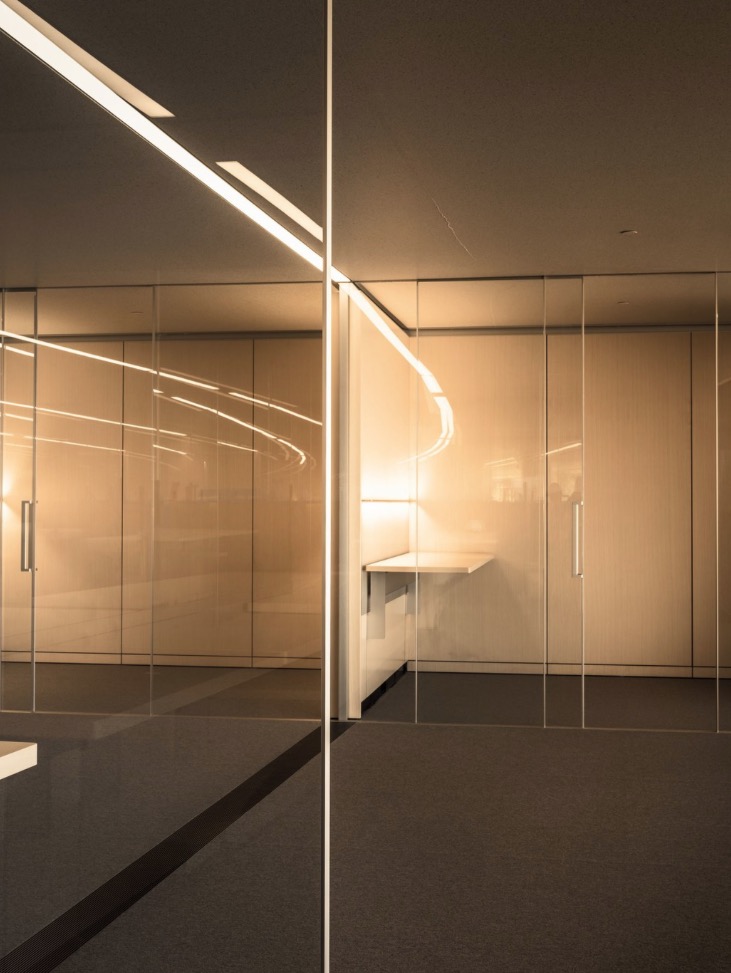 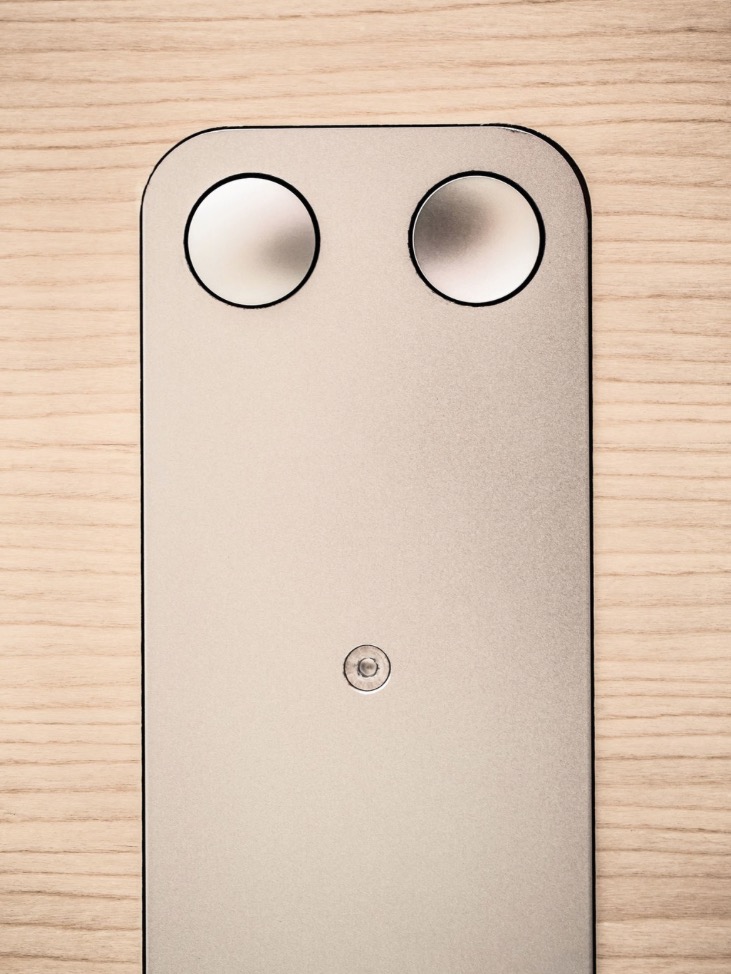 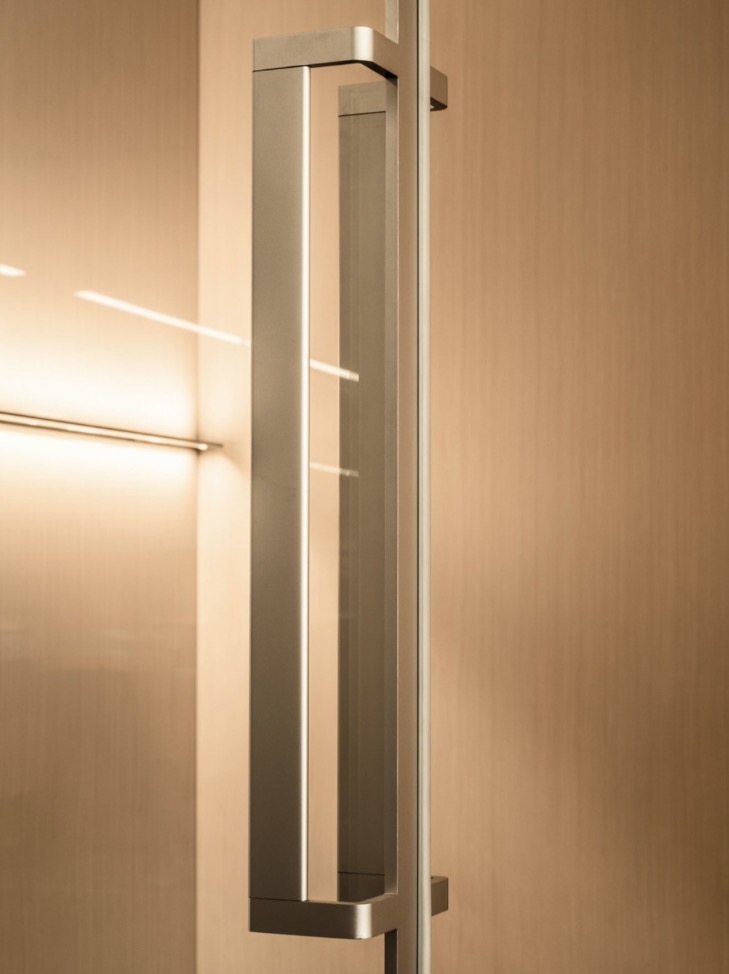