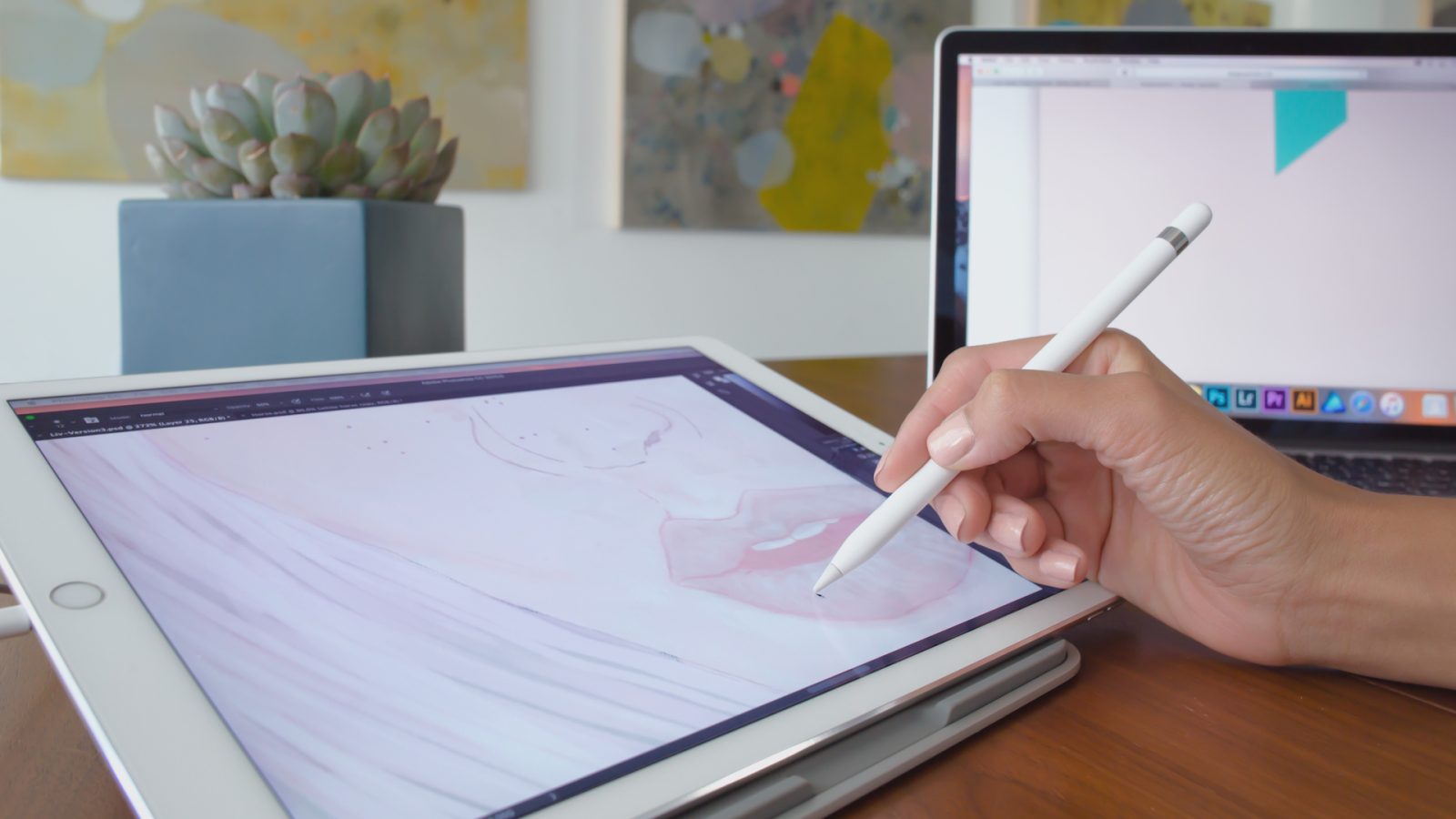 The team behind the popular iOS app Duet Display, which turns your iPad into an external display for your Mac or PC, have just launched the latest version of their app. Duet Display 1.4 comes packed with brand new ‘Pro 2.0’ features that build heavily on the app’s drawing tablet feature for iPad Pro.

With the update, Duet notes that its app can now be used as a professional drawing tablet when paired with an iPad Pro and Apple Pencil. It cites features like pressure and tilt sensitivity, customized pressure curves, color correction, and pixel perfect rendering as key items geared towards the professional market.

When you launch the update, which is version 1.4, you have the option of purchasing Duet Pro 2.0 for a $19.99/year subscription. Users can also take advantage of a 1-week trial to test drive the app’s pro-oriented features.

Once Duet Pro is unlocked, the app will take you through a step-by-step walkthrough and configuration of several of its pro features. The first item, Pressure Curve, lets users customize a graph to adjust the way Duet interprets pressure from the Apple Pencil. 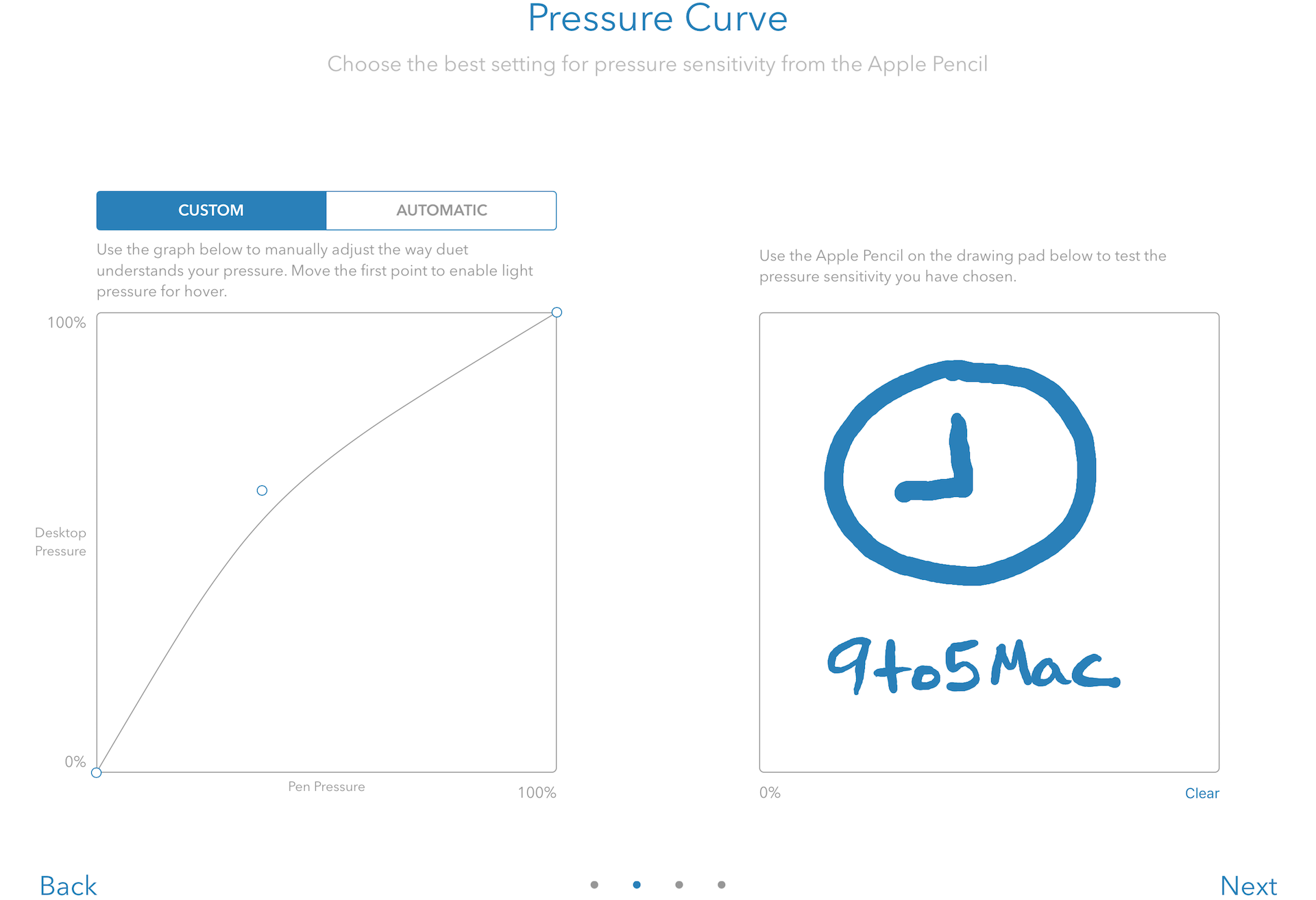 Duet also features a wide variety of gestures to easily interact with a Mac or PC directly from an iPad. Gestures include basic things like left and right-click, along with more advanced operations like hover, undo, redo, and a special four-finger gesture to quickly access Duet’s settings.

Supported apps include popular titles like Affinity Designer and Affinity Photo, along with mainstays like Photoshop, Illustrator, and others. 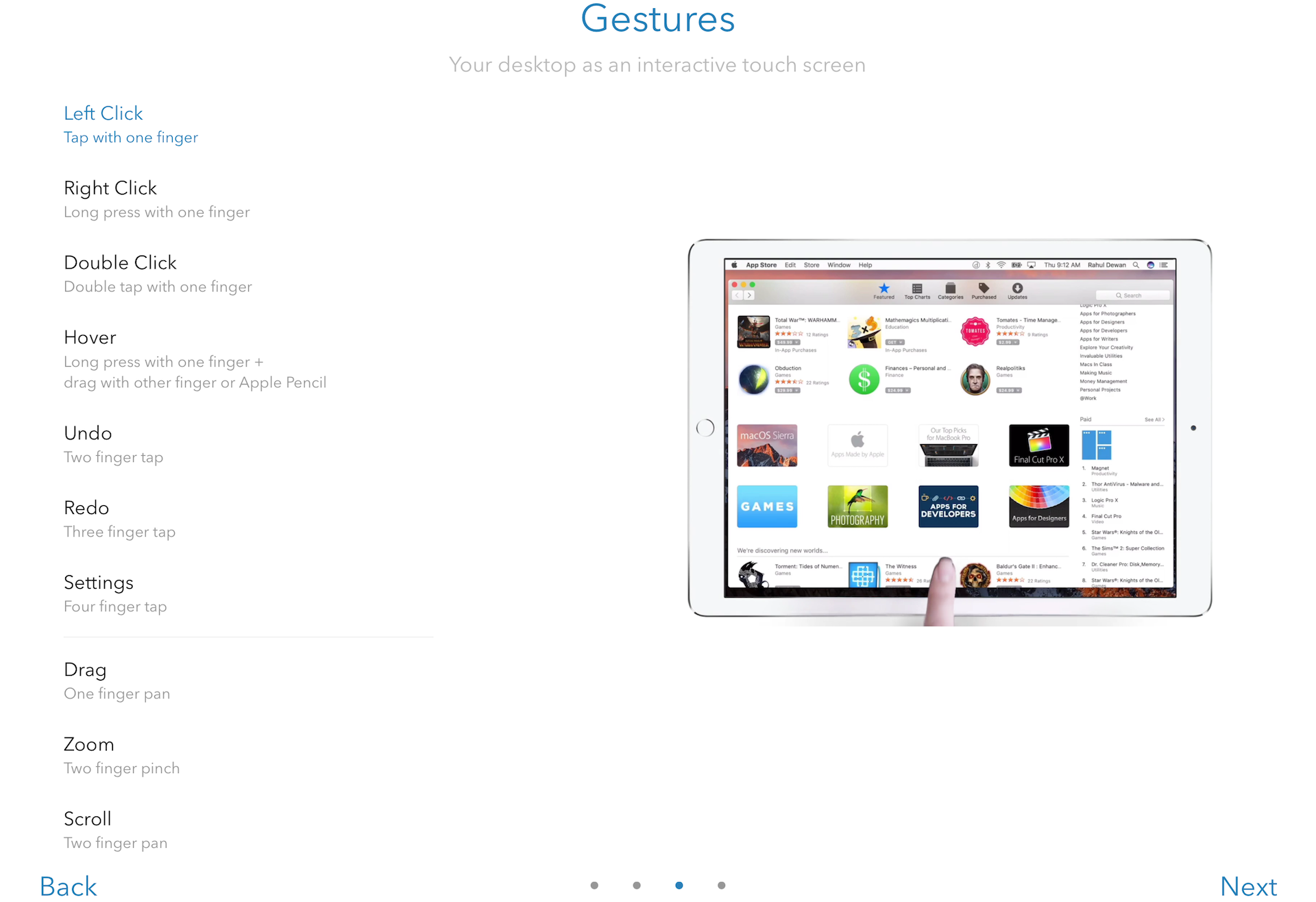 The last item you’ll be asked to configure is Line Lead, which is essentially a predictive preview of the Apple Pencil’s stroke. Line Lead is designed to provide the end-user with more responsive feedback, but the feature can be disabled in settings if you wish. 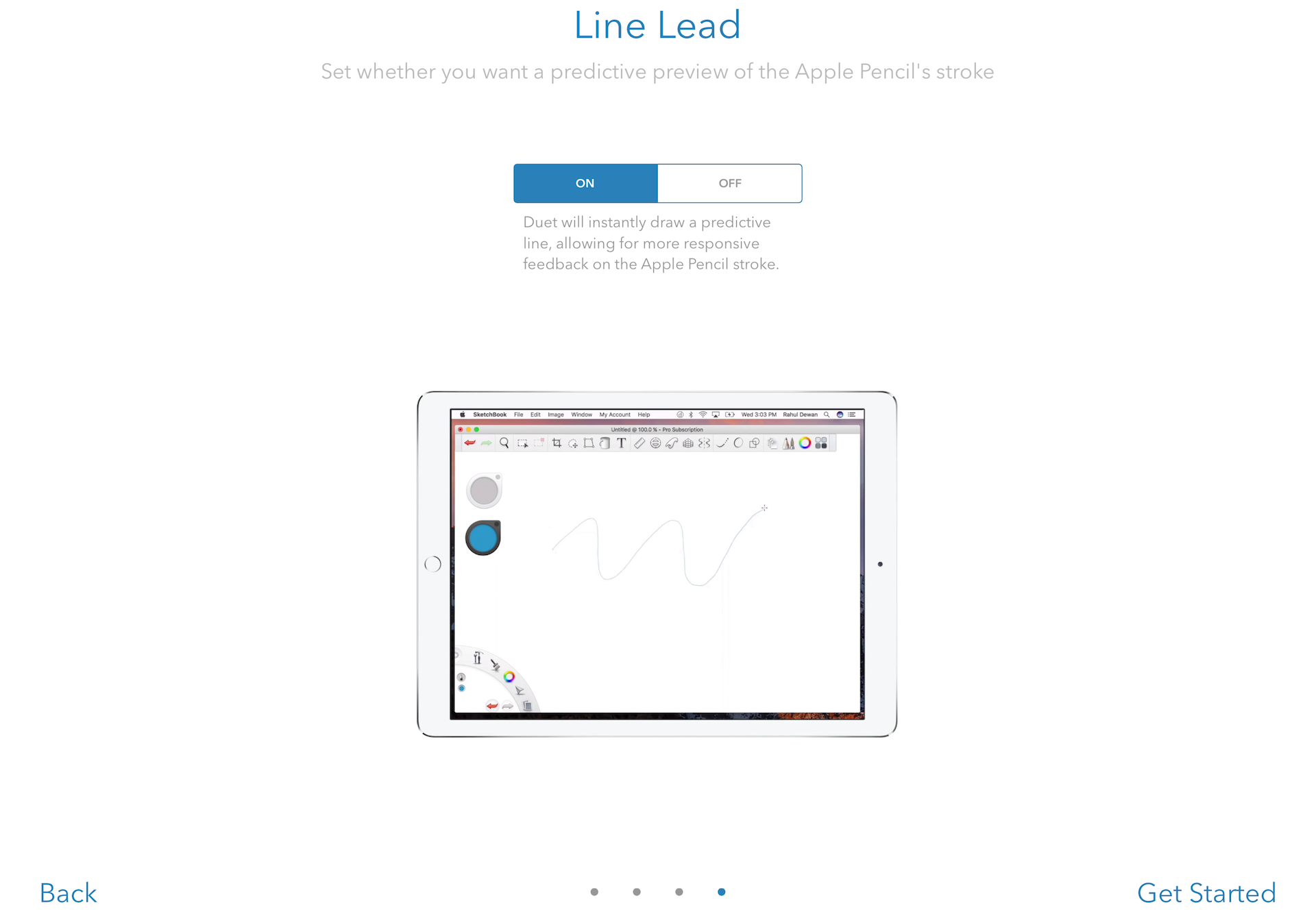 Pro users get access to a new Pixel Perfect setting under the client’s preferences when connected to an iPad Pro. This new setting improves rendering quality and speed for pro users, and aims to deliver a higher quality display in less time. 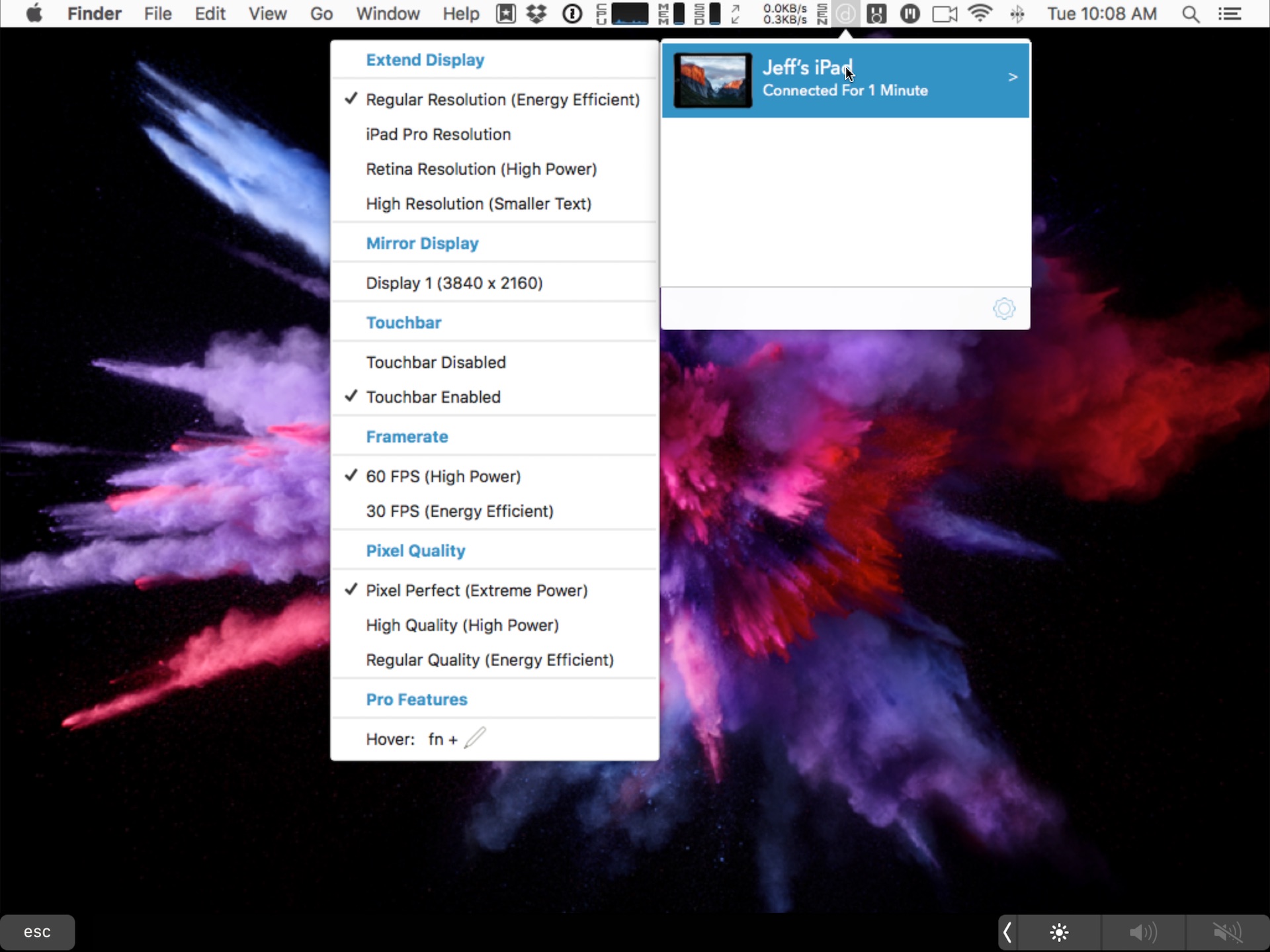 Duet’s update improves the stability & speed of Touch Bar support, a feature that allows you to access the MacBook Pro’s Touch Bar directly from your iPad via Duet.

Back in January we posted a how-to video that shows how to take advantage of the Touch Bar on iPad while running the MacBook Pro in clamshell mode. But even if you own a Mac without a Touch Bar, you can take advantage of Touch Bar support in supported apps by means of Duet.

Duet works on all iOS devices, including iPads, and iPhones, but pro-oriented features will require an iPad Pro. Duet features desktop clients for both the Mac and PC, allowing users to connect by means of a simple Lightning to USB connection.

You can find Duet Display for a special $9.99 introductory price (still rolling out) to celebrate the launch of the version 2.0. Pro features come with a 1-week trial, and are thereafter $19.99 per year.