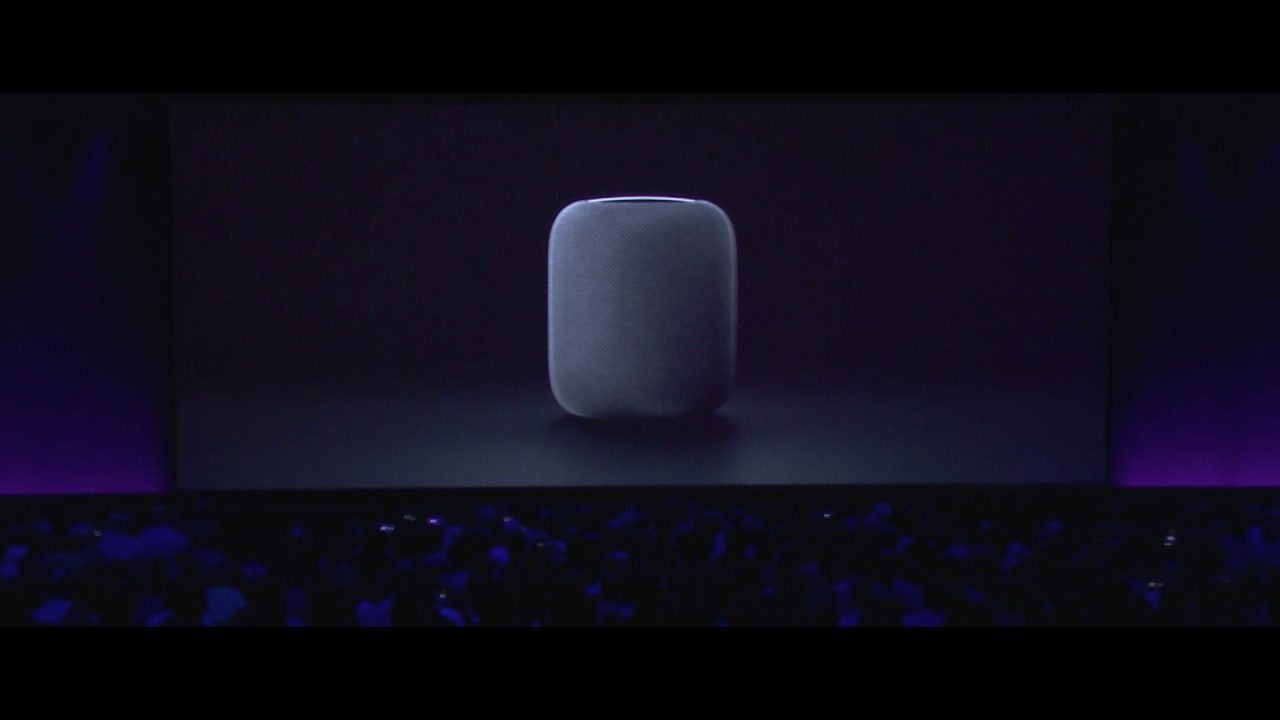 At its Worldwide Developer Conference today, Apple has officially taken the wraps off of its oft-rumored speaker in the form of HomePod. The device acts as a standalone way for users to interact with Siri, play music, and more. Tim Cook touts this as Apple’s effort to “reinvent home music” just as it did with products like the iPad.

Prior to announcing Apple’s product, Phil Schiller explained that Apple has worked to take what companies like Sonos and Amazon have done and create a “breakthrough home speaker.”

Schiller explained that a successful speaker must:

To offer strong sound quality, the HomePod features a 7 tweeter array with precision acoustic horns and directional control. There’s also an Apple-designed 4-inch woofer and it’s powered by Apple’s A8 chip. It measures in at just under 7-inches tall and features a mesh design.

Schiller touted the combination of the HomePod’s small form factor and spatial awareness as something that sets it apart from the competition.

On top of HomePod is a light array that will flash when “Hey Siri” is activated. Schiller says that Apple’s Siri team has worked to integrate all sorts of music-based actions, such as asking who is playing a specific instrument on a track. Apple Music is of course deeply integrated, but at this point it’s unclear if other services such as Spotify will be integrated.

There’s also HomeKit support for using HomePod as a home assistant. HomePod can also act as a HomeKit base station, allowing for remote control of home accessories. Apple shared that HomePod is great for:

As for privacy, Apple says that HomePod will start listening only when “Hey Siri” is prompted. From there, the HomePod uses local recognition and sends an anonymous ID to Apple’s servers. Of course, everything is sent over an encrypted connection.

HomePod will start shipping in the U.S., U.K, and Australia this December for $349. It will come in white and space gray. It will expand to additional countries next year.

HomePod Reinvents Music in the Home Sneak Peek of Apple-Designed Home Music Speaker with Amazing Sound Quality & Intelligence June 05, 2017 03:23 PM Eastern Daylight Time SAN JOSE, Calif.–(BUSINESS WIRE)–Apple® today announced HomePod™, a breakthrough wireless speaker for the home that delivers amazing audio quality and uses spatial awareness to sense its location in a room and automatically adjust the audio. Designed to work with an Apple Music® subscription for access to over 40 million songs, HomePod provides deep knowledge of personal music preferences and tastes and helps users discover new music. HomePod features a large, Apple-designed woofer for deep, clean bass, a custom array of seven beam-forming tweeters that provide pure high frequency acoustics with incredible directional control and powerful technologies built right in to preserve the richness and intent of the original recordings. HomePod will be available starting in December, initially in Australia, the UK and the US.

“Apple reinvented portable music with iPod and now HomePod will reinvent how we enjoy music wirelessly throughout our homes,” said Philip Schiller, Apple’s senior vice president of Worldwide Marketing. “HomePod packs powerful speaker technology, Siri intelligence and wireless access to the entire Apple Music library into a beautiful speaker that is less than 7 inches tall, can rock most any room with distortion free music and be a helpful assistant around your home.”

HomePod is designed for voice control with an array of six microphones, so users can interact with it from across the room, even while loud music is playing. By saying, “Hey Siri, I like this song,” HomePod and Apple Music become the perfect musicologist, learning preferences from hundreds of genres and moods, across tens of thousands of playlists, and these music tastes are shared across devices. Siri® can also handle advanced searches within the music library, so users can ask questions like “Hey Siri, who’s the drummer in this?” or create a shared Up Next queue with everyone in the home. HomePod, Apple Music and Siri deliver the best music experience in the home that streams ad-free directly to HomePod.

As a home assistant, HomePod is a great way to send messages, get updates on news, sports and weather, or control smart home devices by simply asking Siri to turn on the lights, close the shades or activate a scene. When away from home, HomePod is the perfect home hub, providing remote access and home automations through the Home app on iPhone® or iPad®.

At just under 7 inches tall, HomePod represents years of hardware and software innovation:

– Apple-designed upward-facing woofer, paired with the custom A8 chip, enables bass management through real-time software modeling that ensures the speaker delivers the deepest and cleanest bass possible, with low distortion;

– custom array of seven beam-forming tweeters, each with its own amplifier, provides well-balanced smooth timbre as well as precise directional control of a multitude of beam shapes and sizes;

– Apple-designed A8 chip provides the brains behind the advanced audio innovations;

– automatic room-sensing technology allows HomePod to quickly learn its position in a room, whether it’s in a corner, on a table or in a bookshelf, and within seconds, is perfectly optimized to deliver an immersive music listening experience wherever it is placed;

– six-microphone array with advanced echo cancellation enables Siri to understand people whether they are near the device or standing across the room, even while loud music is playing;

– Siri waveform appears on the top to indicate when Siri is engaged, and integrated touch controls also allow easy navigation;

– automatic detection and balance of two speakers using both direct and reflected audio to deliver amazing audio wirelessly for an even more immersive experience; and

– easy setup that is as intuitive as setting up AirPods™ — simply hold an iPhone next to HomePod and it’s ready to start playing music in seconds.

Security and privacy are fundamental to the design of Apple hardware, software and services. With HomePod, only after “Hey Siri” is recognized locally on the device will any information be sent to Apple servers, encrypted and sent using an anonymous Siri identifier.

HomePod will be available for $349 (US) in white and space gray starting in December initially in Australia, the UK and the US.* HomePod is compatible with iPhone 5s and later, running iOS 11.

* Pricing in Australia and the UK will be announced later this year.

This device has not been authorized as required by the rules of the Federal Communications Commission. This device is not, and may not be, offered for sale or lease, or sold or leased, until authorization is obtained.

© 2017 Apple Inc. All rights reserved. Apple, the Apple logo, HomePod, Apple Music, Siri, iPhone, iPad and AirPods are trademarks of Apple. Other company and product names may be trademarks of their respective owners.