Comment: Apple’s ‘problem’ with the iPhone 8 is much more of an opportunity 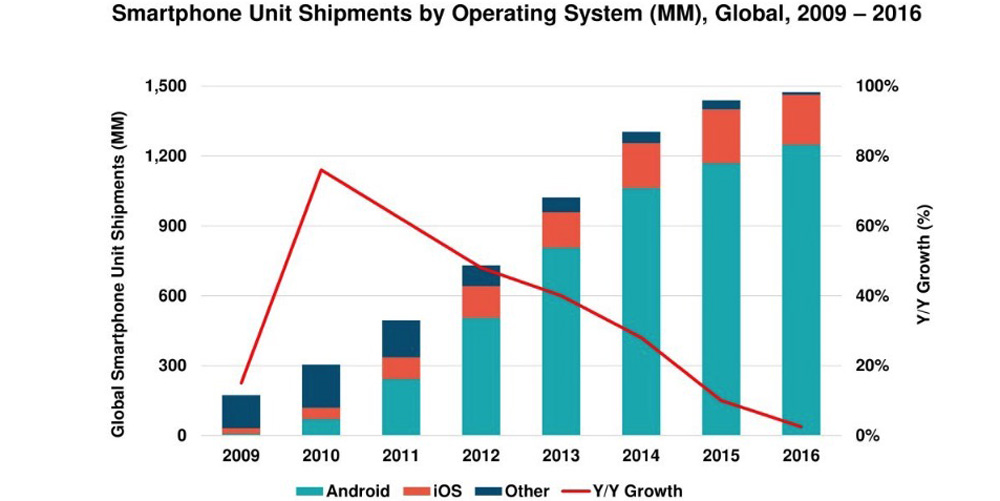 One of the charts within an influential presentation on the state of the tech union at last week’s Code conference illustrated a ‘problem’ with Apple’s apparent plans for the iPhone 8. The company is believed to be aiming to sell the first ever $1000+ iPhone at a time when global smartphone shipments are essentially flat.

Business Insider argues that the problem shown in the chart by Kleiner Perkins Caufield & Byers analyst Mary Meeker is this. Apple has historically taken around 15% of the smartphone market. When the market as a whole was growing, Apple could happily take its premium slice and see continued growth. But when the market is stagnant, growth can only be achieved by either growing its share, or boosting the overall smartphone market.

Can the company really do this, asks the piece, while trying to push its prices even higher … ?

But now the entire market has stopped growing. So Apple must either take a greater share of the market — which it has never done before — or expand the market as a whole […]

Can Apple take a greater share of the market when it wants $1,000 for a phone? One thousand dollars is nearly $200 more than the current average price of an iPhone ($815 in the US or £696 in the UK, according to Deutsche Bank’s ranking of iPhone global prices). But it is a psychologically testing barrier for most consumers. Most phones do 90% of the things an iPhone can do. Do you really need to spend the equivalent of half a month’s average income on a slightly better phone?

To underline the challenge, the piece notes that iPhone sales declined in four out of the last five quarters.

But that’s not surprising. Apple ended its usual tick-tock approach to iPhone models – a new design one year, and mostly software updates the following year – with the iPhone 7. Instead of a completely new design, it stuck with something very close to the iPhone 6/6s.

Now, some techies take the view that the S models are the ones to buy, as that’s when you get new features. But for the mass market, the design is much more important, so they were given very little incentive to buy what looked very much like last year’s model.

It was also pretty obvious that there had to be a good reason for Apple to release a second ‘tock’ model: namely that it has something much more exciting in the works. Views on a special 10th anniversary phone have been mixed, many arguing that Apple doesn’t typically pay much attention to anniversaries, and that it releases new products when it is ready. But whether or not the anniversary played any role in the decision, it’s long been clear that this year’s iPhone is going to be something special.

The smart decision, then, for those don’t buy every year, but would have been due to buy last year, was to wait. And that’s exactly what the market seems to have done. The stagnation in iPhone sales as people wait for the iPhone 8 is part of the reason overall sales are flat.

When Apple finally unveils the iPhone 8, it will be iPhone 6 time all over again – only more so. A lot of pent-up demand will be released. And even some of those who weren’t planning an upgrade this year will likely be tempted. Almost every analyst around is predicting a ‘super-cycle’ of sales, and I don’t think a $1000 price-point is going to deter buyers. If they want the new model, they’ll do what iPhone buyers have always done: pay a premium for the phone they really want.