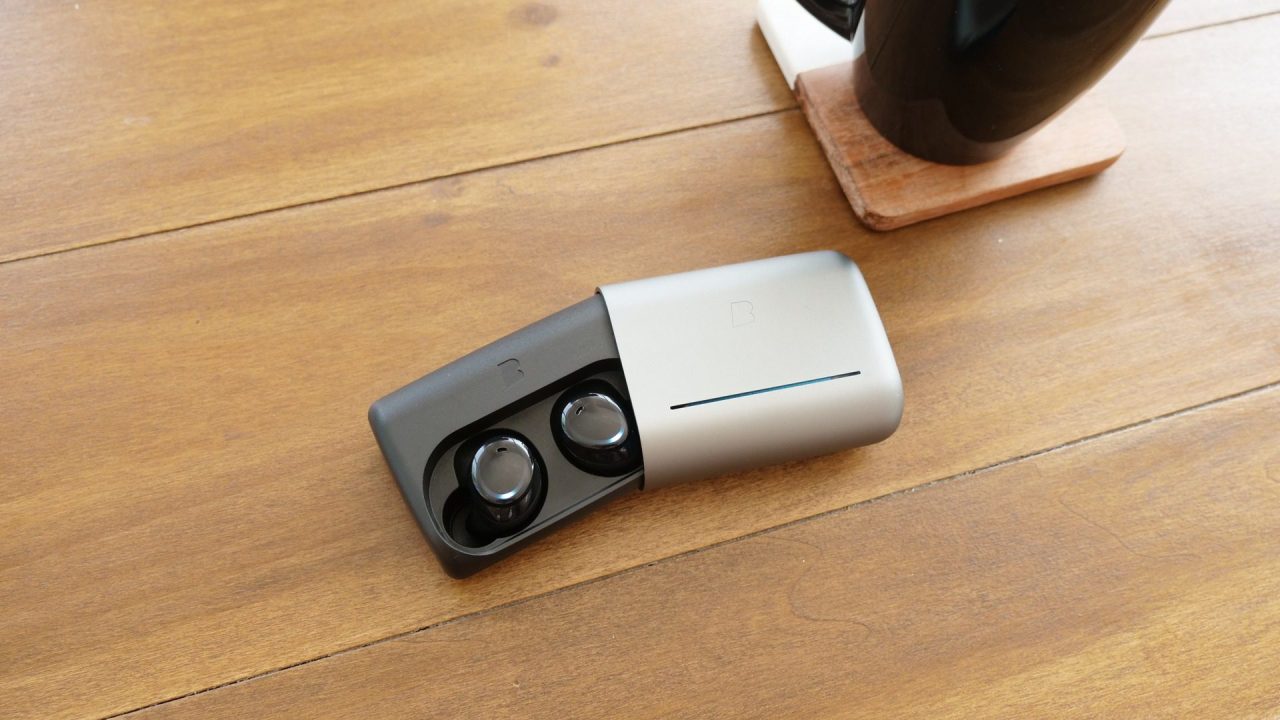 Long before the AirPods hit the market, Bragi hit the ground running with their true wireless earphones on Kickstarter. Three years later the company has released an upgrade on their original Dash. The Dash Pro brings improvements to Bluetooth connectivity, microphone quality, and a new live language translation ability.

Having spent a full month using the Dash Pro over my AirPods, I’ve dissected as much as I could out of these wireless earphones. The original Dash didn’t raise praise from us before, but could the Dash Pro be Bragi’s comeback kid story?

Over the past decade I’ve discovered that I just can’t wear any in-ear headphones comfortably. It’s as if the ear-tips don’t want to sit in my ear canal and simultaneously stretch the canal while slowly slipping out. The Dash Pro is no exception. Though the company includes a multitude of ear-tips, the only one that remotely felt comfortable out of the box were the extra small FitSleeves. These silicon sleeves fit over the Dash Pro and provide a secure fit ideal for various workout-like activities. With those in, I could comfortably wear the Dash Pro for hours a time.

In looking for a solution to the ear canal discomfort, I eventually discovered the Dash Pro compatible Comply True Wireless foam tips. While I wish they were a tad bit smaller, the comfort they brought was even greater than Bragi’s own FitSleeves.

The distinction here should be clear though, the only discomfort is the ear tip and not the overall device. While the Dash Pro looks big and bulky, once in the ear it sits flush and feels natural. I can just about always feel my AirPods “hanging” in my ears, but the Dash Pro was only noticeable when I would more vigorously shake my head. 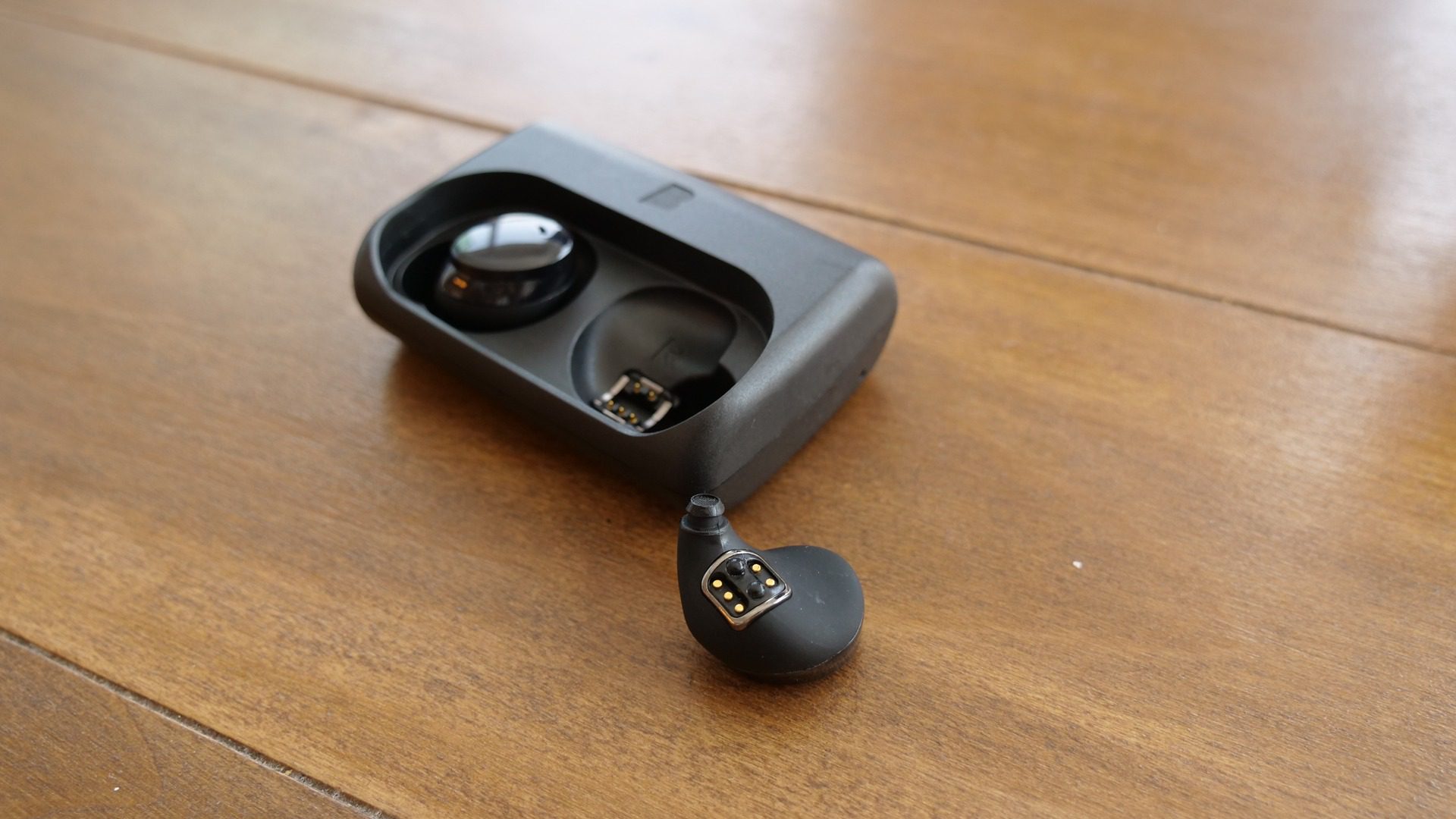 Bragi Dash Pro without an eartip

In sound profile testing, the Dash Pro seemed to be mixed at a base level of making sure all levels came in as clear as possible. Podcasts were audibly clear, acoustic songs sounded pleasant, but bass-centric sounds fell to the wayside. When a bass drum would kick in, you could hear where it hit the ceiling and just wouldn’t give the punch that even the AirPods were able to. It sounded as though the bass was limited to just before the point where it could get muddled.

For a pair of earphones at a premium price of $329, I wish the Dash Pro had an audio equalization option within the Bragi app. Even at its lower price point, the Jaybird X3 has a variety of custom community-made EQ options. Bragi is confident that their current sound is solid enough for most users, and if not the $499 tailored by Starkey Dash Pro is available for those with money to burn.

The Starkey tailored Dash Pro are custom-molded to fit the wearer’s unique ear and include the Knowles Balanced Armature Speakers for a better sound. It’s a costly option, but if you’re looking for a custom-molded true wireless earphone experience it sounds like the best option. Unless Bragi shows efforts in updating the firmware in their Bragi Dash Pro earphones regularly, I don’t see many ever opting for an even costlier premium for earphones.

The most noticeable experience that the Dash Pro brings over AirPods is multiple audio control options. iOS 11 does introduce some new controls for the AirPods, but they still feel half-baked. The Dash Pro has everything I wish the AirPods had, all built into it’s touch-based controls on the individual earphones. With different gestures and swipes, I can control volume, playback, activate Siri, start a running workout, and navigate through the Dash Pro’s virtual menus.

By partnering with iTranslate, the Dash Pro is able to provide live language translations in-ear. While in my testing the feature did perform well, it was not without its caveats and oddities.

To start, the live voice translation feature requires a subscription to iTranslate Pro.

I wasn’t able to find any technical reason why the Dash Pro is the only supported Bluetooth earphones with iTranslate. When I paired my AirPods to my iPhone and launched the app, iTranslate would only use the microphone from my phone and ignored the AirPods. Tapping the small Bluetooth icon in the app presents a small AirPods-like pairing window for the Dash Pro only. The “technical” limitation here seems anything but, and more of a strategic partnership that should be mutually beneficial for both companies (if things go well).

Bragi promotes the Dash Pro as “intelligent earphones” with its in-ear translation integration and updatable Bragi OS. This is an area I’m looking forward to seeing grow within the company. Their most recent update to Bragi OS only added more language options, but I’m looking forward to when the company can truly build on the “OS” ideal. The Dash Pro includes built-in activity tracking, heart rate monitoring, in-ear translation, a virtual 4D menu, and even a vocal assistant during initial configurations.

These key areas are prime for a virtual assistant to bind them all together. Instead, they’re all connected but in tenuous ways. I’d love the ability to activate Bragi’s assistant and ask for my heart rate or to start a running workout. With Bragi OS’ current iteration I’m regulated to looking through the iOS app or navigating the earphones virtual menus. 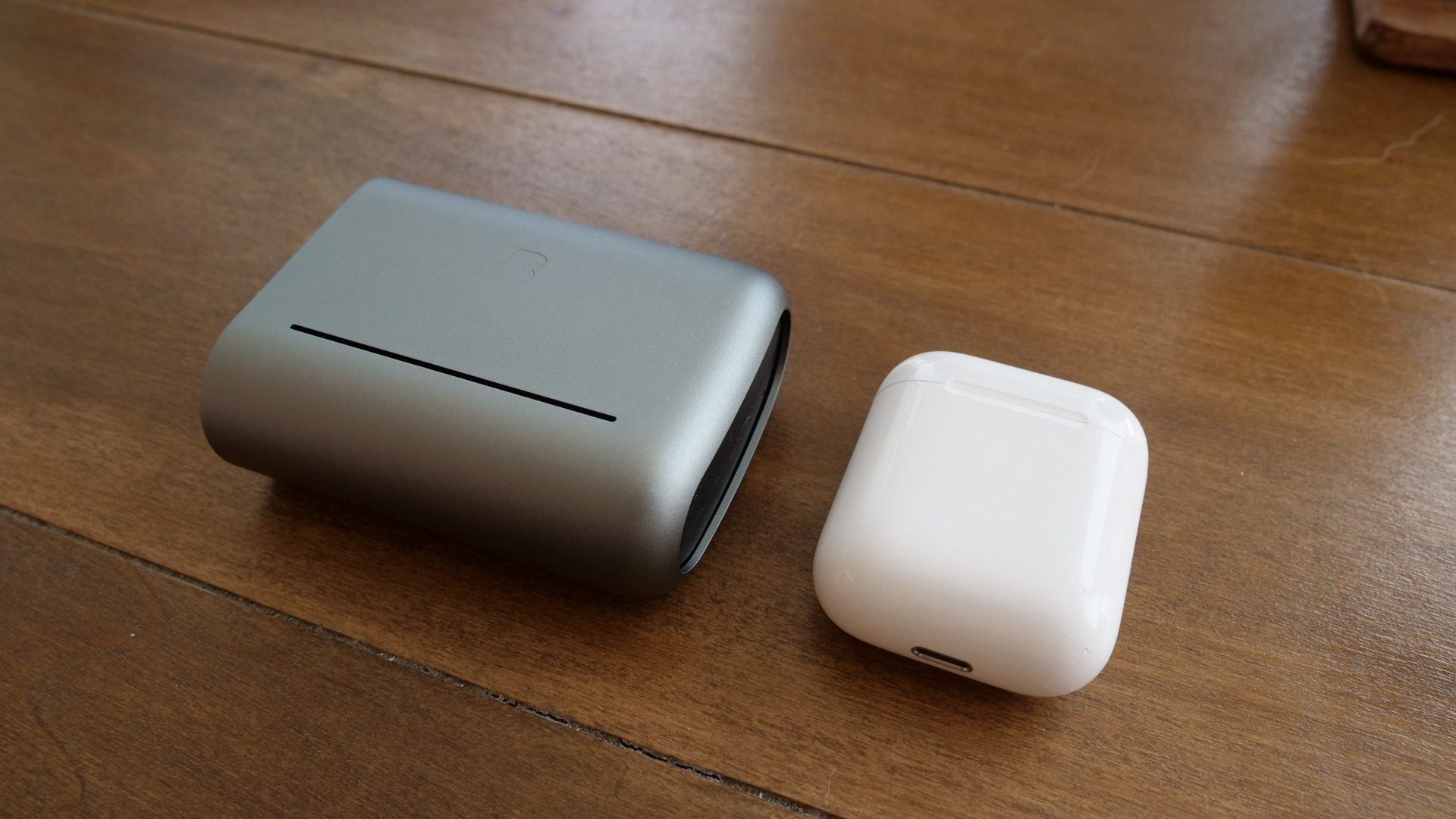 I couldn’t write a review on the Dash Pro without at least mentioning its charging case. Other than looking comically large alongside the AirPods’ own, it did provide some issues during charging. There have been multiple times where I would drop them in, feel the magnet latch into position, only to return hours later with an uncharged earphone. It happened enough that I started becoming acutely aware of the positioning every time I dropped the earphones in. It took away from the device’s “plug and play experience” I was so used to with the AirPods.

Which brings up the Dash Pro’s strangely missing numerical battery indicator. Just like the previous Dash, the Pro earphones can be shaken and shown a different color for each battery level. Why Bragi hasn’t opted for showing a numerical value in app, or through the Batteries widget on iOS is a mystery. Regardless, I easily hit right around that five-hour battery life mark that Bragi promised with the Dash Pro. 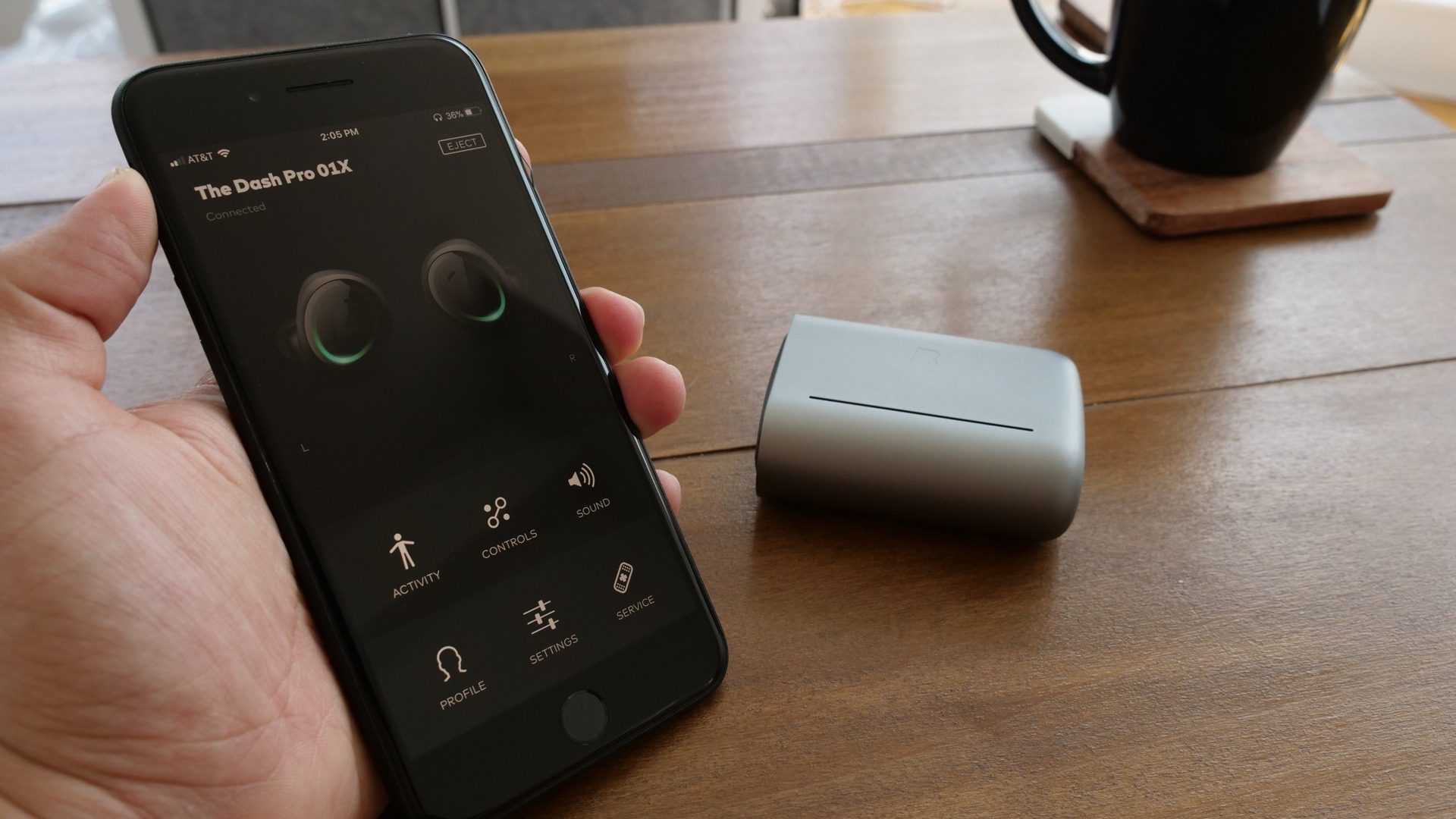 One feature I did not expect to love and wish my own AirPods had was the optional Audio Transparency. With the feature off, you and your music are sealed off from the outside world. With the feature on, the Dash Pro will take audio from your surroundings and mix it in live with your currently playing music. This means no longer having to endure the coffee shop’s music while waiting for the barista to call out your order. With Audio Transparency on you’ll be able to hear her call it out while playing whatever you’d like in your ears.

I loved this feature so much I found myself not taking out the Bragi as I went about my day, regardless if I was playing music or not. There are bugs with the transparency, high frequency sounds like a car’s brakes causes it to stop working, but overall it’s a pleasure to use.

In our previous Dash review, Lovejoy mentioned his issues with call quality and Bluetooth connectivity. With the Dash Pro, I didn’t face either finding both experiences to be on-par with the AirPods.

At a price point of $329, I’m not quite sure how to recommend the Bragi Dash Pro. Apple’s AirPods sit at $159, a price that many of our readers already consider expensive.We’ve covered some true wireless earphones before including the cheaper $99 Earin M-1 and Anker’s upcoming Liberty+, and for many consumers, those are likely an easier start. The Dash Pro is an acceptable upgrade from The Dash, but justifying its cost to first-time true wireless earphone buyers will be a difficult task. Bragi’s advantage here will be in continuously upgrading the earphones through the Bragi OS and providing fresher experiences than what others can. The partnership with iTranslate, while not perfect, is a good step in a direction of bringing the “computer in ears” world that Bragi promotes.

The Bragi Dash Pro is available now for $329 from Amazon and Bragi.com, with The Dash Pro tailored by Starkey at $499.