Opinion: Are subscription-based apps the future, or will they implode? 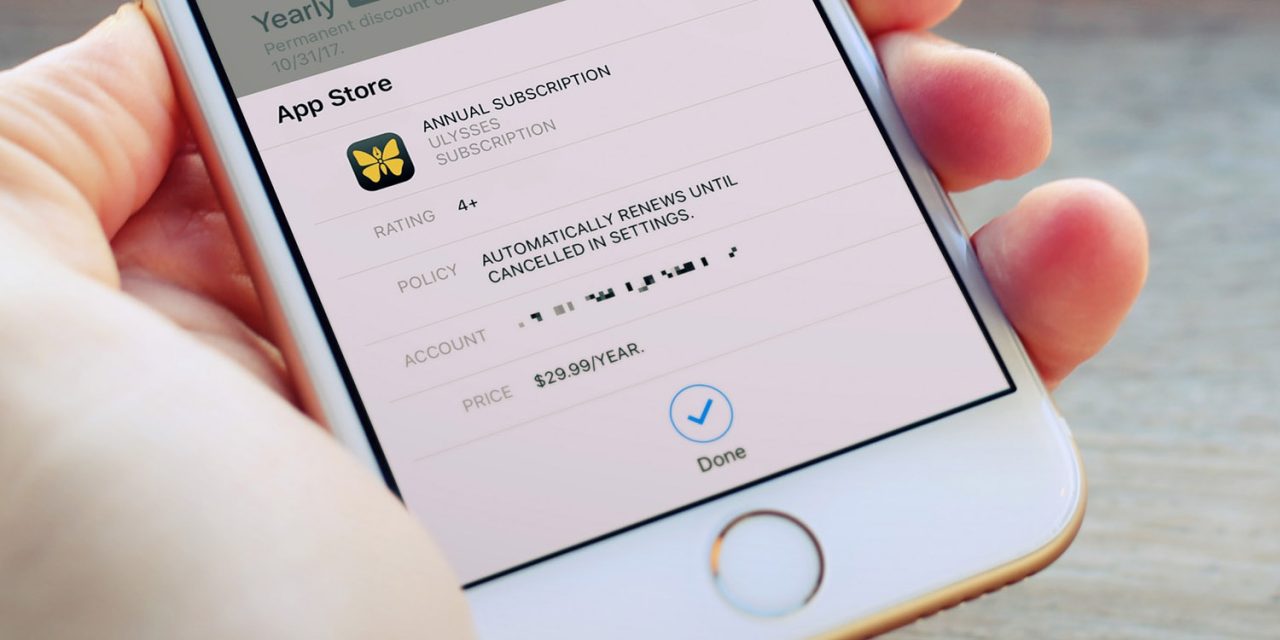 The decision of the popular writing app Ulysses to switch from a one-off purchase to a monthly or annual subscription has attracted a great deal of criticism. Here’s a sprinkling of views from the comments.

I bought this on iOS last week. As far as I’m concerned, that was a total waste of money now they’re moving to this subscription model.

This “rent your software” crap needs to stop, and people need to stop defending it.

Ulysses is a great app and I wish the developers all the best, but I’m out, looking for alternatives.

Read: “Popular iOS and Mac writing app Ulysses Digs Its Own Grave and Gets In”

The company, of course, has its own rationale …

We want to make sure the app will be around for years and years to come. We want to heavily invest in its development, and this requires the right setting for our team, our families and our users. Writers want to rely on a professional tool that is constantly evolving, and we want to keep delivering just that.

The company says that anyone who bought the app when it first launched has now received nine major updates at no cost, and that this isn’t sustainable.

And, of course, Ullysses isn’t the only app to have switched to a subscription model – nor the only company to come under fire for doing so.

The highest-profile example is Adobe. The company first started offering its subscription-based Creative Cloud service back in 2012. At that point, users could choose between buying individual apps, buying packages – or signing-up to a monthly or annual subscription.

But just a year later, the company announced that it would no longer sell its Creative Suite software outright, and that the only way to get the latest versions would be via subscription. Even for apps you could still buy outright, you didn’t get the same functionality as the subscription version.

We’re seeing the same trend everywhere. Right now, you can still buy individual TV shows and movies, but iTunes popularized the idea of renting them instead, and companies like Netflix take things further with a fixed monthly subscription for all-you-can-eat streaming access.

And, of course, Apple Music now gives us the option of renting, rather than owning, our music.

The idea of renting rather than owning isn’t without its benefits, of course. Developers get a steady stream of income, which enables them to keep updating apps and adding new features, while users get access at a more affordable up-front cost.

And for some apps and services, it makes sound financial sense. Take music as an example. Back in the days when the only option was to buy albums, many of us spent thousands – sometimes tens of thousands – of dollars over the years. A young person today can lay out ten bucks a month and get instant access to more music than any of us will ever own in our lifetimes. Having a $10 cost of entry to almost all the music commercially available is quite an incredible thing. If I were starting out today, I honestly don’t know whether I’d choose to own any music.

In software, Adobe was able to get away with it for much the same reason. Outright purchase of a suite of its apps could again cost thousands, and you knew it was only a matter of time before you’d need to pay to upgrade to the latest version. Indeed, many photographers found themselves forced to upgrade when they bought a new camera as the RAW converter for it would only be available for the latest version of Lightroom. An affordable monthly fee was a decent alternative.

In TV and movies, renting rather than owning can again save you money. Many have dispensed with traditional TV packages, and buying movies outright, and instead pay just $8-12 per month for a Netflix subscription. Provided the shows you want are available, that’s a great deal.

Some people even effectively choose to rent their iPhone. In the old days, you did this as a hidden cost in your carrier’s plan, now you can do it through Apple’s iPhone Upgrade Program. That’s again a way of turning a large lump-sum payment into a more manageable monthly one.

But there are, I think, four reasons why many of us feel reluctant to switch from outright purchase of apps to a subscription model.

The first is purely psychological. We’re used to paying a one-off fee, with maybe an occasional and optional major update fee some years down the road, and that being it. The idea of instead being forced to lay out cash every month for continued access to an app feels somehow wrong. Many feel they are being taken advantage of, especially if it’s an app they’ve used for years and come to rely on.

The second is the lifetime cost. I can’t even remember now what I paid for my three versions of Lightroom, but from memory the last one I bought – Lightroom 3 – cost me about $150 back in 2011. I’m still using it today. If I’d instead been paying $9.99/month, that same app would by now have cost me $720 – and counting. Sure, the subscription includes updates, but the version I have does everything I need.

Third, there’s the sheer weight of a growing number of monthly payments. It used to be that we had a mortgage or rent, a car payment, our household bills and maybe a loan payment. But these days, it seems everyone wants to charge us a monthly fee for everything. Each of them may be individually small – $5 here, $10 there – but they add up. In a still-difficult economy, when many want to reduce their fixed outgoings, more and more companies seem determined to add to them.

Finally, there’s the discomfort may of us feel with recurring payments in general. It’s all too easy to sign up for something – be it a free trial or a service we use for a while – and then forget to cancel. We all have apps cluttering up our devices that we haven’t used in ages. If those apps were charging us a monthly fee, we could well be paying not to use them.

The first objection may be merely a case of getting used to a different model, but the others are, in my view, substantive reasons to dislike subscriptions.

I do, of course, see the developer viewpoint. The money we spend on an app pays for the work they did up to the point at which we bought it. The work needed to update it to keep it compatible with later versions of iOS and macOS, and to add new features, is effectively only covered by the revenue from new customers. Unless they can keep growing their market, they can’t cover the ongoing development costs.

But a subscription isn’t the only way to do this. To use another popular writing app as an example, Scrivener provides dot updates free – paid for by the income from new customers – and charges for major updates. Paid updates are very infrequent. Scrivener 2 was released more than six years ago, and Scrivener 3.0 will again be a paid update later this year.

I don’t begrudge those paid updates in the slightest. If they are infrequent (say every 2-3 years at most), cost less than buying from scratch and are justified by new features, I will smile as I hand over the cash. In the case of Scrivener, it’s an app I couldn’t live without, and it’s clear that a huge amount of work has gone into the upcoming version.

To my mind, that’s the better approach. It’s less expensive. You can see what you’re getting for your money. And you don’t feel exploited because upgrading is optional – you can pay for the new features if you want them, and not if you don’t. (Granted there may be times when an iOS or macOS upgrade will break an app, but those are optional too.)

I can’t help feeling that the whole subscription model is at some point going to implode. Some people will simply refuse to get on board at all – like those who say they are done with Ulysses – while others will eventually reach breaking point. One or two low-cost subscription apps, well, ok, maybe. But what happens when it’s ten? Twenty? At some point, people are going to say enough is enough.

Do you agree? Or do you think the benefits outweigh the drawbacks? As ever, please take our poll and share your thoughts in the comments.