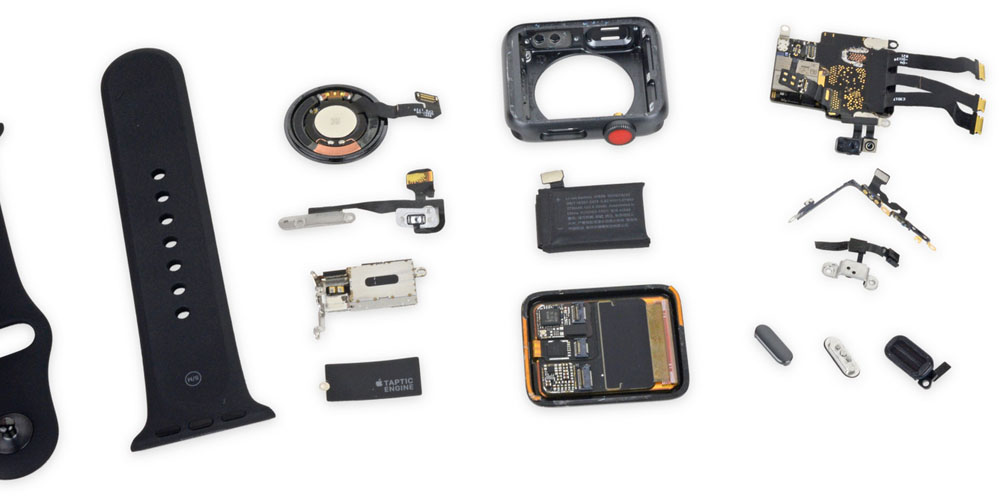 Not long after its teardown of the iPhone 8, iFixit is back with a similar look at the innards of the Apple Watch Series 3, LTE version.

The biggest change, of course, is a while new set of radio chips for the LTE functionality. But the company says there’s one other feature touted as new by Apple which is actually also present in the Series 2 …

iFixit said that it was puzzled by this.

Apple touted a new barometric altimeter when it introduced the Series 3—much to our confusion, since we’d found a barometer in last year’s model. Was the Series 2 almost an LTE watch? Or did Apple just want to sell a few more watches before Christmas? The world wonders.

The pressure sensor has changed position, however, now sitting in the space in the vent hole next to the microphone, while the vent has moved to a position next to the diagnostic port.

iFixit also notes that the radio antennas also haven’t changed much, suggesting that Apple may already, in the Series 2, have been putting in place everything needed for the LTE functionality bar the chip itself.

In a weird twist of tech, this Apple Watch added features without really changing… at all. So much so that we’re tempted to speculate that the Watch hardware has been LTE-ready for a generation already. The antennas and display haven’t changed much, and there’s some new silicon, but that’s about it.

Interestingly, Apple hasn’t really boosted the battery capacity in the new watch, despite the additional demands being made on it by LTE use.

Unsurprisingly, the repairability rating of the Series 3 is identical to its predecessor, but that’s still an impressive 6/10. The company says that both screen and battery replacements are feasible, and it mostly loses out thanks to ‘incredibly minute and fragile components’ – not really a surprise in something this small.