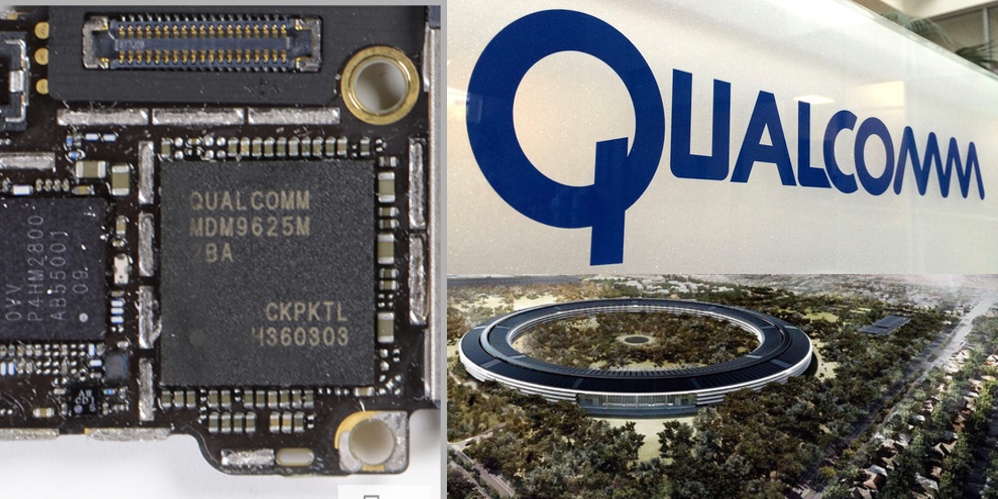 A new report from Bloomberg goes into detail about how relations between Apple and Qualcomm soured so quickly, after years of collaboration, featuring quotes from Qualcomm executives and excerpts from a new interview with Apple SVP Bruce Sewell.

Sewell points out that the Qualcomm modem inside an iPhone costs Apple about $18. In addition, Apple has to pay 5 percent of the phone’s sale price. It is that royalty that Apple deems exorbitant and unfair.

According to court filings reported by Bloomberg, a senior Apple executive (assumed to be Tim Cook) spoke to a Samsung executive (likely Vice Chairman Jay Lee) and ‘urged’ Samsung to put pressure on South Korean regulators to amp up their antitrust investigation into Qualcomm.

This pressure would ultimately lead to a lowering of Qualcomm’s prices, which would benefit both Apple and Samsung. Qualcomm alleges that this conspiring plot is anti-competitive. Apple SVP Sewell says that ‘nothing improper happened’.

“I don’t know what conversation they are talking about,” says Bruce Sewell, the company’s general counsel, in an interview at headquarters in Cupertino, Calif. “For Apple to have said to Samsung, ‘You guys are in Korea and you should be watching this case carefully,’ doesn’t seem to me to be anything beyond simply the kind of conversation two CEOs might have.”

The Korean governing body ruled against Qualcomm, and ordered changes to its pricing scheme. In the US, the FTC filed a complaint in January. Apple quickly followed with a $1 billion lawsuit again claiming that Qualcomm’s per-device royalty was unfair.

Sewell says that Apple had put up with Qualcomm’s demands for many years as they had no other choice for the iPhone modem supply. When Apple started using modems manufactured by Intel last year, it gave the company leeway to be more aggressive.

“What prompted us to bring the case now as opposed to five years ago is simple,” Sewell says. “It’s the availability of a second source.”

Apple’s underlying argument is that it shouldn’t have to pay a royalty based on the price the customer pays for the overall iPhone, when Qualcomm’s contribution is related to just one component (the modem) that makes up the device.

For instance, under the current agreement Apple has to pay more money to Qualcomm for higher capacity iPhones (which Apple charges users >$100 for each increment) even though the technical differences have nothing to do with the cellular system at all. For a few years, Qualcomm paid Apple large rebates to make the effective price Apple paid lower than 5% of iPhone ASP. Those rebates have ended now that Apple has taken Qualcomm to court.

Apple has proposed that it should pay patent royalties based on the price of the modem rather than than the price of the phone. In the interview, Sewell says Apple shouldn’t have to pay more than $4 per device, which is a significant reduction compared to what it paid Qualcomm even after the rebates. Naturally, Qualcomm is unhappy with this arrangement.

Apple has told its suppliers not to pay Qualcomm any royalties until the legal situation is resolved. In the piece, Qualcomm CEO Steve Mollenkopf says that he expects Apple to settle soon. Sewell refutes this and says ‘there’s no way this case settles, absent a complete reinvention of the licensing model that Qualcomm has adapted in the industry’.

One of the big takeaways from the article is that Apple (unsurprisingly) downplays the role of Qualcomm in creating the iPhone experience whilst Qualcomm has a lot of pride in just how extensive its patent portfolio is.

Qualcomm positions itself as being an essential piece of the modem phone with. At its headquarters, it has a patent wall featuring its ‘flagship’ patent on the CDMA specification, as well as many patents covering critical parts of how phones work.

“What’s the first thing you do when you land on a flight? You turn off the airplane mode,” he says with a grin. “By the way, we invented airplane mode. That patent’s out in the lobby.”

It certainly doesn’t seem like the two sides are close to a deal at this stage. The legal battle will no doubt last many years. Read the full report over at Bloomberg.