A look back at a decade of the iPhone making some companies rich, bankrupting others 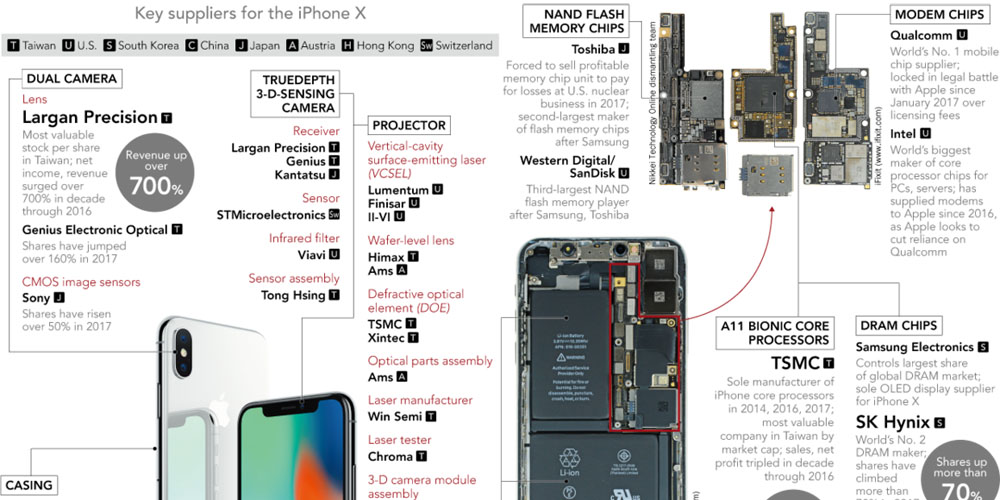 The Nikkei Asian Review has an interesting piece looking back at the impact of a decade of iPhone production, examining how it made some companies rich, some considerably poorer – and even bankrupted one major supplier.

Foxconn is, it says, the obvious success story, but not the only one.

In 2006, Hon Hai Precision Industry was about to take on a major role in an epochal shift in consumer electronics, though few of the Taiwanese company’s employees could have imagined what was about to hit them […]

Over the next decade, the iPhone would help push Foxconn’s revenue from $38 billion to $145 billion and turn it into one of the world’s largest employers …

But other companies have been hurt by the iPhone, it says.

The iPhone’s integration of multiple features, including a camera, a music player and gaming, also devastated companies that made feature phones, gaming consoles and stand-alone cameras. Japanese electronics giants including Sony, Nintendo, Toshiba, Canon and Nikon got kneecapped — though Sony now supplies sensors for the iPhone’s camera.

Winning a large Apple contract can also be a risky business, with one huge Taiwanese supplier going out of business as a result.

Wintek, a former Taiwanese touch module supplier for iPhones, filed for bankruptcy in 2014 after embarking on a costly expansion just before Apple stopped using its technology. Having once generated more than NT$100 billion ($3.3 billion) in annual revenue, Wintek was forced to transfer its technologies to Chinese rival O-film Tech, abandon its facilities, lay off some 40,000 employees and finally delist in 2015. More than 1,700 suppliers to Wintek were also affected.

As Imagination Tech and others have learned, a lot of business can disappear overnight if Apple switches tack.

“Supplying to Apple means you need to invest a lot in advance for new technologies and new equipment but you do not know whether you could find other customers to use that technology or production capacity once Apple ditches your technology or shifts orders to your rivals,” IDC analyst Sean Kao said.

Some suppliers are even concerned about the future of the smartphone business as a whole, with worldwide growth predicted to remain in the 3-4% range through to 2021, and perhaps that only for a limited time.

“Industries will change. We won’t stay in the smartphone age forever,” Tung Tzu-hsien, chairman of contract manufacturer Pegatron, told reporters in December. “The smartphone has enjoyed a boom for over 10 years. Many people ask me whether it will decline like notebooks.”

One interesting take-out is that Chinese suppliers have more than doubled under Tim Cook’s leadership. Though perhaps no surprise, given Cook’s reputation for efficient supply-chain management: the more suppliers you can concentrate in one place, the greater the efficiency and reliability of supply.

Check out the full piece for a lot more detail on the impact of Apple’s suppliers.