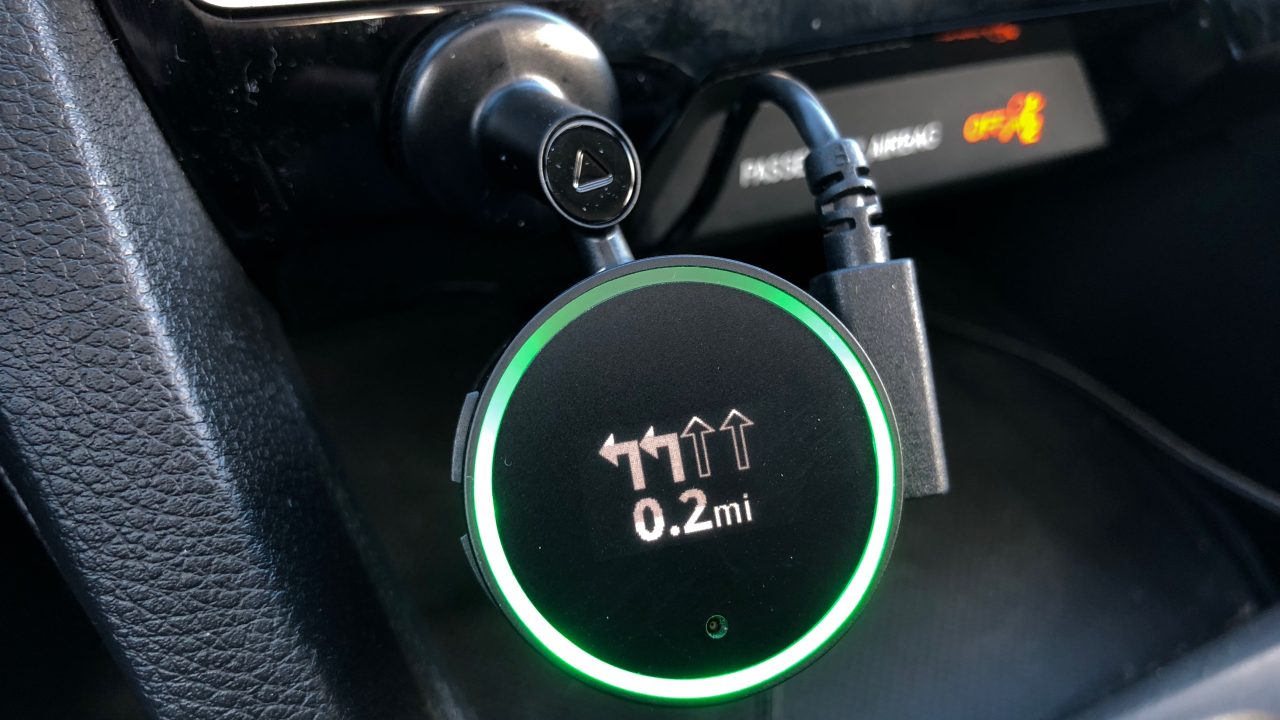 In the run-up to the HomePod’s delayed release, I’ve been experimenting heavily with Amazon Alexa in various forms. While Alexa is most present at home where I’ve placed Echo Dots throughout my house for controlling lights, I’ve also tried Alexa in the car using Garmin Speak which is a dash-mounted GPS with Amazon’s voice assistant built-in.

I’ll cut to the chase with this one. Garmin Speak isn’t for me as I prefer Apple’s CarPlay, but it does have a few interesting features that make it worth considering for Alexa fans.

If you rely on your iPhone for GPS and want a simple dash-mounted display, Garmin Speak is a handy and compact navigation solution. It features a small screen that displays navigation cues like your next turn direction and distance, and Garmin Speak even displays lane guidance which Apple Maps only added with iOS 11.

Navigation is controlled by voice search which is powered by Amazon Alexa. Using the Garmin Speak app on your iPhone, you can pre-set addresses like home, work, and school, then ask Alexa to give you directions to those locations when you’re driving. Garmin Speak also lets you use Alexa to start navigation to nearby gas stations or specific locations at your request.

Garmin Speak also includes voice navigation as its name suggests, although you’ll hear a different voice for directions then you’ll hear for everything else. The unit isn’t a dedicated GPS, however, as it requires your iPhone and uses cellular to work.

While the unit itself is powered by your car, the connection between Garmin Speak and your iPhone is wireless over Bluetooth, so there’s nothing to connect and disconnect each time you go for a drive. Compare that to Apple CarPlay which requires the Lightning cable to work except in new BMWs and one aftermarket head unit. You can optionally use the included AUX port if needed for a wired audio connection to your car stereo while the unit connects to your iPhone over Bluetooth.

Garmin Speak isn’t totally natural though. Because Alexa is using the Garmin Speak skill to work with the product, you have to say “Alexa ask Garmin for directions” each time you use it for navigation. Ideally, you could just say, “Alexa, take me home.”

For other Alexa-controlled tasks, the voice assistant performance is mixed. Alexa can deliver you a news briefing and control smart home accessories from the car which is nice, but music streaming support is limited to Amazon Music, Pandora, and Sirius XM. Want to stream Spotify with Alexa? Support is expected in the future, but it’s not available as of the time of this writing.

Perhaps my favorite thing about Garmin Speak is the ability to order products with Amazon Prime from the car. I actually used this a few times in testing, including ordering basic band-aids and Paw Patrol-themed band-aids using voice in the car. Both products just showed up at my front door a day and a half later.

Garmin Speak is powered by your car’s 12 V receptacle and includes a generously long power cable so it can be mounted on your windshield even if the power receptacle is far away, but that means you’ll likely want to practice some good cable management with the excess cord to avoid a distraction.

Ultimately, my least favorite part of the experience — Alexa-limitations aside — is needing to launch the Garmin Speak app occasionally while driving. That’s a deal breaker for me when music or podcasts from another audio app is playing, and it was a limit I hit regularly in testing. It’s just not practical or safe to need to launch the iPhone app once you’ve started driving, but that’s a limitation of being an add-on accessory and not integrated with the iPhone’s system.

If you’re still determined to add Alexa to your driving experience, Garmin Speak is a mostly practical solution although the $119 (reg. $149) is admittedly a bit high considering its limitations.

The unit includes a built-in speaker for use when no other speakers are available, but I imagine Garmin could shave off a little cost if it omitted that part of the hardware. Instead, Garmin has gone up market with a newly unveiled $199 (reg. 229) version called Garmin Speak Plus that includes a dash cam.

For now, Garmin Speak is the easiest way to use Alexa in the car, but that will change once Alexa becomes integrated with cars in the coming months.