This morning OpenSignal has published its annual report on the four major U.S. carriers. In 2017, the two largest U.S carriers, AT&T and Verizon, unleashed their unlimited data plans, which means all four major carriers now offer an unlimited data plan in some form. But the major two networks are seeing some challenges.

The report states that AT&T and Verizon’s data speeds dropped dramatically since offering unlimited. “Their 4G speeds began steadily falling in our measurements as their networks faced the increased data consumption.” However, OpenSignal says that Verizon was able to recoup their losses.

The biggest surprise this year is with T-Mobile. The Un-Carrier was able to capture five of the six awards given by OpenSignal. It won awards for 3G and 4G download speeds, 4G availability, 3G latency, and overall download speeds, based on their testing.

The one notable category missing by their testing is coverage. All tests were done where coverage was available for each carrier. 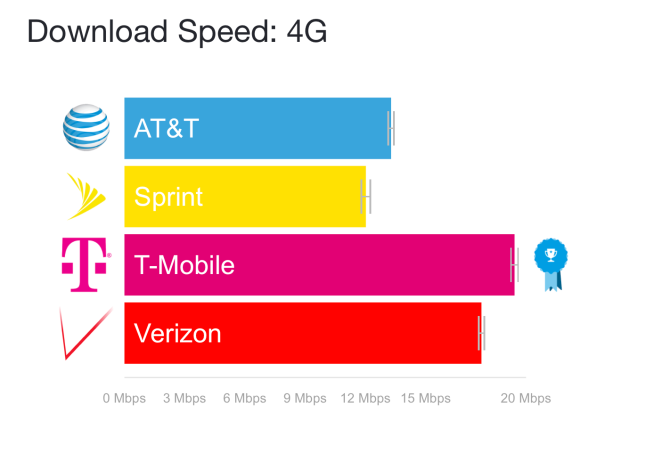 And in last place is Sprint, which didn’t win any awards. While the carrier has a long way to go, it has been able to improve its 4G download speeds and availability from 3Mbps to 12Mbps. This still leaves a big gap between the other three, which have download speeds ranging between 13.2 and 19.4 Mbps on average.

In unrelated news, AT&T Home today announced its new “AT&T Smart Wi-Fi Extender,” for $34.99 which is an AT&T branded Wi-Fi router that prioritizes Wi-Fi calling on the AT&T network.