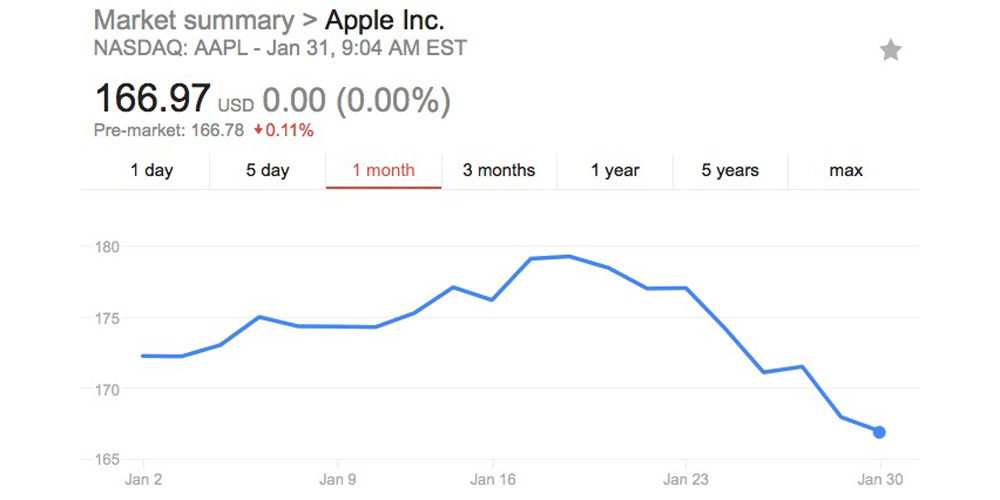 More analysts are joining the queue to pour cold water on AAPL’s Q2 prospects, following yesterday’s report that Apple is expected to offer modest guidance for the quarter. A Reuters report said then that analysts now expect guidance of around $60B, down from earlier estimates of $67B.

A fresh roundup today notes that AAPL stock has lost around 6% of its value in the last two weeks, and cites more analysts expressing concern about the current quarter …

Business Insider reports that although Wall Street expects Apple to beat its top-end guidance for fiscal Q1 (calendar Q4 2017), with predicted year-on-year growth of around 11%, there is considerable pessimism about the current quarter. This has in part been driven by Nikkei and WSJ reports that Apple is cutting its iPhone X production in half this quarter.

Deutsche Bank kicked off the quotes.

Recent datapoints on iPhone sales continue to point to weaker-than-expected demand for the new iPhone models.

Our argument has been that the phones were too expensive to drive massive adoption, consumers are keeping their phones longer because of their high cost, the market is now only a refresh market, and the iPhone X features weren’t enough to drive non-early adopters to buy new phone

In our model, we have hardware revenues flat post iPhone X.

We don’t think fiscal 2018 will be a ‘supercycle’ year given unit growth of about 10% dependent on China.

This echoes a KGI note that the ‘real super cycle’ won’t happen until this year’s iPhones go on sale.

The Wall Street consensus is for Apple to report Q1 sales of 80.2M iPhones, with above-guidance revenue based in part on growing services income.