Tim Cook mingles with lawmakers on Capitol Hill during visit to Washington D.C. 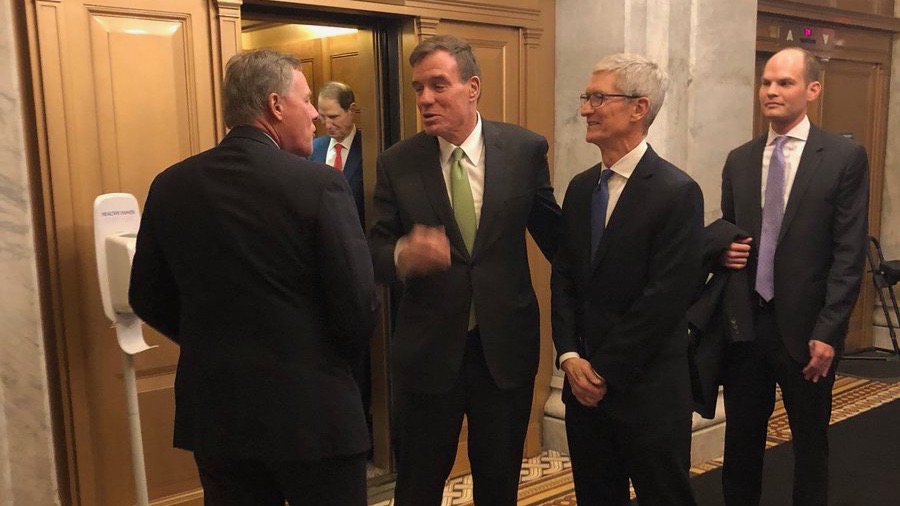 CNBC reports that Cook had lunch with Warner while visiting Capitol Hill. At this point, both Warner’s office and Apple have been quiet as to the topics of discussion. It’s unclear if Cook also spent any time with Burr, the vice chairman of the Senate Intelligence Committee, aside from the brushing of elbows seen in the above image.

Warner, a democrat representing Virginia, is well-versed in the technology industry. While Apple was in the midst of its battle with the FBI over unlocking the San Bernardino iPhone in 2016, Warner announced a bill that aimed to prevent such feuding between tech companies and lawmakers by creating a congressional commission to address digital privacy issues.

This proposal was one that Cook seemingly agreed with, writing the following in a memo to employees in 2016:

“We feel the best way forward would be for the government to withdraw its demands under the All Writs Act and, as some in Congress have proposed, form a commission or other panel of experts on intelligence, technology and civil liberties to discuss the implications for law enforcement, national security, privacy and personal freedoms.”

Tim Cook is no stranger on Capitol Hill and has previously met with lawmakers on both sides of the aisle, such as Orrin Hatch. This time last year, he also had dinner with Jared Kushner and Ivanka Trump.

SPOTTED in the US Capitol: Senate Intel Cmte Chair @SenatorBurr, @MarkWarner & Apple CEO @tim_cook (Warner is getting lunch with Cook in the Senate dining room): pic.twitter.com/VwtnE4EQGS