Final Cut Pro Diary: Working with 360-degree video is surprisingly easy and will be huge in future 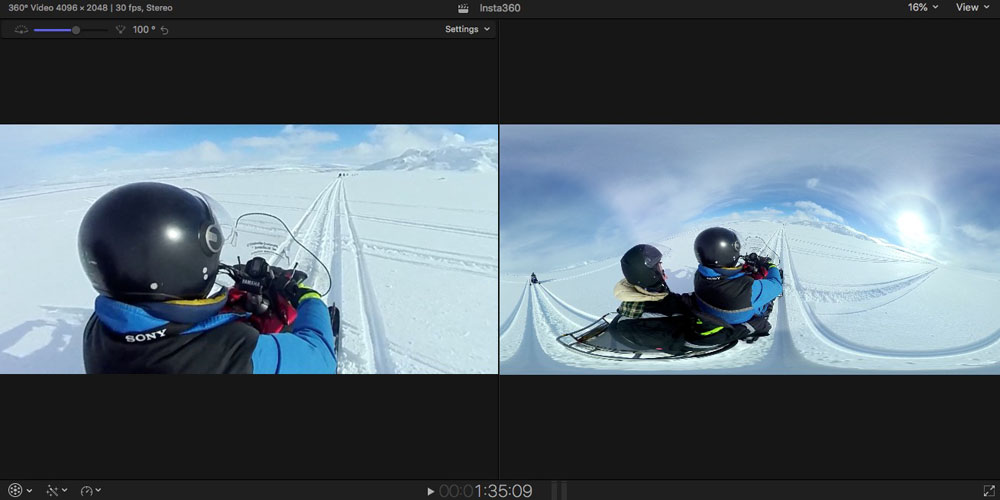 It’s been quite some time since my last Final Cut Pro Diary entry, and that’s not by chance. Despite my best intentions, I haven’t done that much video work of late.

That is set to change: I’m working on a small personal project that I’ll talk a little about below, but my most recent use has been editing footage from a 360-degree video camera to produce pseudo multi-camera footage …

I’d been looking for an excuse to play with 360-degree video, and a short trip to Iceland provided the perfect opportunity. In just three days, we got to visit a geyser, do some horse-riding and – most fun of all – go snowmobiling on a glacier.

I was using the Insta360 ONE camera. This really impressed me. Shooting footage is not even point-and-click: since it offers complete 360-degree coverage, and uses a 6-axis gyro to know how it is aligned, the ‘pointing’ bit doesn’t matter. Stick it on a selfie-stick, hold it up high and all is good. You can check out my review of the camera here.

Editing actual 360-degree footage is no different to editing any other footage, other than the fact that you have to get used to looking at the weird flattened view of spherical footage. That ability was added in version 10.4.

But there’s one other trick you can perform with 360-degree video: simulating multi-camera footage.

FCP X lets you choose a viewpoint from spherical footage, and then work with that as a flat, wide-angle clip. Chop up your 360-degree footage into sections, choose a different angle for each, and you have an extremely convincing simulation of footage shot with a whole array of cameras.

As I mentioned on my camera review, there is one big problem with doing this with today’s consumer 360-degree cameras:

In this way, you could, in theory, shoot with a single camera and then choose your angles afterwards: front-facing, rear-facing, straight down and so on.

I say ‘in theory’ because even 4K is limited resolution to work with when you’re selecting what is a relatively small crop from the 360-degree image. This means you can’t get 1080p crops out of the 4K file, so the final result is rather low resolution.

You can see this in my sample video (best viewed on desktop, as it remains a 360 video, so you can easily change all my angles when viewing on mobile):

But what you can also see is the massive potential the approach has. Once we have cameras with enough resolution to allow 1080p flat crops, creating multi-viewpoint videos will become massively simpler – not least because you won’t be locked into fixed viewpoints. If you’ve ever shot a clip and later wished you’d angled it slightly differently, that’s a problem you’ll never have with a 360-degree camera: you can choose the exact angle you want in post.

Of course, the resolution issue won’t ever go away. Right now, 1080p is still the default resolution for most video, with 4K output still seen as something noteworthy. Once people come to expect 4K output, then we’ll need much higher resolution in a 360-camera to provide 4K crops.

Creating a multi-angle video like this turned out to be very simple.

When creating a new project, change the video format from your normal 1080p or 4K to 360°. Set the resolution and frame-rate as usual, then make sure the Projection Type is set to Monoscopic not Stereoscopic:

When you import your 360-degree footage, click the clip display icon (to the right of All Clips) to toggle it to List View, then scroll across to the right. Make sure your clip property is Equirectangular and Monoscopic:

Make sure that the View option, top right, is set to 360° Viewer:

You can then drag your clips into the timeline in the usual way, cut them up as desired and then choose the viewpoint for each clip.

You do this by selecting from the tool menu bottom-left of the viewer. Because FCP X recognizes it as 360-degree footage, an extra option will appear. In addition to the usual Transform, Crop and Distort, there’s another option at the top: Reorient.

Simply click in the right-hand (input) view, then drag up, down, left and right to select your desired view – as shown in the left-hand (output) view.

You can also zoom in an out by rescaling. This is done using the slider above the left-hand view:

However, there are a couple of things to note here. If you zoom in, then you’ll reduce the resolution even further. If you zoom out, you’ll start to get a distorted view, with a curved horizon. I stuck to 100% throughout.

Once you’re ready to share your footage, click on the Settings tab and make sure the resolution matches your camera settings and the Projection Type is Equirectangular. In FCP X 10.4, that’s the only option, so not something we have to worry about for now, but it looks like the app will be offering other options later.

And that’s all there is to it! In my snowmobile clip, I was able to switch between front-facing, rear-facing, sideways and overhead views (the camera was on a selfie-stick held vertically). The low resolution is really the only clue that it wasn’t shot with multiple cameras.

This wasn’t the first time I’ve simulated multi-camera footage. The first time I did it was for a Smart Home Diary piece on iPhone-controlled blinds.

A mix of viewpoints makes footage more visually interesting, but rather than set up multiple cameras, I just shot the same thing from several different angles and then edited them together. You can see a brief clip below:

The only trick to this is making your cuts at the same point, so that it looks seamless. You can see the full video in the piece.

There’s a Catch-22 with video. When you don’t have much experience, creating even a short video takes forever. But the only way to speed up the process is to gain experience.

So far, I haven’t created much video for 9to5Mac because Jeff sets such a high benchmark with his that it always feels impossible to create something even 10% as good in the time I have available. But since the only way this will ever change is to get more practice, I’m working on a just-for-fun personal project.

I ride a Brompton folding bicycle. In the almost two decades I’ve been riding them, they have gone from an eccentric choice to the Default London Bike. I’m creating a mock David Attenborough documentary, viewing them as creatures roaming across the London plains, roping in a bunch of Brompton-owning friends to help out.

It’ll just be a short piece, around four minutes long, but I’m viewing it as an opportunity to really up my video game, creating a detailed plan before shooting.

It’s just a piece of fun, but my aim is to extract the maximum possible learning value from it. The main challenge at the moment is the weather. First we had snow (rare in London), now we have lots of rain and overcast skies. Since it’s an upbeat piece, I really want blue skies for it, and those have so far proved rather elusive!

As always, these diary pieces are intended to share my own experiences rather than act as tutorials, so if you have any tips, or can see more efficient ways to do things, do please let me know in the comments.