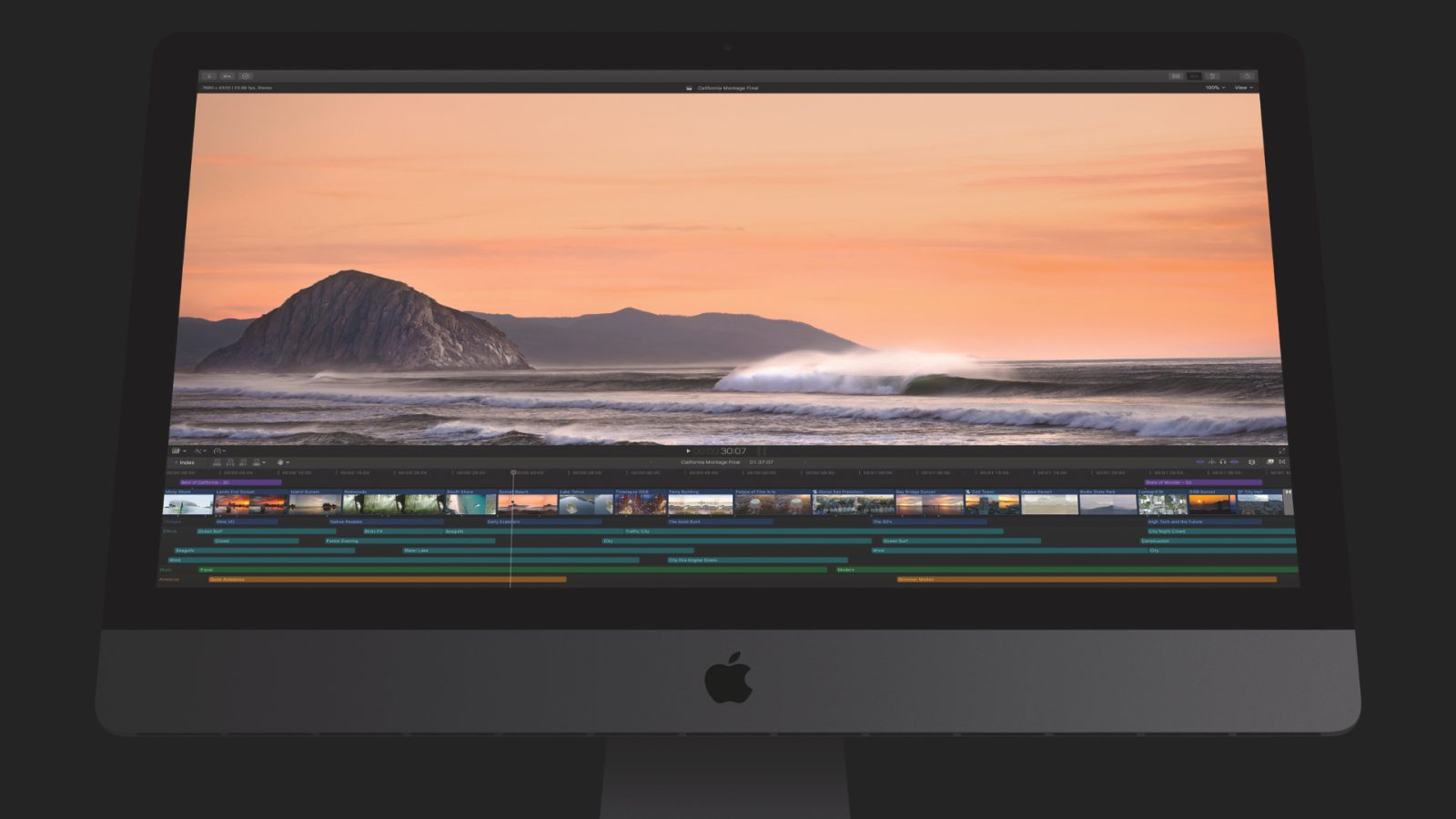 It was a mere four months ago when Final Cut Pro X received a major update in the form of version 10.4. That update ushered in exciting new features like 360 VR, advanced color grading, HDR support, and more.

As is usually the case, the update will be accompanied by updates to companion tools Compressor and Motion. What all can you expect from Monday’s Final Cut Pro 10.4.1 release? Have a look as we break down details related to each change.

Final Cut Pro 10.4.1 includes a complete set of tools for creating, editing, and delivering closed captions. You can view your captions right in the viewer and export them as part of your video or separately as a standalone file.

Not only will closed caption workflows built into Final Cut Pro X be an amazing win for accessibility, but in a world that’s increasingly video-centric, it’s not always possible or practical to listen to what’s being said in a video. With this in mind, I feel like closed caption support in videos uploaded to YouTube and other services will see a significant uptick thanks to these tools. 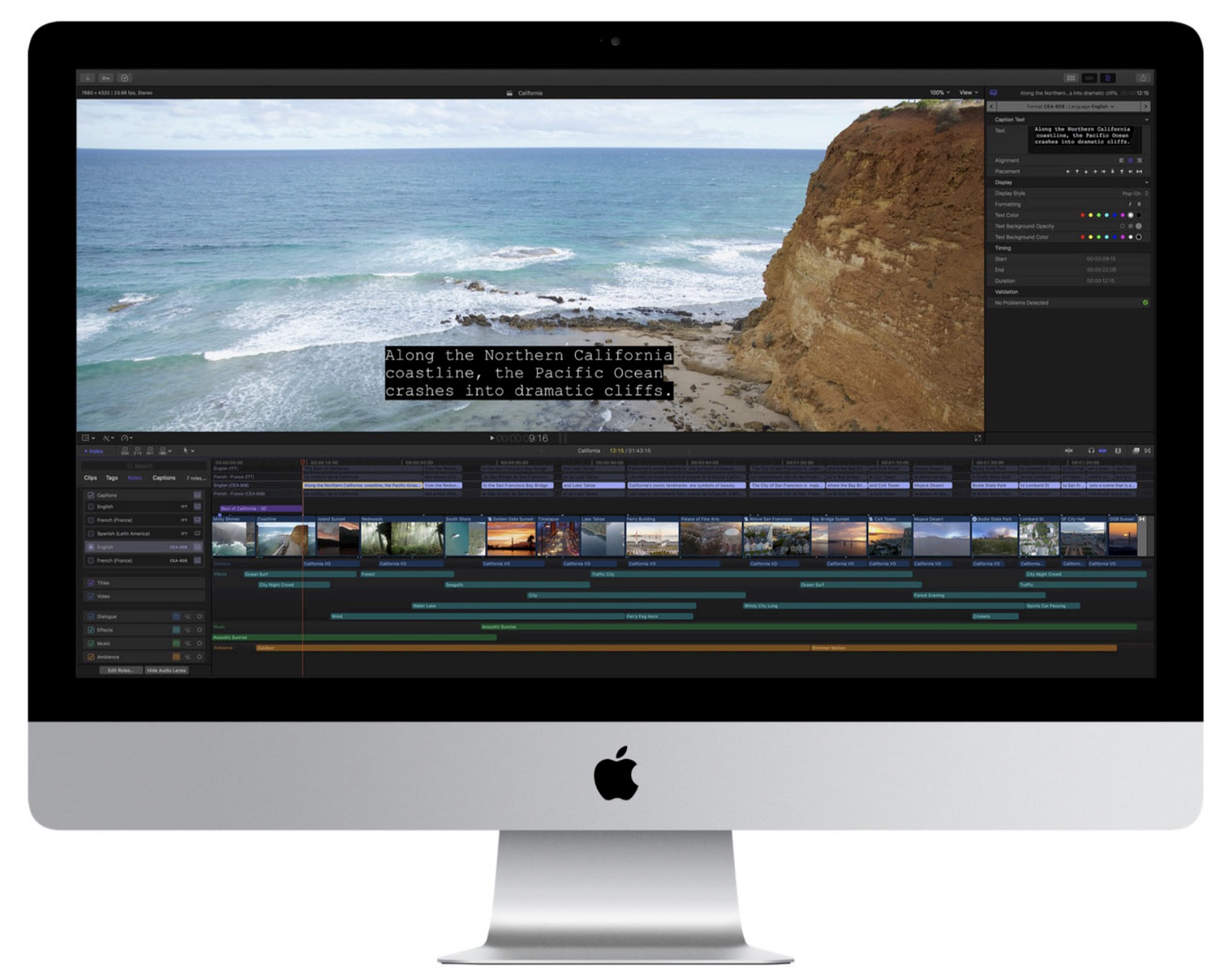 Users will be able to import already exiting caption files into a project and Final Cut Pro will automatically connect each caption in the timeline to its corresponding video (or audio) clip. You will also be able to create captions from scratch in multiple formats and languages, and view those captions in real-time in the viewer. 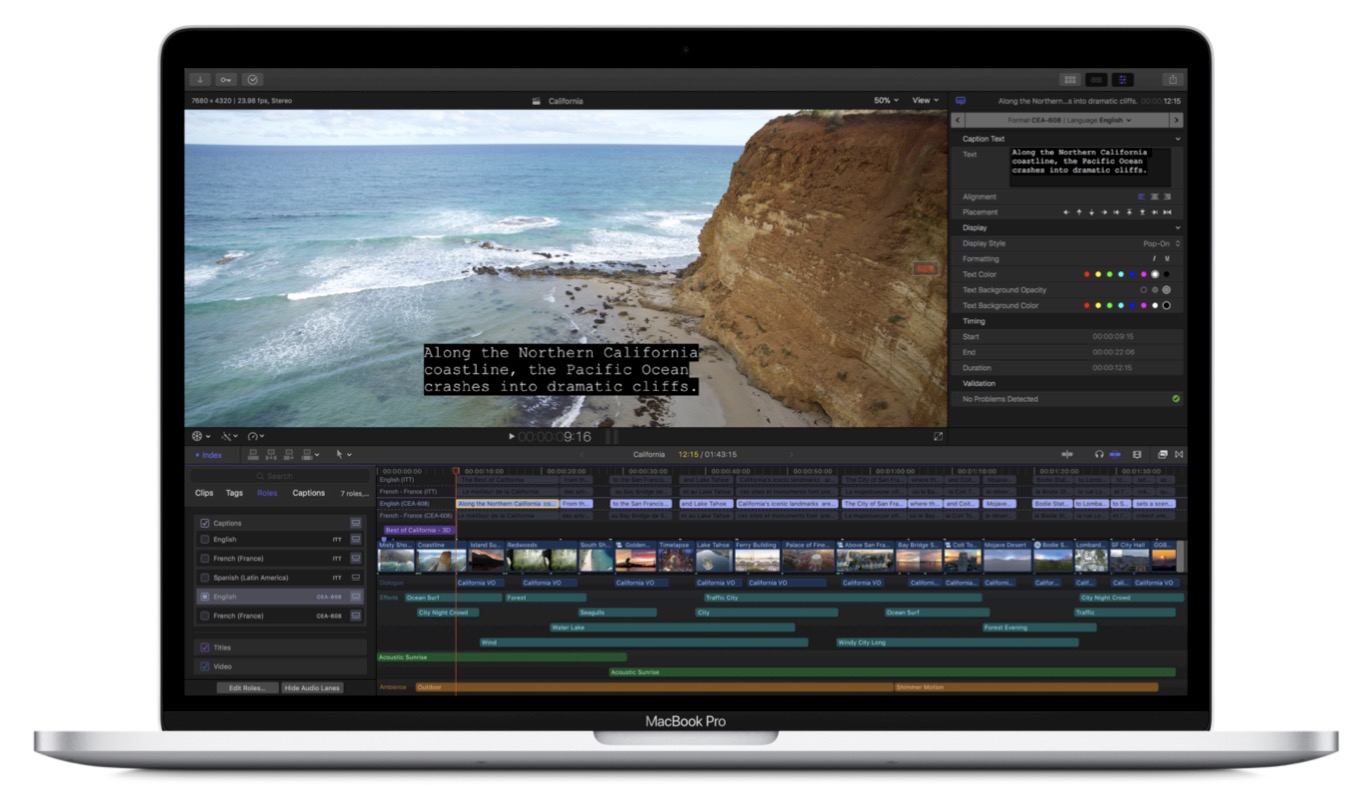 Since captions are connected to audio and video clips in the timeline, they will move along with their connected clips as you organize your work. A new dedicated captions inspector will allow users to change text, color, location, and timing. 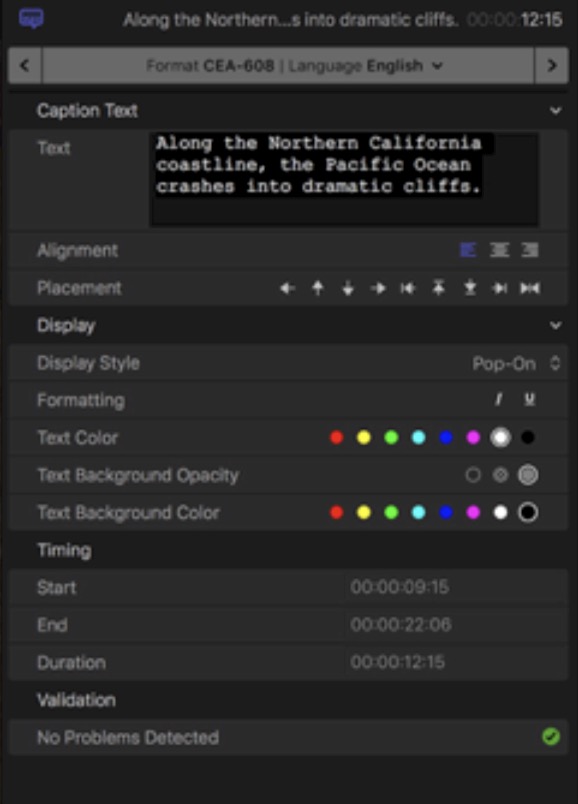 You’ll also find a new updated Timeline Index, one of my favorite overall Final Cut Pro X features. The updated Index will let you search and select captions, or use roles to instantly switch between different versions of captions. 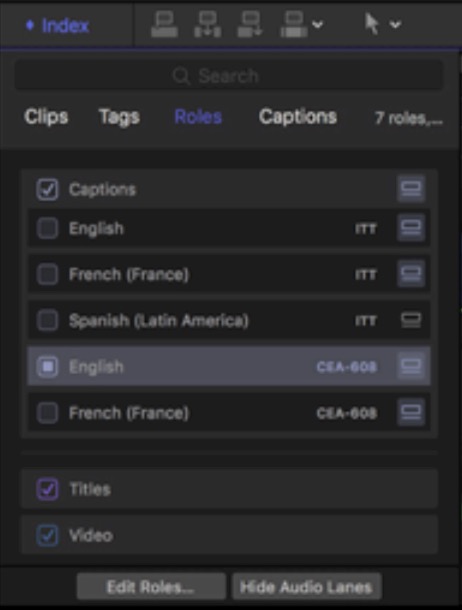 The great thing about closed caption support in Final Cut Pro X is that it’s a true end-to-end workflow. You can easily create, edit, and deliver captions directly within the app without round-triping from a third-party tool. As someone who has long aspired to use closed captions more often in my videos, the presence of these new tools in Final Cut Pro X is genuinely exciting. 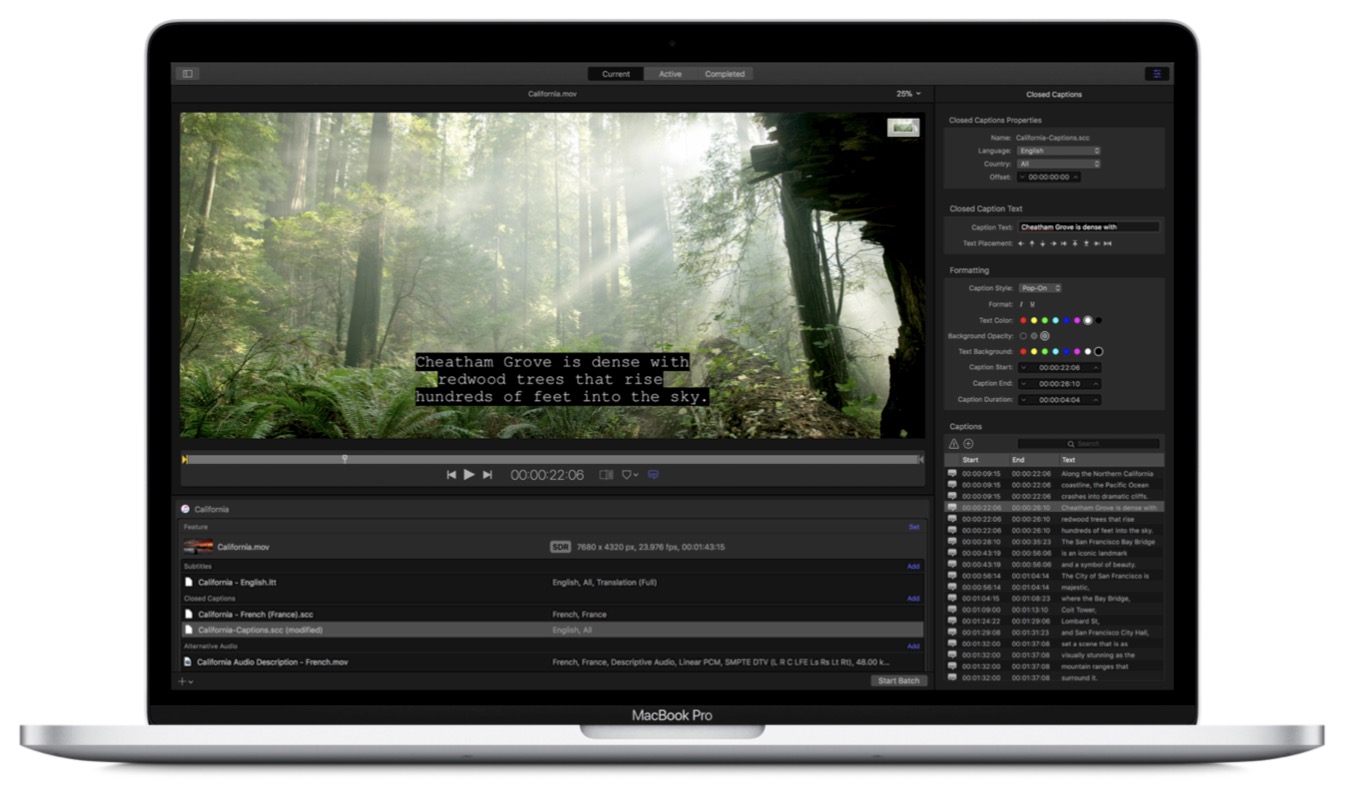 Compressor ($49.99 on the App Store) has also been updated to version 4.4.1 and includes full support for creating, editing and delivering closed captions. Users can import caption files for inclusion in a batch export or iTunes Store package. Users can also create captions right in compressor via the captions inspector, bypassing the need for expensive third-party software normally dedicated to this task. 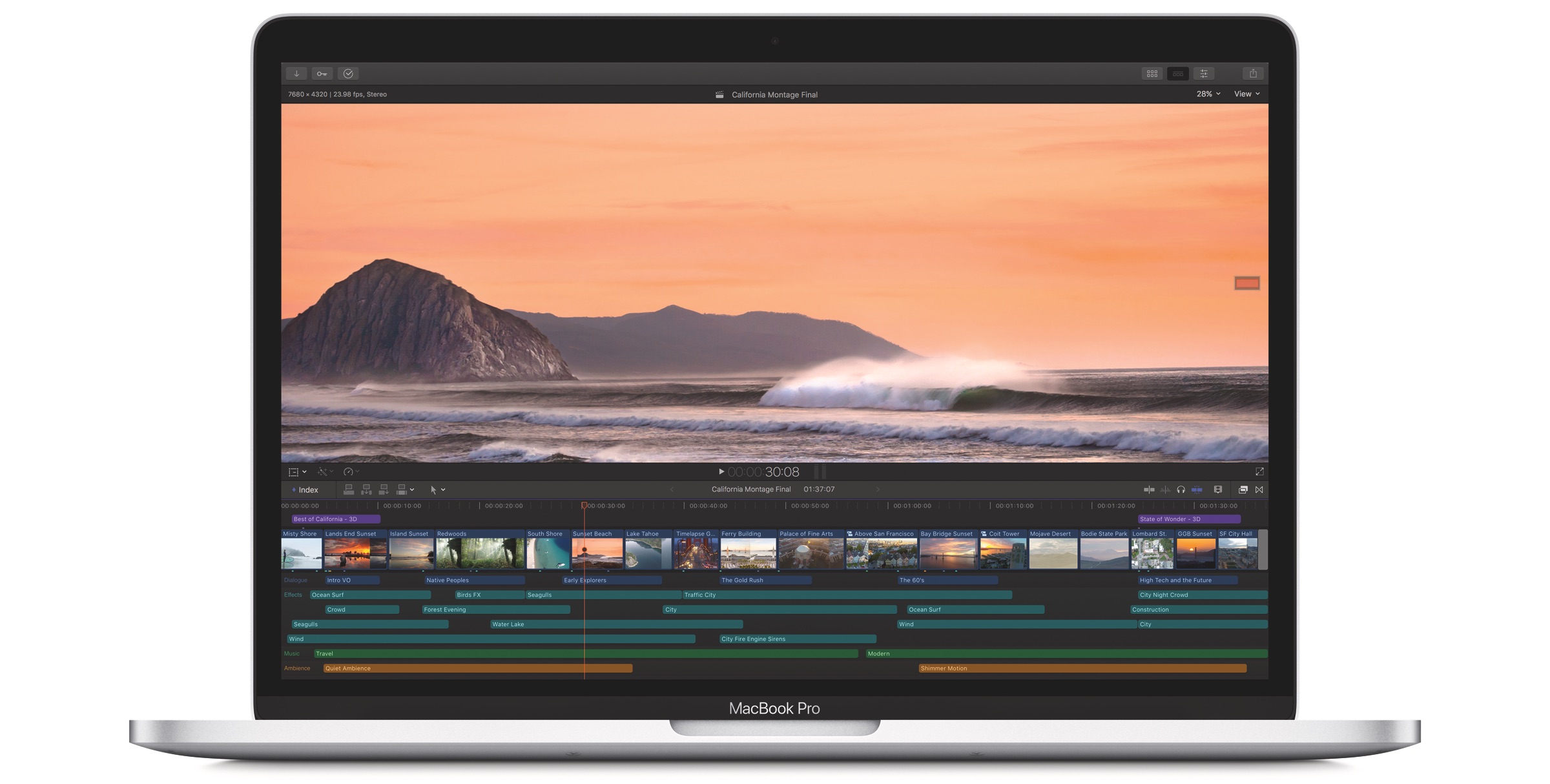 Both ProRes RAW and its HQ variant have the wiggle room to capture data at higher rates based on image detail and sensor noise. Compare the data rates below for an illustration of the flexibility of ProRes RAW. 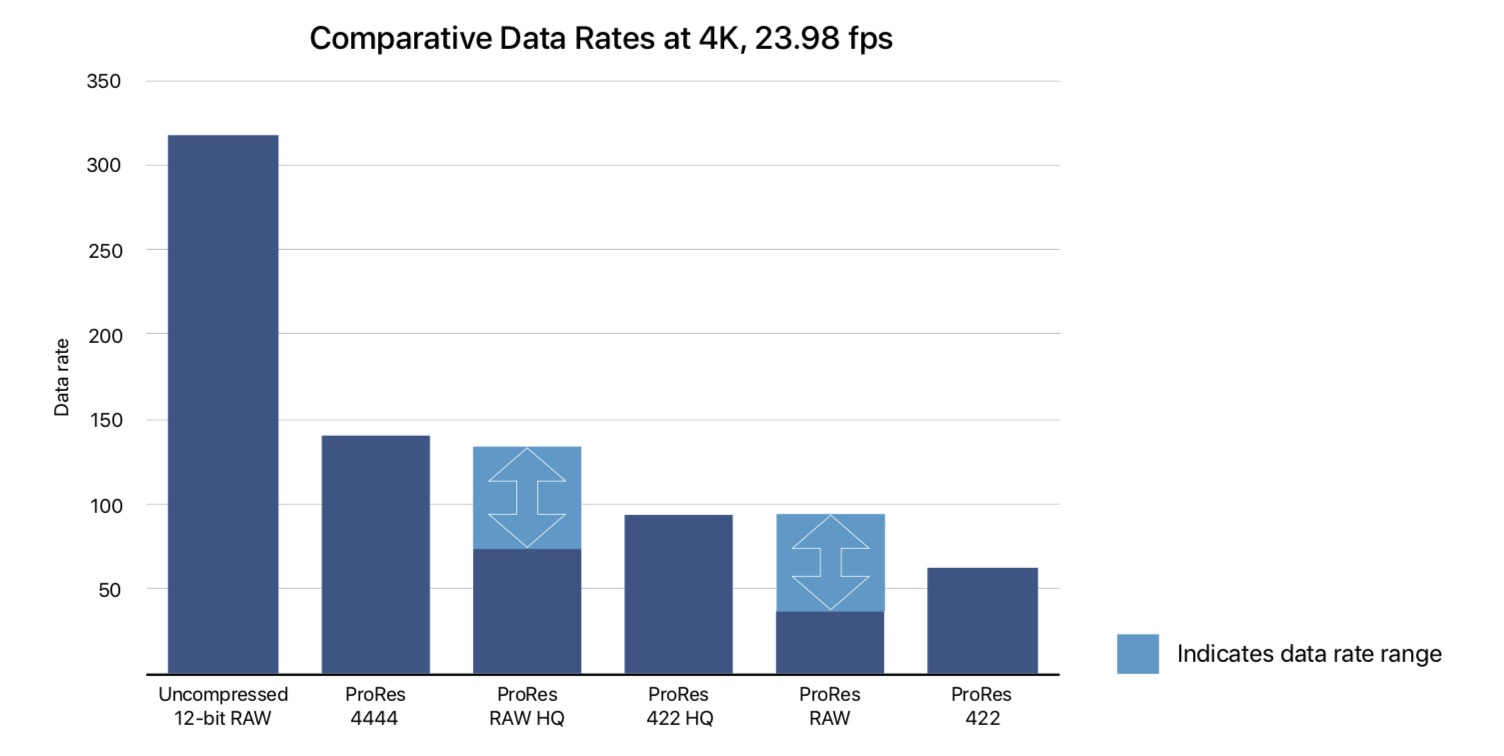 So you’re probably wondering to yourself…how do you record in ProRes RAW or ProRes RAW HQ? Good question. Apple has teamed up with both Atomos and DJI as official ProRes RAW partners.

Later this spring, the DJI Zenmuse X7 camera (read more about the Zenmuse X7 on our sister site DroneDJ) and Inspire 2 drone will gain the ability to record aerial footage in ProRes RAW or its HQ variant. Support will become available as a part of the RAW activation package for Inspire 2. 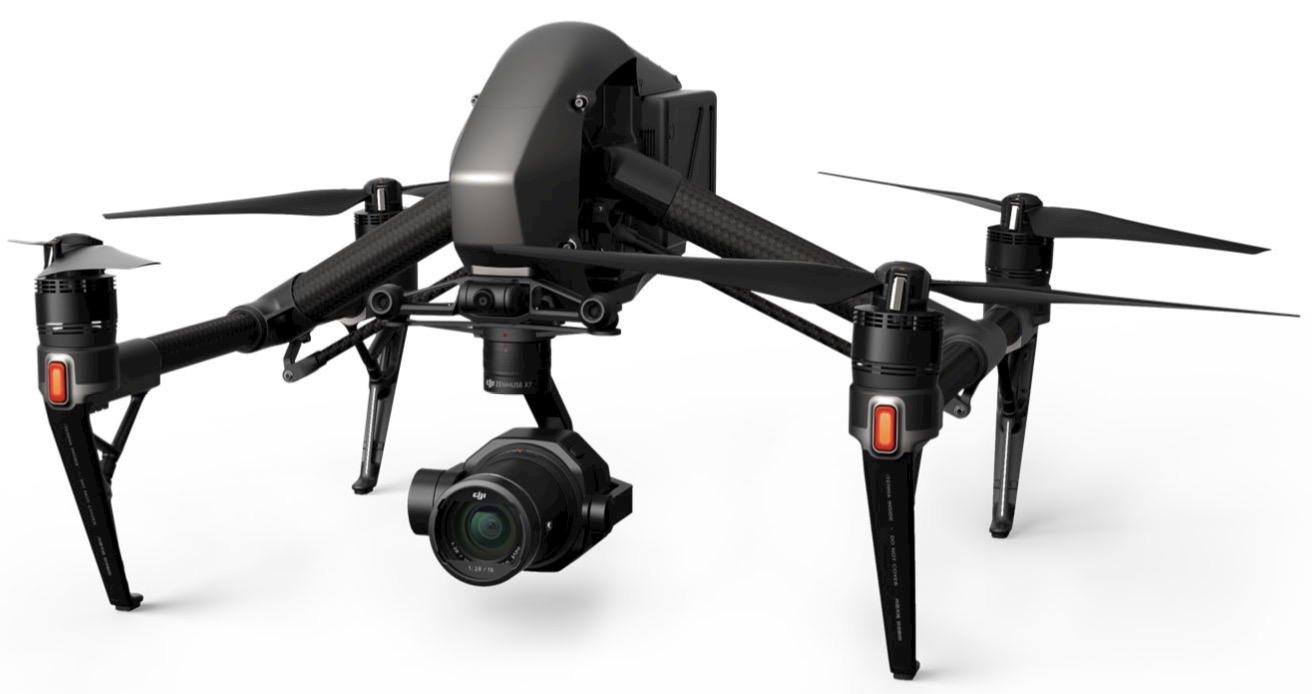 Atomos has been a long time ProRes partner, so it’s only right that an Atomos product is among the first to gain support for ProRes RAW and ProRes RAW HQ. The Melbourne, Australia-based company’s Atomos Sumo 19 external monitor/recorder — a product that I use every day and raved about on 9to5Toys — and the smaller Shogun Inferno will both be able to record, monitor and playback ProRes RAW. Sumo 19 and Shogun Inferno customers will receive a free firmware update from Atomos including support for both new flavors of ProRes. 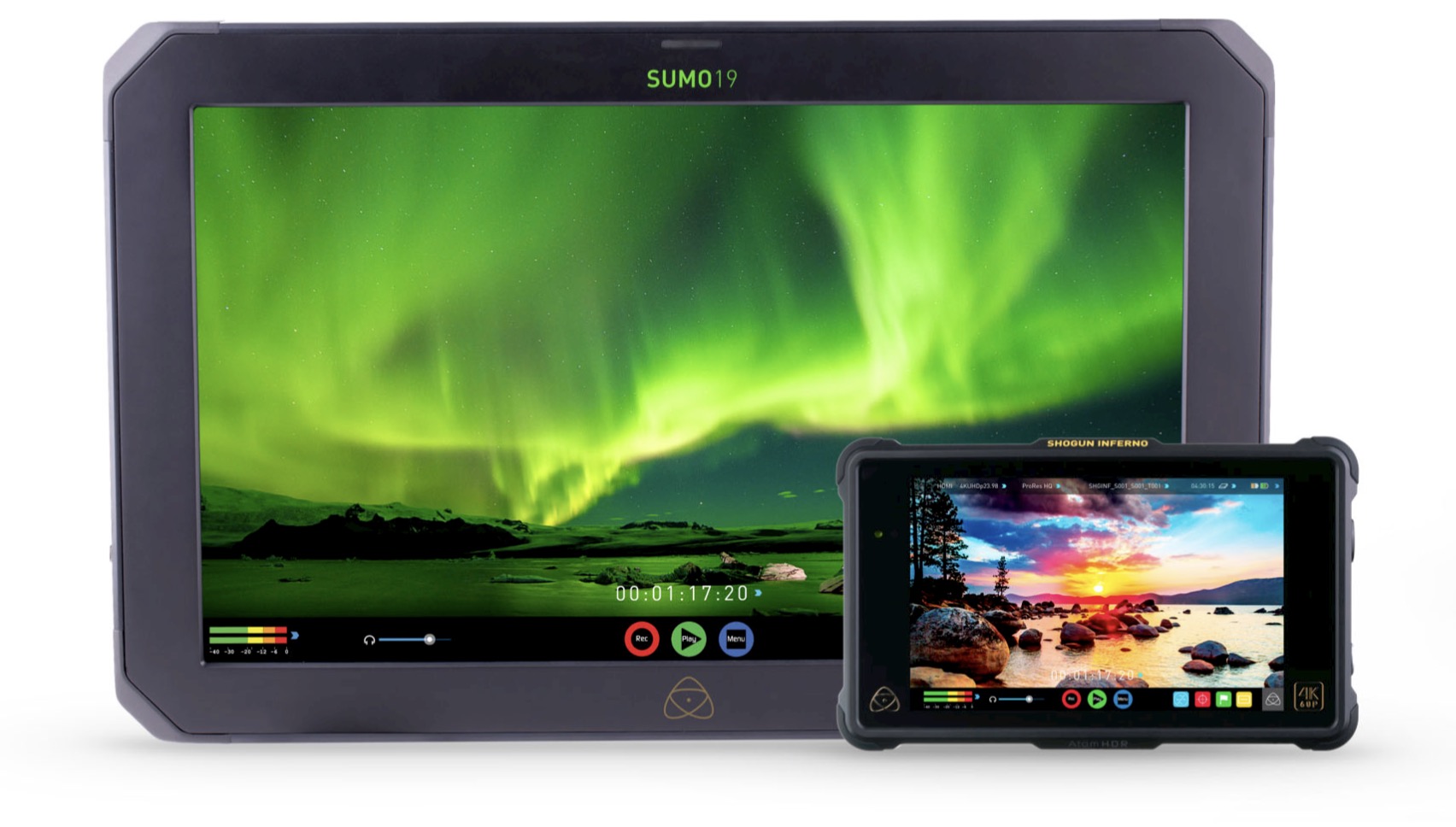 Although we expect the supported camera list to be firmly in the mid-tier range, don’t expect ProRes RAW support to be limited only to the super-high-end. Think Canon C300 range, which is around $10K. Again, certainly not cheap, but relatively affordable if you make your living doing films and documentary work. 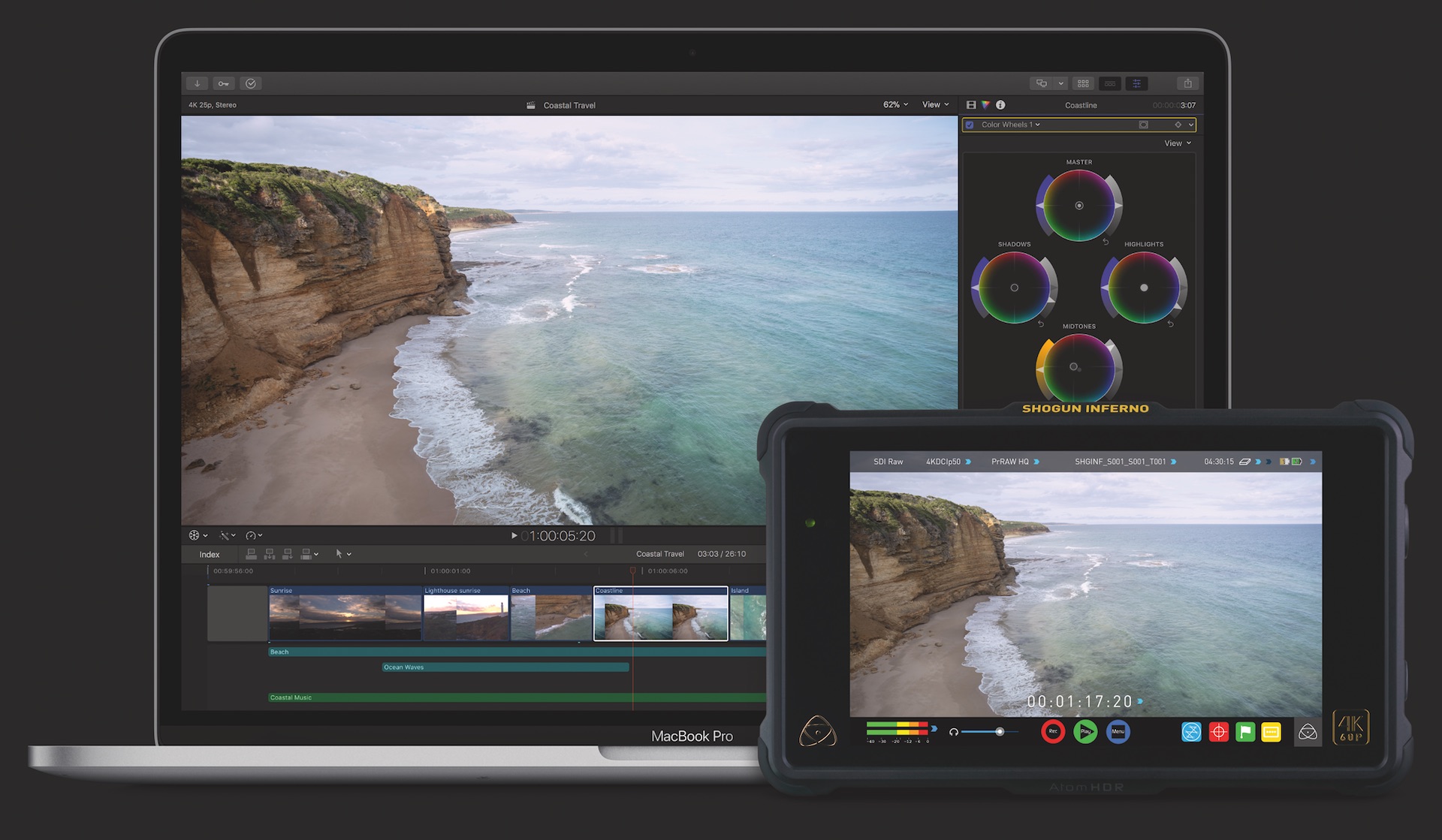 Atomos has updated its website with details on the exciting collaboration. It also included a hero shot of supported cameras, which include the Canon C300 and Panasonic EVA1 among others. 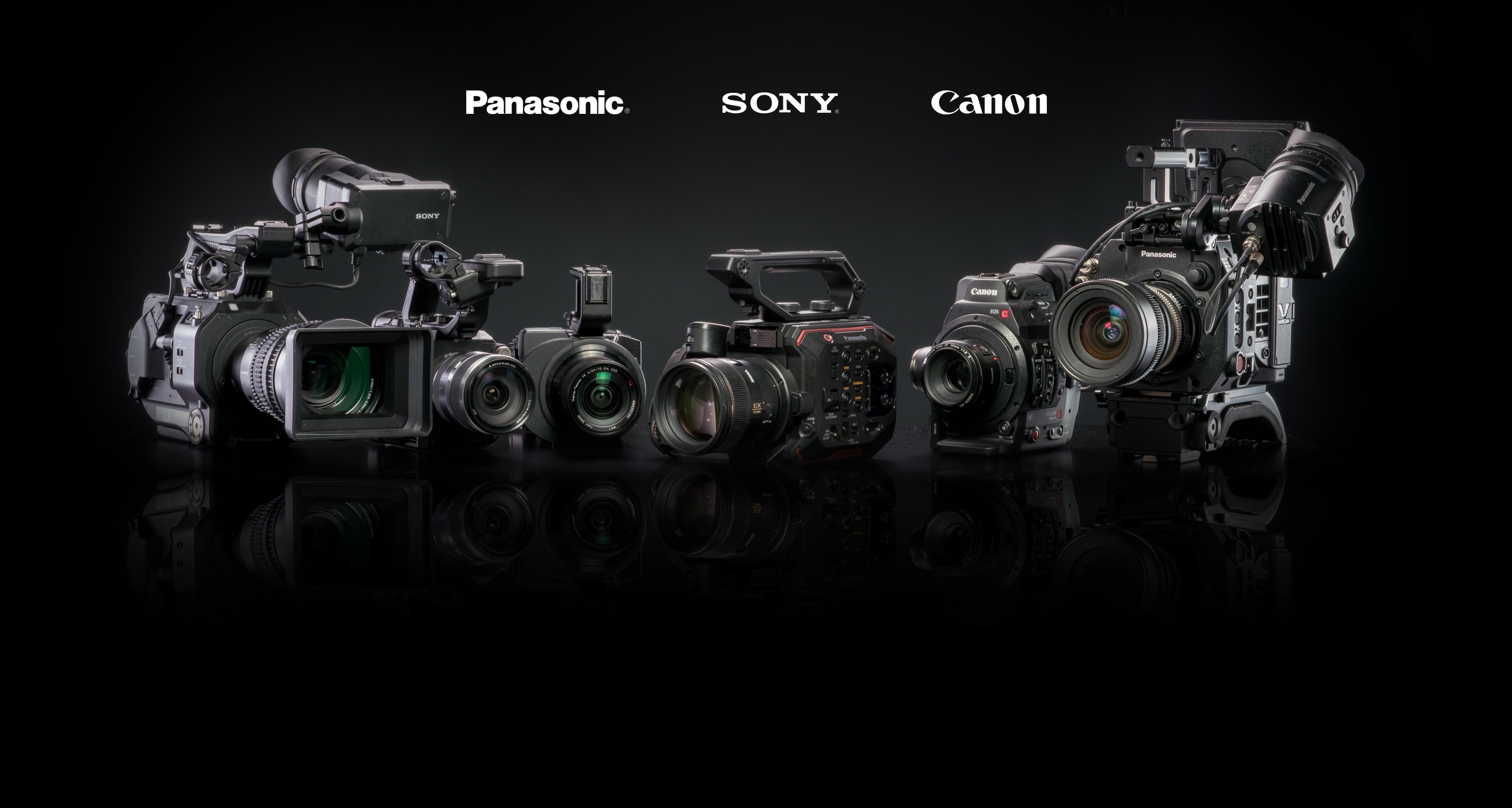 In Final Cut Pro 10.4.1 you’ll find enhanced export options made possible by a new Roles tab in the sharing pane. The Roles tab displays all roles in your project, which include titles, video, and audio.

The various enabled and disabled states from the timeline are automatically handed off to the sharing pane, but it’s easy to make changes as to which roles to include or exclude via a simple click of the box next to a specific role. 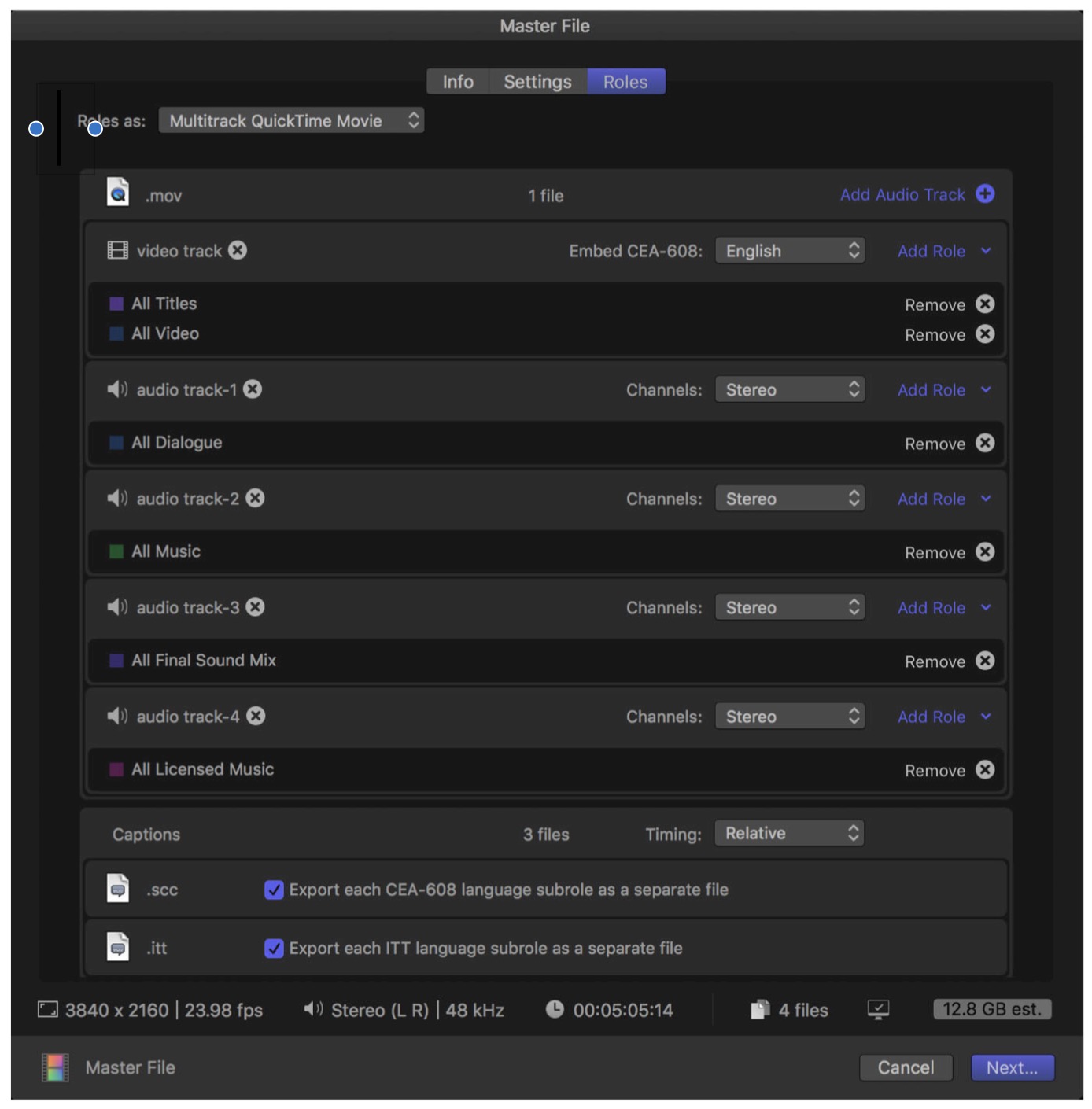 As expected, the new Roles tab also includes delivery options for Final Cut Pro’s new closed caption workflow. Users can select the caption language to include in the export, select to embed them in the video, or export as a caption sidecar file in iTT (iTunes Timed Text) and/or plain old CEA-608 format.

Apple continues to improve Final Cut Pro with impressive full-featured updates. It was just a few months ago when we received the biggest update in the history of the app, and now four months later we’re receiving another significant update.

As I’ve stated in the past, don’t be fooled by Apple’s version numbers, because I think they actually do the updates a disservice as far as optics go. Although this is a dot release, it contains two major new features in ProRes RAW and closed caption support that will highly benefit users who can take advantage of them.

Closed caption support, in particular, is important. Lessening the barrier to be more accessible is always a great thing, and with video being as prevalent as it is, the ability to easily create closed captions pays practical dividends that can reach all users.

People were quick to point and laugh when Apple decided to reboot Final Cut Pro back in 2011. Nearly seven years and 2.5 million seats later, there’s considerably less chuckling as Apple added more new seats on FCP X last year than in any year since its release in 2011.

I think the controversial decision to start over from scratch with Final Cut Pro X is looking like a wise choice in hindsight. It’s afforded Apple the flexibility to mold the application for modern hardware and workflows without being bogged down with a legacy code base.

As a result, Final Cut Pro X continues to receive significant upgrades year over year while remaining nimble and easy to use. And notably, if you purchased the app when it launched back in 2011, you haven’t paid a dime extra for any of those updates since.

Final Cut Pro 10.4.1 is a free update for existing users. New customers can purchase it directly from the Mac App Store for $299.