At today’s F8 developer conference from Facebook, the company is focusing on privacy along with  announcing some upcoming products like FaceTime competitors, a Tinder clone, and more.

In a post on the platform today, Mark Zuckerberg noted:

He notes that this is similar to clearing your cookies, cache and history, meaning that clearing your Facebook history will also force the platform to re-learn everything about you and your preferences.

To be clear, when you clear your cookies in your browser, it can make parts of your experience worse. You may have to sign back in to every website, and you may have to reconfigure things. The same will be true here. Your Facebook won’t be as good while it relearns your preferences.

However, Zuckerberg says that this is the right move as it allows users to remove any data they don’t want from Facebook. He cautions that this is their first move and that he will work hard in the future to perfect its stance on privacy.

This new option will let users toggle history on a per-app basis. 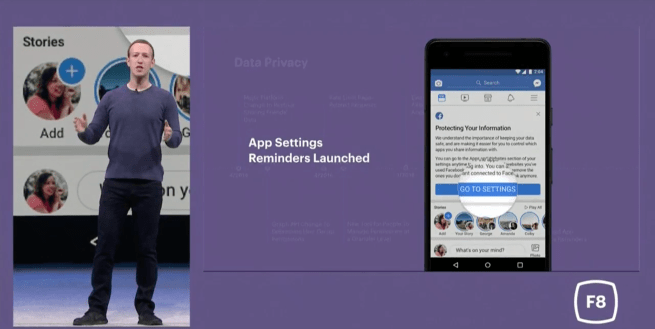 He also shared that in his interactions with Congress, he was not clear enough in his answers when asked about user privacy and data. While nothing is announced, he wants to discuss this further in the future.

Facebook says they didn’t do enough to protect the 2016 US elections. It says that it won’t “let this ever happen again.” The company is now requiring users to be verified via a government ID if they’re running a large political Facebook page or group.

Zuckerberg went on to talk about Fake News, stating that there are three pillars to addressing this issue. The first of which is spam. Spam is the traditional way of spreading misinformation. It leads to “sensational junk”, and is pretty easy to filter out. Second would be fake accounts. This is a new type that ultimately caught Facebook off guard, for example during the 2016 presidential elections. During this period, millions of fake accounts were created to spread misinformation and Facebook was too late on figuring this out. The third of which is a much tougher problem, “bad actors”. These are real people publishing hoaxes or intentionally passing around fake information. 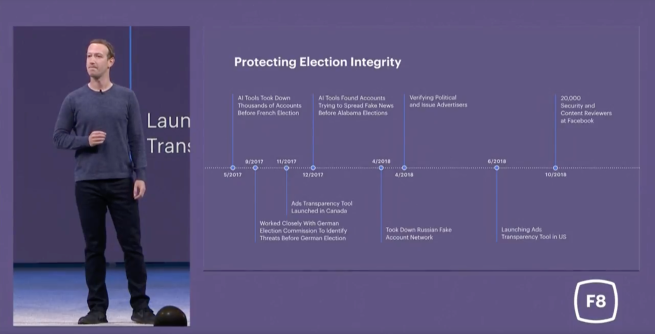 The company went on to discuss the Cambridge Analytica scandal. Back in 2014, Facebook had already begun restricting data to developers in a way that it thought would resolve many privacy issues. However, after that didn’t work out, the company wants to roll out changes that will prevent data login mining.

Facebook will also be endlessly looking for bad apps by way of independent auditors. In the Facebook app, third-party app settings will now sit on top, giving users a much easier way to both see and access what apps have access to. Zuckerberg strongly believes that the new GDPR laws are great and is asking everyone to review privacy controls not only on the Facebook platform, but elsewhere as well.

He also noted, “Security isn’t an issue we can solve forever,” and that the teams at Facebook are working day in and day out to resolve security breaches and exploits as quick as possible.

Beyond privacy, Zuckerberg announced a few new features being added to Facebook’s platform.

The first of which will be Watch party. This new feature will allow you to watch videos and chat with your friends. Zuckerberg’s example was using the feature to watch your friend testify in front of Congress. This is taking Facebook’s existing live streaming feature to the next level. 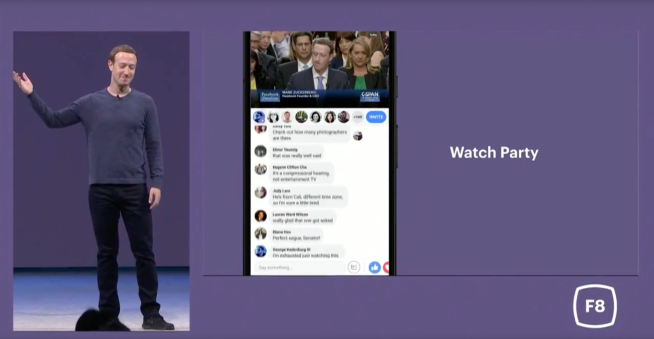 The company is also launching Meaningful Communities, making it much easier to both join and manage communities on Facebook. There will now be a new groups tab to make groups more central to the overall experience. You’ll now be able to join groups outside of the platform, by way of a new “Join Group” button. 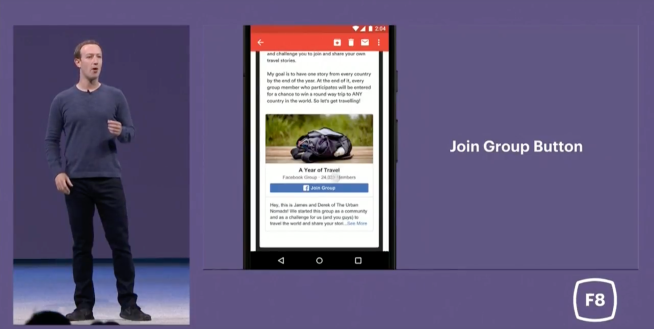 Facebook says that 1 in 3 married couples in the United States now meet on the platform. To help aid this, Facebook is launching Meaningful Relationships, a new set of features coming soon surrounding dating. The focus will be on long-term relationships, and Facebook will not recommend anyone who is on your friends list, that way you have a clean start. This will no doubt create some competition with Tinder.

Zuckerberg then moved on to Instagram, which is now getting a new redesigned explore tab, focusing on topic channels. Along with this, Instagram will now support both video chat and group video chat, with the ability to continue browsing the app while on the call. Last year, Facebook announced AR Camera Effects for Facebook, now the company is adding support for this feature in Instagram as well. 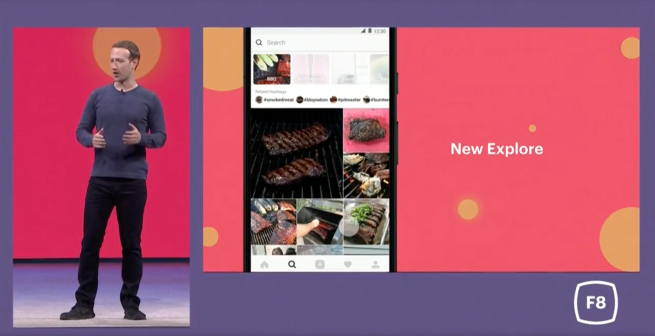 The company then took a minute to talk about WhatsApp. It says that users are now making 2 billion minutes worth of calls, and to help make this experience better, WhatsApp will now be getting the group video calling feature as well.

Moving right along, the company went ahead and talked about Facebook Messenger. The messaging platform will be getting a major redesign, focusing the app on the chat aspect. And just like Instagram and WhatsApp, it will now be getting AR Camera Effects Platform as well. 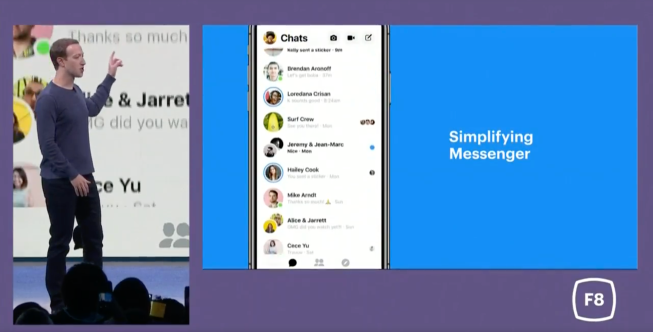 In terms of its Business chat, Facebook says that 8 billion business messages have been sent through the messaging platform since it launched.

And finally, the company talked about VR. Zuckerberg says that VR will be our main way of communication in the long-term, noting that “VR and AR will take this to a completely different level.” To help aid Facebook’s VR efforts, it announced that Oculus Go will be shipping today, starting at $199. Zuckerberg believes Oculus Go is the best and easiest way to experience VR.