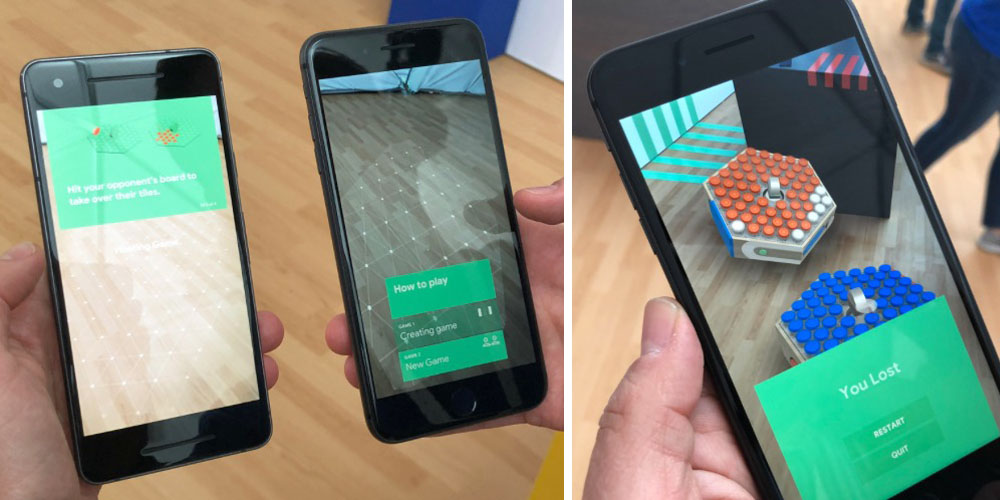 A demo game created by Google allows iPhone and Android users to shoot each other in augmented reality.

No, it isn’t platform wars getting out of control, but rather a demonstration of a way to allow Apple’s ARKit and Android’s ARCore to access the same augmented reality world …

CNET got a demo at Google’s I/O developer conference.

Light Board is a Google-made game demo for both iOS and Android that works across phones […] I set up a little home base full of colored target markers [on my iPhone], and someone from Google did the same on an Android phone across the room. I shot virtual missiles at their target, and they shot at mine. Whoever lights up all the targets first wins.

It works using what Google calls Cloud Anchors, which are ‘shared points of data shared in the cloud that multiple devices can access’ using either ARKit or ARCore or both.

As well as cross-platform multiplayer AR games, Google hopes the same technology can be used for more practical applications.

The killer apps here could lie in communal shared-space ideas beyond games. Google suggests group murals, but also large-scale educational projects, installation art, ways to map and layer information in spaces. It feels like one of the first steps toward multiuser AR, cross-platform no less, and that’s a very big thing indeed.

The game is expected to be available within the next couple of weeks.