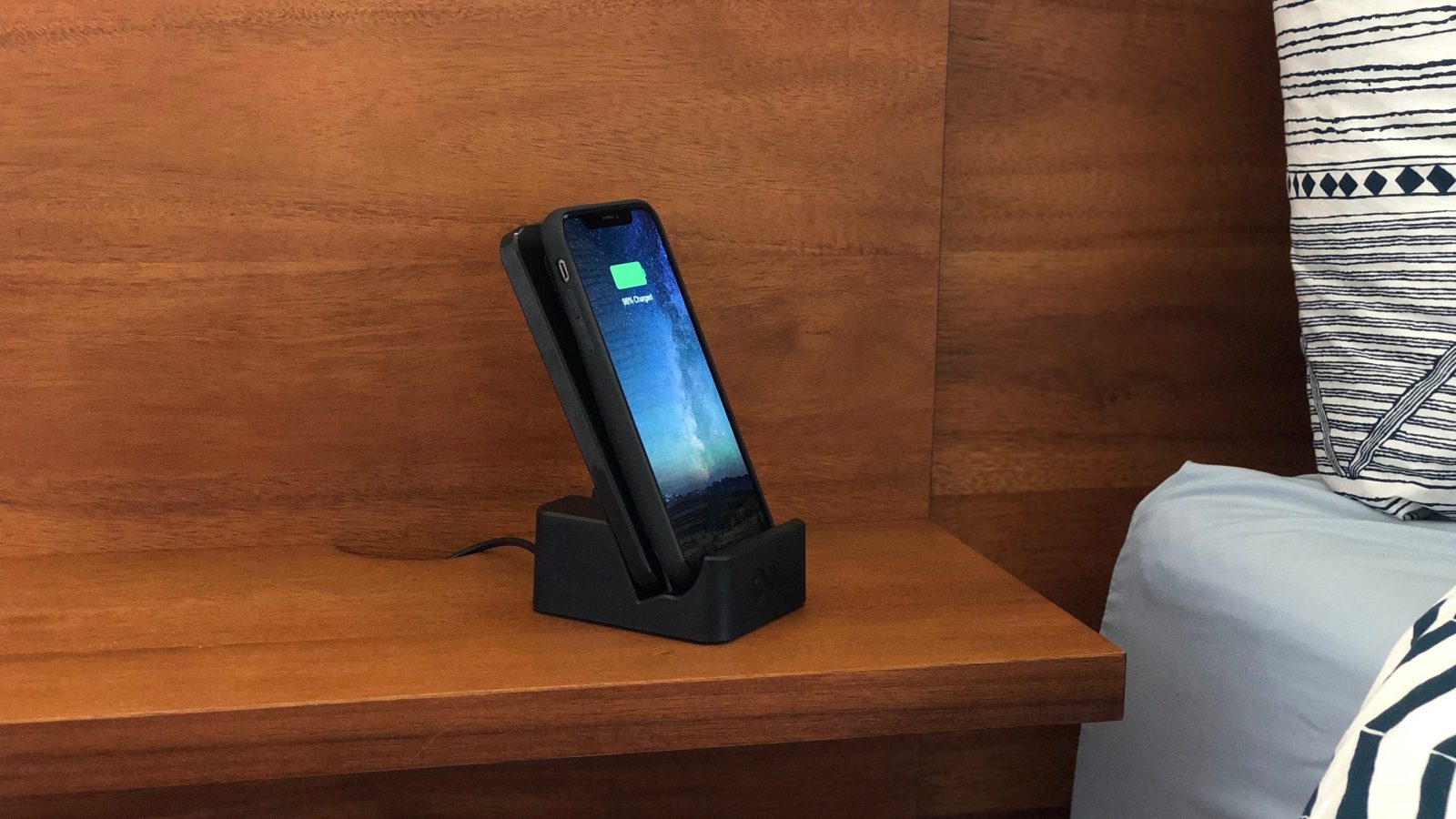 Case-Mate released its Power Pad Qi wireless charger last month and we’ve been testing it out for the last few weeks. With a unique design that allows it to stand or lay flat while in use, Power Pad is worth checking out. Read on for our full review.

Most of the Qi chargers on the market are either pad (lay flat) or stand-style. Samsung does offer one of the few convertible models out there, but it has a pretty bulky design. With a simpler aesthetic and versatile functionality, Case-Mate’s Power Pad offers a compelling solution. 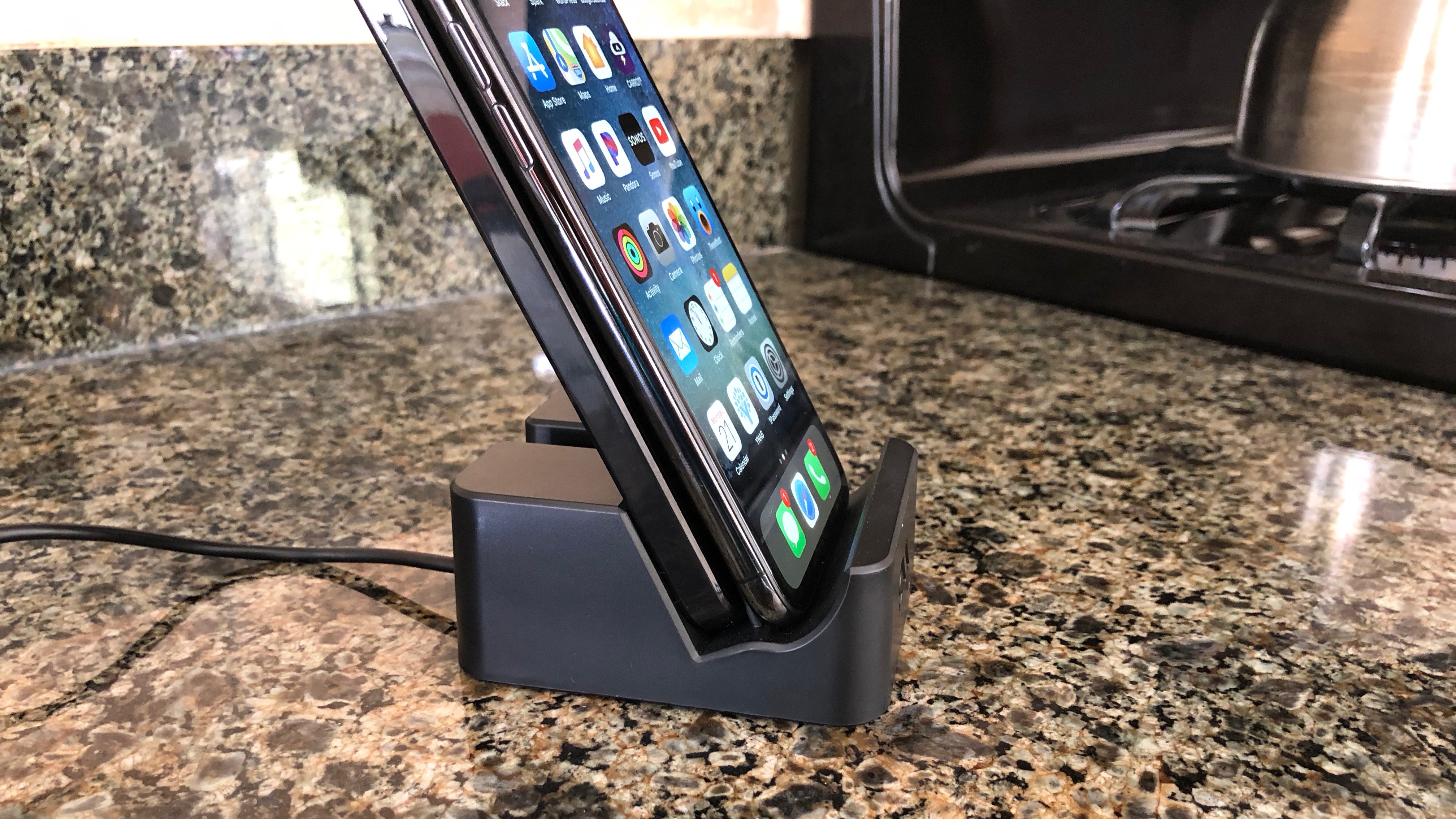 Power Pad is made with a plastic build. While you don’t get a premium feel like with some aluminum or metal options, it still feels well made. You’re also not paying a premium price for Power Pad, so it feels like a fair trade off.

The charger features rubber on the base of both the stand and the pad for stability when using upright or in the lay flat position. There’s also a rubber outline on top of the pad for slip resistance. This is especially nice when charging a naked iPhone.

There’s a discreetly placed white LED on the back of the charging pad. I appreciate that you don’t really notice it unless you’re looking for it.

Power Pad comes in black and white and comes with an 18W power adapter (the USB cable is built-in to the pad). One last addition is a riser block to help larger devices like iPhone 8 Plus be in the correct alignment with the Qi charger. I also found a secondary use for the riser block, more on that in a moment.

Case-Mate includes a 2-year warranty with the wireless charger. 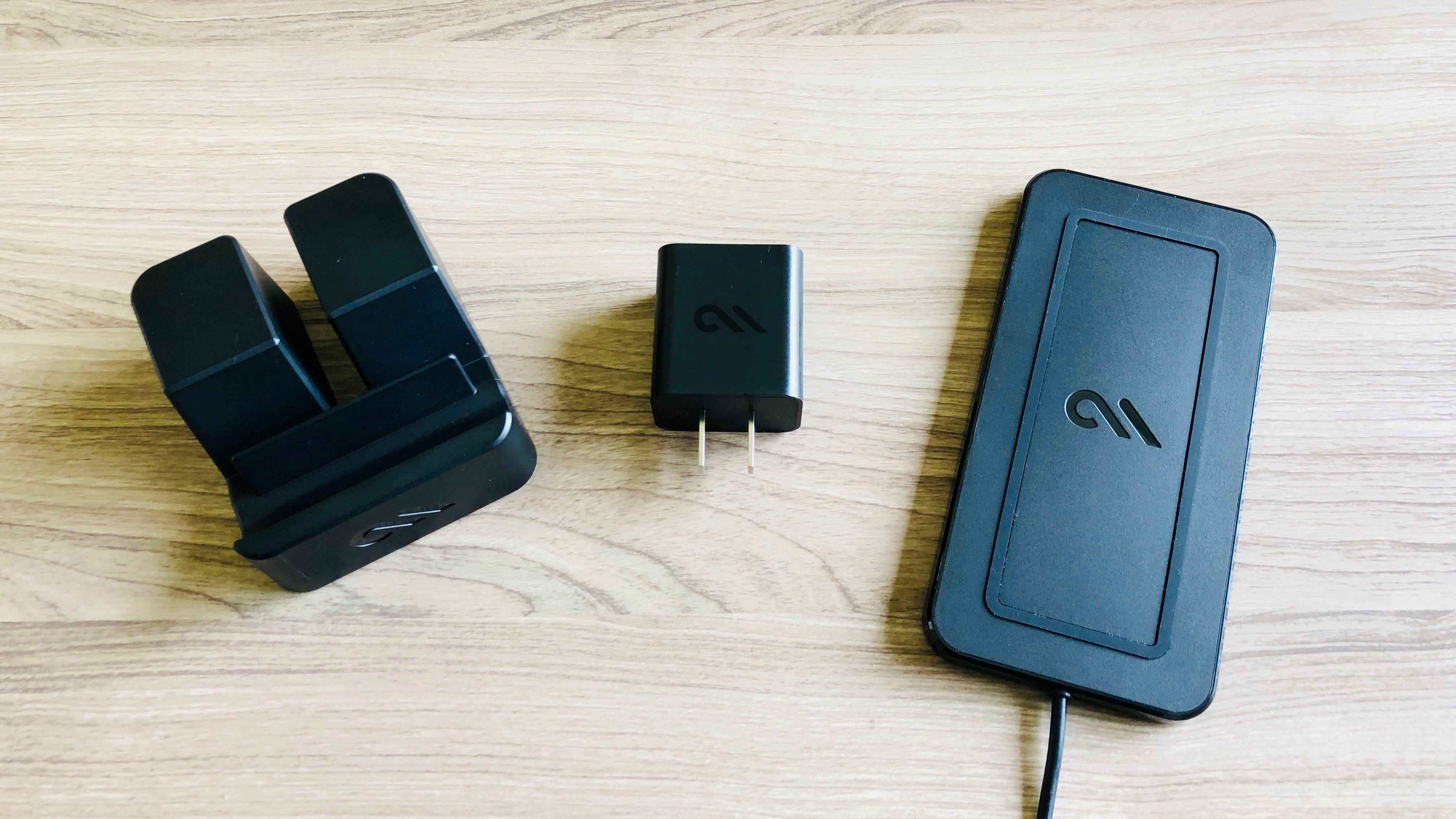 In my time with Power Pad, I’ve found it to be a reliable and useful wireless charger. Up until now I’ve been using lay flat models and I really like the upright functionality with the option to switch it up when needed. Having a wireless stand charger has been great for use in the kitchen and I’ve also found it convenient on my bedside shelf and office desk.

Power Pad’s design is dead simple, so you can instantly switch from stand to lay flat by just lifting the pad off the stand.

One drawback I found with Power Pad was the Home indicator being covered up just enough when in stand mode to be a hindrance. I started using Siri to open apps more frequently as a work around, but then realized I could easily repurpose the included riser block to sit under my iPhone X instead of under the Qi charger for a handy solution. 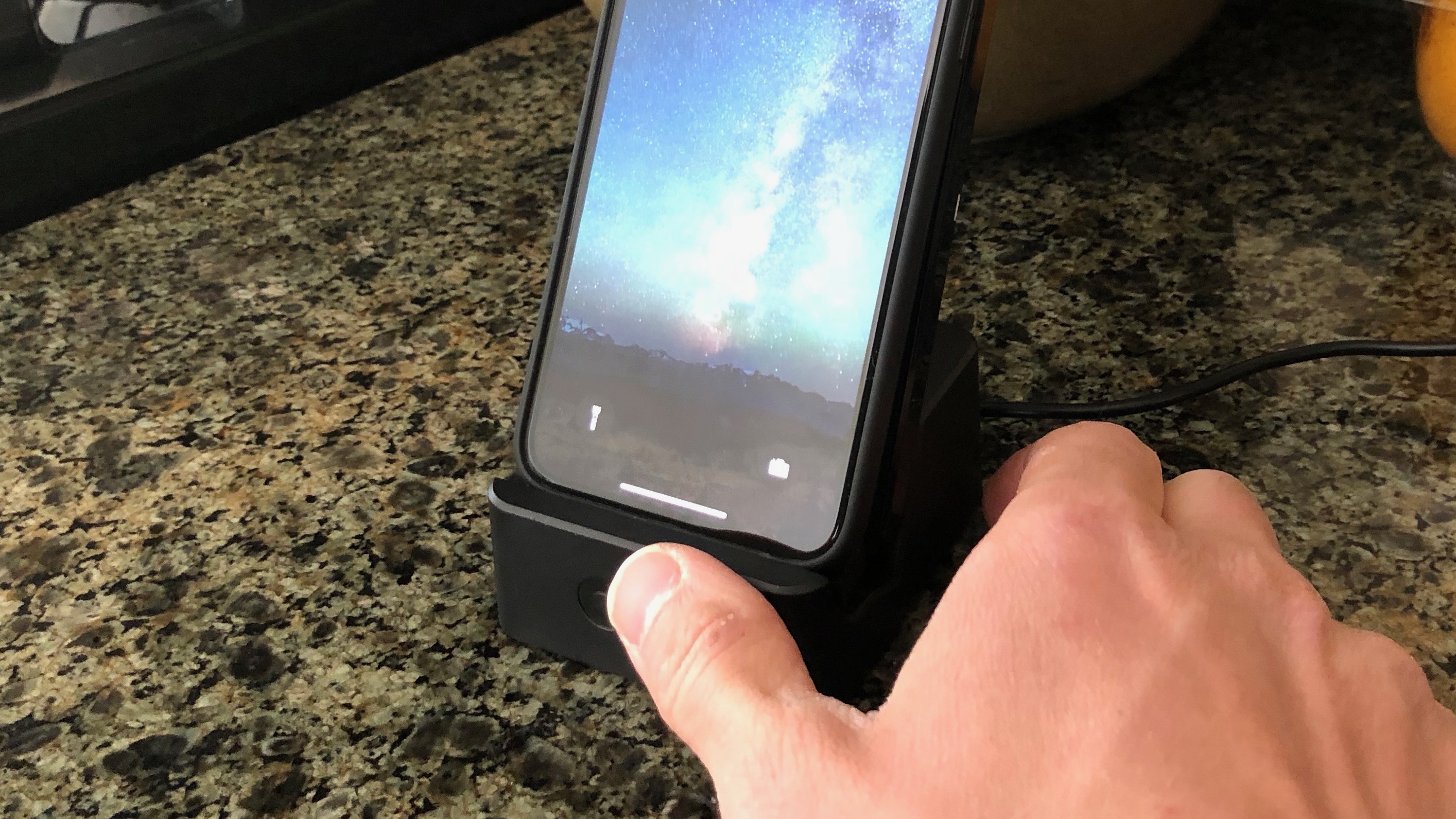 Using the included riser to solve the Home indicator issue

As I’ve mentioned before, speed isn’t a concern or consideration for me with wireless chargers. For me it’s really about the convenience of being able to plop down my iPhone before bed or on my desk without having to plug in.

If you need fast charging, you should pick up a USB-C to Lightning cable and power adapter (or use a 10W brick for almost the same speed).

Another consideration when using a stand-style wireless charger is that your iPhone will be a bit wobbly when you’re not using a case due to the camera bump. This is something to think about with any wireless charger, but I found Power Pad to be more pleasant to use with a case.

The only other aspect I think Case-Mate could improve with a future Power Pad version would be to simplify and minimize the base. I like how the pad portion is slim and covered when in use, but the base feels a bit bulky.

With its convertible design and versatile functionality, Power Pad is definitely worth considering. While it would be great to see a Power Pad in the future with a metal build and slimmer base, the current model feels like a good value.

Power Pad’s standard retail price is $60, but you can currently find it on Amazon for $42 (with extra 10% off extra savings). 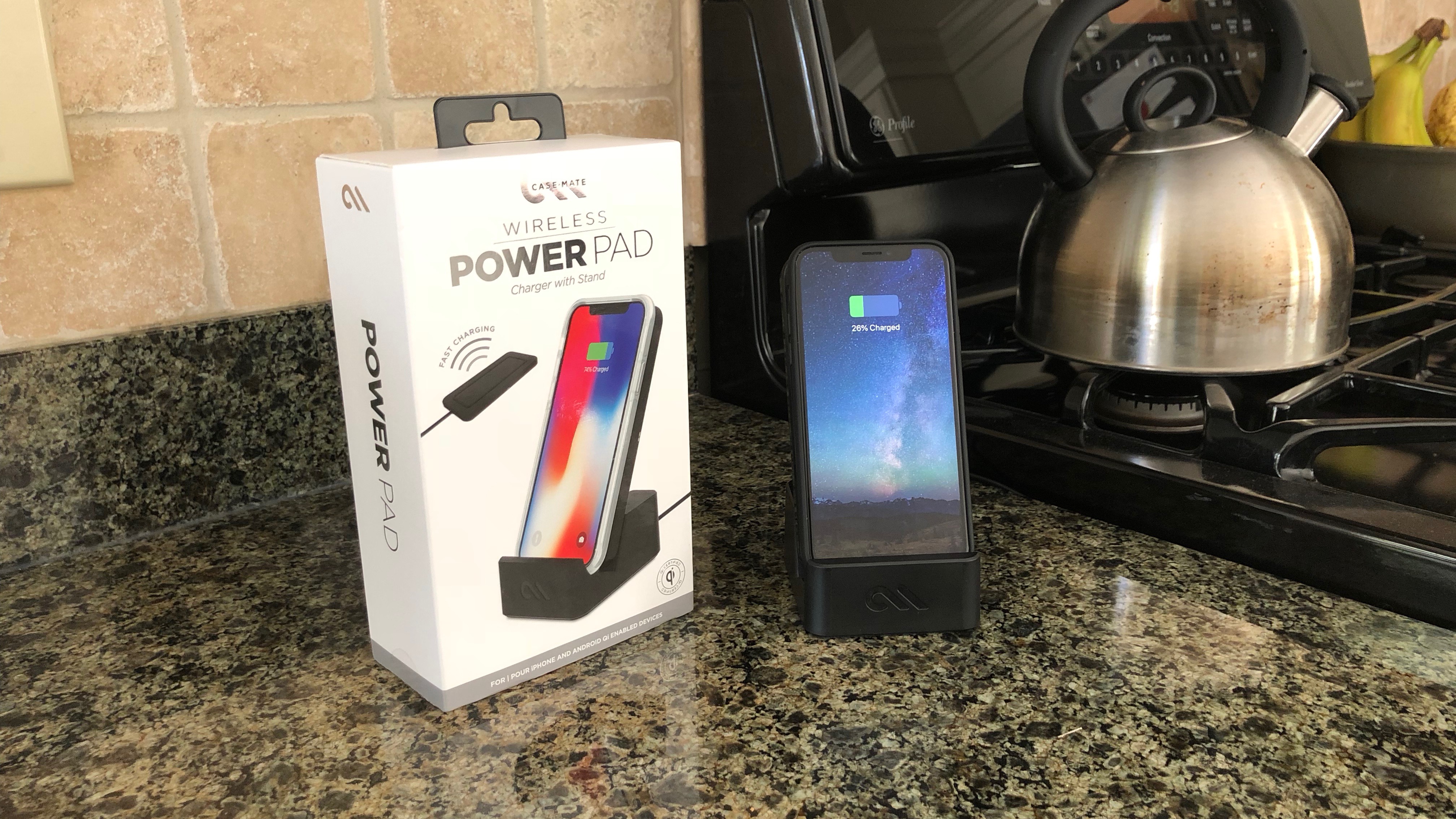