Apple hopes that its Apple Pay mobile payment platform can help ease the process of buying drinks at concert festivals everywhere. According to a new report from TechCrunch, Apple Pay powered an “order ahead” feature at last week’s BottleRock music festival near San Francisco…

The feature allowed Apple Pay users to skip the lines when it came time to order a drink. Instead of having to wait in a long and slow-moving line, and miss the show, users could use the BottleRock festival application to place their drink order from their iPhone and checkout with Apple Pay.

From there, the drink would be ready at the pickup window, with no queue. The feature was advertised on signs throughout the festival, which touted that users could “skip the line” by ordering in the festival app with Apple Pay and simply picking their drink up. 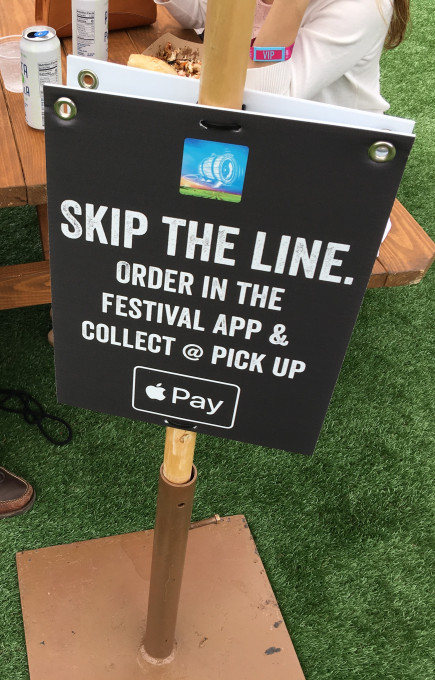 Apple seemingly has high hopes for Apple Pay’s usefulness at concerts and festivals. Last year at BottleRock, the company deployed Square’s Apple Pay-eqipped terminals and offered special fast lanes for users who would checkout with Apple Pay. The company told TechCrunch this week that this initiative led to “thirty percent of all transactions at BottleRock” being made with Apple Pay.

BottleRock’s upscale wine and oldies music fest, 100 miles from the tech giant’s headquarters, has become a testbed for Apple Pay. Last year, every concession stand got equipped with the Square’s Apple Pay-ready point of sale system and special fast lanes for customers who used it instead of cash or credit card.

Thirty percent of all transactions at BottleRock were made with Apple Pay, according to an Apple spokesperson, proving people wanted a faster way to get back to the show.

Festivals represent a lucrative market for Apple in terms of Apple Pay usage. Not only does it mean users can leave their wallet behind, but it also means they can spend less time waiting around in long lines and more time enjoying the music.