Affinity Designer for iPad: 20+ getting started tips and tricks [Video] 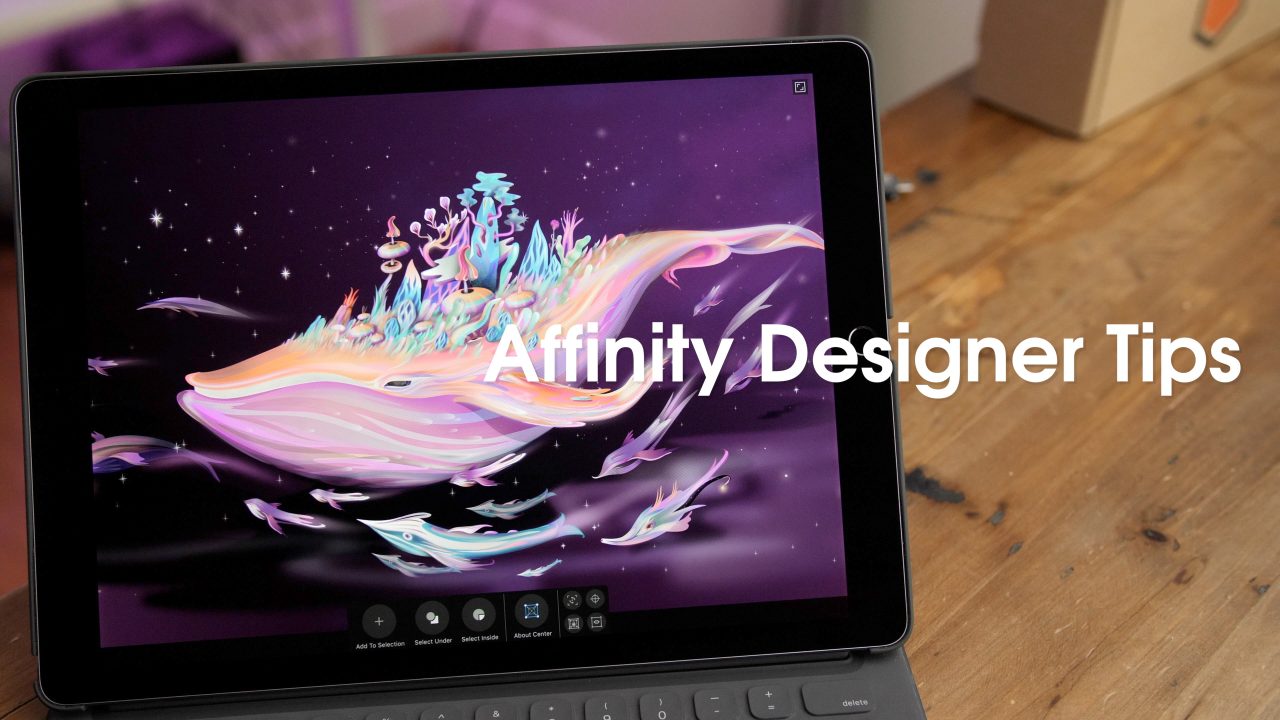 After using Affinity Designer on iPad, I can confidently say that there aren’t many apps of a similar echelon in the App Store. The companion app to Affinity Photo, Designer is a vector illustration app that can operate as an outright Adobe Illustrator replacement for many graphic artists.

In this initial hands-on walkthrough, I step through over 20 features in Affinity Designer, focusing heavily on the gesture-based toolset that makes it such a powerful app for iPad users.

The main takeaway that I got from my hands-on time with Affinity Designer is that gestures rule. Of course, you can perform any operation by venturing through menus, but gestures harnesses one of the iPad’s main advantages — responsive multi-touch controls.

The first thing you’ll need to do when you install Affinity Designer is become accustomed to its user interface. The app is broken down into several pieces, and features a setup similar to the desktop version.

If you’ve ever used any Affinity apps, whether on Mac or on iPad, you’ll largely know what to expect. The following four areas are key elements of the Affinity workflow:

Toolbar – Tools that change based on the selected Persona. 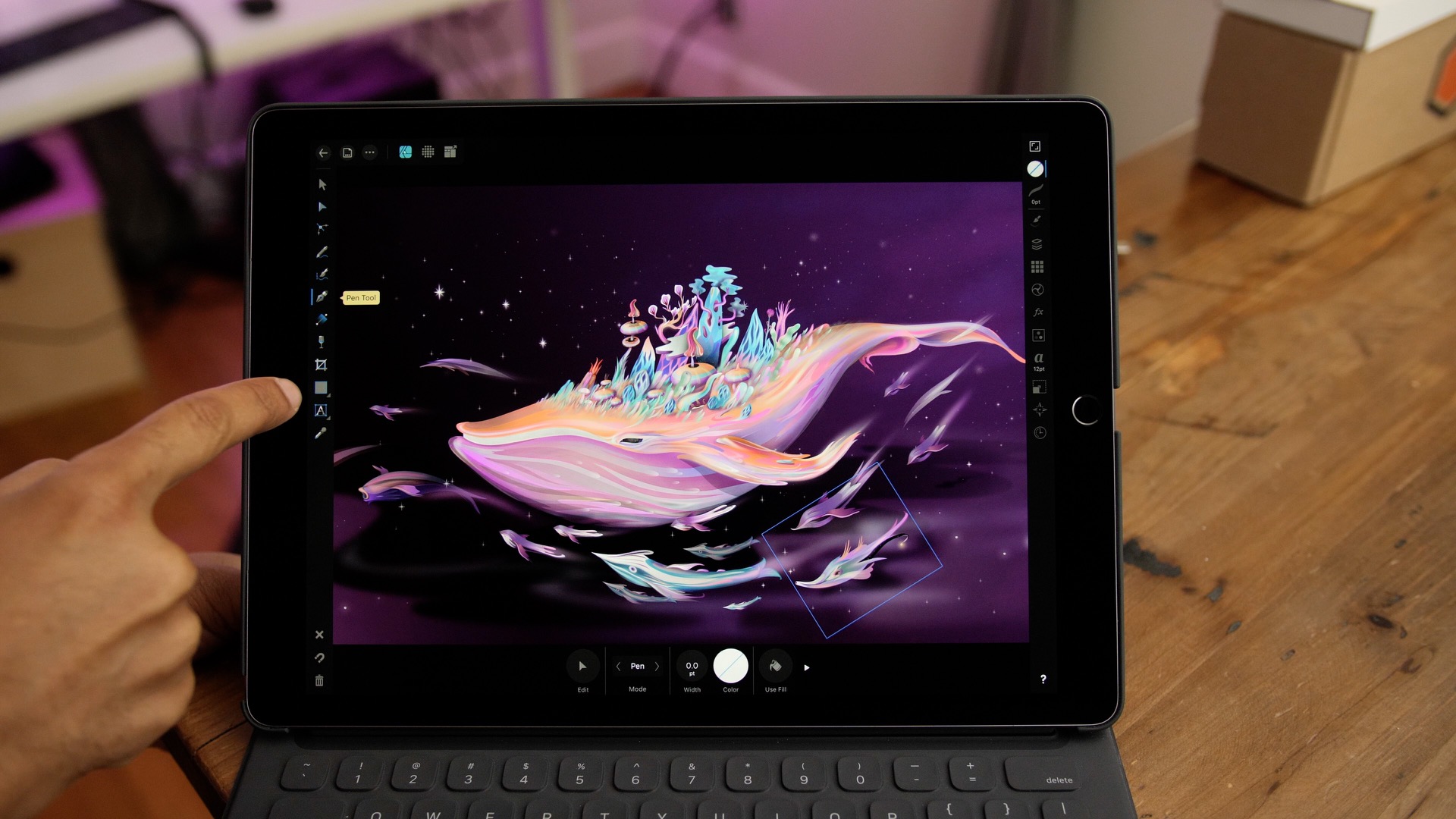 Moving around the canvas

To move around the canvas in Affinity Designer, use a two-finger gesture to pan around.

Zooming can be accomplished via several methods. The easiest way to zoom is to simply use a pinch in or pinch out gesture. Pinching in will zoom out, and pinching out will zoom in. 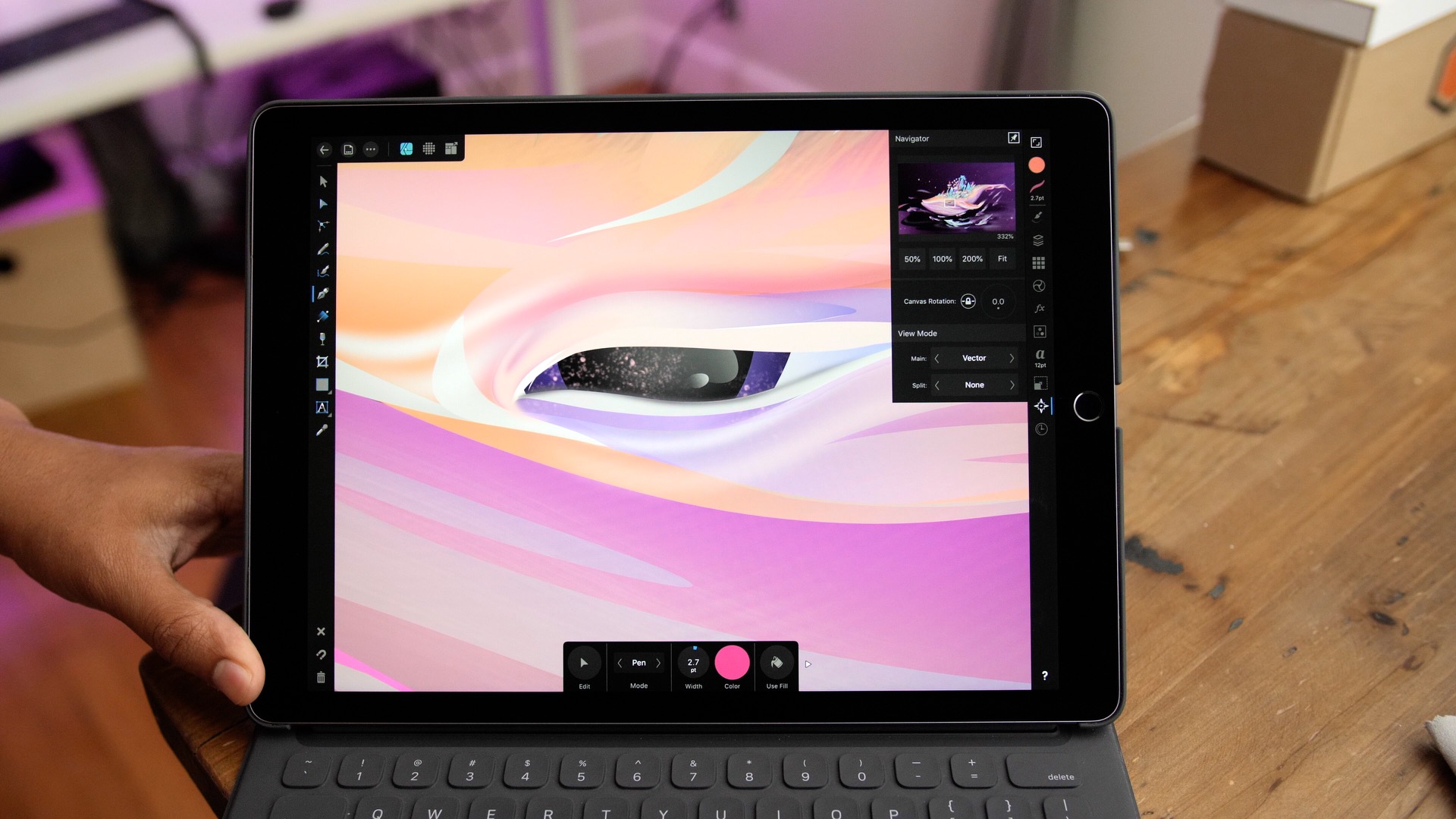 How to select objects

With the Move tool selected, drag around one or more canvas objects to make a selection. By default, your selection box must capture the entirety of an object before it is selected. 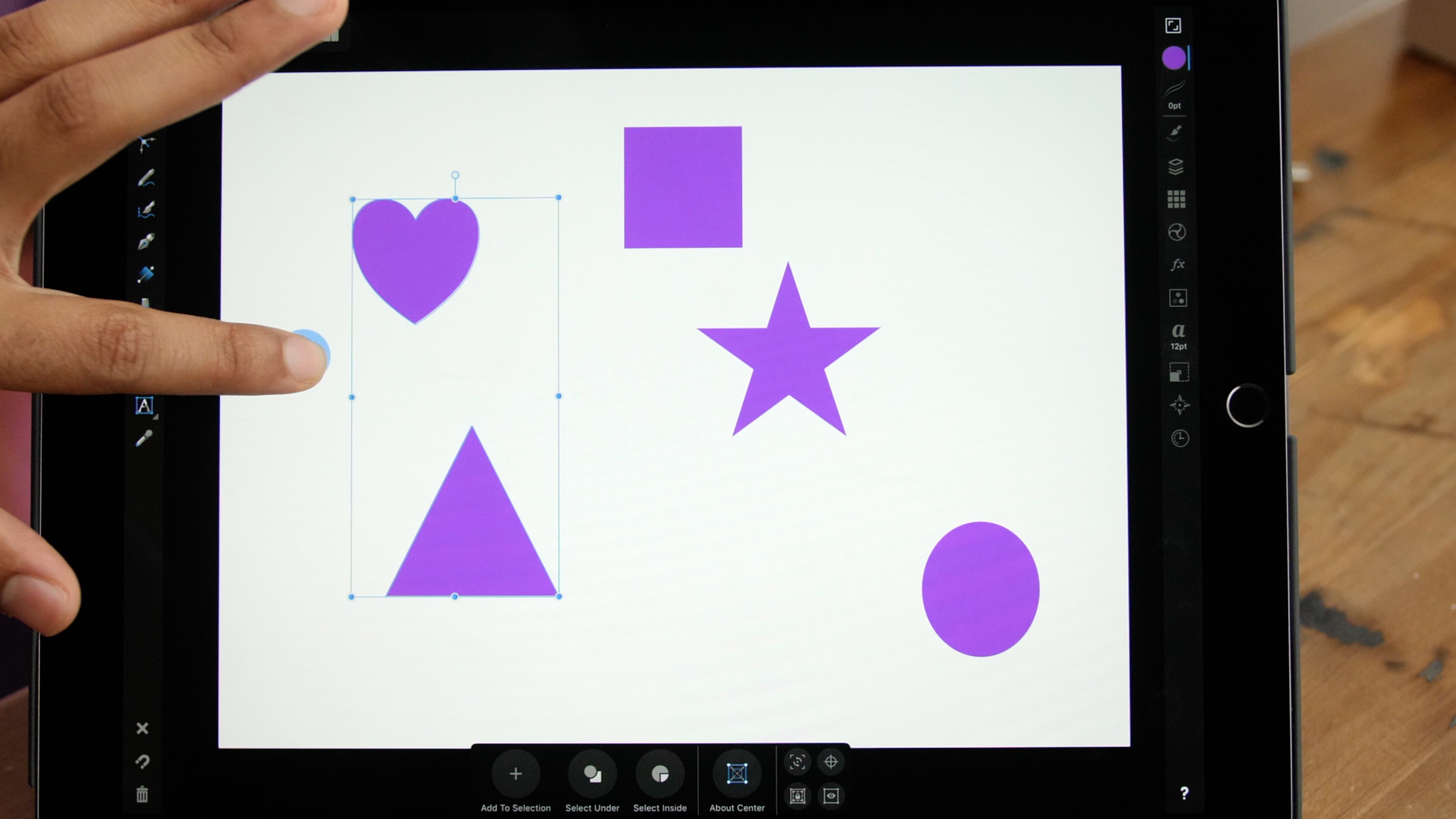 You can also tap on an object to select it, or tap while using a single finger modifier to select more than one object. Be sure to watch the video walkthrough above to see how it’s done.

How to deselect objects

You can quickly deselect one or more objects by tapping the deselect ‘X’ button in the bottom left-hand corner.

How to delete a selection

To delete one or more selected objects in Affinity Designer for iPad, tap the trashcan button in the bottom left-hand corner.

Snapping is a handy tool that allows you to easily align objects to other objects, or dedicated spots on your project canvas. Tap the magnet button in the bottom left-hand corner to toggle snapping functionality.

Like Affinity Photo for iPad, Affinity Designer features an easy-to-use gesture-based undo and redo system. A two-finger tap anywhere on the canvas will facilitate an undo, while a three-finger tap will perform a redo. 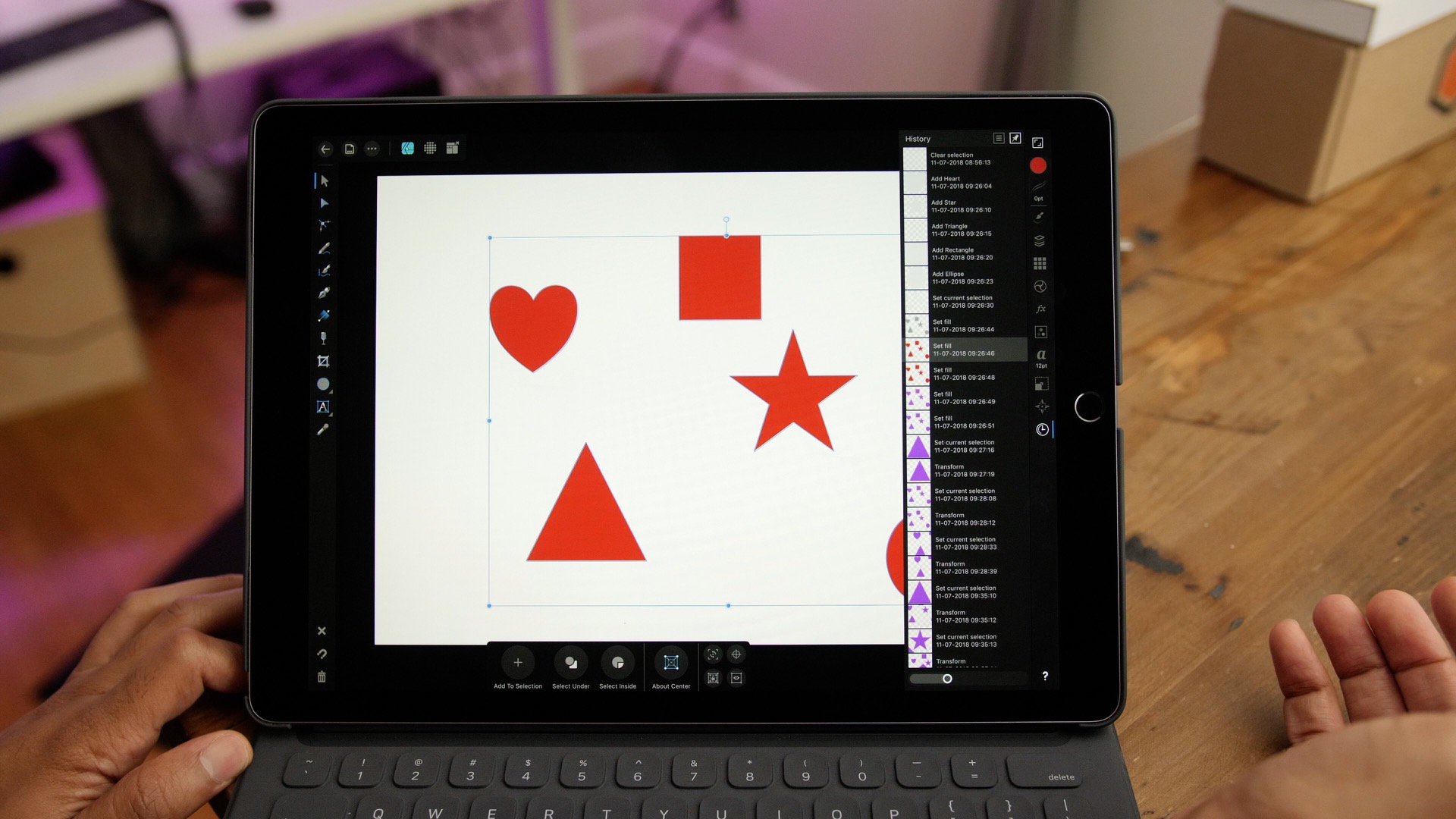 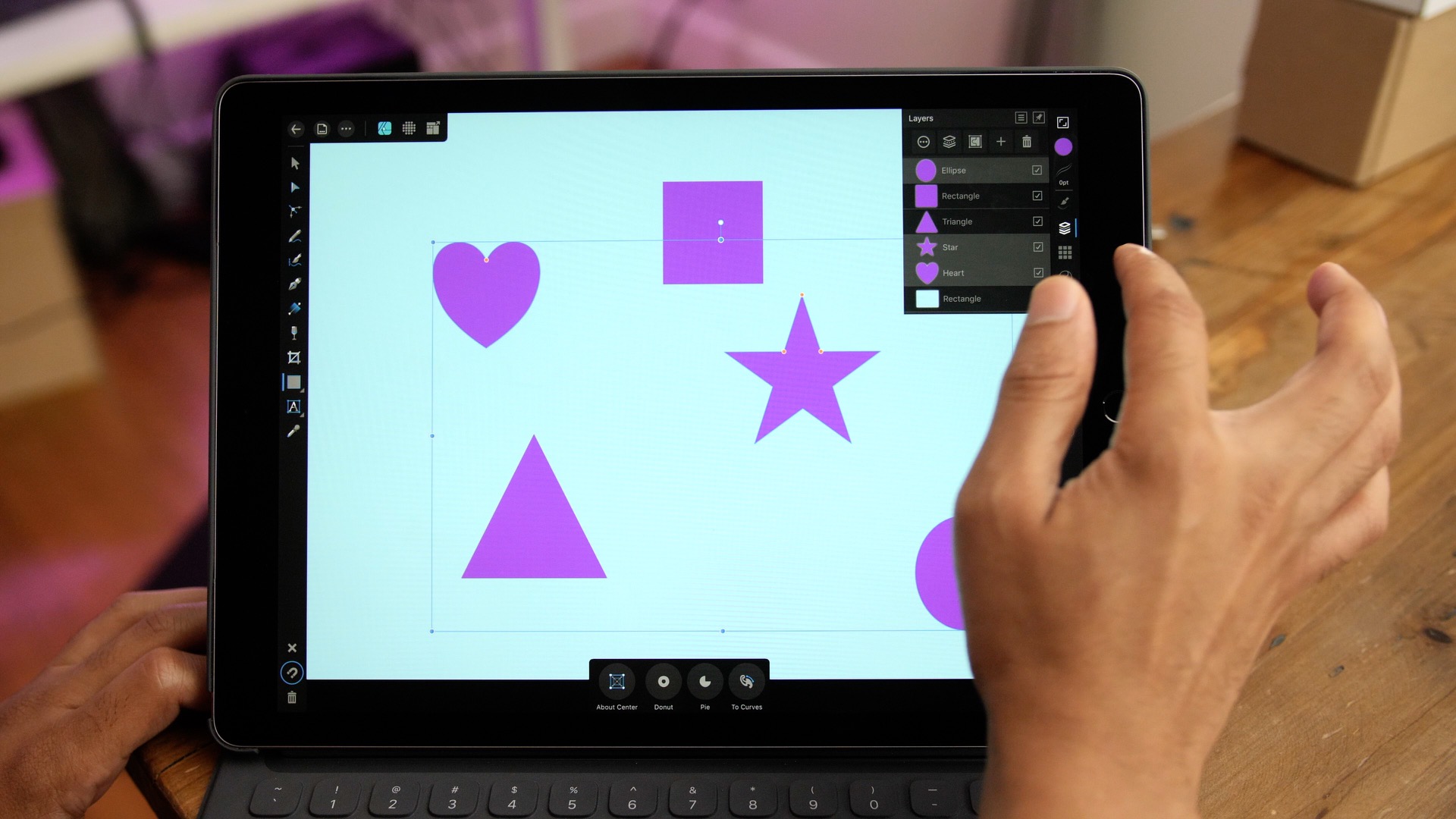 You can group layers by selecting more than one, and performing a pinch in gesture on the Layers Studio. Ungrouping layers works in reverse: select the group, and perform a pinch out gesture to ungroup. 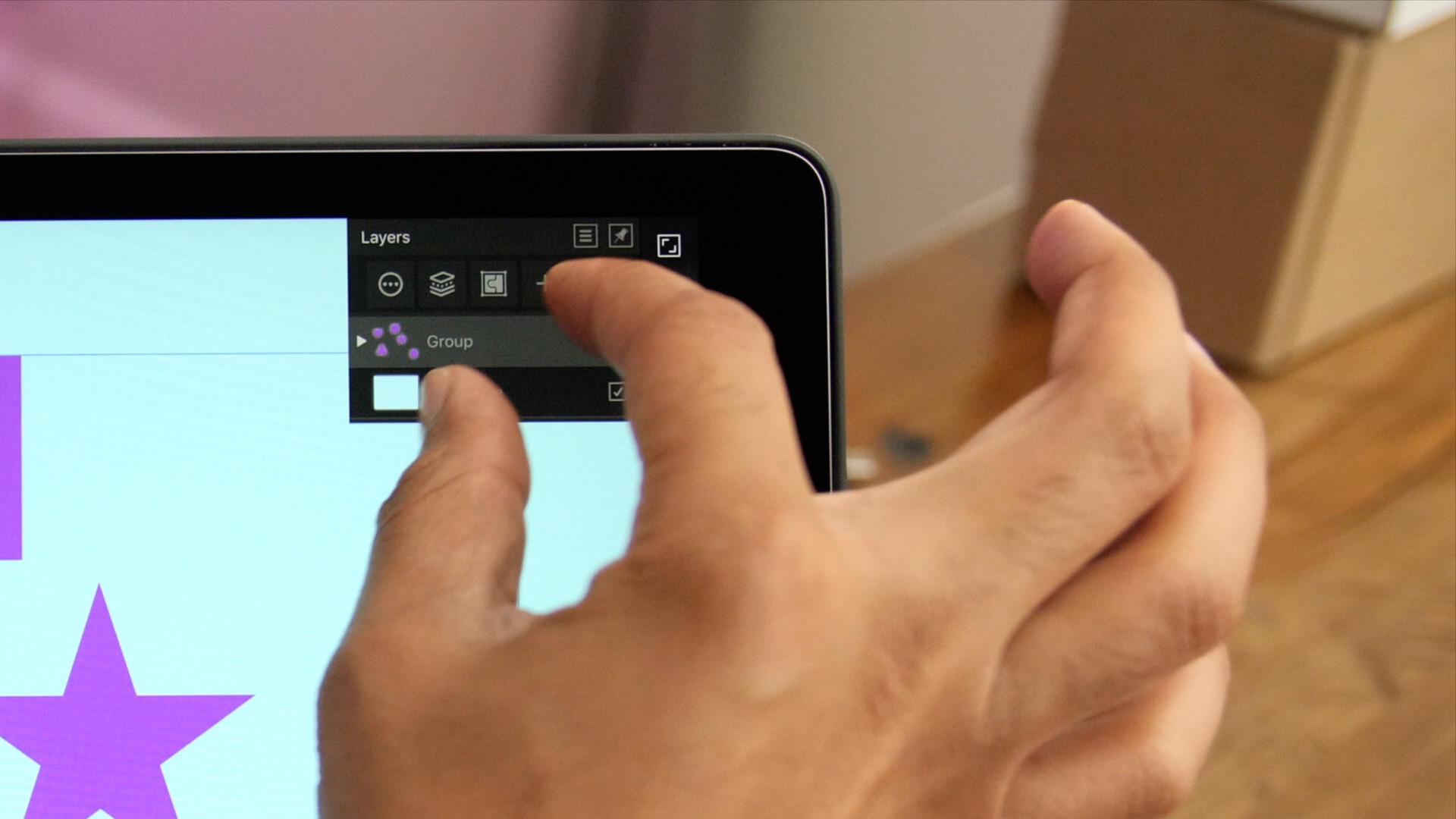 How to duplicate objects

The easiest way to duplicate an object is to use a two-finger modifier and drag away from a selected object. You can also use the Duplication option in the Edit menu. 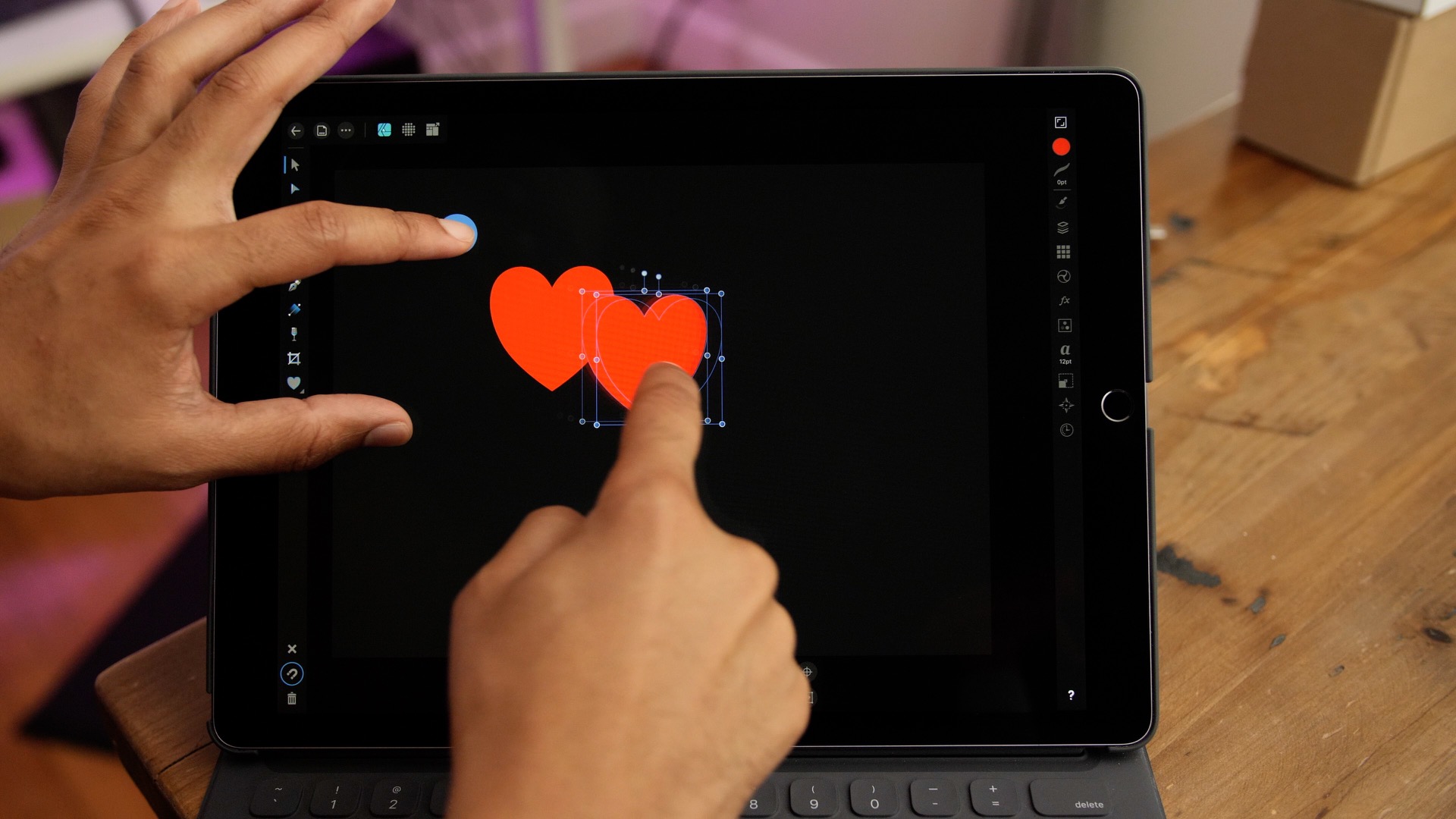 If you use the Duplication option in the Edit menu after making changes to a duplicated object, the next duplication will follow a recursive trajectory, potentially saving you lots of time. 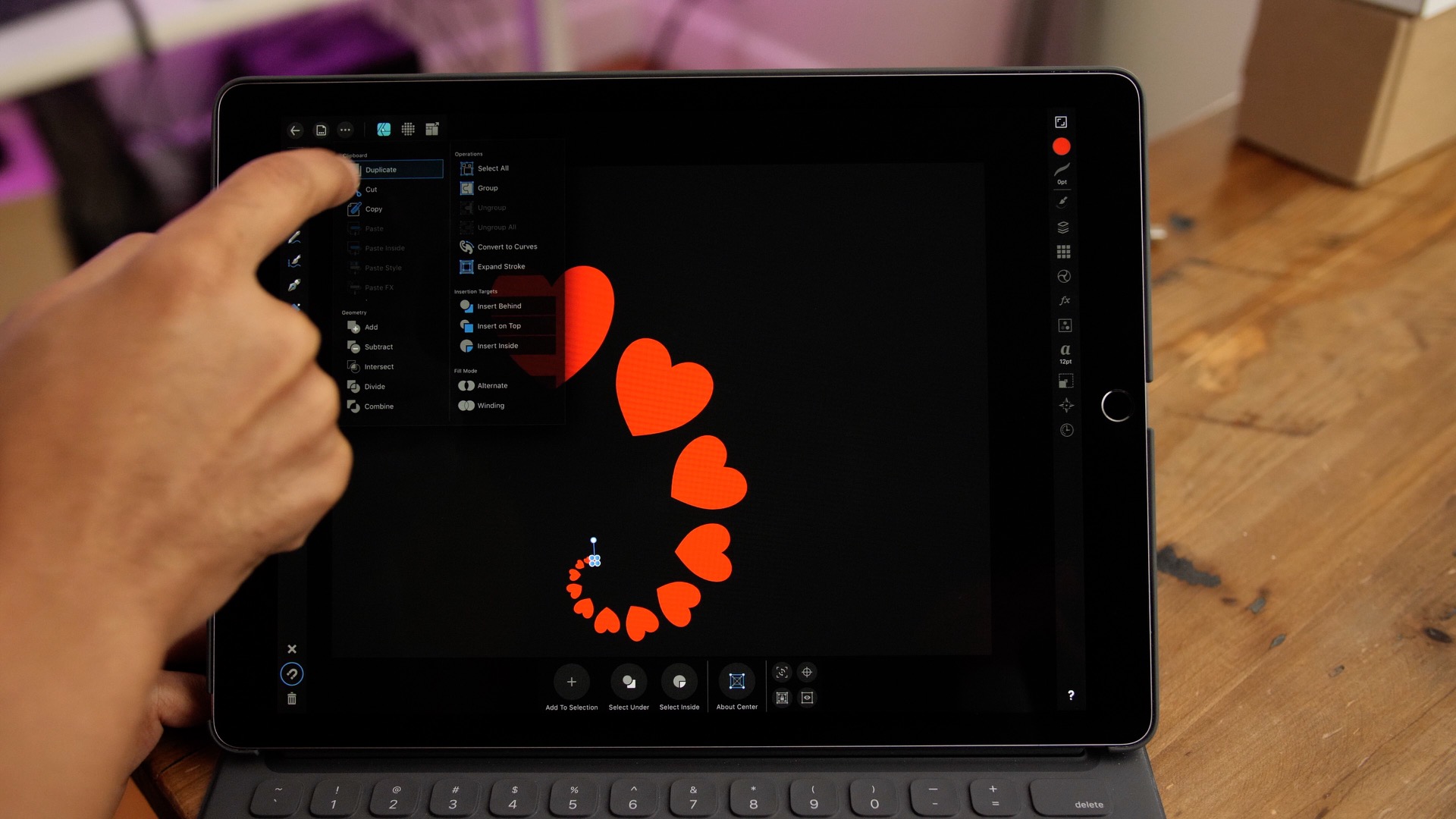 How to transform objects 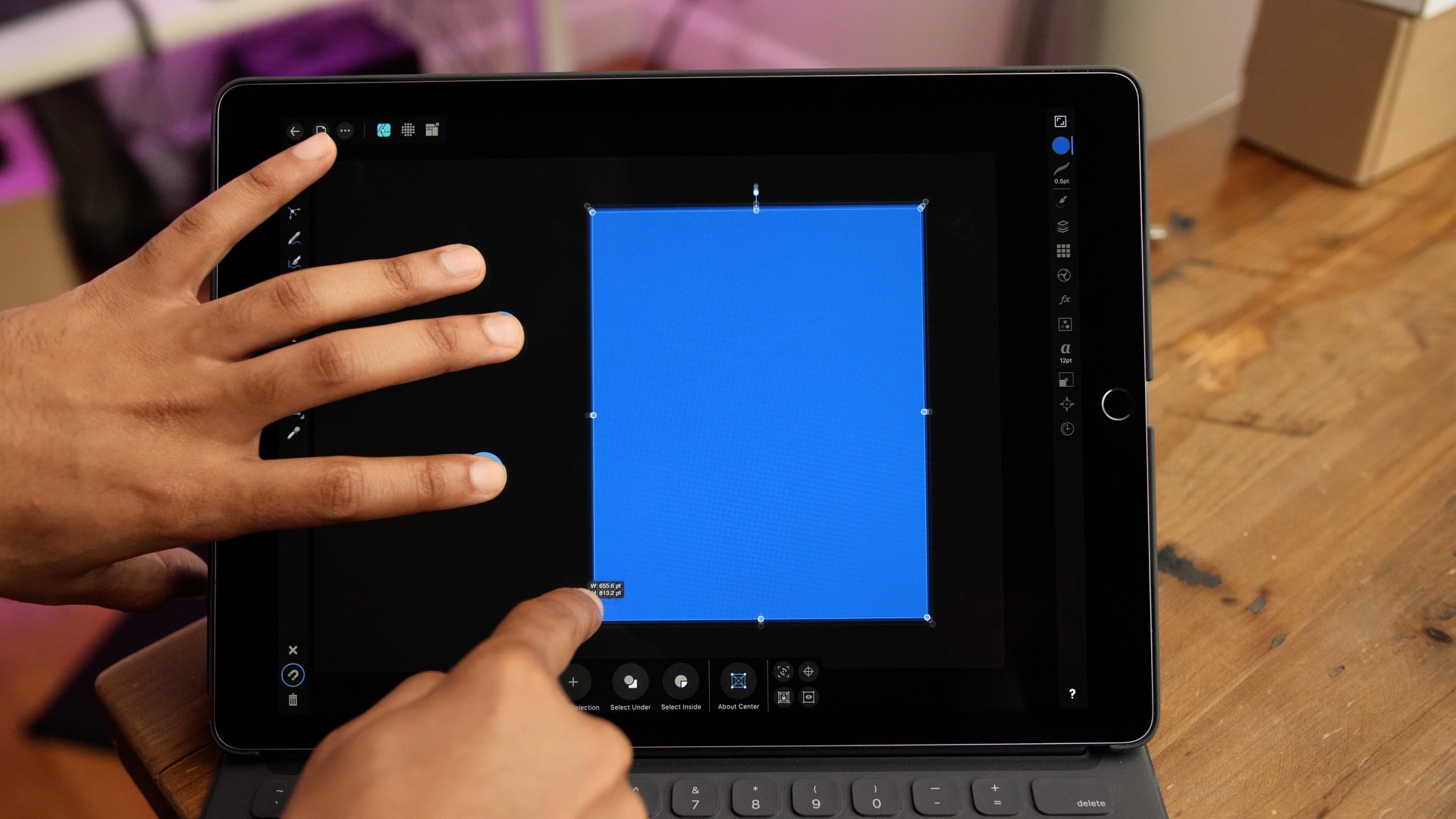 How to rotate objects 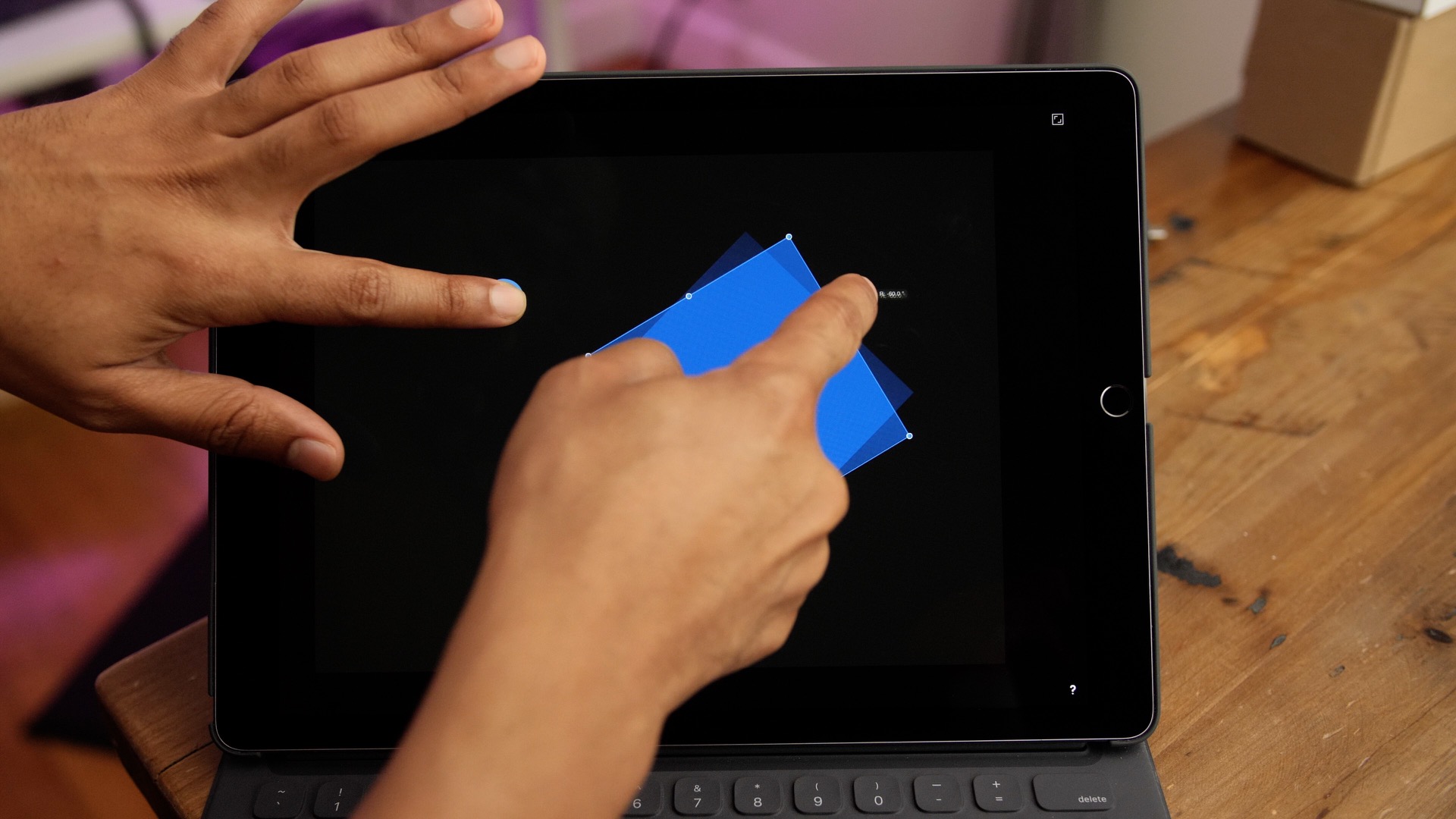 To quickly change an object’s fill color intensity, drag up or down on the Color Studio. 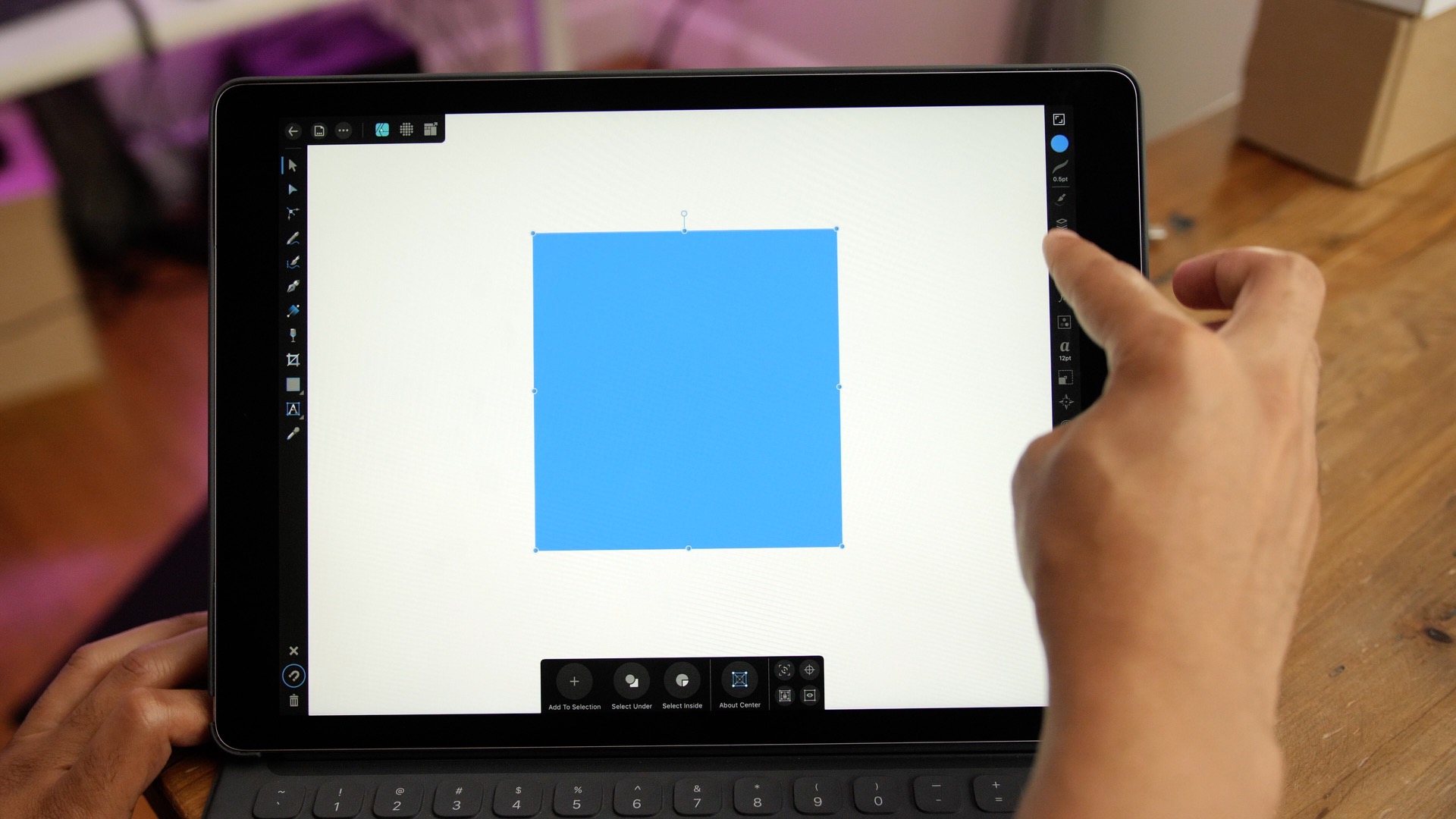 Drag on the Stroke Studio to change stroke size for a selected object on the fly. 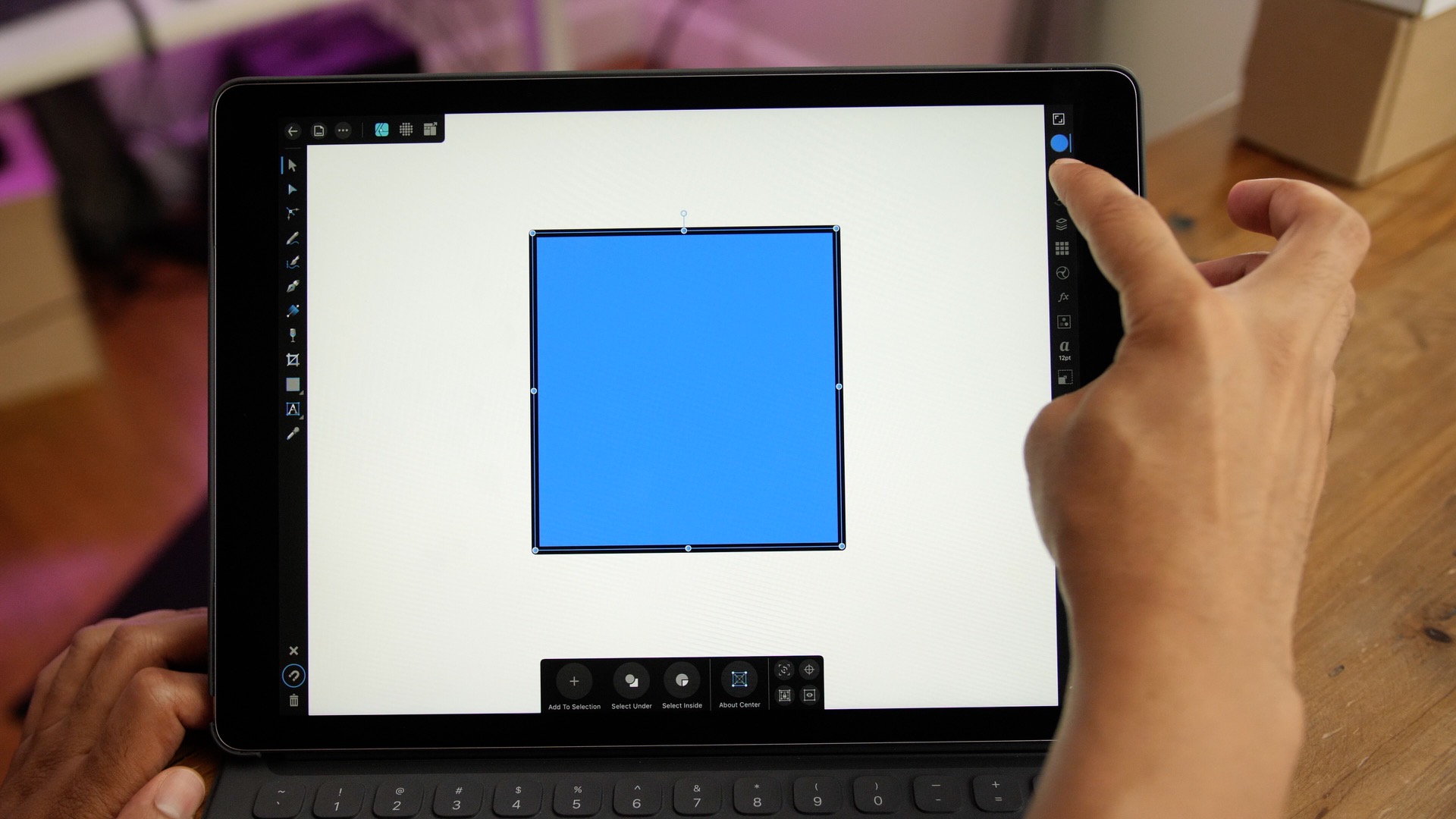 Perform a horizontal swipe on the stroke and fill colors inside the Color Studio to quickly swap between the two. 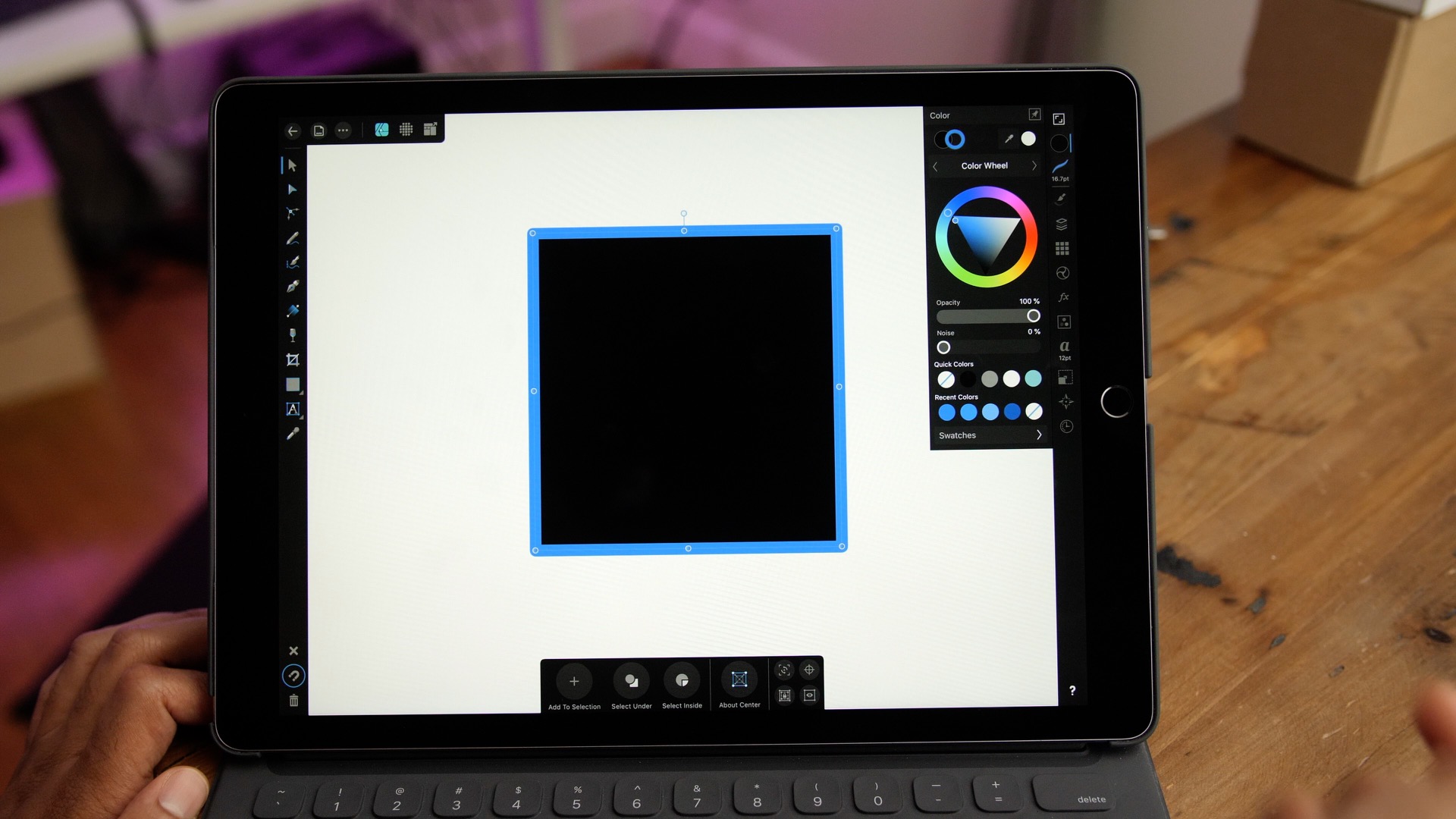 Inside the Color Studio, perform a swipe-up gesture on the respective colors to disable stroke and/or fill. 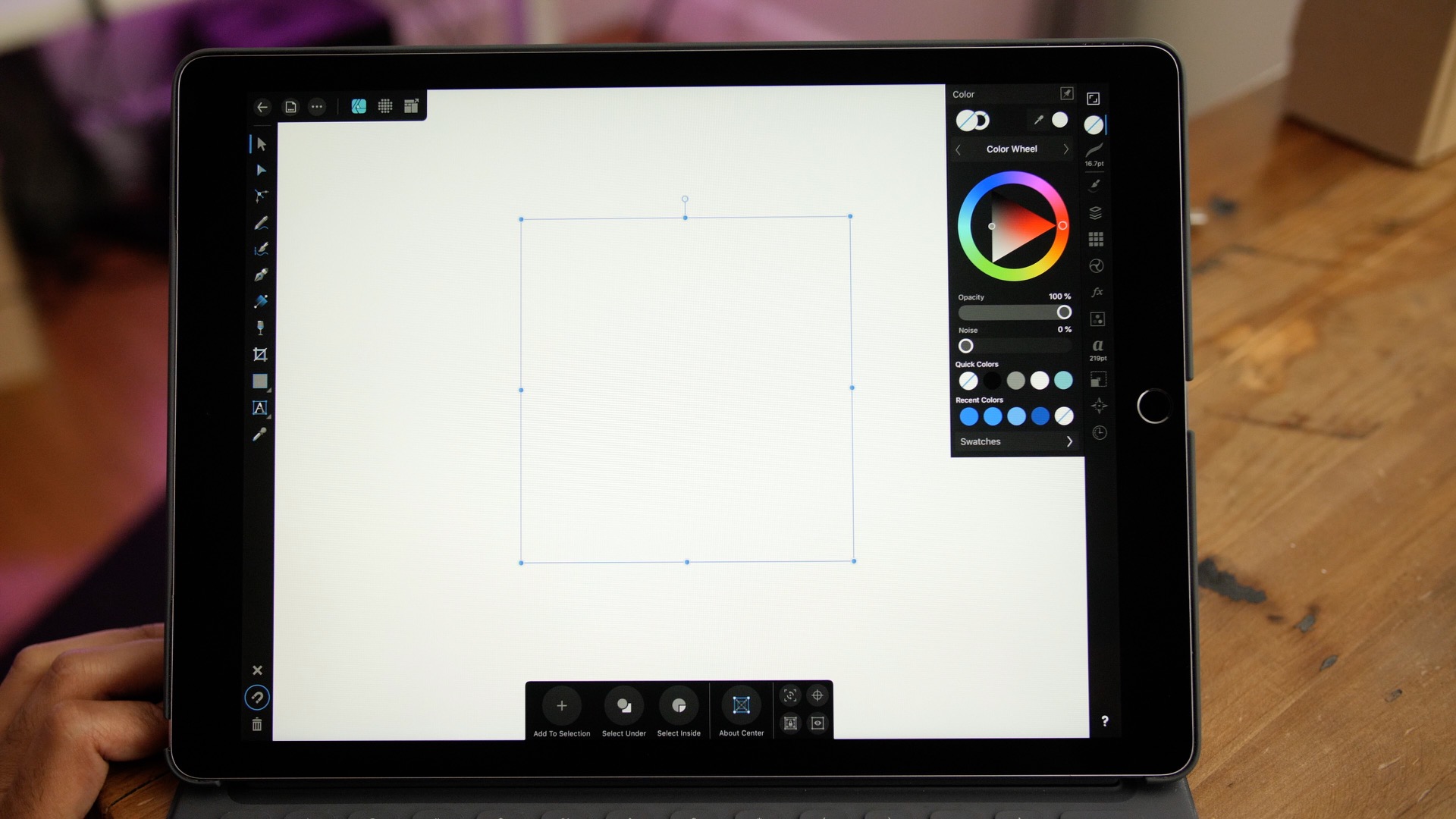 Swipe up or down on the Text Studio to quickly adjust the size of a selected text object. 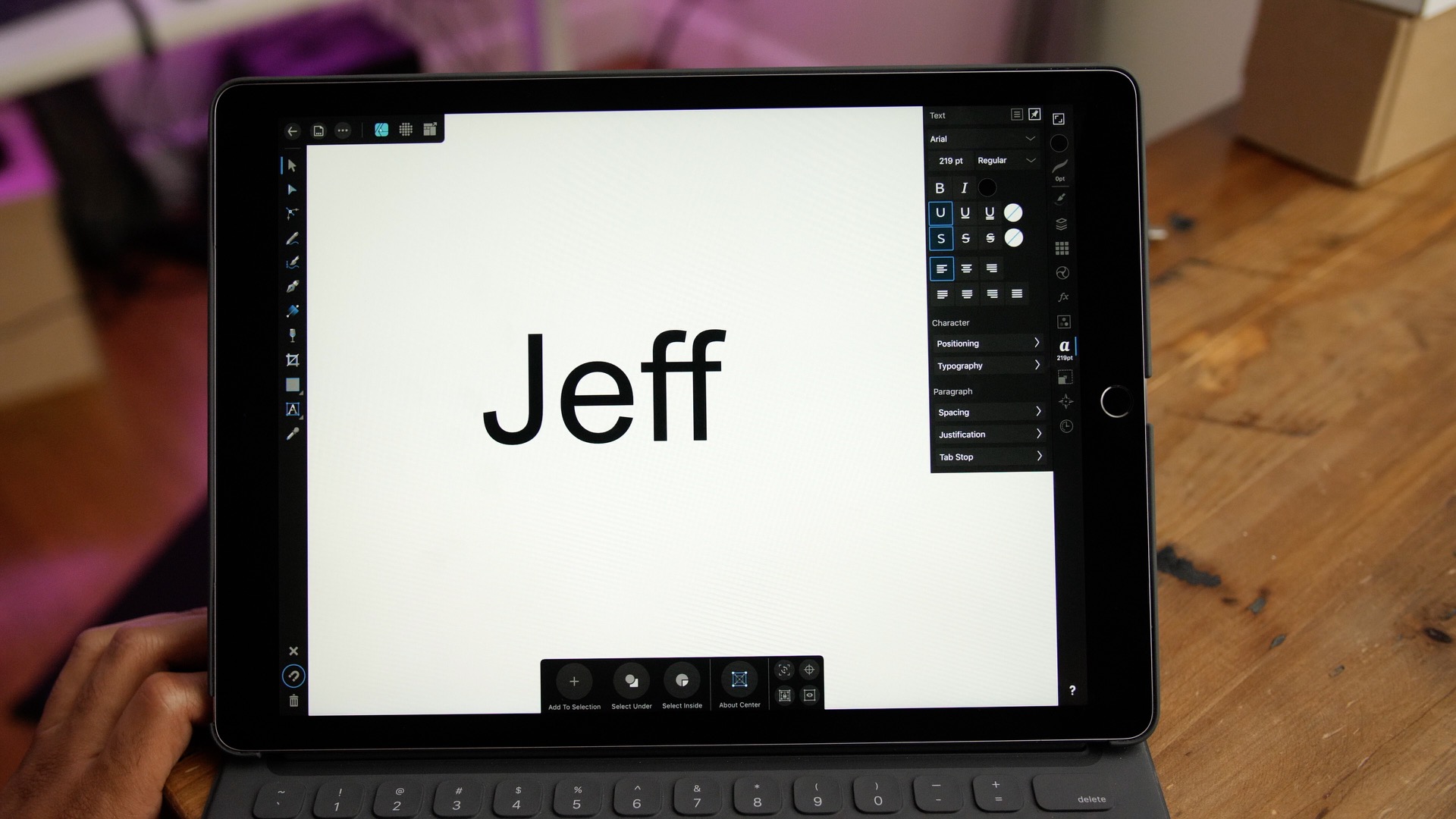 How to quickly change colors with the Color Picker

Select an object, choose the Color Picker from the tool bar, and long press on the object containing the color that you wish to use. The color that is displayed in the outer circle of the color picker is the color that will be selected. 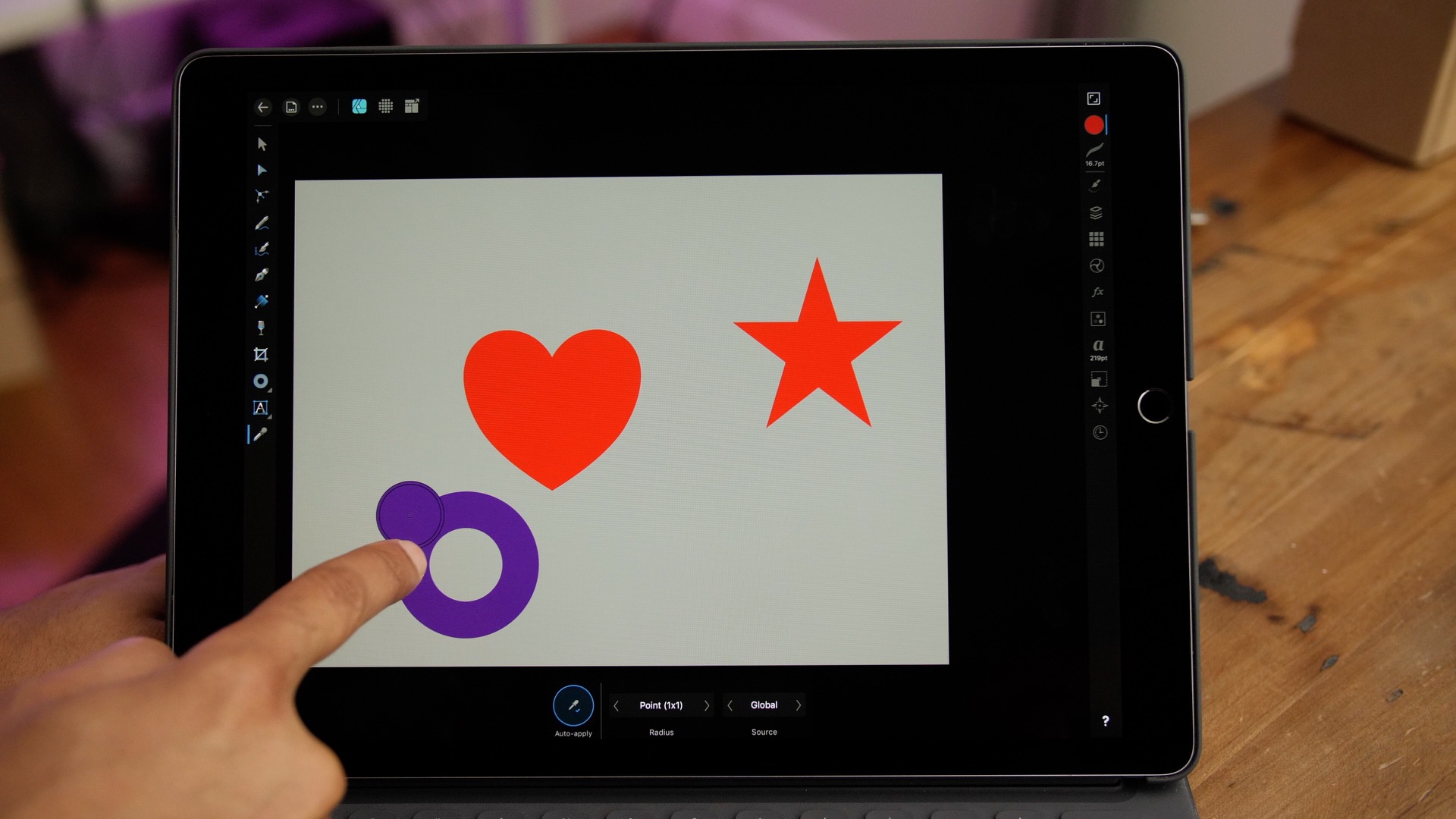 Boolean operations are some of the most powerful vector illustrations tools, as they allow you to use multiple shapes to create other unique shapes. The boolean toolset can be found inside the Edit menu, allowing users to Add, Subtract, Intersect, Divide, or Combine on more more shapes. 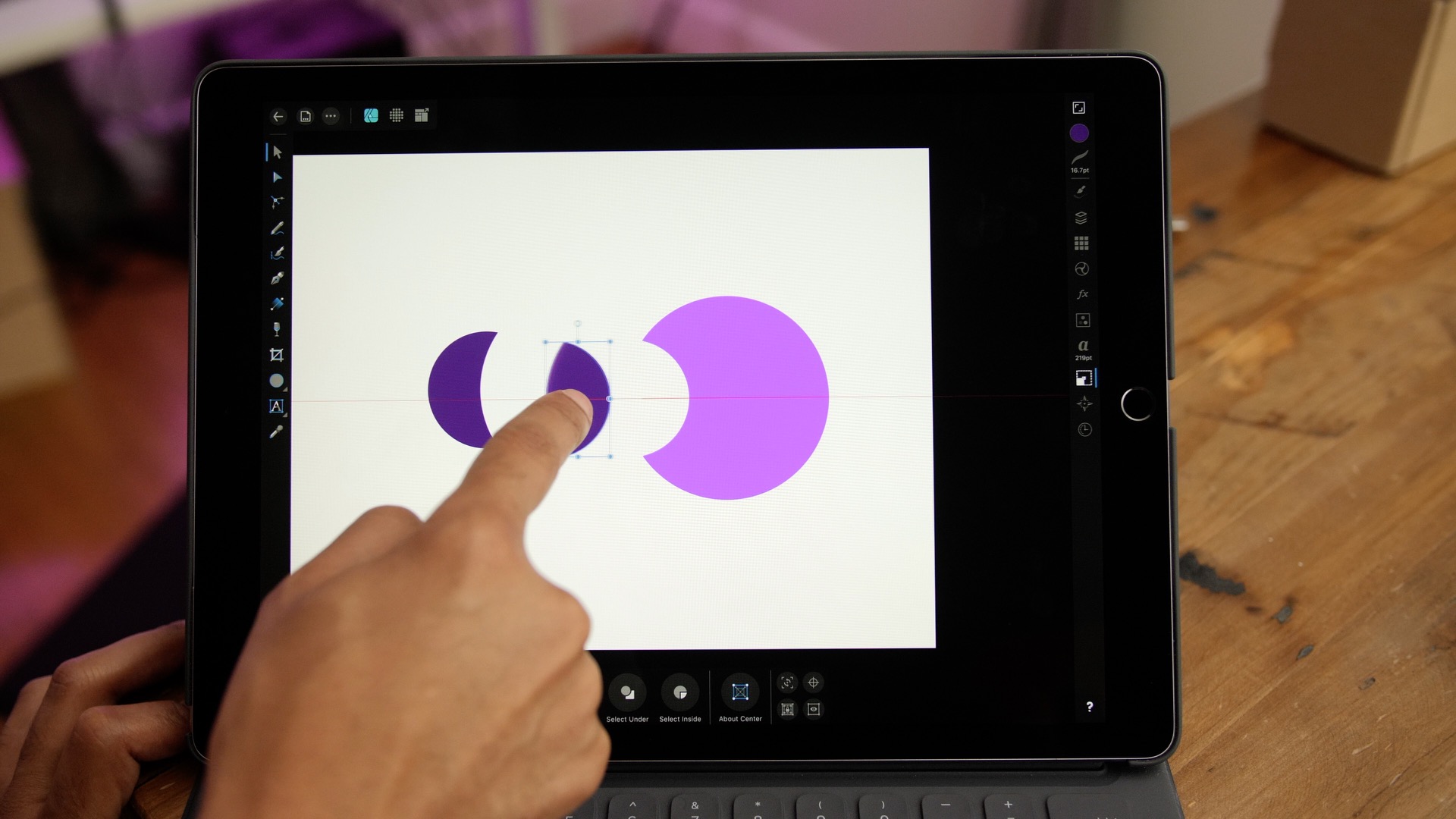 Affinity Designer contains a bevy of export options, affording it the kind of flexibility that graphic artists demand. However, if you just want to quickly export and share your work, you can use the quick drag and drop export functionality found inside the Export panel. 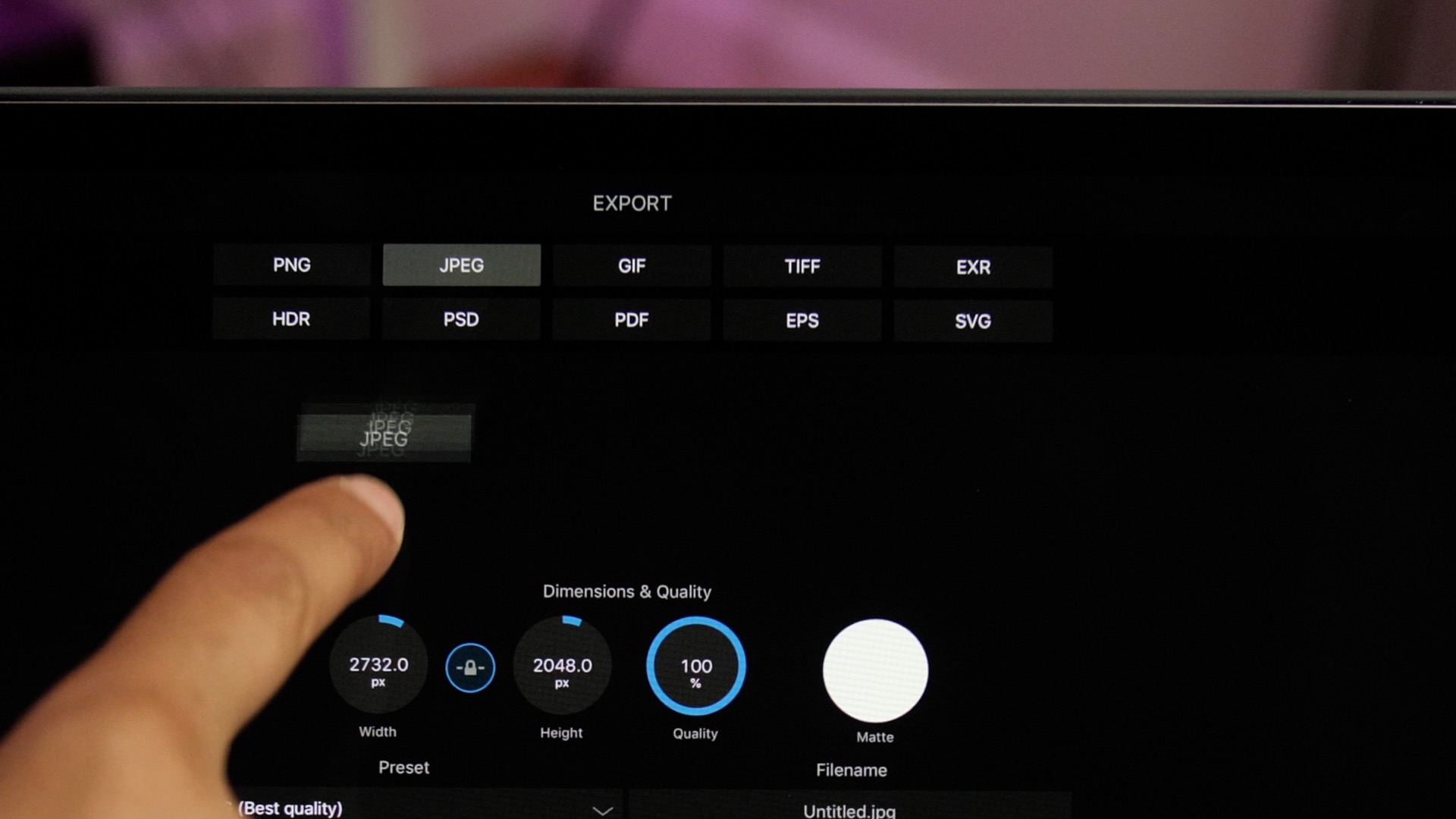 Simply drag and drop a desired file type into a valid location, such as an email, and Affinity Designer will quickly export your work for immediate sharing.

Like its sister app, Affinity Photo, Affinity Designer for iPad is a huge get for iPad users who desire professional apps with little to no compromises. I find that it serves as a great companion app to use with the Mac version of Affinity Designer while away from the office.

As you can see from our video walkthrough, developer Serif has focused heavily on incorporating gesture-based control in Affinity Designer. There is definitely a bit of a learning curve, but once you get the basic mechanics and UI down, you’ll likely agree that this is the best illustration app available on iPad.

To celebrate the launch of Designer for iPad, Serif has dropped the price of all four of its popular apps:

Yep, for less than $100, you can get the entire Affinity suite on both iPad and Mac, which many people agree are bonafide subscription-free replacements for Adobe Photoshop and Adobe Illustrator. What are your thoughts on Affinity Designer? Do you have any specific tips to share? Sound off in the comments below with your observations.