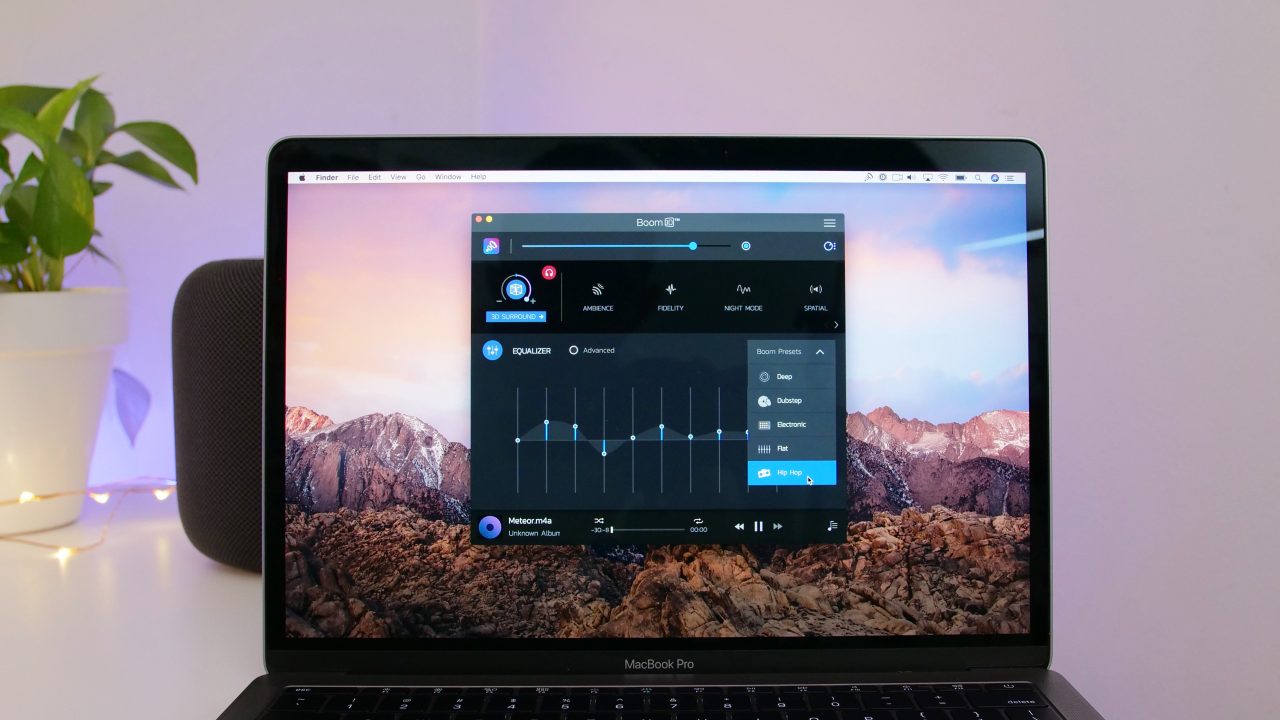 Boom 3D is a popular volume booster and equalizer app for Mac that offers fine-grained control over volume and audio output settings either system-wide or on a per app basis.

9to5 readers can currently get 30% off Boom3D for Mac w/ code 9TO5BOOM to celebrate the 1 year anniversary. Or start with a 7-day free trial.

In addition to customization over your audio output system-wide, Boom3D includes a patent-pending 3D Surround Sound technology that creates an immersive virtual surround sound experience that works with any existing headphones. The app also optionally includes a built-in audio player so you can use it for your audio library and a companion iOS app to continue the experience on your iPhone. Here’s how it works.

If you’re trying to squeeze more out of your speakers or headphones, Boom3D gives Mac users control over much more than macOS does natively. You can manually adjust your audio on a per-app basis or system-wide, or just stick to the app’s presets to quickly get more punch, a deeper or richer sound, or just more bass.

For users that want to manually fine-tune their audio, the app allows you to craft your own EQ settings and apply them on a per app basis or system-wide. The ability to apply to just some apps can come in handy if, for example, you want a bass-heavy experience in music apps but not on the rest of your system.

But you can just as easily apply presets, audio effects and manual tuning system-wide to improve your sound for all audio output on your Mac. 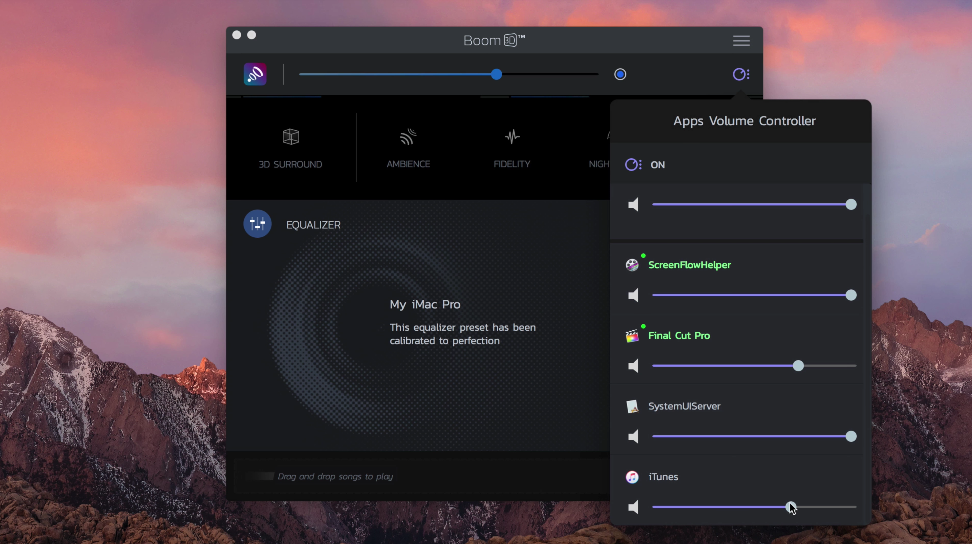 Also included in Boom3D is an intuitive Intensity Slider that makes it easy for anyone with or without experience to fine-tune EQ presets and audio effects to their personal taste.

Starting with OS X 10.10.3 and later, Boom3D has a self-calibration feature that tunes audio specifically for your model of Mac, which allows it to offer an even better experience as opposed to applying the same settings for everyone. 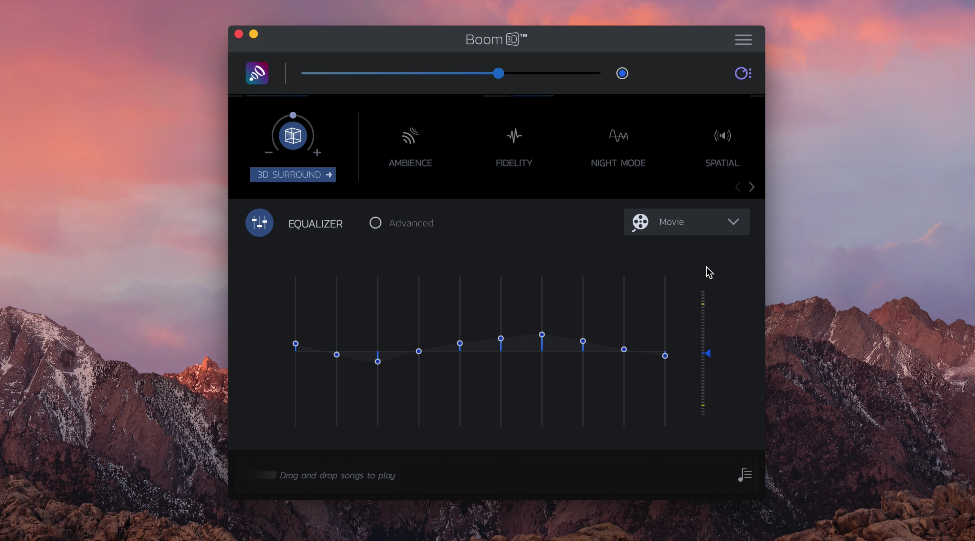 The app’s 3D Surround Sound technology is a setting you can enable separate from the EQ controls and other presets and effects.

The feature replicates a surround sound experience when listening with headphones and it truly is an impressive and fun way to hear your music. There are other apps that have tried to do virtual surround sound with software and some that require special headsets, but Boom3D has managed to impress with how well it works on a wide variety of audio sources and genres of music with just your existing headphones. Of course, it’s something you have to try and hear for yourself.

In addition to using Boom3D for fine-tuning audio system-wide or on a per app basis, the app also includes a built-in mini audio player so you can also use it to store your library of music and audio files. And with a companion iOS music player app you can have a seamless experience with all of your music playing from Boom3D across your devices. 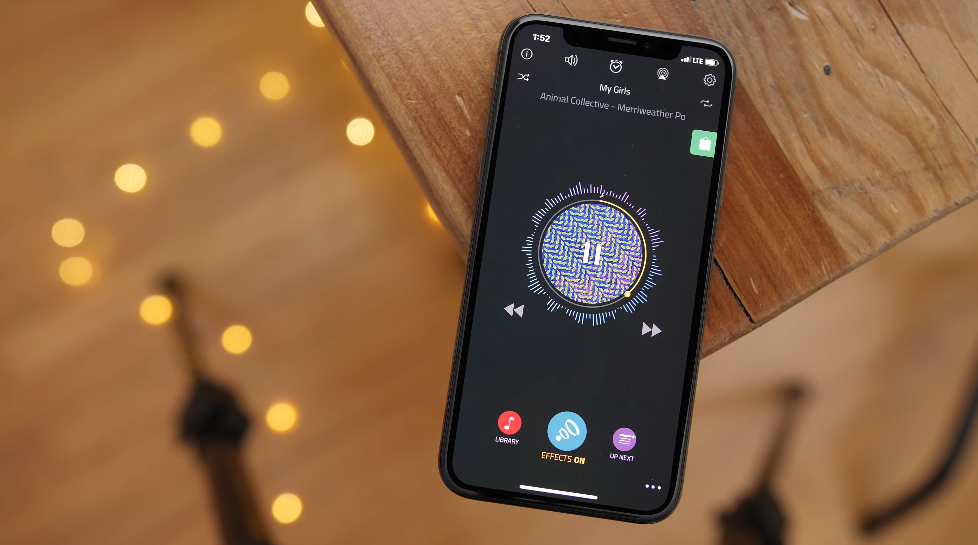 For a cohesive listening experience across platforms, there is the Boom for iOS app. If you are using Boom3D on your Mac for your audio library, the iPhone and iPad app lets you pick up where you left off with access to all of your audio files and EQ, preset and effect settings.
An optional ‘Boom Remote’ app available for iPhone and iPad gives you even more functionality with the ability to control Boom 3D including your Mac’s default volume level, Boom 3D’s Equalizers and Effects right from your iPhone. You can also use the app to access playback controls of Spotify, VLC, QuickTime and iTunes.

Boom3D for Mac has a free trial for 7 days and 9to5 readers can currently get 30% off w/ code 9TO5BOOM to celebrate the app’s 1 year anniversary.