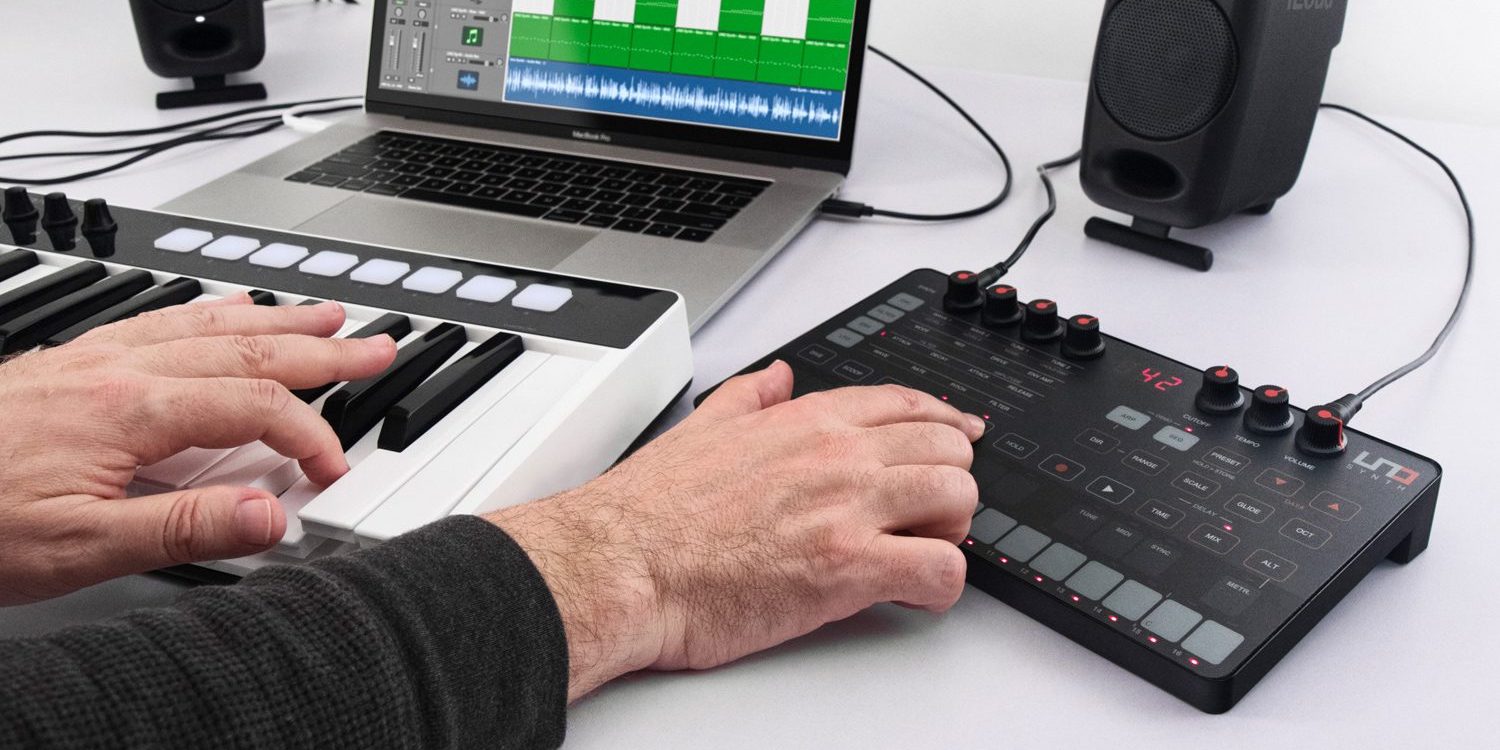 Today it’s all about IK Multimedia’s latest analog synth hardware. IK’s lineup of music production and live sound gear is largely considered to be for those with a budget in mind or as amazing beginner rigs for aspiring producers. The new UNO synth is designed to be just that with an extremely competitive price tag and wide platform compatibility with your existing recording environment. After having the chance to put the portable analog synthesizer to the test over the last couple weeks in some electronic-based music productions and more, it’s time to see what the new IK Multimedia UNO Synth is packing.

IK’s new UNO synth is largely designed around portability and as far as I’m concerned, being a great entry-level, or gateway drug, into the world of analog synth hardware. It doesn’t have all the bells and whistles of some of the more well-known brands, but at $199.99 that is to be expected. The question here is whether or not the UNO synth has enough meat on its bones to warrant a closer look from those looking to get into hardware on a budget and maybe even over indulgent pros with an extra $200 to drop.

The UNO is a small, portable analog synthesizer that is powered via USB or a 4 AA batteries. Immediately upon unboxing the unit, I noticed how light it was and the almost tablet-like shape of the synth. It has a small lip built-in to the frame of the unit so it can sit on your desktop or a tabletop at a convenient angle. For the most part, I’m into the sleek physical shape of the unit and the thin bezel-like framing around the outer perimeter even if I would have preferred a more 3D-like approach to some of those flat front-panel controls. 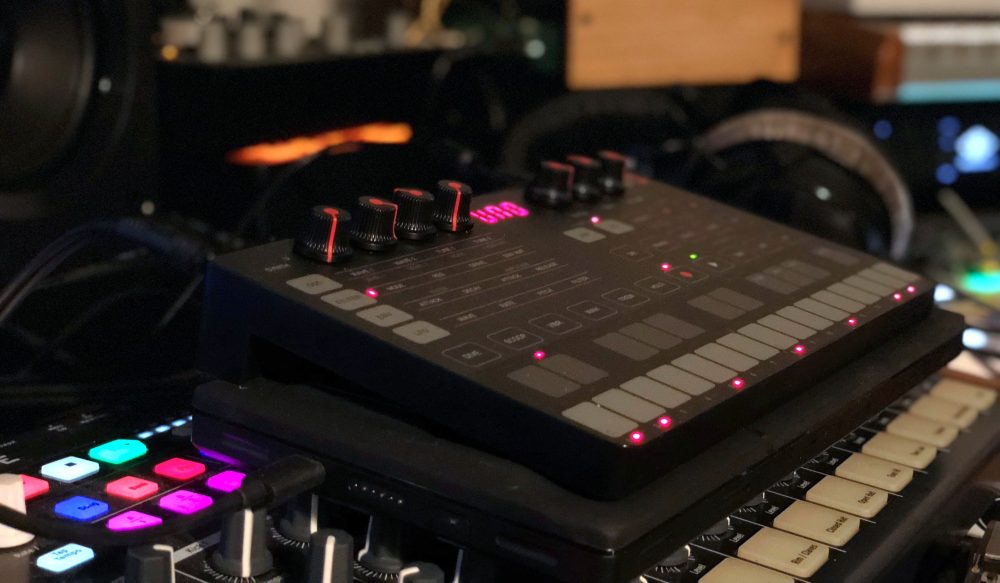 It carries two analog multi waveform oscillators along with a noise generator. The fully resonant, multi-mode filter supports your typical low pass option along with a high pass and band-pass modes. It is a two-pole, 12dB filter with bit of a brassy tone to it. It isn’t as harsh as I would like, but all things considered it out performed my expectations, especially with the available, front panel modulation options and built-in drive control.

UNO has full ADSR filter and amplitude envelopes, although only the attack and release portions are available as front panel controls on the unit itself with the decay and sustain phases left in the companion Mac/iOS editor (more on that below). UNO’s LFO supports a series of wave shapes from sine and square to sample and hold. We get physical controls for the wave selection, rate as well as normalized connections to the oscillator pitch and filter cut-off. 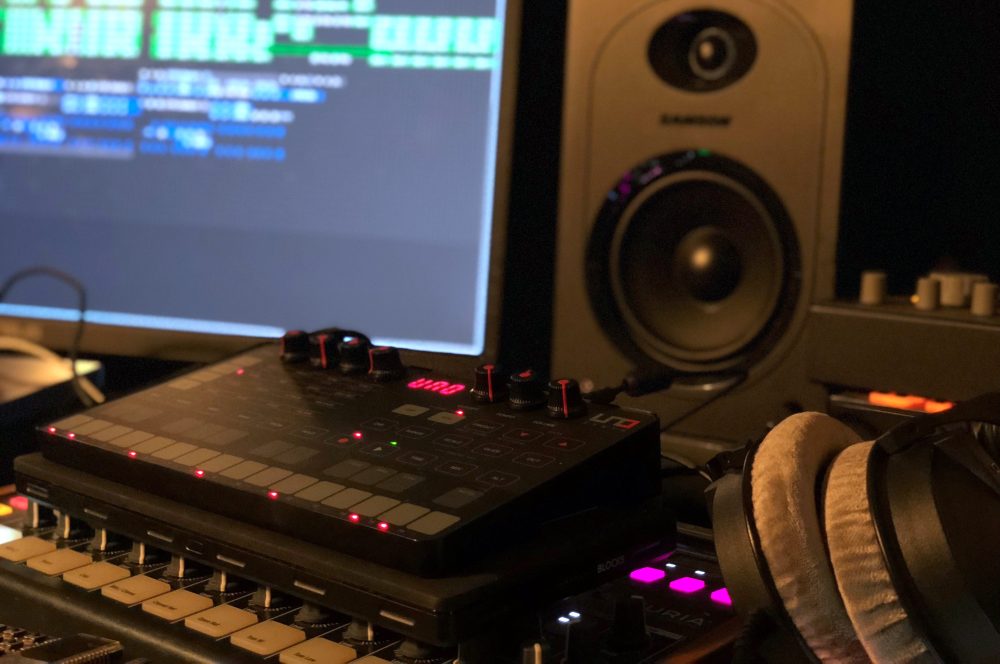 UNO has 6 preset performance controls: Dive, Scoop, Vibrato, Wah, Tremolo, and Hold. A great little feature for beginner synthesists/music makers as well as being a unique option in general, these options offer up simple ways to add interesting pitch bends and nuances to a part or performance. You can think of them as high-level macro controls for preset modulation paths that can be turned on and off as part of a performance with a simple touch of a button.

The vibrato, wah and tremolo are tied to the main LFO setting to some degree but you can dig in a little deeper with them and get into more complex performances via the Mod Wheel section inside the companion software editor. While I personally would have liked to see more typical physical controls for the Pitch Bend and Mod Wheel alongside the Performance controls, these preset style performance options are great for impromptu sketches in combination with the sequencer. They are also fantastic for those just looking to make some crazy synth sounds without diving into sound design all that much.

The sequencer works as expected without being overly robust, but the arpeggiator has loads of playback modes and a four octave range. That’s more than enough juice for your next Stranger Things theme song cover on YouTube. You’ll also find a nice built-in delay unit which really gives this thing a lot of mileage. Anyone with a couple of hardware synths and some guitar pedals knows how much fun a delay unit can be attached to a hardware analog synth and UNO has you covered. 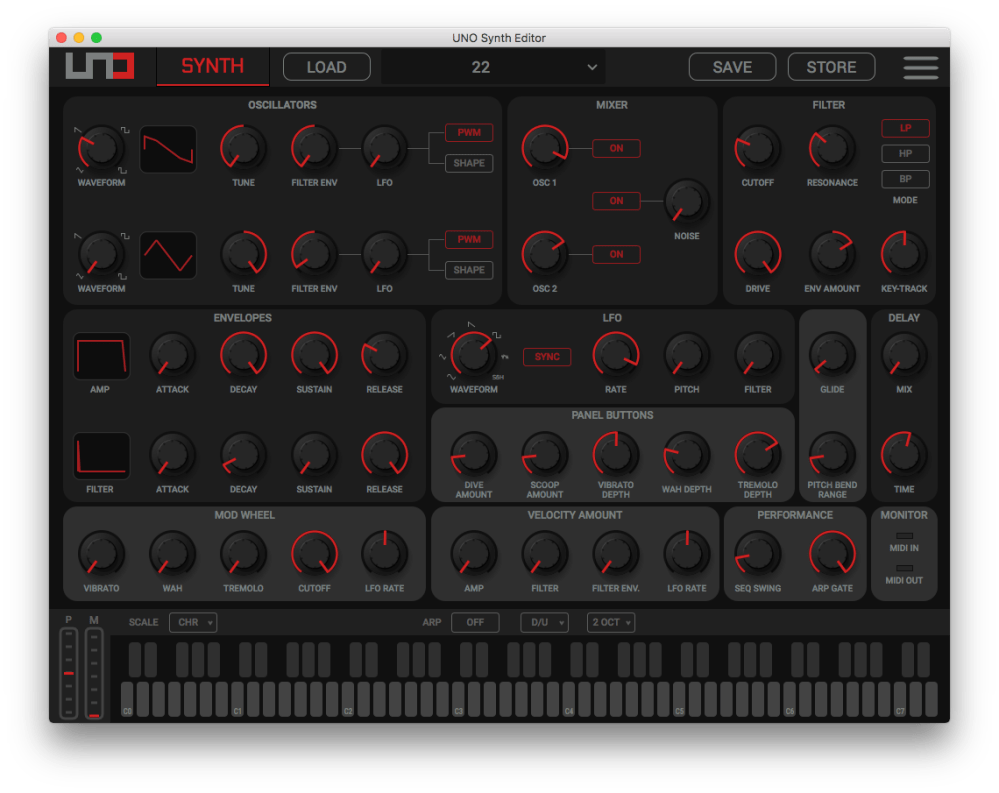 UNO is completely compatible with your Mac and iOS DAW setup. I was able to get it loaded up as an External MIDI Instrument inside of Logic within seconds of connecting the synth to my computer and downloading the free Editor app. It essentially works the same way just about all big name hardware synths with MIDI do. That means you can record and send MIDI performances from a track in Logic out to your UNO Synth and back again, easily integrating it into your productions. You can get more details how the External MIDI Instrument plug-in works inside of Logic Pro X right here.

You can create patches and store as many as 100 of them on the physical unit. But you can create as many presets as you want, store them on your computer and then “upload” the most pertinent 100 of them to the unit depending on the application at hand as well. 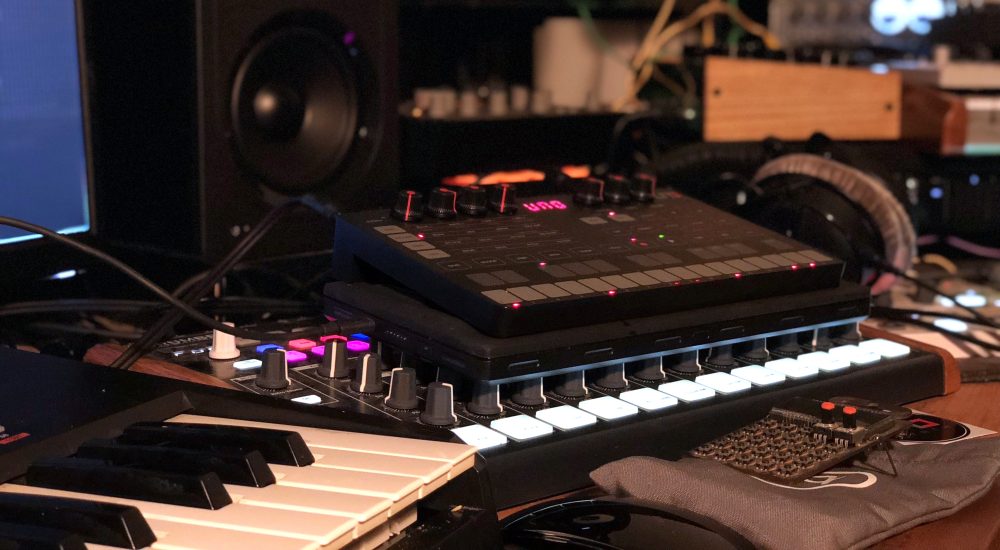 After having UNO integrated in to my Mac Pro battle station for a couple of weeks now, I can easily say it sounds a lot better than I thought it would. The modulation options and overall controls are a little bit limited for someone who already has more expensive analog hardware in their collection, but all things considered, I’m impressed at $200. Any experienced synth player is certainly going to have all kinds of suggestions on what’s missing and what could make it better, but as far as I’m concerned, it hits all the major points beginners need to get a handle on.

The filter sounds quite good and the overall compatibility with Mac and iOS DAW setups was on par as any of the big names in the space. Those performance buttons are great for beginners and scale keyboard option can help out in that regard as well. You can lock the normally chromatic keyboard to various scales which can be great for finding new ideas and the like no matter how experienced you are.

I’m not in love with the feel of the flat design on most of the front-panel toggle switches and buttons, but everything is quick, responsive and works just fine. The multi-mode knobs along the top of the UI are quite robust and won’t be falling off anytime soon with normal wear and tear.

It always nice to have knob-per function style layouts on hardware synths, but these kinds of things drive the cost of the unit up significantly and IK has implemented a tidy multi-function system on the top panel. The free UNO Synth Editor app offers up some of the additional features and controls IK couldn’t squeeze on the front panel as physical controls. Considering the price here, I think IK did a good job getting as much as possible in physical form, but it would have been nice to see the Oscillator Shape and Pulse Width modulation sources easily accessible inside the LFO section on the actual unit.

I would suggest that IK’s new UNO synth might actually be one of, if not the best introductory options for those looking to dive into hardware instruments. In some cases, when computer producers try to bring their creativity outside of the box with hardware like UNO, things don’t always pan out the way they would like. Whether it be the few extra steps it might take to get the synth into your MP3 or having to stray away from those beloved Software synths, it just doesn’t end up being as practical as it sounds sometimes. Having said all that, if you’re on the fence in that regard, UNO is an extremely affordable and solid sounding analog instrument to figure it all out.